The election for the successor to incumbent Rodrigo Duterte is scheduled for May 2022. In theory, there is considerable uncertainty and a lot riding on the outcome of the election for investors. But, in practice, while there will be no shortage of drama, there is likely quite low investment risk. Apart from valuation, of course, external factors such as Covid, commodity prices, remittances and US-China relations are likely to play a bigger role in how the investment case evolves.

The President of the Philippines is an unusually powerful position by the standards of most multi-party republics in the emerging and frontier markets. Although there is a single-term limit, the range of executive powers relative to the legislature and, at least in name, to the military is rare. In this Presidential system, politics is dominated by personalities more than political parties.

With less than a year to go, there is no politician who has both signaled their ambition to contest the election and garners high opinion poll scores. The voter base of those in favour of another term under someone resembling Duterte and those wishing for something different could both be split by multiple candidates.

However, the investment risk associated with the election is low because economic policy is not a key debate. The Philippines, like most others in Asia, does not have the same polarisation between left and right as seen across LatAm. All candidates, of course, promise a higher-growth, more equitable economic future, but there appears little difference on the path to get there. Even Duterte's own populist targeting of big corporates at the start of 2020 did not last long and was likely, at least partly, motivated by settling political scores. Overall, the stuttering reforms on tax and upgrade of infrastructure should survive the next election.

Issues like domestic security and foreign relations tend to draw more debate. Duterte's successor may not persist with authoritarian measures on domestic security but will have no option but to continue walking the tightrope between the US and China.

Potential candidates in May 2022

Four of the top five politicians who scored highest in the Pulse Asia poll of voter intentions in February-March 2021 likely all represent a continuation of the substance of Duterte's domestic policies, if not his personal style and rhetoric: reform of tax, upgrade of infrastructure, emphasis on security:

The only politician with a double-digit percentage score and not closely aligned with Rodrigo Duterte is Grace Poe (12%). She was rival candidate to Rodrigo Duterte in the 2016 election, finishing in third place, with 21% of the vote. However, during the Rodrigo Duterte presidential term, she has voted in favour of his tax reform and extension of martial law in the Mindanao region.

The candidate who might represent the biggest break from Rodrigo Duterte's policies is Leni Robredo, member of the Liberal Party and leader of the Opposition in Congress. However, her opinion poll score was merely 7%. 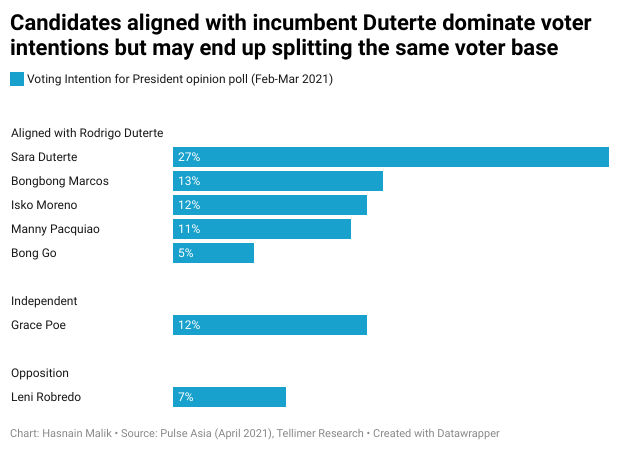 Candidates for the May 2022 presidential election are due to formally file their nomination in October 2021.

As seen before, potential candidates are coy in their public statements on their intentions, usually deflecting, for example, Sara Duterte's insistence that she wishes to focus on local politics in Davao City until the 2034 election or Manny Pacquiao's remarks that the ruling party he heads should focus on Covid and Manila power cuts rather than the 2022 election.

In his inimitable manner, incumbent Rodrigo Duterte has also sought publicly to downplay his daughter's candidacy by stating that the presidency is "not for a woman" and by tacitly authorising his spokesperson, Harry Roque, to claim that he might support at least five of the potential candidates (including Sara Duterte and Manny Pacquiao). 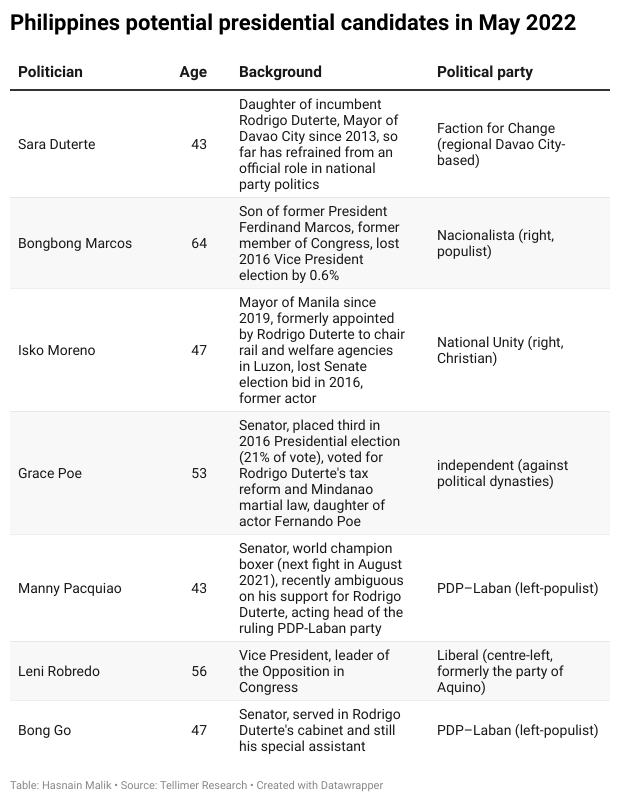 United they stand, divided they fall

One the key factors behind Rodrigo Duterte's victory in 2016 (with 39.0%) was the division of the voter base of his opposition between two opponents, Mar Roxas (23.5%) and Grace Poe (21.4%), who ended up placing second and third, respectively. Roxas was from the Liberal party of the 2010-16 incumbent "PNoy" Benigno Aquino, and Poe was an independent, but both appealed to a similar constituency.

Prior to 2022, there is a tentative effort underway to unite the anti-Duterte spectrum behind a single presidential candidate, via the 1Sambayan ("one nation") coalition, launched on 18 March 2021 by former Supreme Court Justice Antonio Carpio. But the coalition does not as resemble (or even promise to resemble) a unified, organised, campaign-ready, electorally credible front (particularly to the youth demographic segment, in a country where merely 5% of the population is over 65 years old).

However, there are divisions between the potential candidates more aligned to Duterte, either because they hail from different political parties, or they have differing views on whether to run on a joint ticket which includes Rodrigo Duterte for Vice President, or they rely to differing degrees on an explicit endorsement as his successor from Rodrigo Duterte (eg Pacquiao can perhaps contest without this given his personal popularity).

In a plurality-based vote, a little unity or disunity can go a long way to determining the ultimate winner. Rodrigo Duterte-aligned candidates appear collectively to have the larger vote bank but they may end up splitting it in the manner of the Liberal-independent camp of 2016.

Presidential powers more than most

De jure Presidential powers in the Philippines are greater than in most of the republics in Africa, Asia, Europe or LatAm. The President:

Election for a single 6-year term

Philippines Presidents are elected for a 6-year term with a single-term limit. 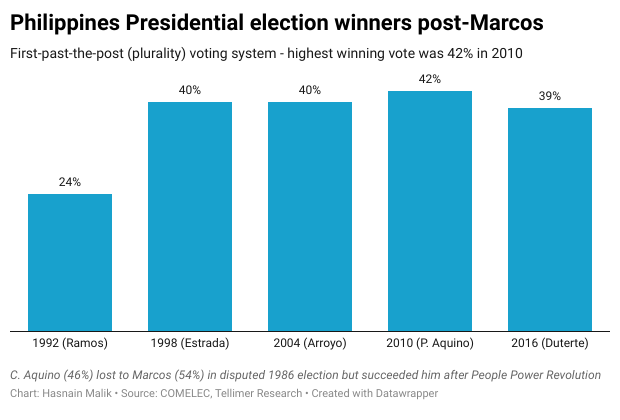 Philippines: Walking the tightrope between US and China in the South China Sea, May 2021

Philippines FDI reform: 5 charts show why it is needed, March 2021

China manufacturing is irreplaceable but India and other Asians can win share, June 2020