Peru's central bank hikes again but knives are out for Castillo

Peru's central bank raised its policy rate again yesterday with a 50bps hike to 5%, as expected, taking the rate to its highest level since the GFC. It was the Central Reserve Bank of Peru's (BCRP) tenth consecutive rate increase since it began its post-Covid tightening cycle in August 2021, and the ninth successive 50bps increase (the first hike was 25bps), resulting in a cumulative increase to date of 475bps. 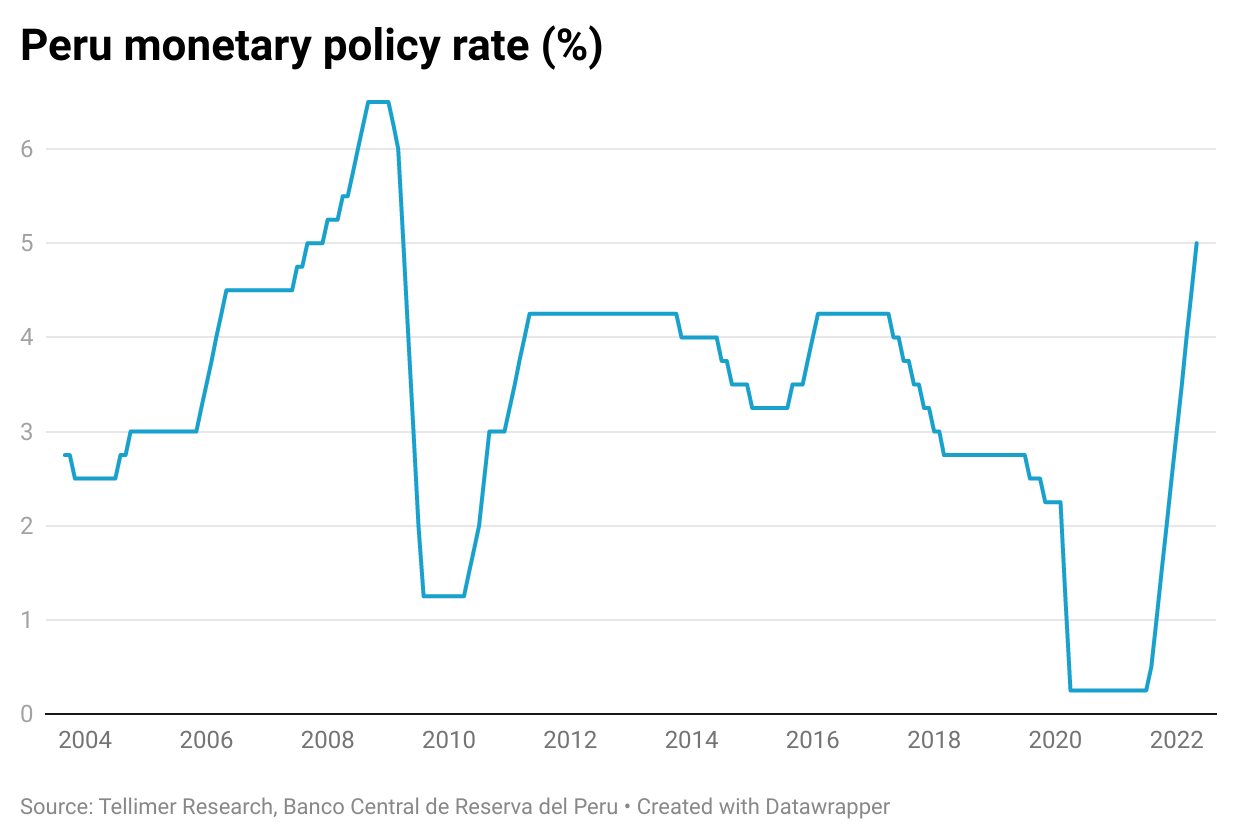 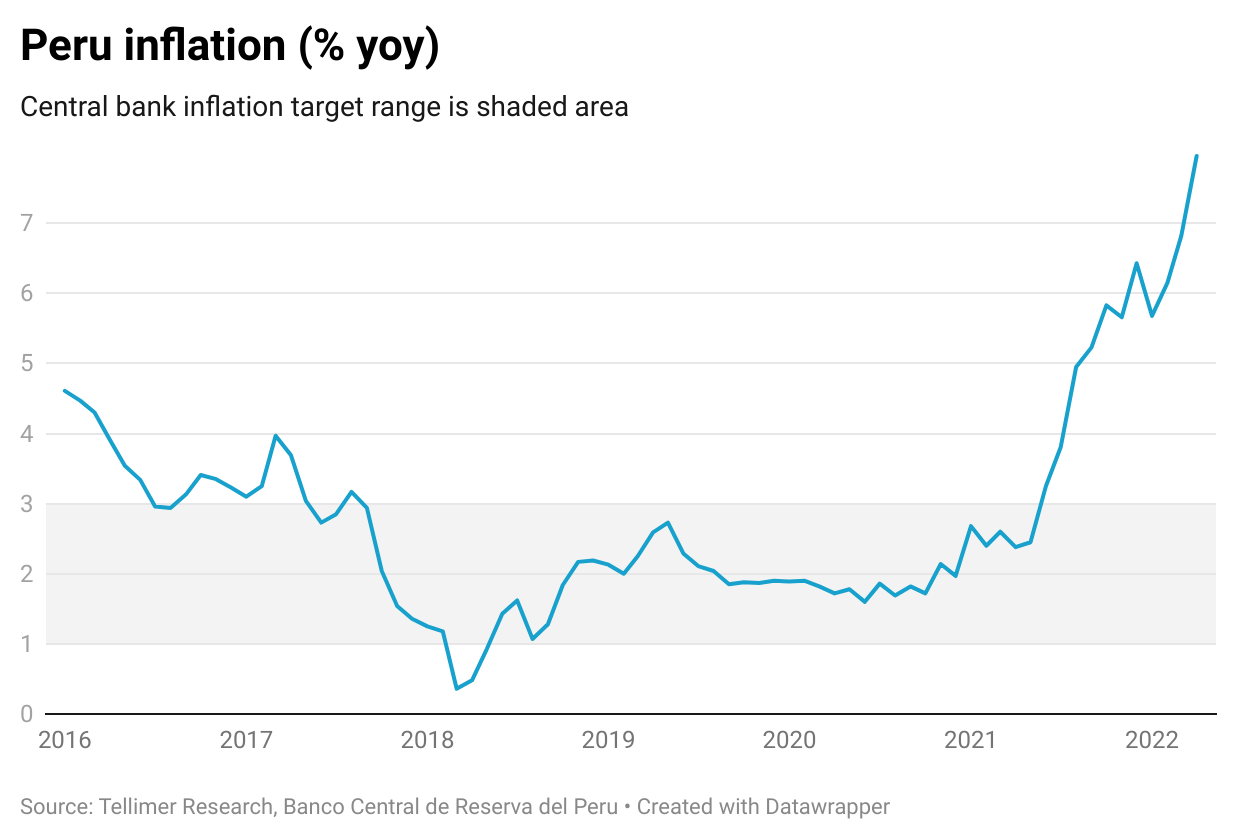 The central bank's statement attributed the rise in inflation to the "upsurge of significant increases in international food and fuel prices". The central bank noted, however, that core inflation had also increased from 3.46% yoy in March to 3.81% in April, so may be wary of second round effects and the risk of de-anchoring inflation expectations. One-year-ahead expected inflation increased from 4.39% to 4.62% between March and April, it said.

The central bank expects inflation to return to the target range between the second and the third quarters of next year, with the downward path in annual inflation rates beginning next July, as transitory pressures (exchange rate and international fuel and grain prices) begin to recede and with output still below potential.

Still, further rate hikes cannot be discounted as inflation looks likely to continue rising in the near term and real interest rates, despite narrowing a bit, remain in negative territory (about -300bps currently). More details of central bank thinking may be revealed in the next inflation report (due on 17 June). Inflation has increased by about 200bps since the last inflation report (for March), exceeding already the peak seen in the baseline forecast, while the policy interest rate has risen by 100bps.

Indeed, the IMF warned in its recent 2022 Article IV that "further tightening of monetary policy is warranted in the short term". It saw the current stance of monetary policy as expansionary, with the real neutral interest rate estimated at 1.5%.

However, rising inflation comes against an extremely challenging political situation, domestically, for President Pedro Castillo. Higher inflation, higher interest rates and slowing growth will only add to his woes. The IMF expect real GDP growth to slow to 3% this year, down from the Covid-induced bounce-back of 13.3% growth last year. Growth this year has been revised down from 4.6% in the October 2021 WEO, pre-Ukraine war, in part due to the impact of monetary tightening in response to the global inflation shock.

Castillo hasn't been in office for even a year yet, and lacking a majority in Congress, his administration has been dogged by scandals and allegations of corruption, he has suffered two impeachment attempts (the first last December, the second in March 2022), overseen numerous cabinet reshuffles (at least four), faced mining strikes and public protests against rising prices, some of which have turned into violent clashes with the police, prompting the government to introduce a curfew (quickly rescinded) and a state of emergency in some areas, and he has seemingly lost the support of his own party (Peru Libre) amid reports that some parliamentarians want to cut short the presidential term from five to two years in order to hold new general elections next year. Castillo has also proposed a constitutional referendum in October. It is not clear if it will happen, and some of his supporters may welcome it, but it could also pose a distraction to governance and add to existing political tensions.

Some of his woes are no doubt the government's own doing, although Peru politics being what it is, it might also reflect an orchestrated campaign against him by the traditional elite.

As a result, President Castillo's approval rating has plummeted. It has fallen to just 25% according to one poll, although it was never very high to start with, and nearly two thirds of the population say he should resign. However, this also reflects the deep malaise in Peru politics. Congress has a disapproval rating of an all-time high of 79%. Simply put, even if Castillo is removed, it is not clear things will be any better.

Yet despite all this, the country's strong policy framework, track record and policy buffers should help to shield the economy from downside risks (a point noted by the IMF in its 2022 Article IV). Whether this is enough to attract (or retain) foreign investors is, however, unclear.

Peru has low public debt (projected at 34% of GDP this year by the IMF), a low overall fiscal deficit (2.6% projected this year), modest current account deficit (1.5% projected this year), and high reserves' coverage (GIR of US$76bn at end-April, according to the central bank, which is some 32% of GDP – which means net debt is minimal). A two-year US$11bn precautionary contingent credit line with the IMF, under its Flexible Credit Line (FCL) arrangement, is however due to expire on 27 May. It is not clear yet if this will be renewed, but in any case, Peru (Baa1/BBB/BBB) still – despite the intense political pressure – has access to the international market (and a deep domestic market) at reasonable cost.

The yield on Peru's 10yr dollar bond is c4.6%, with a z-spread of 189bps (and a cash price of US$87), having risen by c180bps this year, for a total return YTD of -11.6% vs -14.5% for the Bloomberg EM Aggregate Index (as of cob 12 May). On the surface, such valuations may even begin to look attractive, and ability and willingness to pay are both very strong, but we think sentiment is hostage to political developments and there doesn't seem any end in sight on this front.

Meanwhile, the sol has even appreciated this year (+6.4% against the US dollar YTD, helping to reverse some of its losses last year), the third best performing EM currency on Bloomberg's currency ranker, helped perhaps by still high copper prices (despite price weakness), although high copper prices aren't any use if you cannot get it out the ground, while its strength belies China's slowdown (Peru's main trade partner) and Peru's own political challenges. It may reflect some degree of central bank intervention and help to keep inflation under control. 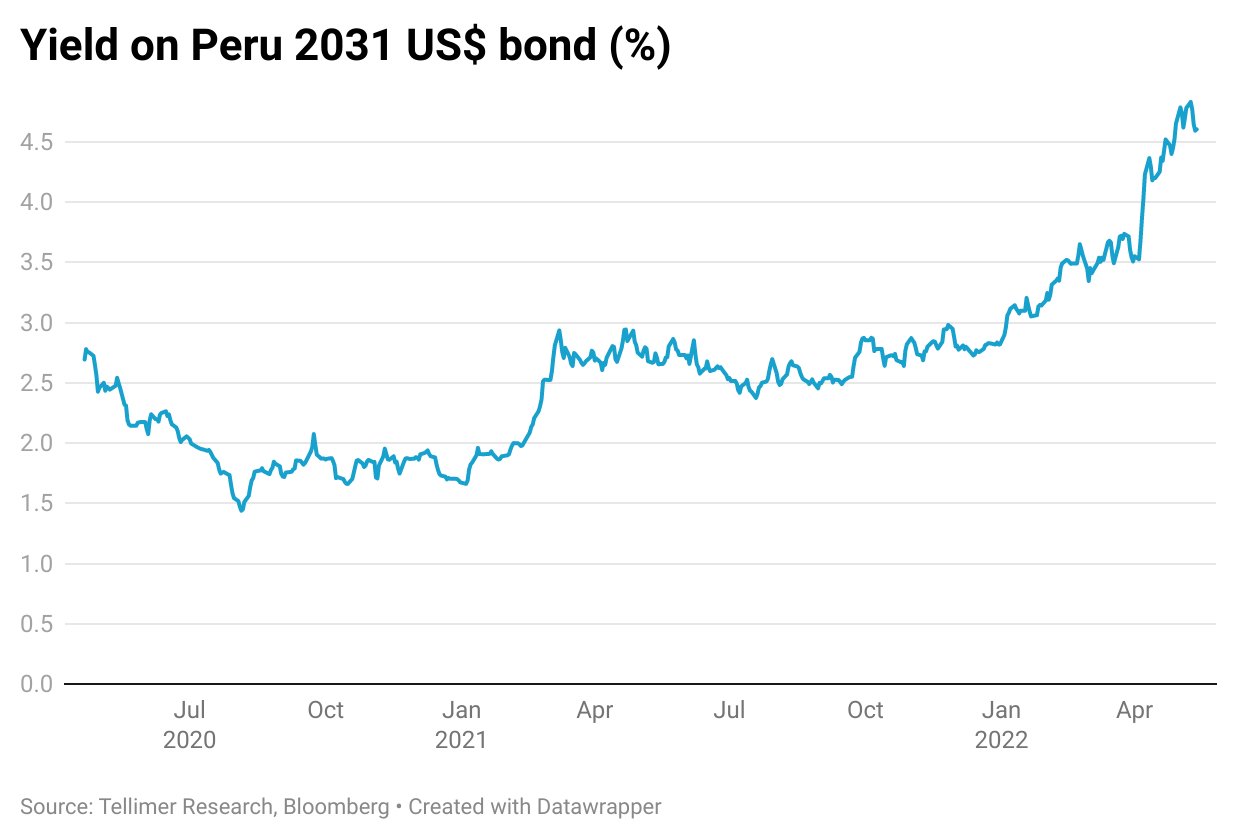