Peru's Congressional election on 26 January 2020 is unlikely to act as a positive catalyst for macroeconomic growth or the equity market (which is valued broadly in line with the historic average).

This election is unlikely to:

In Peru, the directly elected President appoints the Prime Minister from the single-house Congress and the PM is subject to ad hoc votes of confidence in Congress. Incumbent President Vizcarra took over after the resignation (on corruption charges) of predecessor Kuczynski in March 2018. Every President of Peru in living memory has been embroiled in corruption investigations, as have many current and past members of the judiciary and Congress.

President Vizcarra's attempts to implement popular anti-corruption reforms (e.g. removing immunity of members of Congress, restoring an upper house, cracking down on illicit party financing) have been obstructed by Congress (led by the largest party, Popular Force under the leadership of Keiko Fujimori). This culminated in President Vizcarra's dissolution of Congress in September 2019 and these early elections.

Since then, the opposition leader Keiko Fujimori has been released from pre-trial detention (the investigation into alleged corruption continues), approval ratings for President Vizcarra have dropped (as the boost he enjoyed after the dissolution of Congress gave way to discontent over his perceived lean towards the mining companies in dealing with protests with a heavier hand), and the legal challenge to President Vizcarra's dissolution was unsuccessful (enabling this election to proceed).

No clear favourite emerged from the IPSOS poll of voting intentions in December 2019. Almost 35% of respondents indicated they would spoil their ballots (a high number of spoiled ballots actually reduces the threshold for the minimum percentage of votes needed to win a single seat, thereby likely increasing the prospect of more smaller parties). The largest party in Congress prior to its dissolution, Keiko Fujimori's Popular Force, polled 8% (compared to nearly 40% of seats). Out of over 20 registered parties, none polled more than 11%.

Low government debt and fiscal deficit and high FX reserves imply low sovereign and FX rate risk. But growth likely remains modest (in the range of 3%), absent a major improvement in the prices of copper and gold (respectively c30% and 15% of exports), and vulnerable to the sort of spike in protests (albeit for different reasons) seen in neighbouring Ecuador and Chile.

Peru's largest equities are not at compelling valuations, like their LatAm peers

Equities, measured by the MSCI All Peru Capped (with a c30% weight each for banks and mining), are up 4% in the past year (versus up 6% for MSCI EM LatAm and up 9% for MSCI FEM). MSCI All Peru is valued in line with the 5-year median trailing price/book (1.6x for 7% ROE) and close to the 5-year median forward price/earnings (16x, for 30% earnings growth, versus 15x).

The banks (Credicorp, Intercorp, BBVA) all meet two of the criteria in our top-down stock screen (trailing price/earnings below 15x and dividend yields above 3%).

This index valuation is not compelling in our view, but then neither is the regional peer group. The LatAm small emerging markets (Argentina, Chile, Colombia, Peru) in our coverage are among our fundamentally least favourite (exposed to low commodity prices, protest disruption or potential shifts to less market-friendly policies, and not compellingly cheap). We prefer the cheaper commodity exporters of Africa and the reforming or manufacturing export-led Asian markets. But the bias of LatAm equity indices to easily accessible ADRs and the large pool of dedicated and aged LatAm funds tends to reduce the barriers to re-engagement by institutional investors in the event of an increase in global risk appetite. 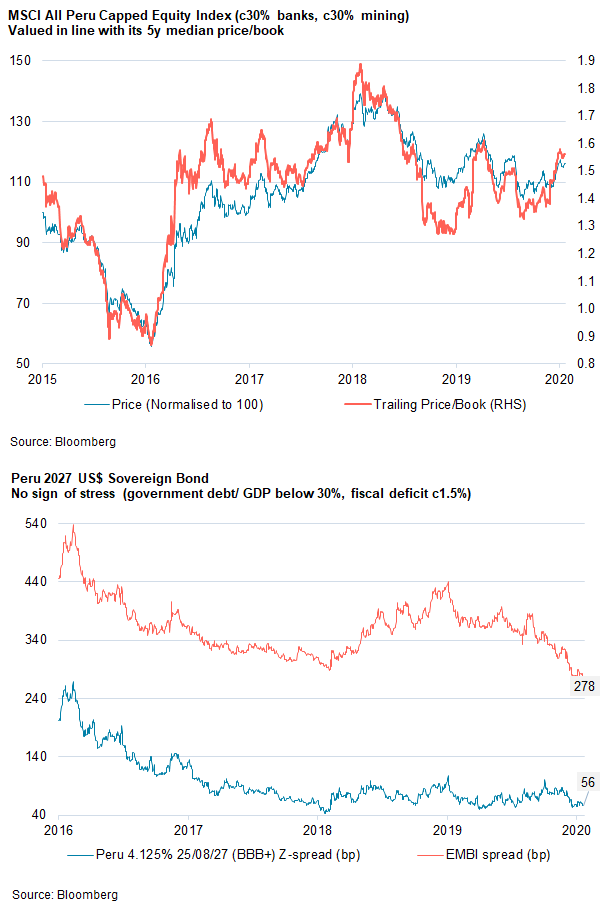 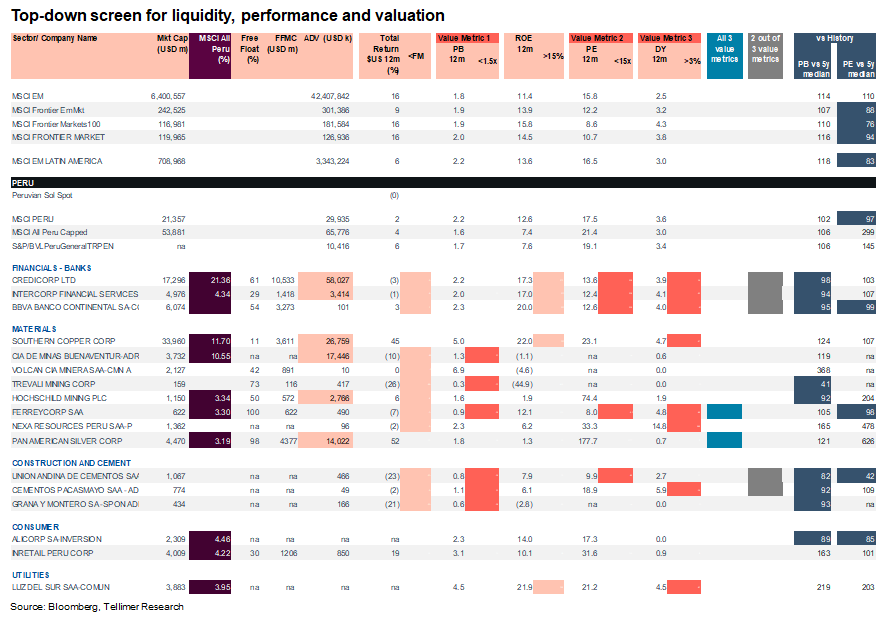