Castillo has tried to reassure that he will not do to Peru's Copper what Chavez did to Venezuela's Oil – Peru accounts for 12% of global Copper output. But the market consensus distrusts his words: equities fell 8%, FX is down 2%, local yields up 40bp.

Ultimately, more important than the words of Castillo or his Free Peru party's manifesto is the 56% of Congress controlled by the four largest right-wing parties; that should be the key constraint on any Chavismo pivot. Overall, we do not expect a wild shift leftwards, partly because we expect the relationship between the President and the Congress in Peru to remain dysfunctional. The market consensus clearly needs to see evidence of this first.

Fujimori alleges irregularities, with little specific evidence, perhaps partly concerned that she will not enjoy presidential immunity from imprisonment should the corruption charges she faces lead to a conviction. She may also be hoping for a bump in her tally as all of the diaspora votes are counted (about 4% of the total).

While we acknowledge the potential for further weakness in the near term, we regard US$ bonds and equities as relatively more attractive than local currency bonds. Copper should continue to be driven by demand-led factors rather than any potential supply shock from Peru.

The market reaction (sell-off of off 8% in equities and 2% currency, and weaker bonds, with local currency yields up 40bp) over the course of Monday, suggests a Castillo victory wasn’t fully discounted. This came after the markets’ preferred candidate Fujimori managed to reverse the deficit after the April 2021 first round and early results following Sunday’s elections gave her a slight advantage, although this was skewed by the urban bias of the earliest votes counted, and overturned in Castillo’s favour as the vote count increased during the day, bringing local asset prices down with it.

There is clearly a risk that Peru bonds, equities, and currency weaken further in the wake of a Castillo victory, until or unless he is able to demonstrate a stronger commitment to the maintenance of sound market-based economic policy. He and his team have been trying to reassure markets, but investors are signalling they need action beyond the rhetoric.

Investors are concerned that a Castillo presidency may signal a reverse of the free-market reforms, and strong macroeconomic policies and institutional policy frameworks, that have resulted in the country’s solid macro fundamentals and investment grade rating (A3/BBB+/BBB+), although his appointment last week of former World Bank economist Pedro Francke may help to reassure markets while the right-wing legislature may act as a brake on any deviation from an orthodox policy path.

In the short term, investor focus will be on any dilution to the inflation-targeting regime and credible fiscal framework on which the country’s solid fundamentals have been based, amid the sharp rise in poverty since the onset of the pandemic. Real GDP fell by 11% last year, although the IMF project growth of 8.5% this year.

The winning candidate in Peru's Presidential election run-off, Pedro Castillo, is left-wing and his party's public policy proposals include nationalisation of the mining sector. The disaffection of large sections of Peru's population, particularly in poorer and more rural parts, with its political elite, based on a perception of deep-seated and unresolved corruption following the Odebrecht scandal and the economic disruption from Covid-19 lockdowns in the past year, led to the emergence of the left-wing populist and the Congressional electoral failure of the Contigo party of corruption-tainted former President Pablo Kuczynski and other established parties.

It is ironic that the same uncooperative legislature that derailed former President Martin Vizcarra from pursuing the anti-corruption agenda that grounded his popularity, may prove the ultimate constraint on any impulse to nationalise copper mines under a Castillo presidency. His Free Peru party has the largest seat count but merely 28% of the total, and a combination of the four largest right-leaning parties has 56%. Peru is not an executive Presidential system; legislative power sits with Congress.

This fact probably matters even more than the rhetorical efforts of the Castillo campaign to assuage fears of a Venezuela Chavist-type turn in Peruvian policy on mining and the broader economy (eg on taxes, welfare, constitutional reform in favour of rural rights).

“In no way is he another Hugo Chavez. We don’t want to nationalise the mining and oil industries, or other sectors. We don’t want generalised price controls or a dual foreign-exchange rate or to impose currency controls like Chavez did." Pedro Francke, Economic Advisor to Pedro Castillo, and former economist at World Bank and Peru central bank (3 June 2021)

In addition to these comments, Castillo has publicly stated he will not interfere with the central bank. 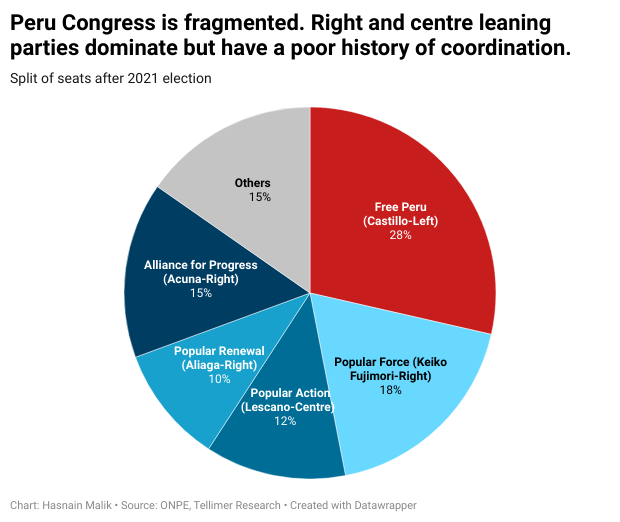 For fixed-income investors seeking Peru exposure, we prefer hard currency bonds, despite their lower yields, over local currency, as the country’s strong external liquidity position and low public debt (35% of GDP) provide a solid cushion to support the US$ bonds and mitigate against policy, currency and governance risks, while providing some upside potential if Castillo exceeds expectations.

Peru ranks 3rd best on our external liquidity scorecard and 5th best on our debt vulnerability scorecard across a range of emerging and frontier markets. Local yields of 5% on the ten-year may not offer sufficient compensation for currency risk, while ten-year US$ yields of 2.8% (z-spread 134bp) may have more limited downside and even offer a bit of value compared to its Investment Grade peers (the '30s have already fallen 10pts this year to par and are only ten points above their post-Covid low).

Peru dollar bonds have underperformed the market this year with a total return of -9.1% compared to -1.8% on the EMBIGD YTD (to 4 June) although they will likely continue to lag until there is greater visibility on policy direction.

Even after yesterday's 8% drop in Peru, given further weakness is likely until Castillo proves market-friendly credentials, Chile looks marginally more attractively valued. Yet, in a buoyant Copper price environment, both are appealing from an emerging and frontier markets perspective.

Peru drove 12% of global copper output in pre-pandemic 2019, similar in size to Saudi or Russia in the oil market. Copper prices may continue their rise because of the demand-led factors, but a major supply shock, similar Venezuela post-Chavez in the oil market, looks far-fetched.

Copper, because it is highly conductive, is an essential input into the renewable energy and electric vehicles sectors, and it is completely recyclable. (Copper is therefore also essential for ESG investors to realise hopes on issues such as CO2 emission reduction.)

The secular growth outlook for these sectors, the expectation of a cyclical rebound in construction, aided by Biden's stimulus in the US, and the partial rotation out of Technology into Commodities, amid higher US yields, has driven copper price to double in the last year, and rise almost 30% ytd. 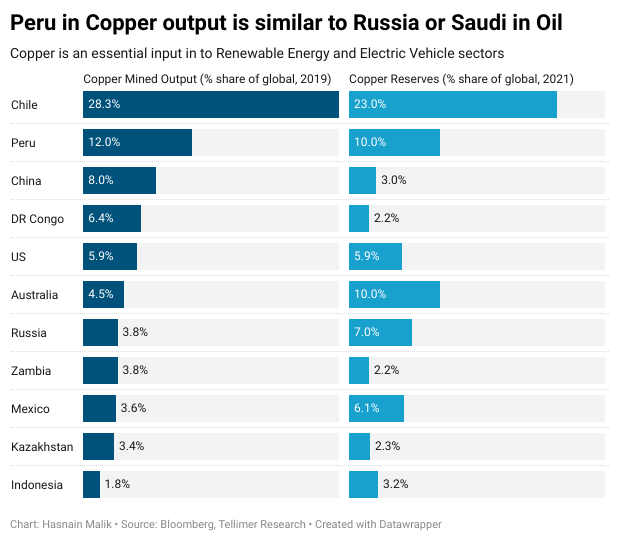 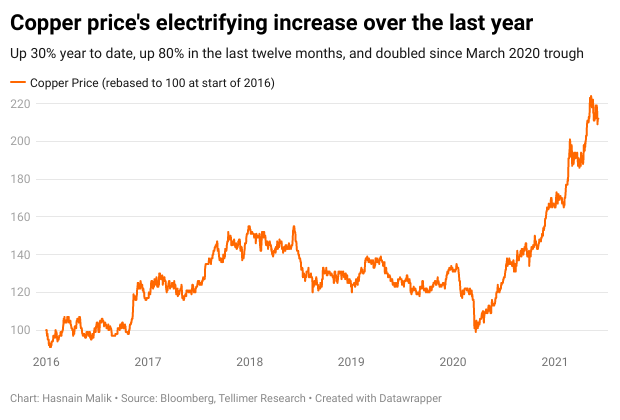