Resilient US labour data yesterday continued to boost expectations that the Fed would persist with its aggressive monetary policy tightening. So long as the scope exists for the Fed to "normalise" monetary policy, they will and, in the process, elicit some strong responses from the markets and other central banks faced with the fallout. A poll conducted by Reuters shows that respondents still anticipate a strong USD well into 2023. That reflects expectations that the Fed has much further to tighten to bring supply and demand within the labour market back into line. In the process, the risk is that the Fed is too focused on a lagging indicator, exerting pressure and damaging the global economy. However, while that might be the ultimate consequence, policy divergence could widen further in the interim. How much more is left to price-in is debatable, but FX traders anticipate that the USD could get even stronger before it reverses. Both the EUR and the GBP reversed off their recent highs in response to the US labour data yesterday, raising the significance of today's weekly jobless claims and tomorrow's US non-farm payrolls. EUR-USD is trading back down to 0.9920 from levels approaching parity, while the GBP is back down to 1.1360.

Uganda: The Bank of Uganda will deliver its latest verdict on its benchmark interest rate today. The BoU raised its benchmark interest rate for the third straight meeting in August and signalled its willingness to hike rates further, even at the cost of economic growth, if inflation is not reigned in. At 10% in September, headline inflation is significantly above the bank’s target of 5%, and therefore risks exist that the BoU may persist with its policy tightening approach.

Africa: As part of a $1bn investment plan for the African Continent, Google yesterday said that it will set up an African cloud service that will allow users to store their data in-country. According to an official from Google Cloud Africa, the cloud infrastructure will be based in South Africa but will give users the option of where to store their data. African countries have a patchwork of laws on data sovereignty, with some requiring companies to store data within their borders, increasing demand for a more flexible regional cloud service. Google forecasts that the South African cloud region could contribute more than $2.1bn to the country’s economy and support the creation of more than 40,000 jobs by 2030.

Namibia: After completing an Article IV review, the International Monetary Fund forecast the pace of domestic growth to accelerate to 3.2% in 2023. The IMF added that the pace of economic growth will pick up from 3% this year and 2.7% in 2021. According to the IMF, the recovery strengthened in the first half on the back of sustained mining growth and stronger manufacturing activity. Meanwhile, average inflation is expected to rise to 6.4% this year and begin to moderate in 2023. The current account deficit is expected to remain large, financed by FDI inflows in oil and gas and one-time transactions, while the fiscal deficit is expected to narrow, supported by strengthened tax revenues and fiscal consolidation measures. The IMF also urged the government to preserve social spending and growth-supporting public investment and mitigate the impact of higher food and fuel prices on the poorest.

Egypt: Official data from the Central Bank of Egypt showed that net international reserves edged higher for the first time since April. Specifically, net international reserves came in at $33.2bn in September from $33.1bn in August. The increase in the international reserves level will likely provide some measure of relief to a country wrestling with the spillover effects of war in Ukraine. It is also worth noting that as part of measures to reverse some of the capital outflow experienced as a result of the war, Egypt is in talks with the International Monetary Fund for support and is also working on attracting more foreign direct investment, including plans to offer parts of state-owned enterprises, and boosting exports.

Ethiopia: In a bid to end a two-year civil war, the Ethiopian government has reportedly accepted an invitation by the African Union for peace talks. A copy of the letter seen by Bloomberg indicates that Ethiopia’s government and the dissident Tigray fighter have been invited for talks in South Africa on October 8. The conflict between Ethiopian government forces and dissident Tigrayan fighters resumed in August after a five-month lull. The renewed fighting threatens to hinder efforts by Ethiopia’s government to improve relations with international lenders as it awaits an International Monetary Fund loan amid efforts to restructure its debt.

Oil: As was expected over the last few days, OPEC+ announced a massive cut to production for November, decreasing output by 2mn barrels per day between its members. This has kept the oil market supported, with Brent trading near $93.50 per barrel this morning and WTI near $88 per barrel when looking at the front-month contracts. Speaking after the announcement was made, Saudi’s energy minister said that the real world drop in output would be around 1mn barrels per day as some countries are already producing below their baseline quotas. Other estimates, however, have pegged the decline at around 880k barrels per day. Nevertheless, this is still a significant cut and will keep prices supported over the coming weeks. The issue here is that with prices remaining high, it could have an impact on demand going forward, given how countries around the world are already starting to suffer from an economic slowdown that has partly been fuelled by high energy prices.

Forex: Devaluation risks for the naira are acute

The CBN has intervened in the FX market to support an overvalued naira that has lost more than 2% year-to-date against the USD as demand for dollars continues to outweigh supply. On a PPP basis, the naira is overvalued by over 18%. Historically, when the naira has been overvalued by around 20%, it has been followed by a sharp devaluation as seen in the adjacent chart. The devaluations by the CBN have also come at interesting times. In 2016 the CBN banned the sale of dollars to exchange bureaus to avoid depleting Nigeria's reserves after a sharp drop in oil prices. Meanwhile, in 2020  the devaluation coincided with the coronavirus pandemic outbreak, which hit global demand for oil, while foreign exchange earnings came under pressure after oil prices plunged following a disagreement between Russia and Saudi Arabia over a deeper production cut.

As dollar scarcity worsens, foreign exchange reserves and inflows continue to fall, risks continue to build for the CBN to devalue its currency again to narrow the gap between the official parallel market. If history is anything to go by, the risk of a sharp devaluation in the naira is considerable. 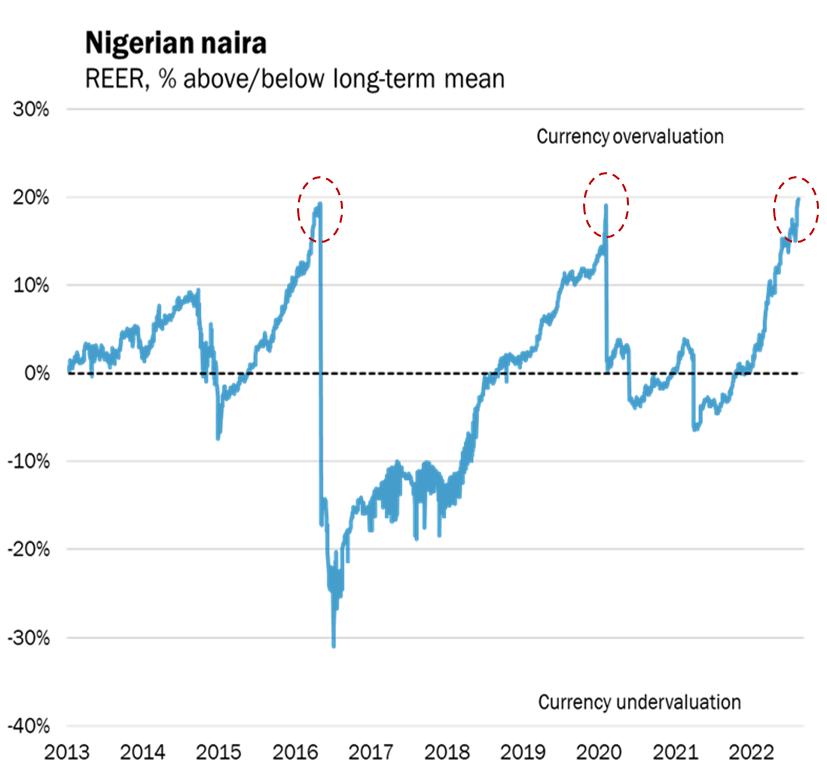 Much of the pain across emerging markets this year has been linked to just a handful of factors, one being the sharp appreciation in the US dollar, which has resulted in a broad-based sell of in emerging and frontier market currencies. Currency weakness has been one of the main headwinds driving inflation pressures and compounding fiscal risks, particularly in countries with significant exposure to foreign currency-denominated debt.

In Africa, currencies such as the Ghanaian cedi and the Egyptian pound have been hit the hardest by the persistent appreciation in the greenback. For context, the cedi has lost in excess of 40% against the USD this year, while the Egyptian pound is down more than 20%. The currency weakness has resulted in a marked jump in debt servicing costs of dollar-denominated debt. Note that when countries borrow in dollars through the Eurobond market, they have to pay interest in dollars.

Given that more than 50% of Ghana’s outstanding bonds are denominated in USD, the currency weakness has resulted in a significant increase in overall debt servicing costs for Ghana and has pushed the country towards a fiscal cliff. While the impact of the currency weakness on Egypt’s debt servicing cost is significant, it is modest in comparison to Ghana, with around 16% of Egypt’s outstanding bonds denominated in USD. Should the dollar strength persist and the Fed remain uber hawkish, fiscal pressures in Ghana and Egypt are expected to remain acute in the months ahead.

Wednesday saw the release of several Sub-Saharan Africa economy-wide PMI reports. Regional economy-wide PMIs were mixed in September, with the headline PMI readings for Uganda, Kenya, Nigeria and Zambia rising during the month, while PMIs in South Africa and Ghana fell. Encouragingly, the SSA average PMI reading rose back into expansionary territory in September, climbing from 49.6 in August to 50.3.

The PMI data provide valuable insight into the relative health of the various private sector economies in SSA. Interestingly, Nigeria’s PMI stands head and shoulders above the rest at 53.7, while the clear laggard is Ghana at 45.6. As highlighted in yesterday’s note, Nigeria’s PMI reading was supported by sharper rises in output and new orders.

Ghana’s private sector meanwhile continues to be dragged down by a number of factors, including currency weakness, which is amplifying cost pressures, and a general reluctance to spend at Ghanaian companies. While business conditions in Ghana are challenging, companies were optimistic about their expectations for output growth. There were hopes that the recent price pressures would stabilise, and demand would eventually improve.

It is also worth zooming on Kenya, given the sharp rise in the country’s PMI reading. Specifically, Kenya’s PMI reading jumped from 44.2 in August to 51.7 in September, which marks the first time the gauge has been above the 50-point neutral mark in six months. Businesses cited the easing of political uncertainty post the election and recovering demand as two of the key factors behind the move. While the sharp rise in PMI is encouraging, businesses flagged a sharp rise in cost pressures following the removal of the fuel subsidy. 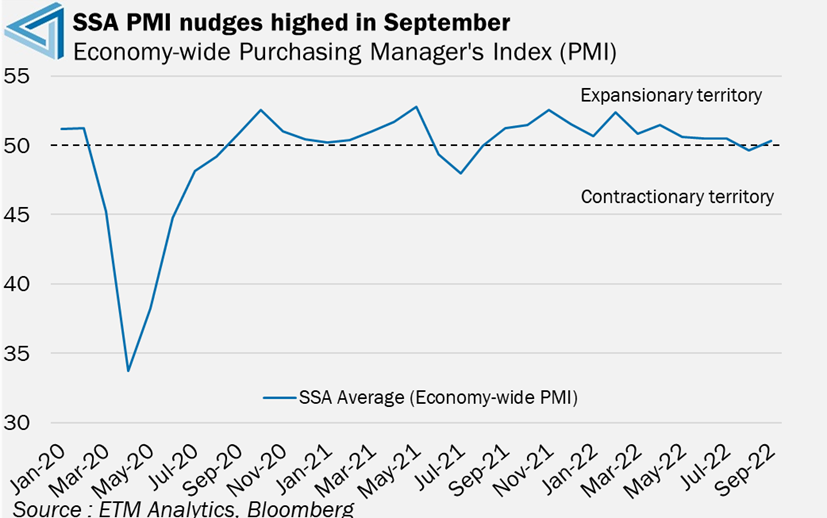