The Paris Club yesterday provided an update on its implementation of the final extension of DSSI, the third and final round of relief under this initiative, and which is due to finish at the end of this year. It states that, to date, 32 countries have requested to benefit from the last round of cashflow relief under DSSI ("final DSSI"), which runs from 1 July-31 December this year, of which, 19 have already signed an agreement with the Paris Club (which we already knew from the Paris Club press releases published at the time).

The total deferred amount (cashflow savings) for these 19 beneficiary countries under final DSSI is estimated to be US$918mn. The amounts by country, and total, are something we didn't know (they are not published at the time of the agreement) but the figures are not surprising based on earlier rounds of relief. Four countries account for 90% of the total (Angola, Cameroon, Kenya, Pakistan), and one (Pakistan) nearly 60% alone.

We think, of these latest beneficiaries, most had already participated in earlier rounds of the DSSI. We think 17 of them had previously benefited from the second round of DSSI, under its first extension ("extended DSSI"), which ran through the first half of this year; the exceptions being Fiji and Kyrgyz Republic. It is not clear to us why these two got the final extension in the third round but not the second (we think Fiji missed the first two rounds while Kyrgyz Republic participated in the initial first round). In all, 34 countries benefited from Paris Club relief in extended DSSI in H1 2021.

Paris Club creditors have therefore deferred a total of US$4.5bn to date under DSSI, since its start, covering 42 countries (comprising US$2.5bn in the initial round of DSSI, which ran from May-December 2020, US$1bn from extended DSSI in H1 2021, and US$1bn from final DSSI in H2 2021). However, as we've noted before, DSSI has provided limited relief, with total savings somewhat lower than the official sector expected at the outset. 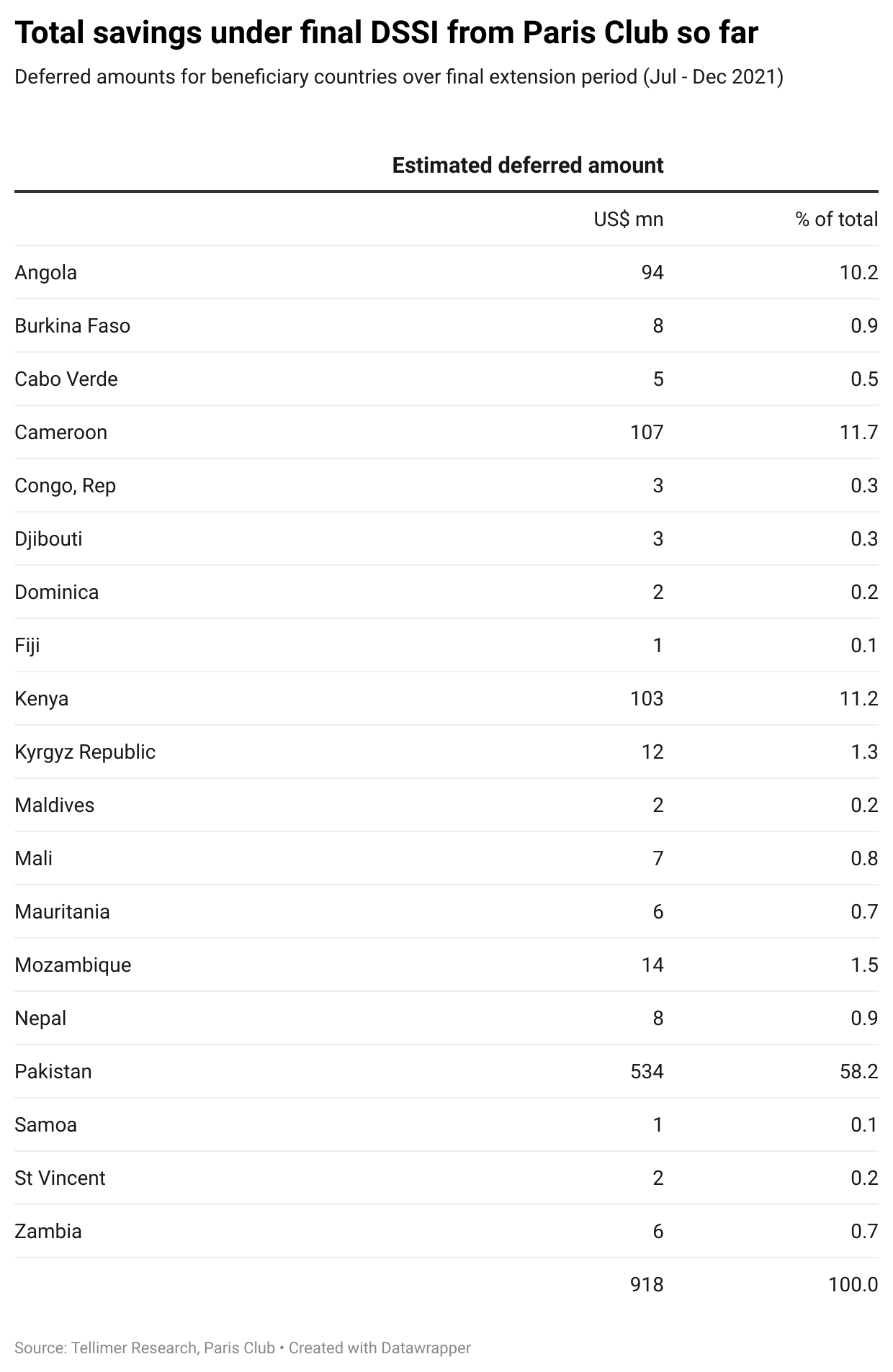 Attention shifts to the Common Framework

With DSSI all but finished (it is due to end at the end of this year), the Paris Club also reiterated its strong commitment to the implementation of the Common Framework, the successor initiative designed to help eligible countries deal with debt problems (liquidity and solvency) on a permanent basis. So far, as is well known, three countries (Chad, Ethiopia, Zambia) have made a formal request for a Common Framework treatment.

The Paris Club welcomed the ongoing work of the creditor committees for Chad and Ethiopia. It urged Chad's private creditors and other official bilateral creditors to "commit without delay to negotiate a debt treatment on terms at least as favourable". Paris Club creditors also noted they stand ready to support Zambia's request for a debt treatment.

All three Common Framework candidates are however different, moving at different speeds and have different issues, and it is difficult to know exactly where each one is in the process and how long they will take to be resolved. Chad seems to be the furthest along, in terms of the process, and at least has an IMF programme waiting in the wings, but we are still the best part of 10 months in. However, the uniqueness of its commercial debt may mean it has little precedent for the other two cases with eurobonds. Meanwhile, in Zambia, which has seen the least progress to date, there is new momentum (and optimism) coming after the election in August of a new president. The crucial 2022 budget and an investor call this week followed an IMF virtual visit last month, although IMF programme discussions have yet to begin.

We summarise below our characterisation of where we are in the process for each one below. 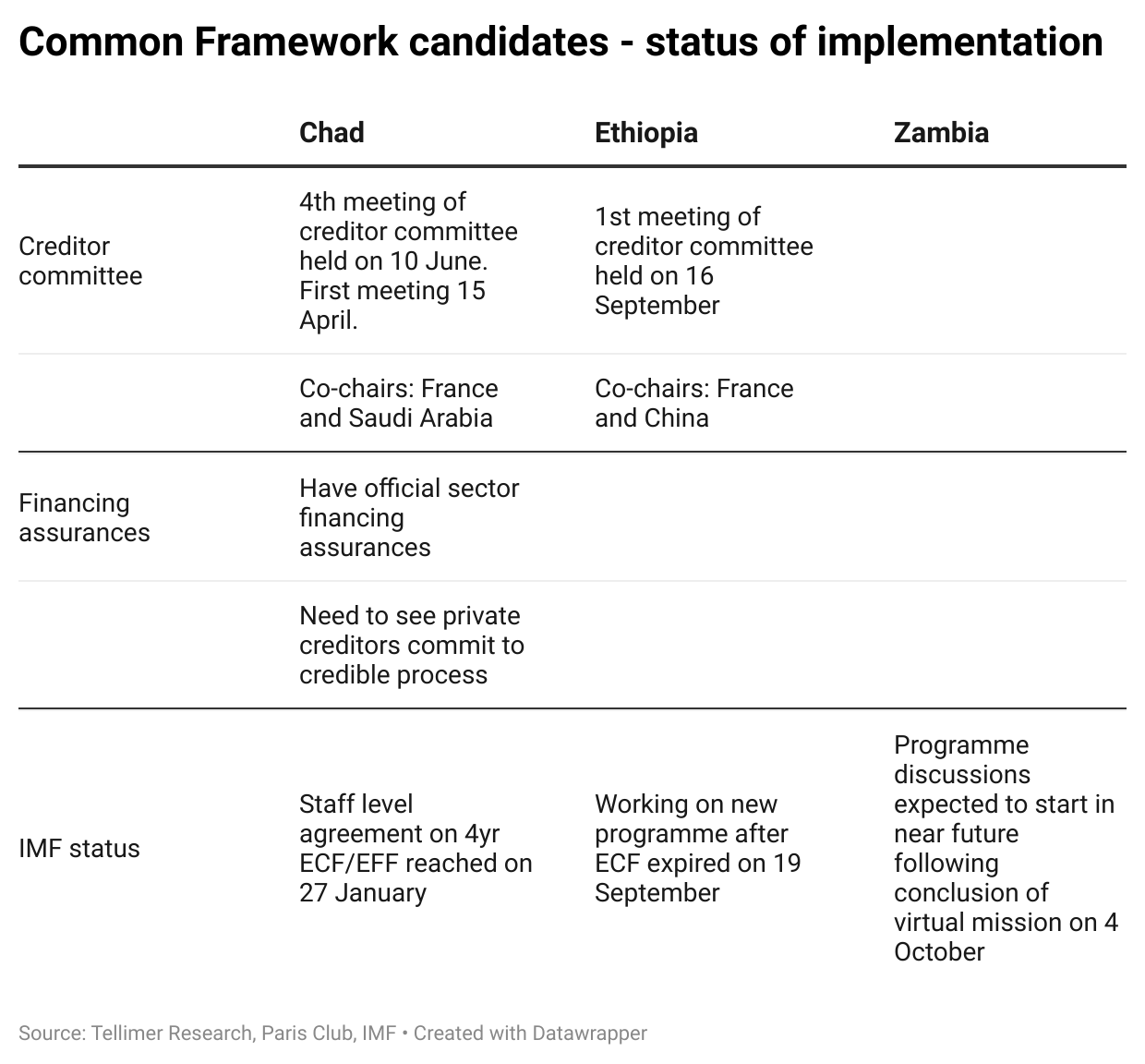