The State Bank of Pakistan (SBP) held its policy rate at 15% yesterday, in line with the projections of 40 of the 43 analysts surveyed by Bloomberg (three projected cuts of 25-50bps). With Pakistan’s catastrophic floods projected to reduce growth and increase inflation, the decision to hold “strikes an appropriate balance between managing inflation and maintaining growth in the wake of the floods", according to the accompanying monetary policy committee (MPC) statement.

Notably, inflation declined sharply from 27.3% yoy in August to 23.2% in September. However, the decline was driven by a sharp decrease in administered energy prices due to the government’s decision to reintroduce power subsidies for selected export sectors. As such, the inflation contribution from energy prices dropped by 5.6pp in September, while the food contribution rose by 1.2pp and the core contribution by 0.3pp, pointing to a continued increase in underlying price pressures.

While work is still underway to evaluate the macro impact of the floods, yesterday’s MPC meeting provided an overview of the SBP’s preliminary assessment. Its growth forecast for FY 23 has been cut to 2% from a previous projection of 3-4%, inflation is projected to be “slightly higher” than the previous 18-20% forecast, and the current account forecast is unchanged from the previous 3% of GDP projection.

The latter two forecasts are surprisingly benign. The SBP claims that the impact of the floods on food prices and imports will be offset by lower non-food commodity prices and administrative prices, resulting in only a slight uptick in inflation and an unchanged current account deficit. This contradicts our previous view that the current account deficit would likely widen at the margin.

That said, recent data has been encouraging, with the current account deficit contracting sharply from US$2.2bn in June to US$1.2bn in July and US$700m in August. Remittances have also been relatively stable at cUS$2.5bn, and the SBP projects an uptick in the months ahead as expats transfer more money to help family members impacted by the floods.

Importantly, the SBP says that it has secured an additional US$4bn of financing commitments since the floods (US$1.5bn from the ADB, US$500m from AIIB, US$1bn from the World Bank, and US $1bn from UN), with discussions ongoing for even more support. The SBP claims that this will keep reserves on track to exceed US$16bn by the end of FY 23, in line with the target under its IMF programme.

The SBP also expects the government will remain on its fiscal consolidation path, with the floods likely to result in a slight increase in spending. Overall, the SBP says that the IMF programme is still on track and that discussions are ongoing into revisions to the IMF’s macro framework and targets to account for the floods, although it remains to be seen how much flexibility will ultimately be given.

As we’ve highlighted before, Pakistan’s ability to cobble together additional external funding to plug the likely increase in the external financing gap from the floods and to re-work its IMF programme to account for the impact of the floods without pushing it irreparably off track are essential if Pakistan is to continue servicing its debt and avoid a balance of payments crisis.

While the IMF is likely to grant some flexibility on Pakistan’s headline targets, it is not clear whether it will be willing to tolerate slippage on Pakistan’s key reform promises. From this perspective, the government’s decision to reintroduce power subsidies for five key export sectors by setting the tariff at PKR19.9/unit until July 2023 is concerning. The policy is projected to cost PKR90-100bn (0.1% of GDP), so it does not completely derail Pakistan’s budget, but as a key policy pillar of the IMF programme the failure to remove power subsidies as agreed could be a sticking point in the ongoing discussions.

The focus on PKR stability by newly appointed Finance Minister Ishaq Dar could also be problematic, with the currency appreciating by 10% since it peaked at 240/US$ on 21 September and Dar saying that it will continue to appreciate to below 200/US$. The SBP says that appreciation has been driven by improved sentiment and a crackdown on speculation in the parallel market, and that there has been no direct intervention by the SBP. However, if pressure on the currency resumes and the government tries to resist it via either moral suasion or direct intervention, this could also derail the IMF programme and prevent the currency from absorbing any flood-related external shocks, likely leading to a balance of payments crisis.

Taking account of these developments, Moody’s lowered Pakistan’s credit rating to Caa1 last week. Finance Minister Dar criticised the decision, saying that Pakistan is committed to meeting its external bond obligations on time and in full, including the US$1bn Sukuk maturing on 5 December. The government also dropped its recent request to seek debt relief from the Paris Club in a bid to restore market confidence. Pakistan’s eurobonds had dropped sharply following the request despite assurances from the government it was only asking for relief from official creditors, reflecting concerns that private creditors would nonetheless be asked by official creditors to provide comparable relief.

Indeed, we had shared that particular concern. With the Paris Club placing increased emphasis on avoiding the 'free rider problem' that existed during the DSSI, whereby non-Paris Club bilaterals and private creditors failed to provide comparable relief (limited as it was), it is unlikely that the Paris Club would have provided additional relief without demanding comparable relief from Pakistan’s other external creditors. If the Paris Club communicated this type of sentiment to the government, that could be the reason why the request for relief was withdrawn.

That said, Pakistan is not out of the woods yet. There is still a risk that the IMF, in the process of reformulating Pakistan’s programme, concludes that a larger post-flood external financing gap cannot be plugged by Pakistan’s funding pipeline and that debt is therefore unsustainable without a restructuring. Even if the government’s willingness to pay remains high, it would be moot if Pakistan cannot cobble together enough new funding to meet its large external financing needs and/or, relatedly, if the IMF concludes that Pakistan’s debt is unsustainable.

The risk of default is more than fully priced into Pakistan’s eurobonds, with the ‘31s now trading at cUS$37 versus an estimated recovery value of US$53-71 at a 12% exit yield. The tone from the SBP after yesterday’s MPC meeting and recent rhetoric from the government affirming Pakistan’s commitment to service its external obligations is encouraging but, ultimately, ability to pay will trump willingness if Pakistan is not able to plug its external funding gap, and the new policy course outlined by Finance Minister Dar will make it even more difficult to avoid a crisis.

Pakistan’s US$1bn Sukuk maturing on 5 December has dropped sharply to reflect a greater risk of default, falling by c10pts since 22 September. This has prompted the government to discuss the possibility of buying it back at a discount ahead of the due date. However, if Pakistan’s official creditors conclude that floods and associated reform slippage have made it impossible to avoid a default beyond the near term, then drawing on the SBP’s scarce US$8bn stockpile of FX reserves to retire the US$1bn Sukuk would amount to throwing good money after bad.

Although we do not have a formal recommendation on Pakistan’s Sukuk bonds, the c40pt gap between the December ’22 Sukuk and April ’24 eurobond seems excessively large and likely needs to narrow further until there is more clarity on Pakistan’s plans to navigate out of the current crisis and whether or not its bilateral and multilateral partners are willing to support those efforts without a more holistic restructuring of Pakistan’s debt. 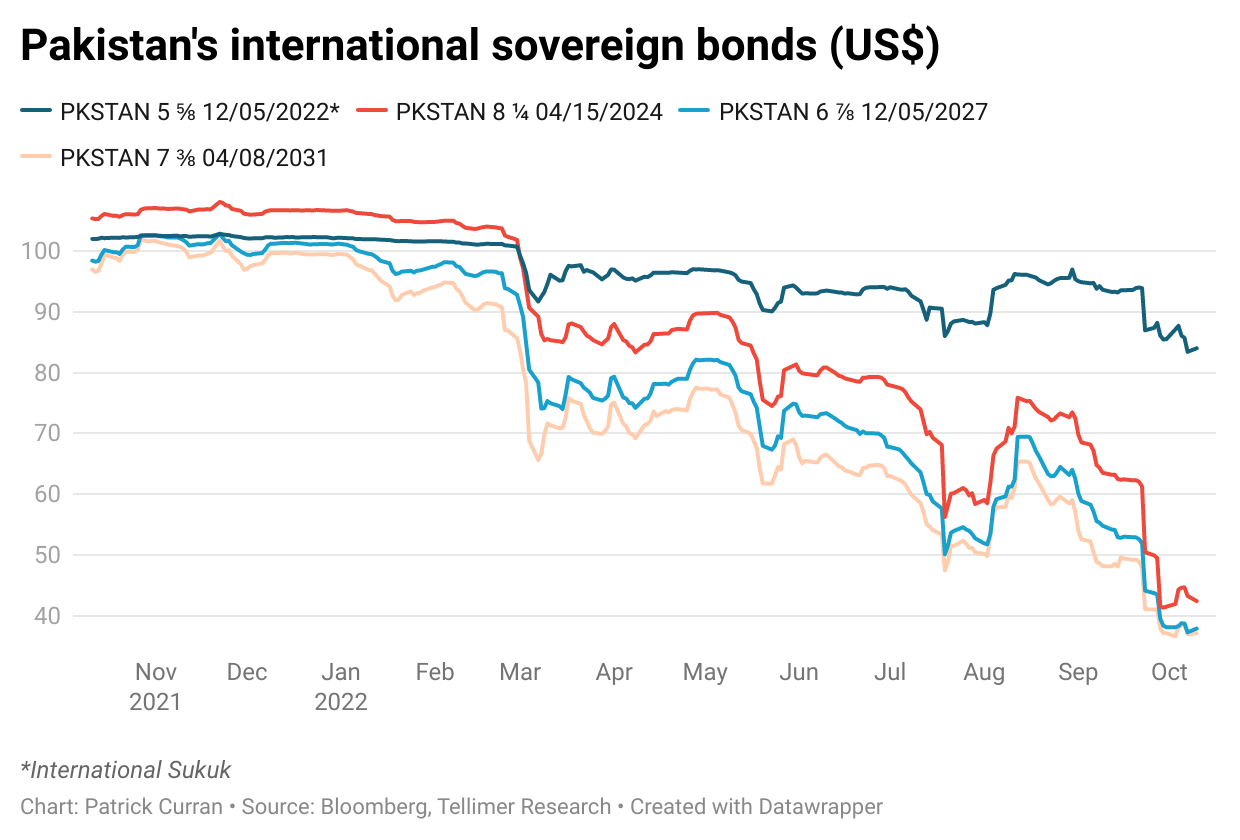