Pakistan's Eurobonds collapse on rising risk, but may have overshot fundamentals

In a webinar on 24 February, we highlighted how Pakistan’s eurobonds had managed to fully reverse their underperformance earlier in the year after its sixth EFF review was approved by the IMF Executive Board. Since then, there has been an emphatic reversal, with yields on the PKSTAN 7 ⅜ 04/08/2031s issued last April widening from 8.75% on 18 February to 14.4% at the time of writing today and the price dropping by 26.5pts from US$91.5 to US$65 over that period. 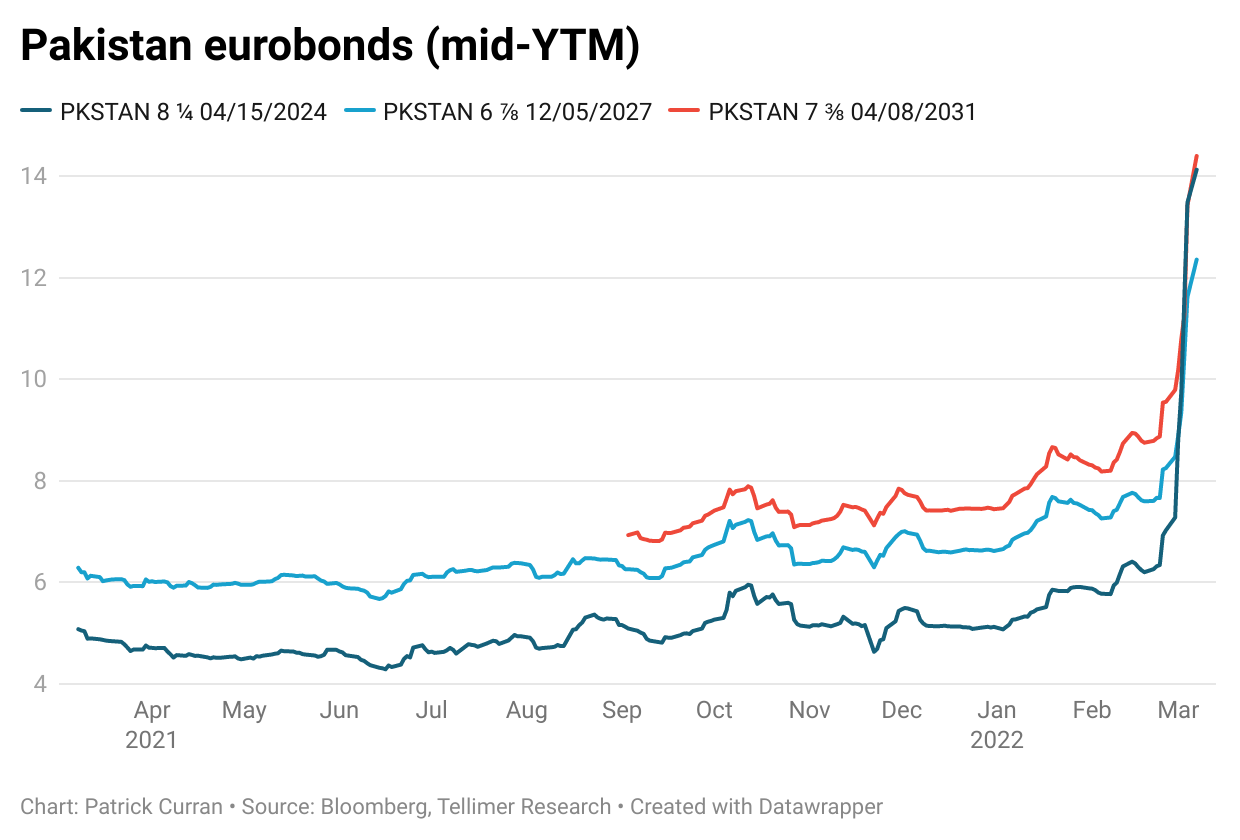 Comparing Pakistan’s performance to the wider EM universe, the EMBI Pakistan index fell by 16.6% in total return terms and its spread has widened by 419bps from 18 February to 4 March versus 4.3% and 29bps, respectively, for the EMBI Global (excluding Russia). While Pakistan’s weakness in the wake of Russia's invasion of Ukraine is not unique, its spread has widened by more than all countries, excluding Sri Lanka, Lebanon, Russia, Ukraine and Belarus.

There are several reasons for Pakistan’s outsized collapse. First, it’s exposure to food and oil imports, the prices of which have spiked since the outbreak of the conflict. Pakistan imported cUS$14bn (c4.5% of GDP) of oil in 2020 when prices averaged cUS$71/barrel. With prices rising to cUS$125/barrel at the time of writing on 7 March, this could bring the import bill to a staggering cUS$25bn (c7.5-8% of GDP), assuming unchanged volumes (and if prices stay at this level for the rest of the year).

Pakistan also imported over US$8bn (c2.5% of GDP) of food in 2021, including US$450mn of wheat. Russia and Ukraine supplied 90% of Pakistan’s wheat in 2020, and Prime Minister Khan had talked about increasing wheat and gas imports from Russia during his recent visit, which awkwardly coincided with the start of Russia’s invasion of Ukraine.

Rising prices will also push up inflation, which fell from 13% to 12.2% yoy in February but remains elevated, potentially forcing a reversal of the State Bank of Pakistan’s (SBP) dovish policy shift. With food comprising 40% of the average household’s consumption basket, it will also worsen living conditions and increase pressure on Khan’s government (with some discussion of a no-confidence vote by the opposition in parliament). 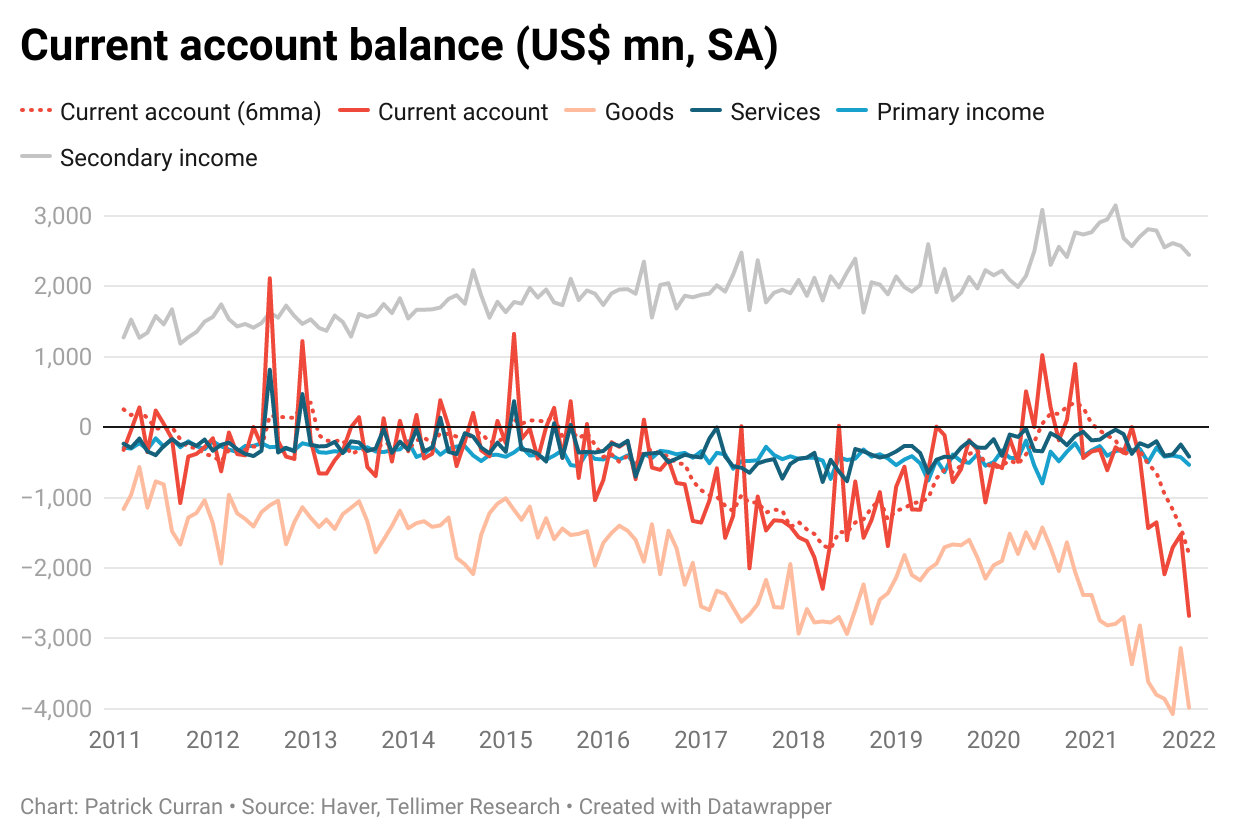 It has also coincided with worsening gas shortages in the country, with diesel-fired power generation rising to a seven-year high in January as domestic LNG output fell to a two-year low and the government failed to replace LNG cargoes after long-term suppliers were recently forced to cancel deliveries. This has caused Pakistan’s fuel costs to double yoy in January.

And that brings us to the second reason for Pakistan’s underperformance, with fuel price pressures prompting the government to reduce fuel prices by PKR10/litre and power tariffs by PKR5/unit, with an additional promise to not increase them until at least June. This is in direct contravention of a key IMF benchmark, with the government agreeing to hike fuel prices by PKR4/litre every month until they reach PKR30/litre, and will have an estimated cost of PKR250-300bn (cUS$1.5bn, c0.5% of GDP).

The decision could derail the IMF programme yet again, at the very time (given heightened global risk aversion and a worsening balance of payments) when Pakistan needs it most. Finance Minister Tarin claims that the IMF was on board with the decision, saying “We discuss with them before taking any major measure,” while IMF Resident Representative Esther Perez Ruiz says that it will discuss “the merits of the recently adopted relief package” with Pakistani authorities during the seventh programme review (which was proposed to be completed last Friday, unlocking another US$960mn disbursement, out of the remaining US$3bn).

Hikes to fuel and power prices were a key sticking point and prior action for the completion of the sixth programme review, so it is hard to imagine the IMF being happy with a reversal. That said, in the context of additional inflationary pressure globally from the Russia-Ukraine conflict, the IMF may decide to grant some leniency.

Programme targets were rephased as part of the most recent review, and the government claims there is flexibility in the composition of the budget so long as the topline deficit and debt reduction targets are met. To this end, finance ministry spokesman Muzammil Aslam told Reuters that "We have that fiscal space to fund this money," saying that Pakistan is already PKR285bn above its tax collection target and citing “unused money” that can be reallocated to fund the subsidy.

Either way, the government’s populist policy shift is likely to cause further delays and uncertainty regarding the seventh review and associated funding. And, even if the IMF grants leniency on fuel and power tariffs, it will leave the government with no room for slippage on its other six new structural benchmarks (one of which – amendment of the OGRA Act – was recently passed and will have positive implications for the reduction of circular debt in the power sector, but still needs to be implemented).

Lastly, there is also a risk that Pakistan's neutral stance on the Russia-Ukraine conflict (it is one of just a handful of countries not to condemn Russia's invasion) leads to a deterioration in its relationship with the West and puts Western financing at risk, potentially forcing Pakistan’s to rely more heavily on other partners like China or the GCC. With yields at current levels, Pakistan may have to shelve its plans (at least temporarily) to issue another eurobond and ESG-linked bonds in the coming year, putting even more importance on multilateral and bilateral funding to meet its ballooning external funding needs and highlighting the importance of its IMF programme and maintaining constructive bilateral relationships.

Bond collapse is a Buy opportunity, but downside risks abound

It is unclear how much of the recent downturn in bond prices is due to the impact of the Russia-Ukraine war versus the populist policy shift and potential derailment of the IMF programme, either of which provide ample justification for a price correction. That said, if the government can keep its IMF programme on track by reprioritising spending or boosting revenue and delivering on the remaining structural reform benchmarks, then we think the selloff has likely overshot fundamentals. Indeed, at a mid-price of US$65 at the time of writing, the PKSTAN 7 ⅜ 04/08/2031s are pricing in a 60% probability of default under standard recovery assumptions, which seems excessive.

We still think Pakistan has one of the more positive reform stories in EM, but with extremely elevated balance of payments pressures and limited buffers (liquid FX reserves dropped to US$16.5bn, or just over 2.5 months of trailing goods imports), it will struggle to stay afloat without IMF support and the additional funding and market access that it entails. Additional monetary tightening will likely also be needed to offset the fiscal easing, with the SBP likely to hike rates by 25-75bps at tomorrow’s monetary policy committee meeting (our research channel IMS projects 50-75bps of hikes, while six of 10 analysts surveyed by Bloomberg projected hikes of 25-50bps).

We cannot deny the negative implications of Pakistan’s recent policy reversal, and if it is unable to keep its IMF programme on track then we think the recent price drop is justified, given the rising risk of a balance of payments crisis. However, if the programme is rephased and Pakistan’s broader reform efforts continue as planned, we think the recent selloff – which has far outstripped that of most of its peers, albeit not without reason – has presented a compelling Buy opportunity.

It is difficult to predict the IMF’s reaction, even more so because of the recent departure of Pakistan’s Mission Chief. However, assuming a 50/50 probability of programme continuation, we think the upside outweighs the risks. While we acknowledge that external vulnerabilities will remain elevated even if the IMF programme is kept on track, with a relatively flat yield curve of c13-14% across the curve, Pakistan’s eurobonds are now trading at distressed levels and the risks are largely priced in.

As such, we reaffirm our Buy recommendation at US$65 (14.4% YTM) on a mid basis at the time of writing on Bloomberg for the PKSTAN 7 ⅜ 04/08/2031s, with the recent selloff providing a new opportunity to enter the trade or increase exposure at more attractive valuations.