Pakistan's early elections are positive for Imran's PTI and investors

Within three months, Pakistan will elect a new parliament. An apolitical, technocratic, IMF-friendly, government is likely in the interim. The key election issue has quickly turned from the economy to national security. This suits Imran Khan's PTI.

It should also be welcomed by any investor hopeful of continuing structural reform, instead of a reversion to the kleptocracy promised by opposition parties. It is worth digging deeper than the 'political chaos' interpretation of most mainstream media.

With equities valued at a deep discount to historic average and bonds priced at near-distressed levels, we recommend buying any further dip in the wake of the cancelled no-confidence vote and the call for early elections.

We acknowledge that: 1) any sustained rebound is predicated on the resumption of the IMF programme or a tightening of domestic monetary and fiscal policy (and likely a weaker currency) to prevent a BOP crisis; and 2) that prevailing high commodity prices are an ongoing headwind for the investment case. 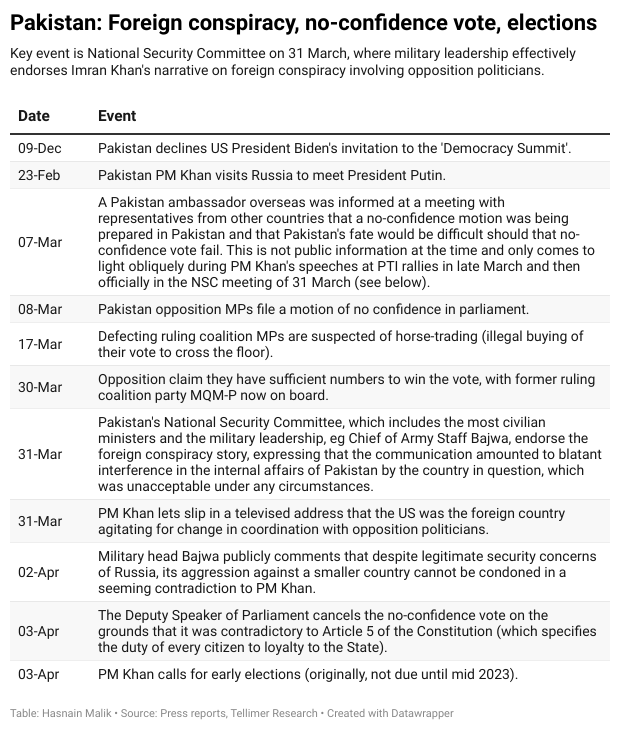 In all of the drama of the last month or so, the pivotal event was the meeting of the National Security Committee on 31 March.

At this meeting of the most senior civilian and military leadership, including Chief of Army Staff Qamar Javed Bajwa, the narrative of Imran Khan that there was a foreign conspiracy underway to support opposition politicians and remove his government was effectively endorsed.

Our concern is not whether there is truth to the foreign conspiracy story — the US has flatly denied any role, for what it is worth.

Instead, the critical points are the following:

In practical terms, as opposed to philosophical or historical truth terms, every other part of the drama has been rendered irrelevant; it no longer matters that the opposition credibly claimed they had the simple majority of MPs needed to pass the no-confidence vote.

Given the Supreme Court's recent unwillingness to entangle itself in the procedures of parliament, it may also no longer matter that the opposition intend to challenge the deputy speaker's action to cancel the no-confidence vote. 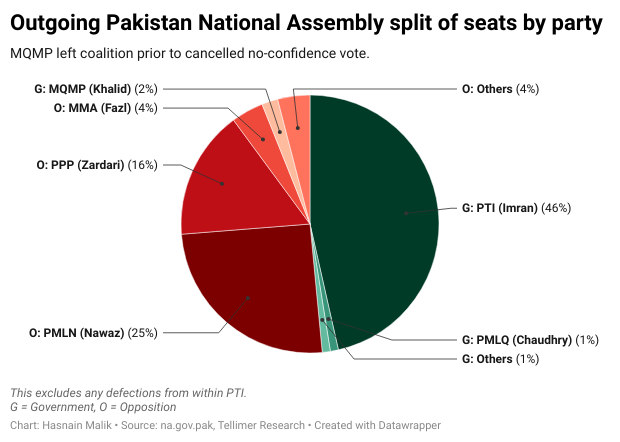 Markets have increasingly positioned for Khan’s removal in recent weeks.

Pakistan equities have been less of an underperformer ytd, with the KSE100 down 3% compared to MSCI FM down 6%. But this follows severe underperformance over the past year, down 15% compared to up 13% for FM. Trailing PB of 0.8x (for trailing ROE of 19% and dividend yield of 8%) amounts to over a 30% discount to the 5-year median.

After Russia’s exclusion from the EMBI on 31 March, Pakistan’s year-to-date spread increase has been exceeded only by Lebanon, Ukraine and Tunisia among EMBI constituents, with the z-spread on the PKSTAN 7 ⅜ 04/08/2031s widening by 368bps ytd as of cob on Friday to 986bps (US$75 price, 12% YTM).

At the same time as Pakistan’s political drama has been playing out, its external position has become even more tenuous, with liquid FX reserves dropping from US$15bn to US$12bn in the week through 25 March amid the repayment of a syndicated loan facility from China. At less than two months of imports and just over eight months of external principal payments, this highlights the importance of keeping Pakistan’s IMF programme on track if it is to avoid a balance of payments (BOP) crisis.

But with equities at such a steep discount to historic average valuation and bonds trading at near-distressed levels, much of the risk appears priced in. The question now becomes whether or not the new government can keep the IMF programme on track and, if not, whether sufficient bilateral support will come through to buy Pakistan time to curb its current account deficit by tightening monetary policy in order to rein in imports.

Between the recent slippage on the IMF’s conditionality regarding fuel and electricity tariffs and a change in government, it appears increasingly likely that the IMF programme will at least need to be renegotiated (once again). But, if the programme is put on track (either with a successful 7th review or timely renegotiation), there could be significant upside for Pakistan equities and eurobonds.

In the near-term, we think the new government, both the interim one before the election and new one after, will remain committed to the IMF programme as there is a broad understanding that Pakistan has few alternatives and the new government can blame any associated economic pain on its predecessors.

Over the longer-term, Pakistan’s structural reform agenda could improve considerably should the PTI emerge with a larger majority in its own right with less reliance on coalition partners. The manner in which the last month's political drama has arguably discredited the opposition and PTI defectors in the eyes of the electorate, reaffirmed the unity of the military leadership with the PTI, replaced the economy with national security as the key issue in the election campaign, and brought anti-corruption back into the spotlight, may prove very positive for the investment case if it serves to increase the PTI's control of parliament.

The opposition parties, on the other hand, are united only by a shared fear of prosecution over corruption, with cases ongoing against leaders such as Shehbaz Sharif of the PMLN and Asif Zardari of the PPP, and offer little more than a return to kleptocracy.

For global equity investors in EM, there are commodity exporter markets which are clearly better positioned in the current environment. But the deep value on offer in Pakistan is rare and greater prospects of a stronger PTI government reinforce the investment case.