In late August, we flagged rising external risks in Pakistan amid surging imports and the potential unwinding of its IMF programme. In this note, we analyse Pakistan’s balance of payments dynamics in a series of charts as BOP and currency pressures continue to mount.

The Pakistani rupee (PKR) has been under fire over the past five months, depreciating by 10.7% versus 4.4% for the JP Morgan EM Currency Index, making it the 7th worst performing EM currency tracked by Bloomberg. 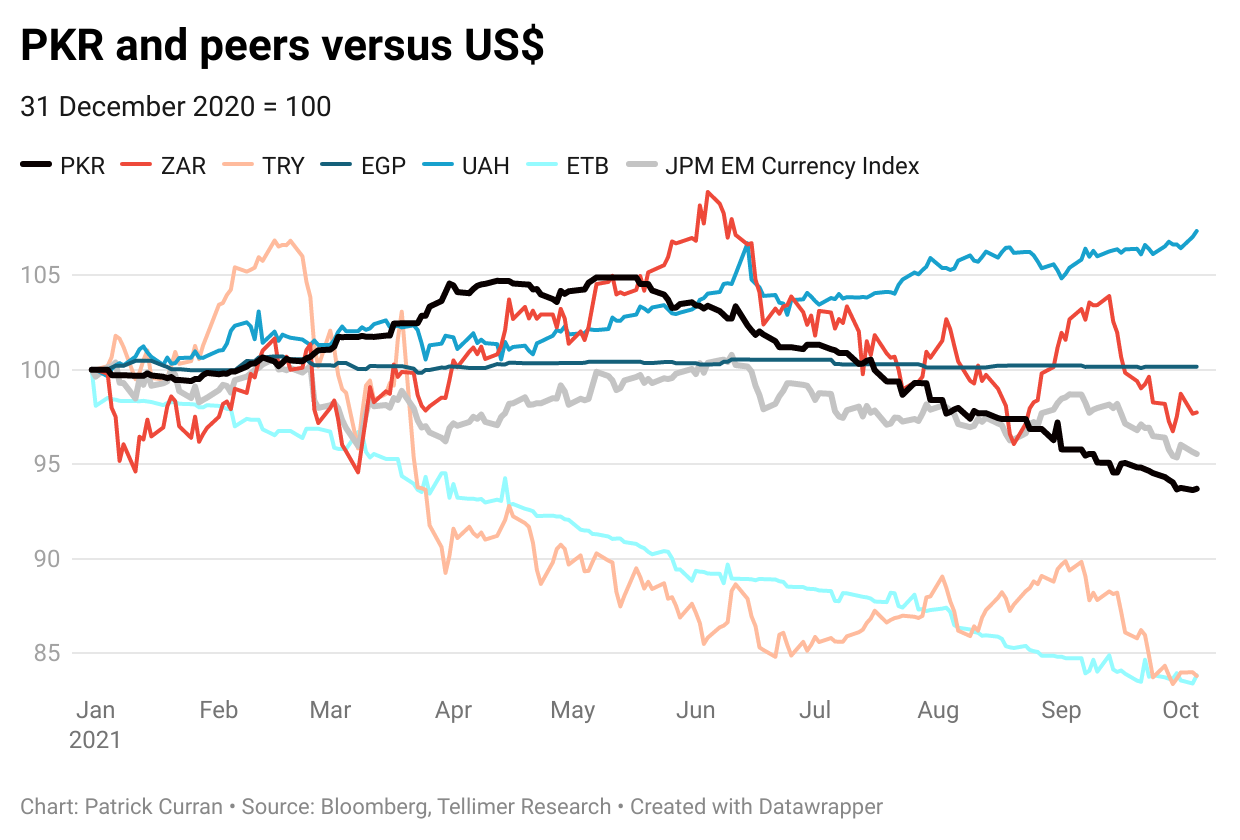 Currency weakness has been driven by a widening current account deficit. After contracting sharply from 6.1% of GDP in FY 18 (through June) to 1.7% in FY 20 and 0.6% in FY 21, Pakistan’s current account has swung to a US$2.3bn (4.1% of GDP) deficit over the first two months of FY 22 versus a US$0.8bn (1.8% of GDP) surplus in the same period last year. This has been driven by surging imports, which are up 65% yoy over the first three months of the fiscal year versus a 27% rise in exports. 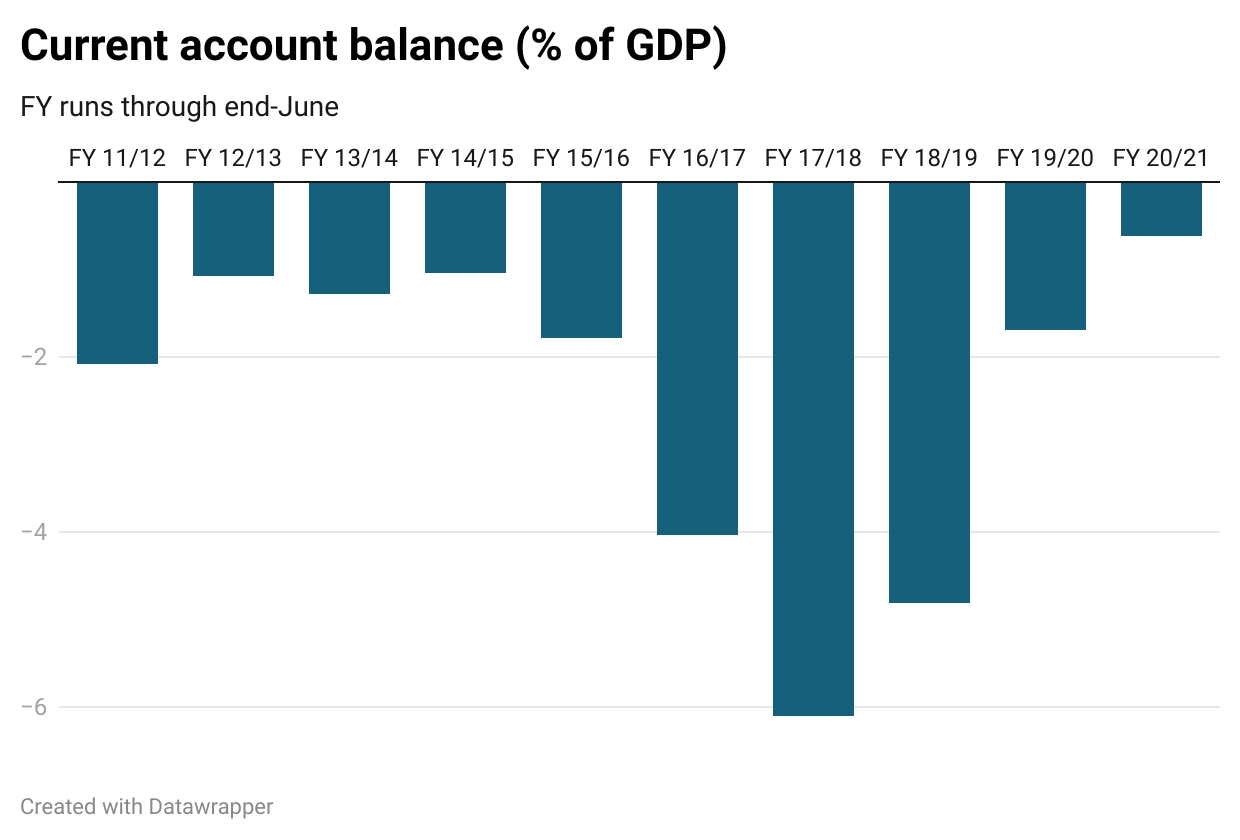 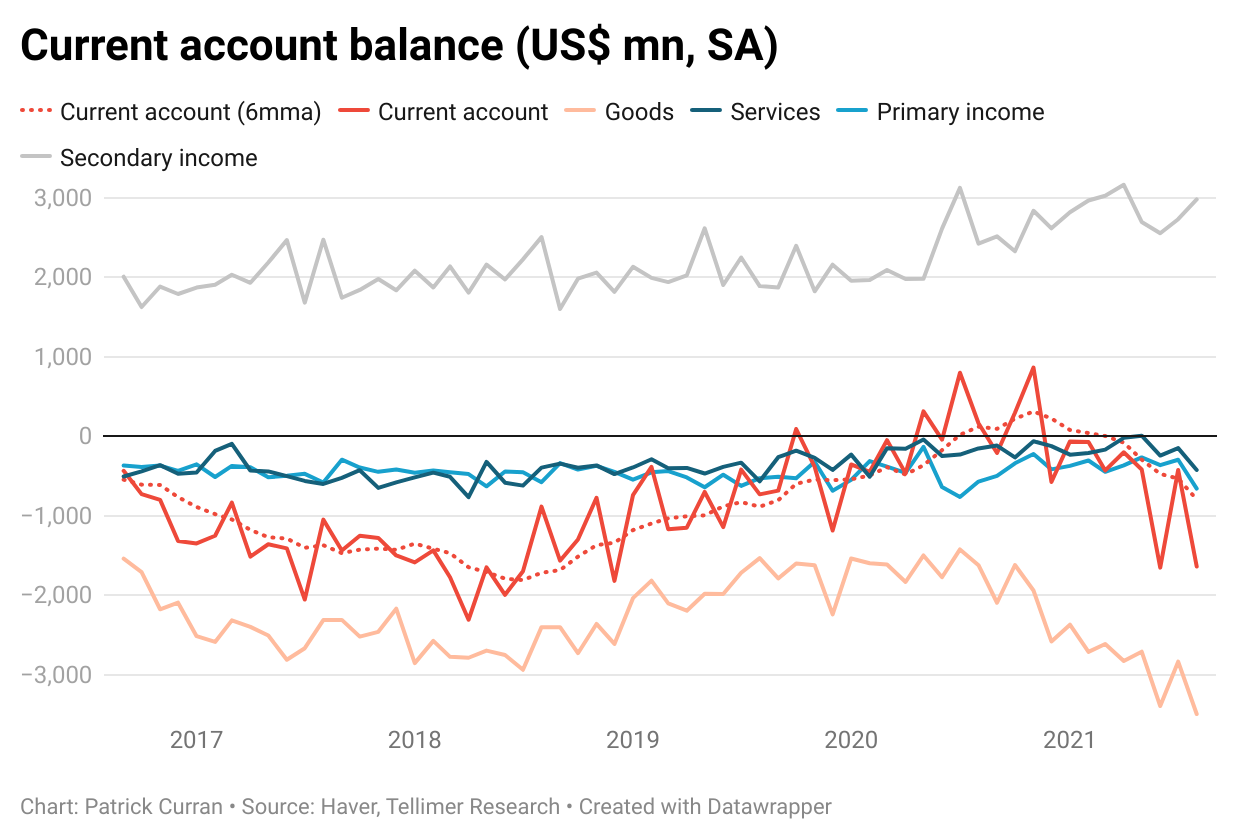 On a calendar year basis, Pakistan’s current account deficit has widened by US$5.2bn over the first eight months of 2021, reaching US$5.4bn versus just US$0.2bn at the same time last year. Year-to-date through September, imports have risen by 55% yoy (+US$17.9bn) while exports have risen by 31% yoy (+US$4.8bn), widening the trade deficit by US$13.1bn. 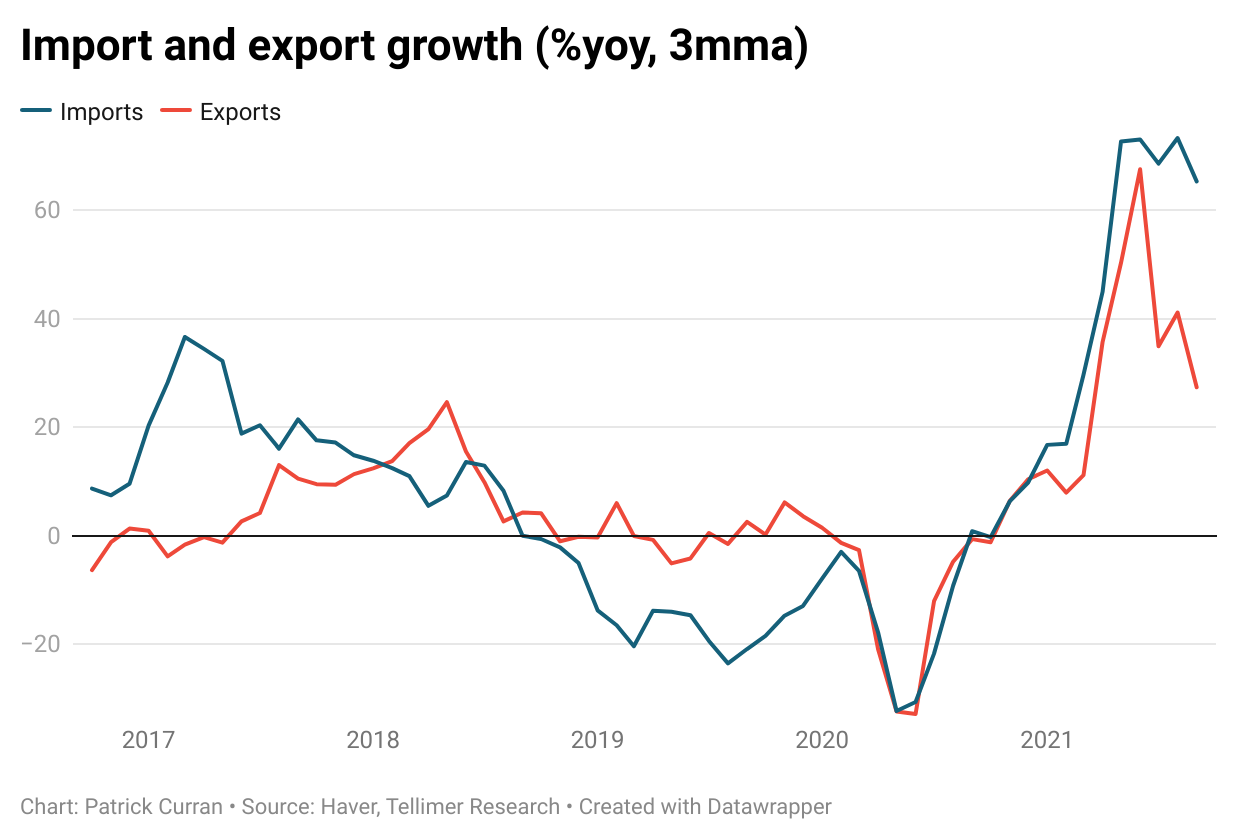 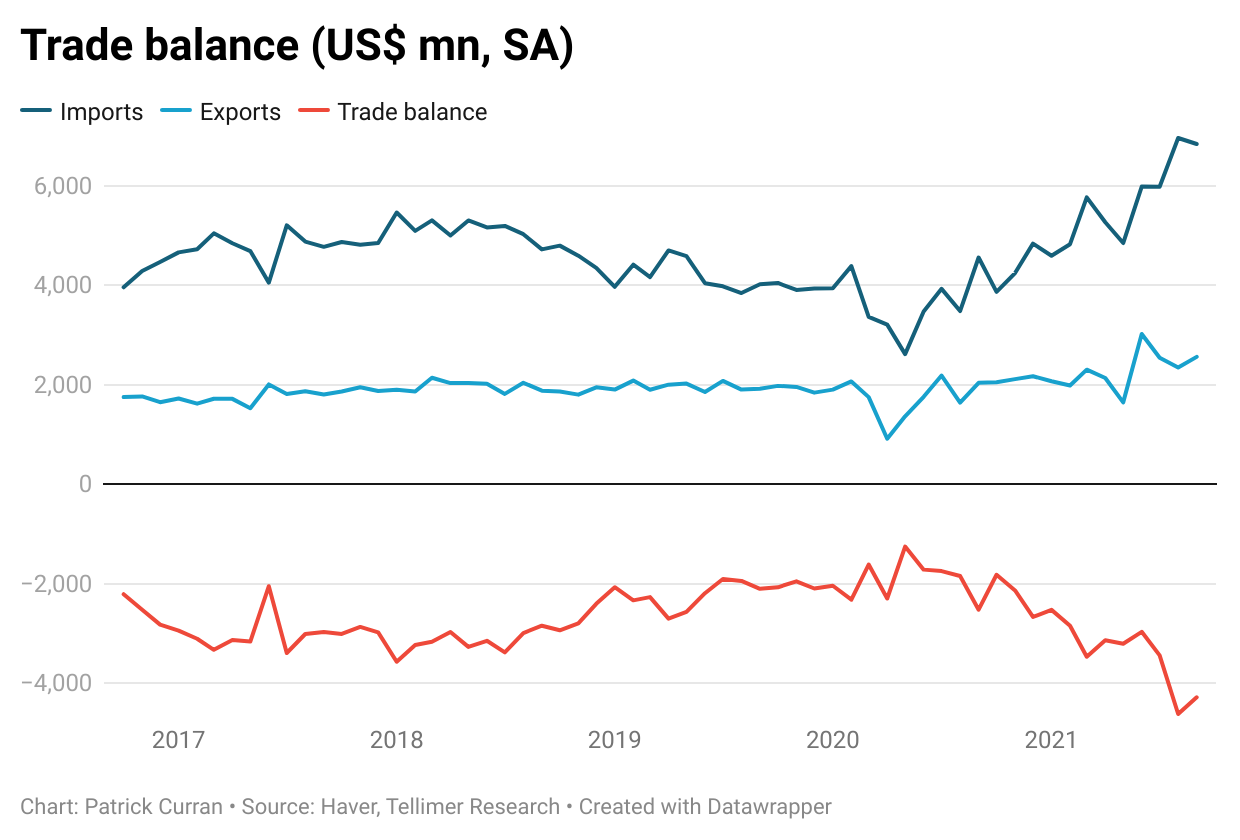 The widening trade deficit has been offset in part by robust remittances, which are continuing to flow in at a record pace (averaging US$2.7bn over the past three months) and are up 24% yoy (+US$3.9bn) over the first eight months of the year after last year’s 17% rise. Remittances have been supported by inflows from the Roshan Digital Account initiative, which has brought in US$2.1bn since it was first introduced last September, despite still-low levels of participation. 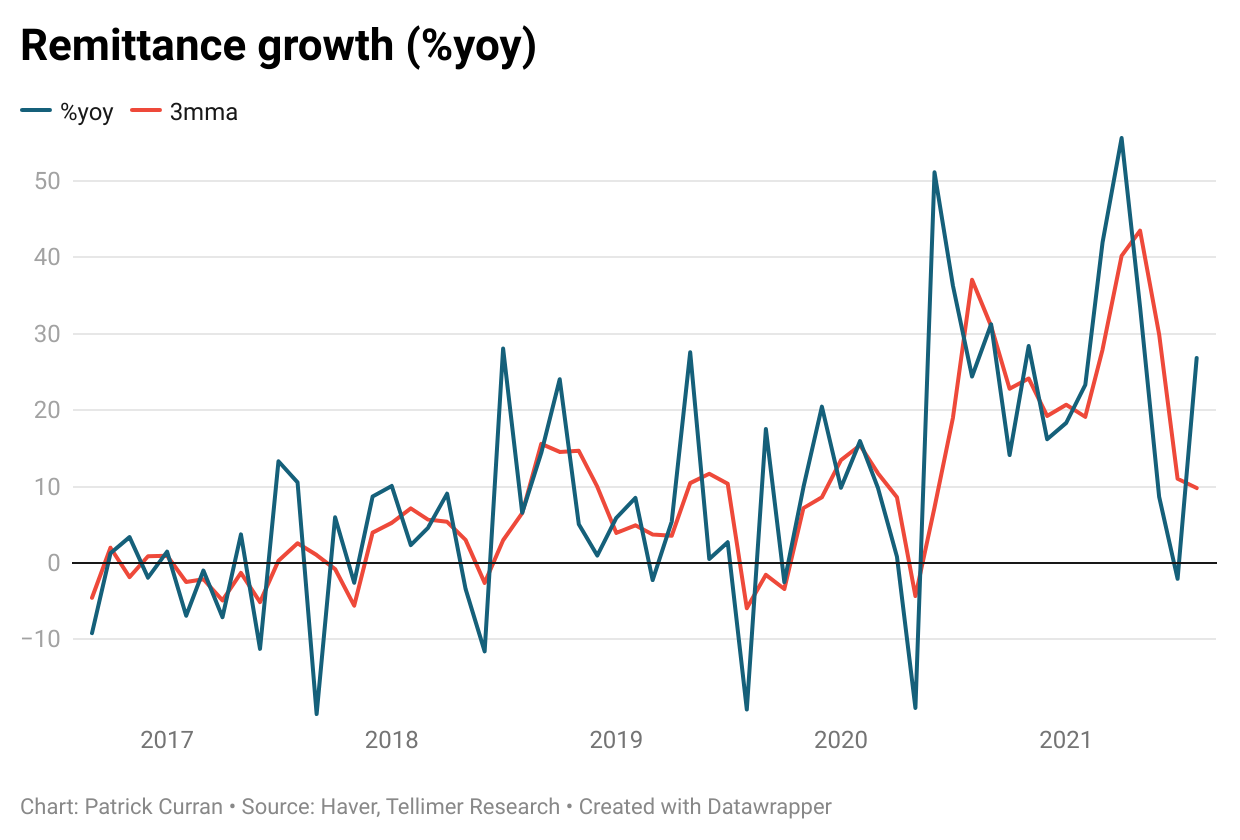 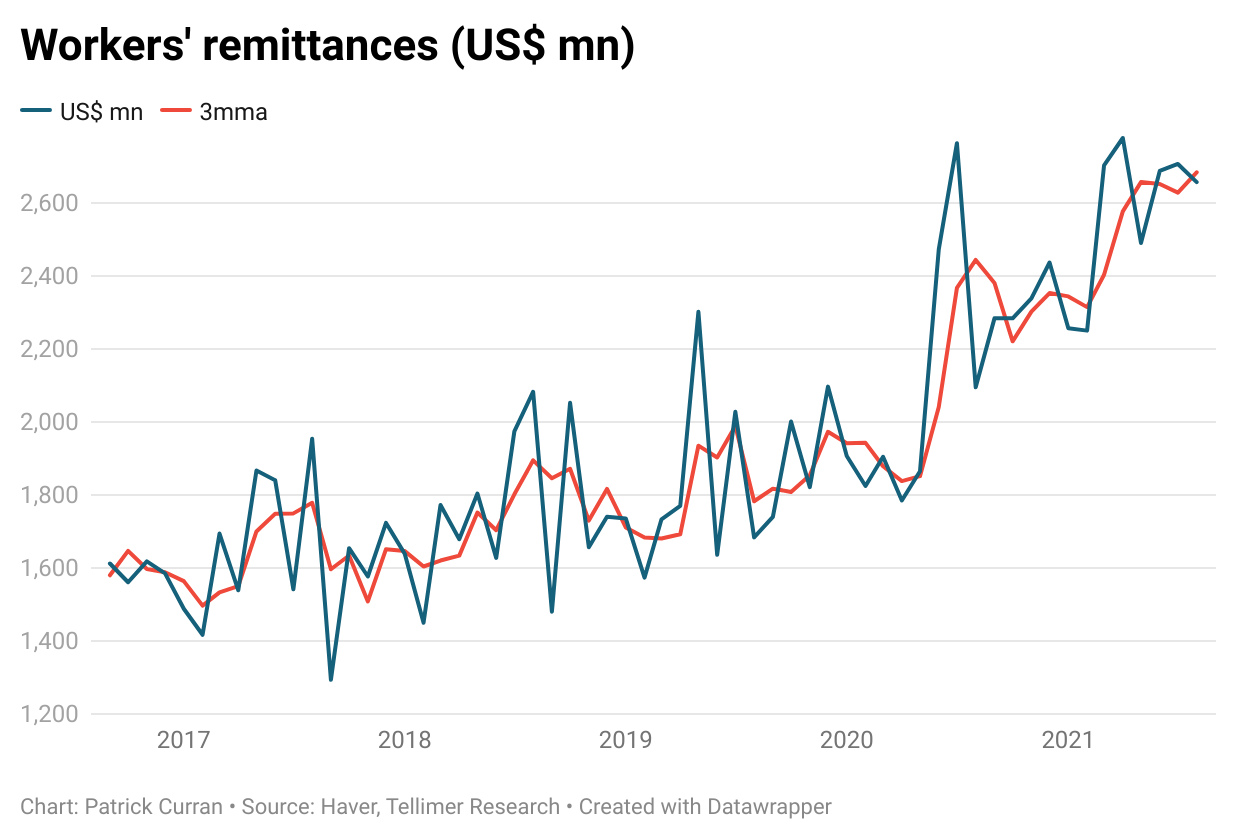 In addition, robust financial inflows have helped offset the deterioration of the current account, including commercial external issuance of US$4bn so far this year. However, the composition of Pakistan’s financial account is worrying, with net FDI stagnant at just US$1.2bn ytd through August (down from US$1.4bn in the same period last year) versus US$4.2bn of net portfolio investment inflows (up from -US$0.6bn) and US$7.2bn of net other investment (up from US$1.8bn). 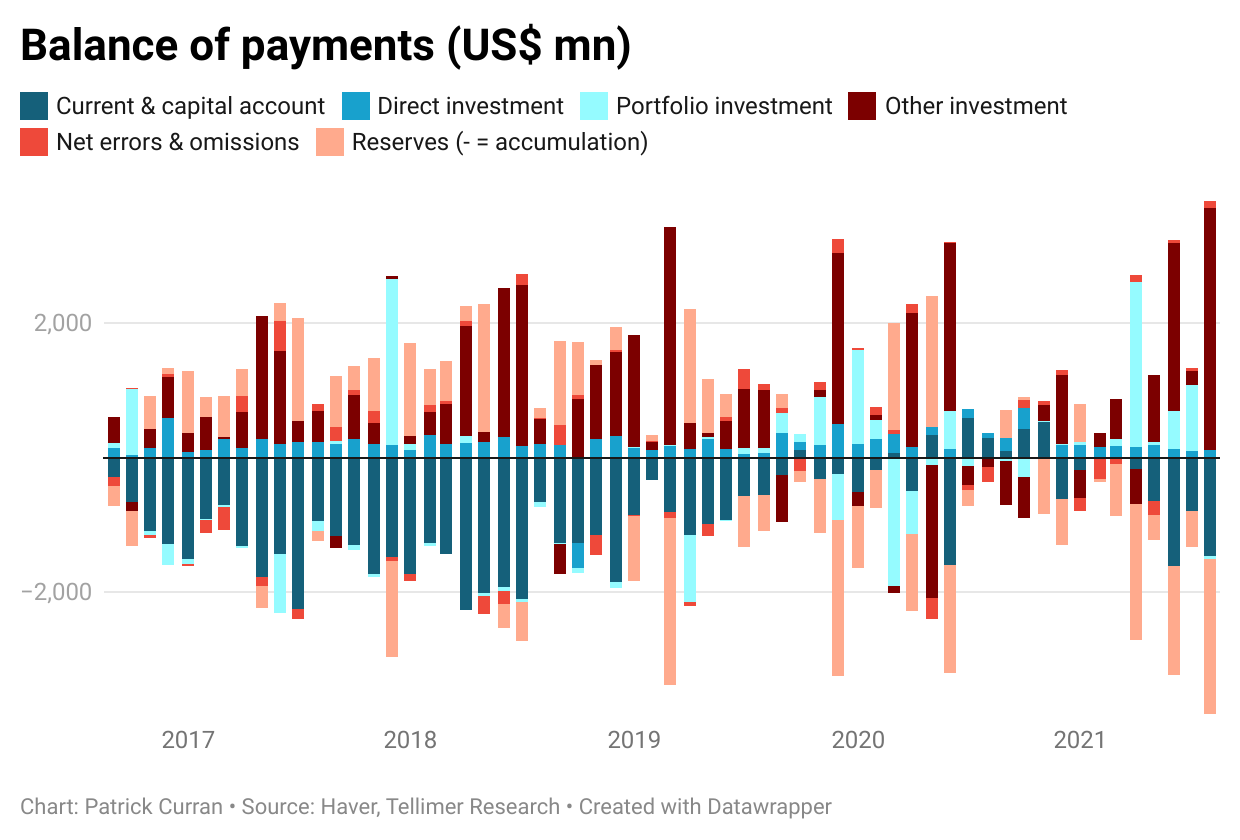 On balance, reserves have continued to rise despite mounting BOP pressures, with liquid FX reserves of the SBP reaching an all-time high of US$20.1bn in August on the back of a US$2.77bn SDR allocation from the IMF. The net improvement has been even greater, with FX swaps and forwards declining by US$3.2bn since mid-2019. Looking ahead, reserves will be further supported by the extension granted on 24 September of Pakistan’s participation in the DSSI through year-end (which saved Pakistan cUS$540mn in H1 21 and cUS$1.4bn since last May, around 40% of total relief offered under the scheme). 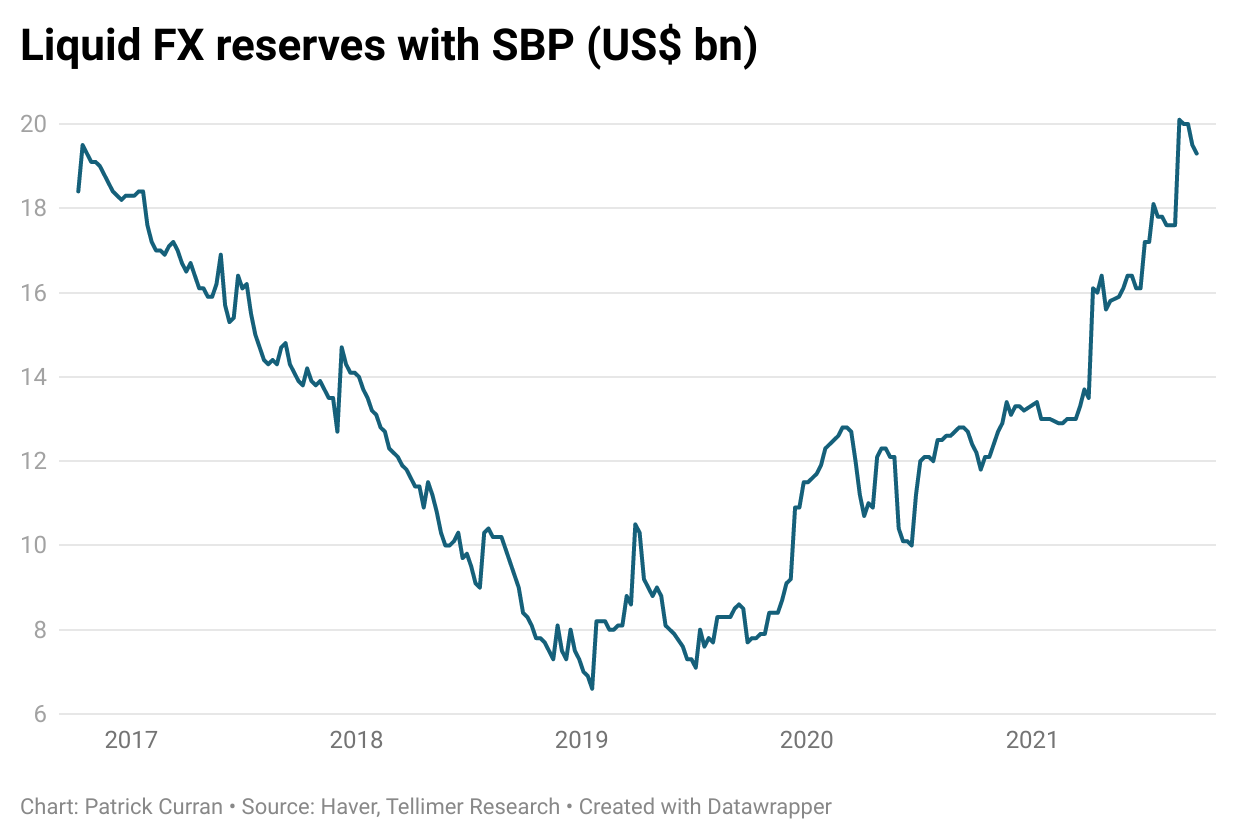 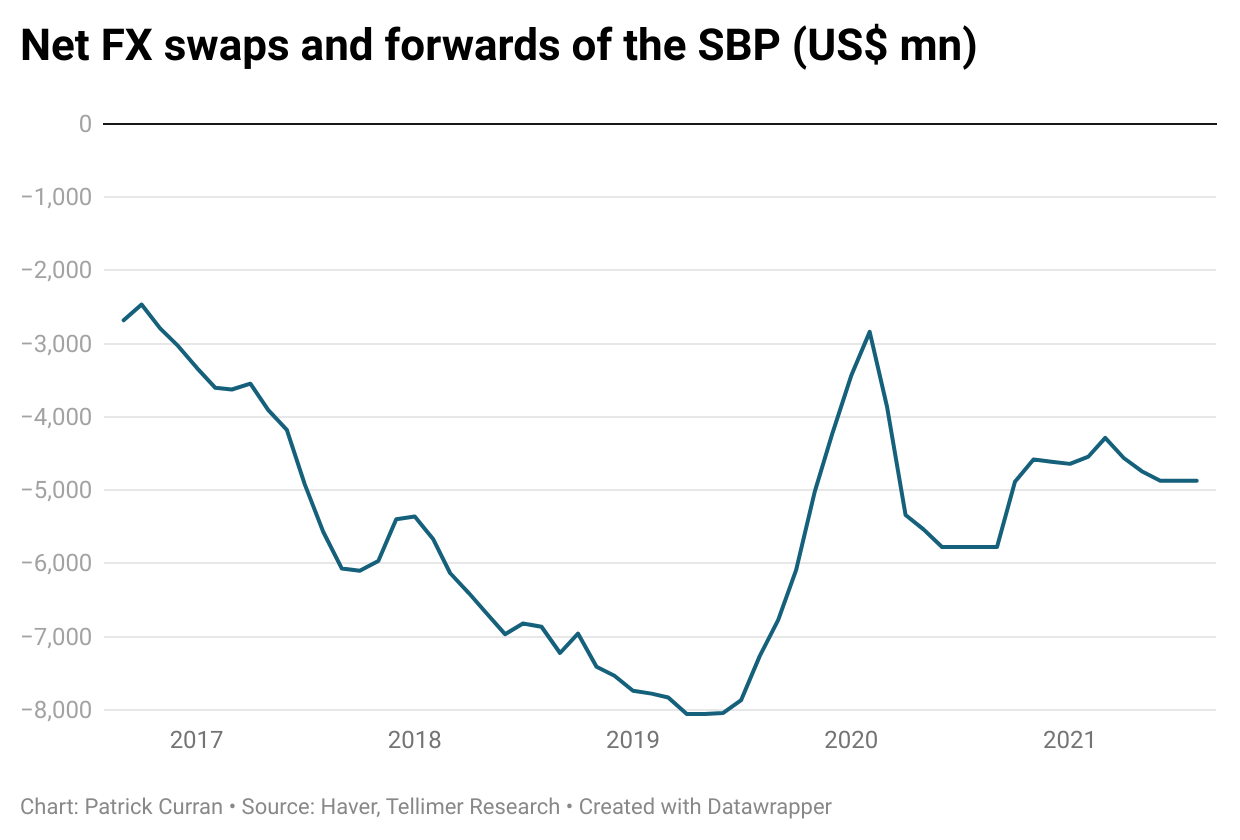 However, with imports continuing to rise sharply, the PKR is likely to stay on the backfoot until current account pressures are brought under control. Whereas BOP imbalances manifested in falling reserves in recent years, Pakistan’s transition to a more flexible currency means that PKR weakness is the inevitable upshot of increasing current account imbalances, especially if financial flows moderate or reverse course (which is a risk, given the increased reliance on relatively fickle portfolio and other investment inflows).

We highlighted in our recent note how strong import growth doesn’t need to be a cause for concern if it simply reflects a robust economic recovery and/or transitory factors, but only if it reflects an overheating economy. Indeed, the central bank (SBP) had expected the current account to rebound to a sustainable 2-3% of GDP in FY 22 based on Pakistan’s post-Covid recovery, and attributed much of the recent rise in imports to transitory factors.

Indeed, surging commodity prices have been a key driver of rising imports, with petroleum imports rising 51% yoy (+US$2.7bn) and food imports rising 79% (+US$1.8bn) through August. But even stripping out food, petroleum, and metals, imports are still up 48% yoy (+US$7.8bn) ytd. Some of this can also be explained by transitory factors, with Pakistan’s PKR450bn (1.1% of GDP) TERF stimulus pushing up machinery imports 42% yoy (+1.8bn) and textile imports surging by 37% yoy (+US$1.2bn) in response to the need for intermediate imports to support booming textile exports (+33% yoy). 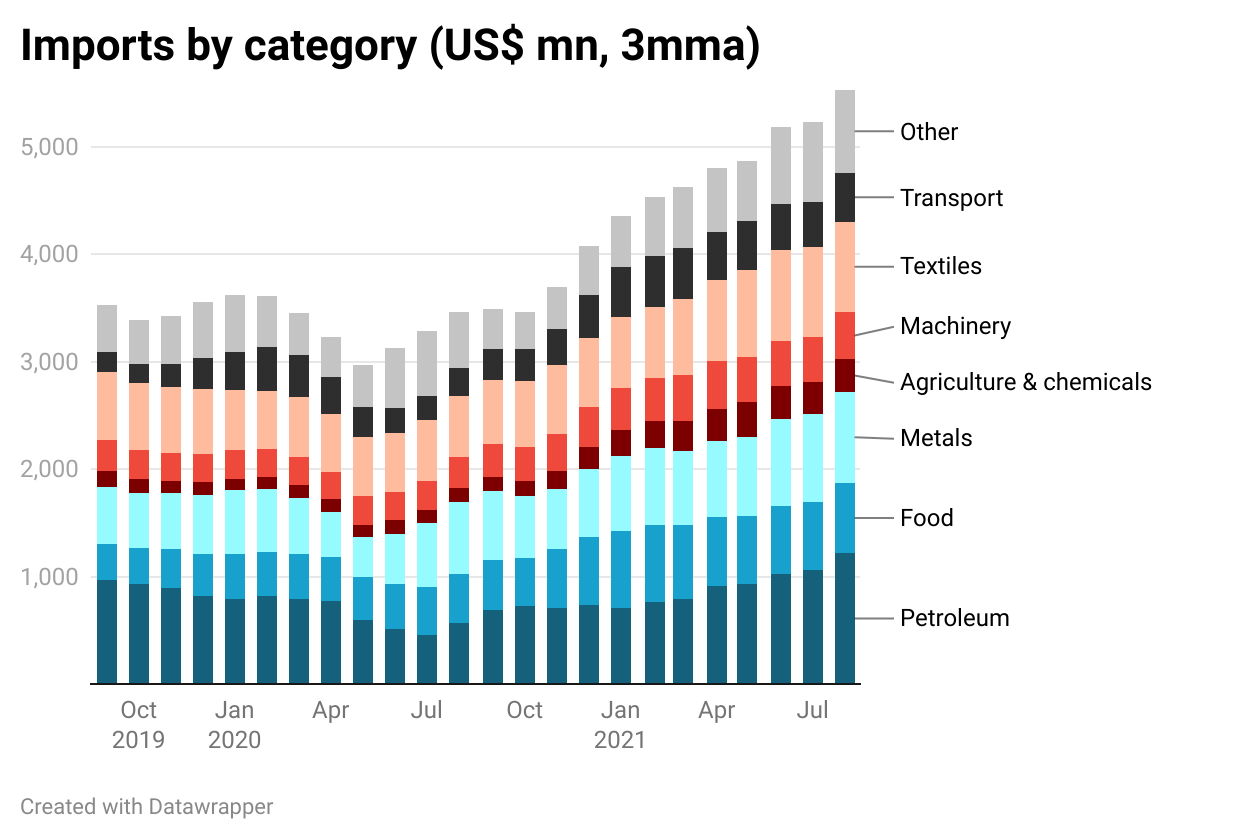 That said, with non-commodity, machinery or textile exports also surging, there is more than just a transitory dimension to Pakistan’s rising imports. Our measure of “core” imports, which strips out the categories above, rose 61% yoy through August. And more recently, there is concern that expanding imports may signal more than just a healthy recovery. The SBP now projects real growth to be near the top end of its 4-5% forecast range in FY 22, potentially erasing the output gap by the end of the fiscal year and pushing the current account deficit beyond its initial projections.

In addition, while inflation fell in July and August due to positive base effects, month-on-month growth remained high (0.95% on average over that period) and inflation rebounded from 8.4% to 9.0% in September (above the 8.2% Bloomberg consensus). This has been accompanied by a rise in inflation expectations and wage growth, potentially hinting at accelerating price pressures in the months ahead and signalling an overheating economy.

Policymakers have begun to take note, with the SBP raising the policy rate by 25bps to 7.25% last month, the first change since June 2020. The SBP has also revised prudential regulations for consumer financing to moderate imports and demand growth, increased the cash margin on imports of luxury goods to 100% of value, asked banks to submit information on expected import payments above US$500,000, and asked lenders to share a 5-day schedule for import payments daily.

While policymakers have implicitly acknowledged that the rise in imports may not be sustainable, it remains to be seen if they have done enough to contain it or if further tightening will be required to preserve Pakistan’s hard-won gains in BOP stability.

IMF programme is still core to the investment thesis

Looking beyond Pakistan’s currency challenges, hard currency debt has also underperformed the JP Morgan EMBI by 2.2% in total return terms since mid-June, with the spread on the PKSTAN 7 ⅜ 04/08/2031 eurobonds widening by 100bps over that period. 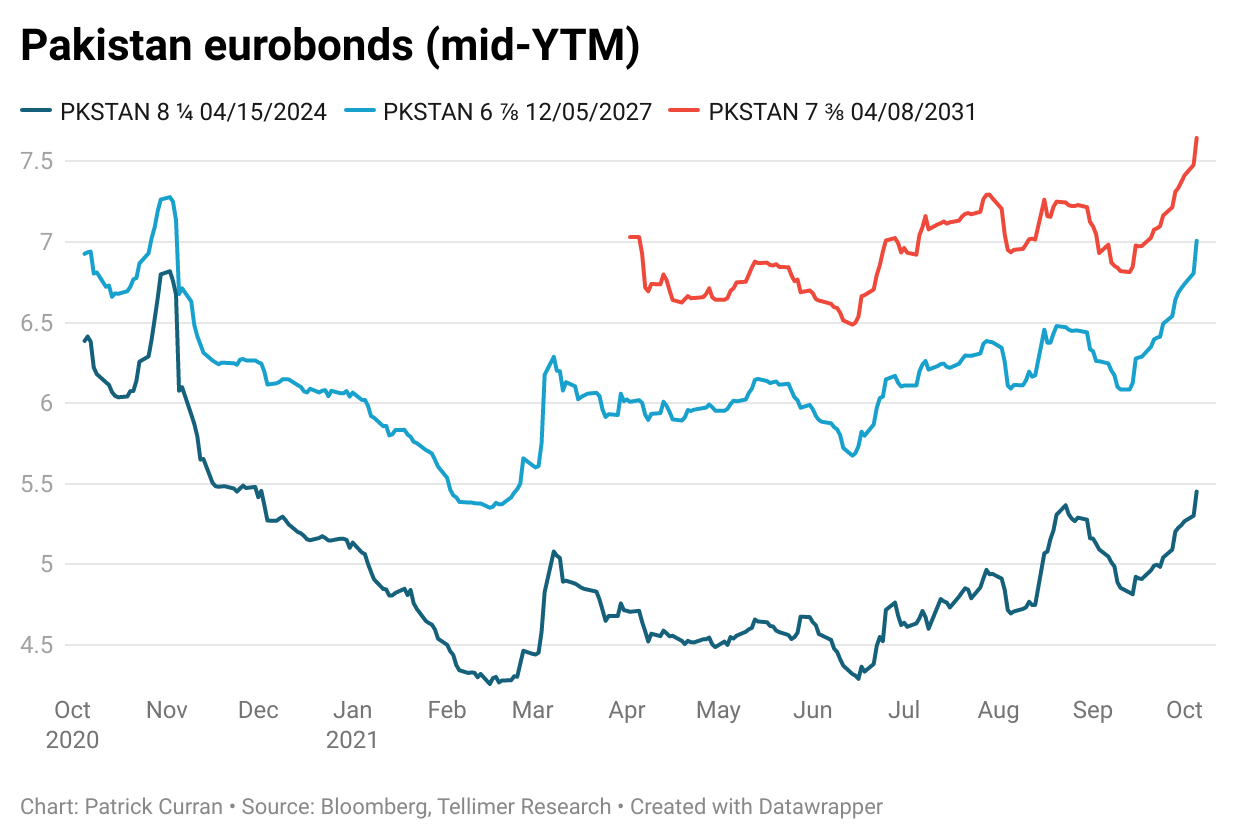 As we highlighted in our last report, Pakistan continues to largely stay the course on its headline fiscal targets, but has fallen off course with some of the more contentious reforms under its IMF programme, including electricity tariff and tax hikes (and the recent resignation of the Prime Minister’s Special Advisor on power and petroleum, Tabish Gauhar, may signal that there is not likely to be major structural reform of, for example, utilities’ circular debt in the short-term). This has pushed its IMF programme off track for the time being, with the sixth review of its EFF programme still pending after the initial 3 September deadline. However, talks have reportedly resumed this week, and if the programme is resumed then Pakistan’s eurobonds could reverse some of their recent underperformance.

That said, the implication of Finance Minister Shaukat Tarin in the recently released Pandora Papers (alongside six other Pakistani politicians) could complicate things. Prime Minister Khan responded by tweeting that his government will investigate “all of our citizens” named in the Pandora Papers, and while it is not clear that Tarin acted illegally, he still needs to be elected to public office within a month to continue serving as Finance Minister and anything that puts that at risk could have implications for Pakistan’s reform efforts and IMF talks, given the central role that Tarin plays in both (see here for some thoughts on this from our Karachi-based providers IMS).

Balancing Pakistan’s deteriorating BOP dynamics with its continued progress on fiscal consolidation and uncertainty on the prospects for its IMF programme, we maintain our Hold recommendation on Pakistan’s eurobonds. However, should the IMF programme be resumed, and recent policy efforts succeed in stemming the current account deterioration, we could become more positive.

See here and here for a more complete rationale of our trade recommendation on Pakistan’s eurobonds.

Pakistan political storm in a teacup (again), May 2021 (Malik)