A deteriorating balance of payments and stalled IMF programme have weighed on Pakistan’s eurobonds in recent months, with the Pakistan EMBI index falling by 2.4% in total return terms through 19 November versus a 0.4% drop in the EMBI Global, and its EMBI spread rising by 30bps over that period versus 19bps for the EMBI Global. 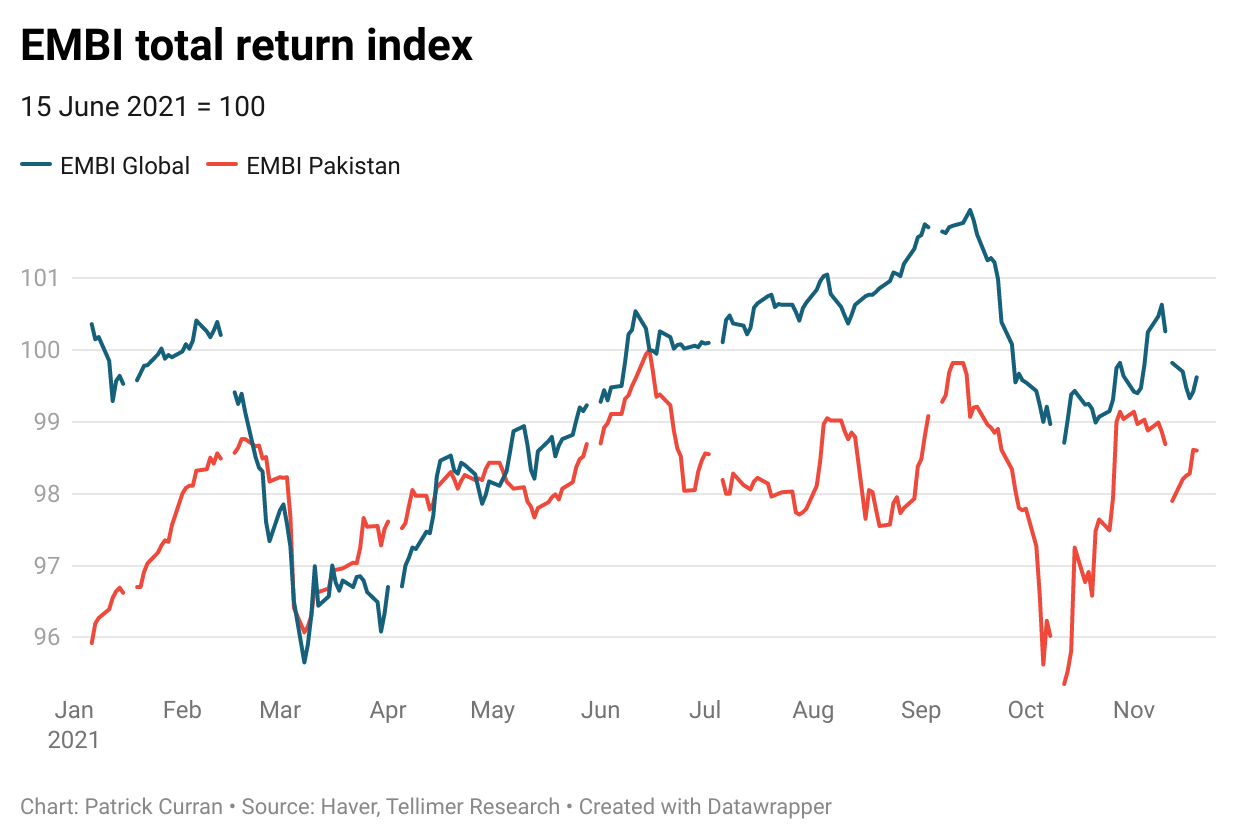 Although we continue to think that Pakistan offers a compelling reform story compared with most peers, a renewed focus on growth over stability since the summer has pushed reserves down to below three months of imports, with the State Bank of Pakistan (SBP) now seeing upside risks to its 5% growth forecast for FY 21/22 (versus the 4% IMF forecast) and the current account deficit now projected to “moderately exceed” its initial 2-3% of GDP target. 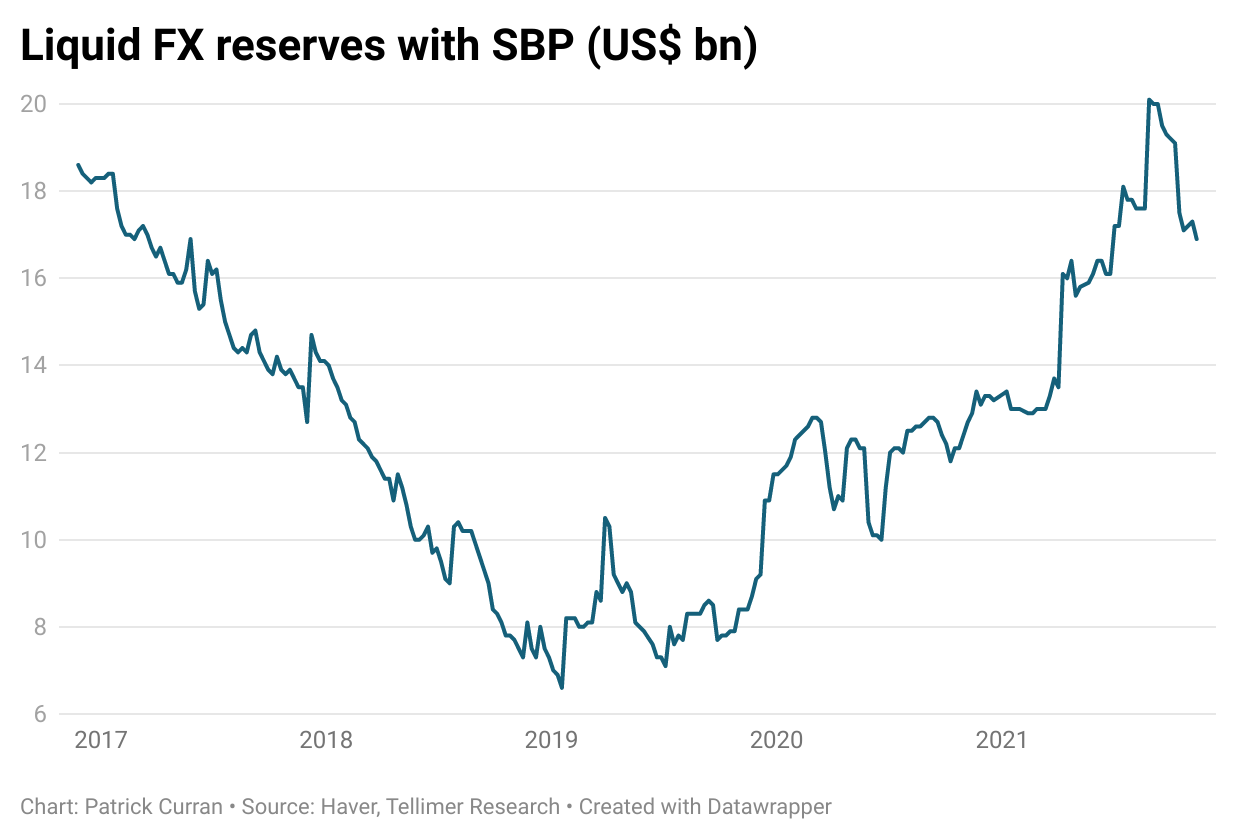 In response, the SBP moved its latest monetary policy committee (MPC) meeting forward and, on Friday, decided to hike its policy rate by 150bps, above the Bloomberg survey median of 100bps. It also decided to raise the number of annual MPC meetings from six to eight.

In a post-MPC presentation, Governor Baqir acknowledged the need for a faster normalisation of monetary policy in light of rising domestic and global inflationary pressures, mounting external imbalances and the ongoing tightening of monetary policy in developed markets, but said that the end goal of a measured transition to “mildly positive real interest rates” has not changed. 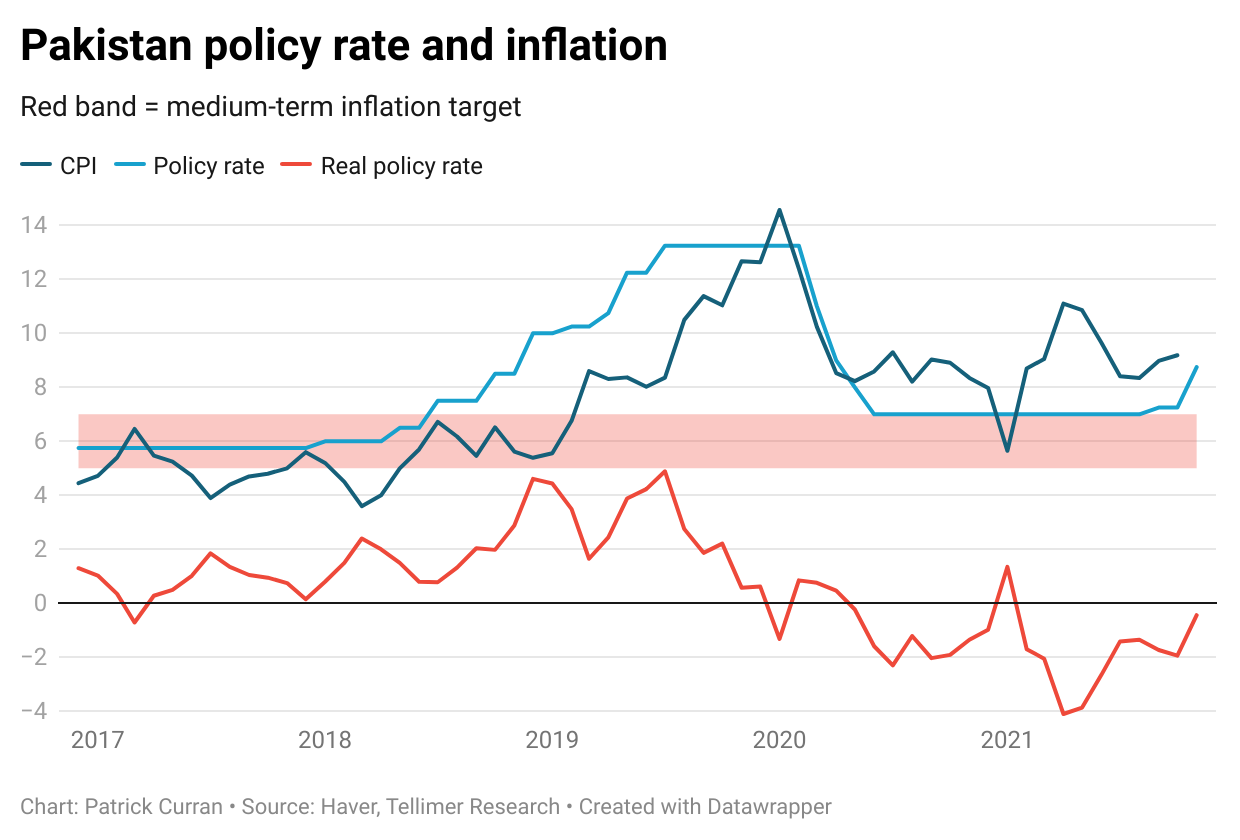 We think the decision was a prudent one, and will help stem the ongoing fall in reserve levels and PKR. It will also help to anchor inflation expectations, which have begun to rise of late, and clamp down on the surge in private sector credit growth. The independence of the SBP will also be strengthened by the recent approval of the SBP Act Amendments, which was a key prerequisite for approval of the sixth extended fund facility (EFF) review by the IMF.

Indeed, the IMF approved of the policy shift in a statement on Sunday in which it granted staff-level approval of the sixth EFF review. Policy disagreements, primarily over resistance to hiking power tariffs and increasing taxes, had delayed approval since September. While all quantitative performance criteria “had been met with wide margins, except for that on the primary budget deficit,” several sticking points have remained on the structural front.

With the passage of the SBP Act Amendments, agreement to hike power tariffs and adopt the NEPRA Act, clearance of the latest tranche of arrears to IPPs, and a promise to introduce a new fiscal package of fiscal aimed at a “small reduction of the primary deficit” relative to last year by, among other things, raising fuel taxes and introducing a general sales tax, the path was finally cleared for staff approval of the sixth review (see here for a more complete analysis from our research partners at IMS). However, the review is still subject to Board approval, which is contingent on the completion of certain prior actions (including finalising the policies above), so it is still too early to say that the programme is back on track.

If the review is approved by the Board, it would clear the way for an additional disbursement of US$1,059mn, bringing total disbursements to US$3,027mn since inception. According to the IMF, it would also help “unlock significant funding from bilateral and multilateral partners.” With the IMF programme nearly back on track and the SBP tightening monetary policy significantly, we think Pakistan’s macro outlook has improved considerably in recent days and that its reform story, while still likely to be hit by periodic slippages and setbacks, is on significantly firmer footing.

Pakistan’s eurobonds have rebounded on the news, with the spread on PKSTAN 7 ⅜ 04/08/2031s narrowing by 32bps at the time of writing. While we acknowledge that we have missed much of the upside from the recent rally, with yields sitting 75bps below the mid-October peak and much of Pakistan’s underperformance since mid-June now erased, a series of false alarms on IMF programme resumption had led us to adopt a more cautious approach.

With the spread on the PKSTAN 7 ⅜ 04/08/2031s still sitting c70bps above its mid-June low, however, and the outlook having improved materially with the policy tightening and possible resumption of the IMF programme, we think there is still some upside (with Board approval as a potential additional catalyst) and upgrade our recommendation from Hold to Buy for Pakistan’s eurobonds at a mid-price of US$101.56 (mid-YTM of 7.14%) at the time of writing on Bloomberg for the PKSTAN 7 ⅜ 04/08/2031s. 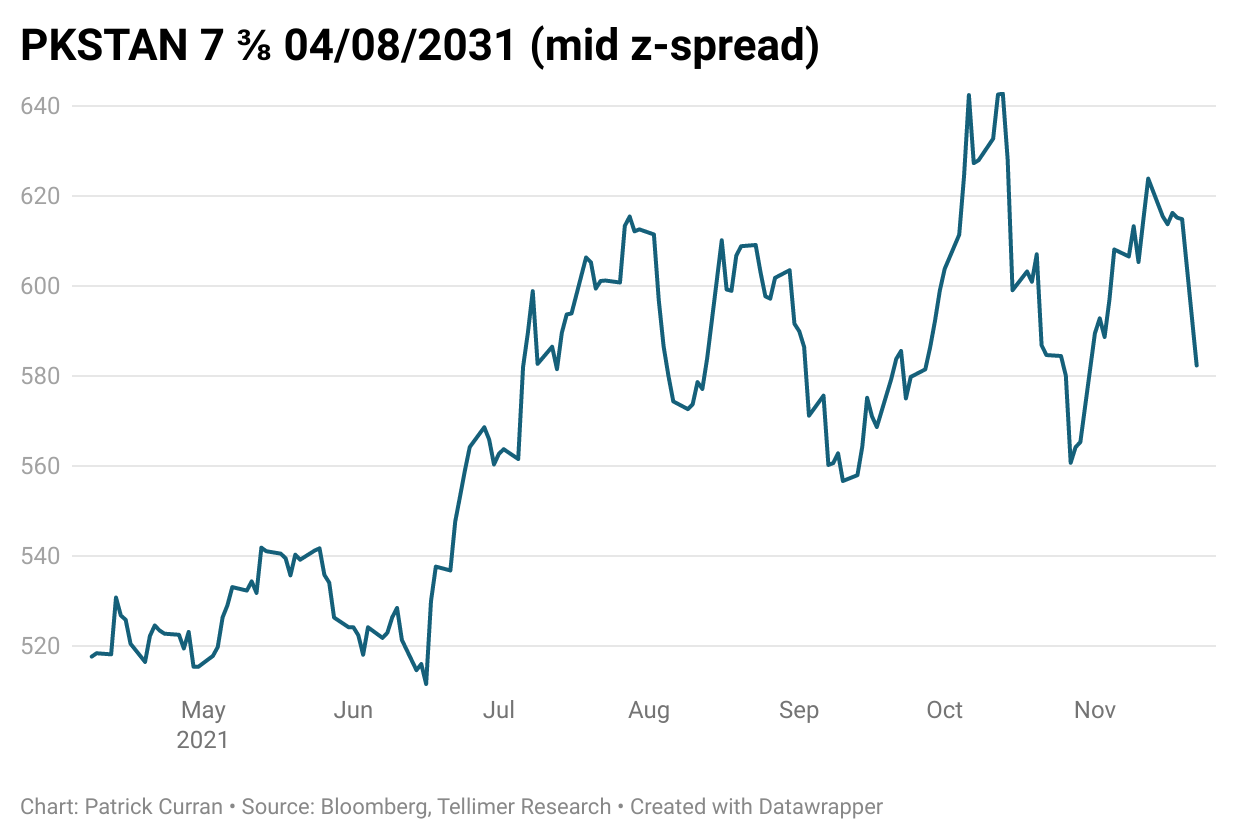 Pakistan equities are cheap and friendless

Pakistan equities, like most of the roughly forty emerging and frontier equity markets with weights below 2% to 3% of the MSCI EM index, have been long abandoned by foreign investors. But for periods in the past year, as with many of those markets, local investors have been drawn in by both prevailing negative real interest rates and the lure of smaller cap Tech companies.

Recent policy rate hikes (cumulatively, up 175bps to 8.75%), in response to inflationary pressure (9.2% yoy at the end of October compared with the trough of 5.6% at the end of January), have eliminated most of the negative real interest rate (now minus 0.4%) and a ferocious rally has now taken place in Tech names such as Systems Ltd (up 90% ytd in total US$ return terms). For locals, forward dividend yield of 7.1% is lower than the 5-year local currency bond yield of 10.3%.

For foreigners, low liquidity (US$56m average daily value traded over the past six months) compared with the EM behemoths is not going to change. But FX rate risks should decline and the bump in the road of domestic politics appears to have passed.

Valuation of the equity market offers attractive risk-reward in this context. Trailing PB is 1.0x (for 19% trailing ROE), a 23% discount to the 5-year median. Forward PE is 5.6x (for 10% 2022f consensus earnings growth), a 30% discount to the 5-year median. For foreigners, these are among the largest discounts to historical average valuation on offer in the emerging and frontier markets.

The FX rate is down over 8% ytd (down almost 14% since the April-May peak). A return to a REER of 100 would imply c3% appreciation and a return to the 10-year median REER would imply c7% appreciation. The risk is that a current account deficit of over 3% of GDP in 2022f, according to IMF forecasts, has downside risk should high commodity prices for imported fuel (c6% of GDP at US$78 oil price) and food (0.5% of GDP) persist, remittances (c7% of GDP) decelerate, and real GDP growth remain steady in 2022f at c4% (IMF).

FX rate vulnerability is high given that, prior to the release of additional IMF and associated lending, FX reserves import cover is merely 2.8 months. Therefore, the return of IMF finance is an important positive catalyst for the investment case for foreigners.

Re-tracked relations between military and civilian partners in government

The appointment of the new head of Inter-Services Intelligence (ISI) at the end of October renewed the political pact between the senior (Chief of Army Staff General Qamar Bajwa) and the junior (Prime Minister Imran Khan) partners in the government. The next challenges to this pact will come in the run-up to the expiry of Bajwa’s second term at the end of November 2022 and, then, the October 2023 general election.

Cooperative relations between the two branches of government (military and civilian) have played a large role in the repair of foreign relations and the management of the balance of payments and Covid crises since the July 2018 election.

Cooperative relations between the army chief, whether that remains Bajwa or another personality, and the prime minister remain key to the low risk of domestic political disruption (ie an opening for what remains discredited, in terms of political partners in the eyes of the military, and disunited opposition parties) and the continuation of stuttering structural reform of security (countering radicalism and preserving hard-fought gains), governance (addressing deep-rooted corruption), and government finances (eg tax collection and state-owned enterprise reform).