Pakistan is such a small market, with merely a 0.02% weight in MSCI EM, that one might reasonably ask why any foreign investor should care about it? The foreign outflows of the last five years are a testament to this.

For those foreign investors not enslaved by the tyranny of the index, jaded by many previous false dawns, or, simply, lacking the time to challenge obsolete concerns about safety and the integrity of the nation state, there is a hidden gem being fashioned.

This week's positive IMF review should instil confidence in the outlook for economic policy and next month's Senate election should increase the prospects of a steady political course under the leadership of the PTI and the military.

Of course, there are risks and potential setbacks: food price inflation and the oil price increase, financing challenges in the power sector, a deceleration in remittances, higher imports as growth picks up or an episodic escalation in the conflict with India.

But Pakistan equities and FX rate appear cheap relative to history – there is compensation for risks and setbacks. Indeed, portions of the equity market, eg the banks, appear cheap versus local currency government bond yields (traded value is overwhelmingly driven by locals and their inflows should act as a catalyst for a re-rating even if foreigners, in the case of large EM funds, are too distracted, or in the case of dedicated funds, too small).

Below, we also include our updated views on Pakistan hard currency government bonds, where the outlook is significantly de-risked by the restoration of the IMF loan. 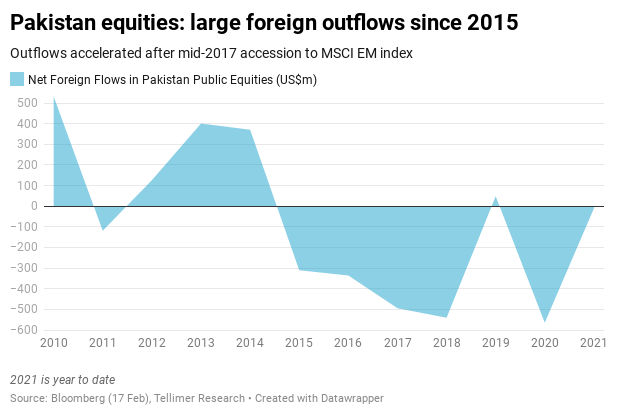 The positive IMF review this week (16 February) puts important sources of FX reserve generation back on track: both the remaining US$4.5bn of the loan, equivalent to c30% of current FX reserves, and the sovereign bond issuance enabled by the IMF stamp of approval.

Furthermore, the upcoming Senate elections, could well see the PTI increase its grip on policy (and, potentially, on constitutional change too), with, of course, the implicit support of the military-intelligence deep state. It is likely to emerge as the largest party in the upper house, in an election where half of the seats are being contested on the basis of votes from members of the provincial and national assemblies. 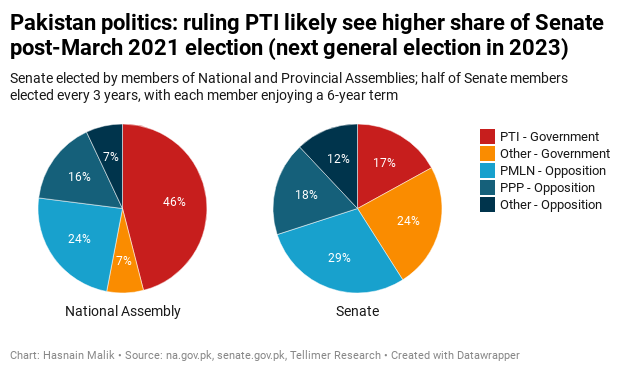 Structural reform is transitioning from the re-establishment of security (from 2012), to the clean-up of politics (from 2015), to serious economic reform (from 2019). And the structural reform story is surviving the Covid-19 shock, the apparently failing attempt of the established political parties (PMLN, PPP, etc.) to resurrect their fortunes via a protest campaign, the glacial progress towards co-habitation between the warring factions in Afghanistan, continual friction on the Indian border, and the long-term realignment of geopolitical relations from a combination of the US and Saudi Arabia towards China. 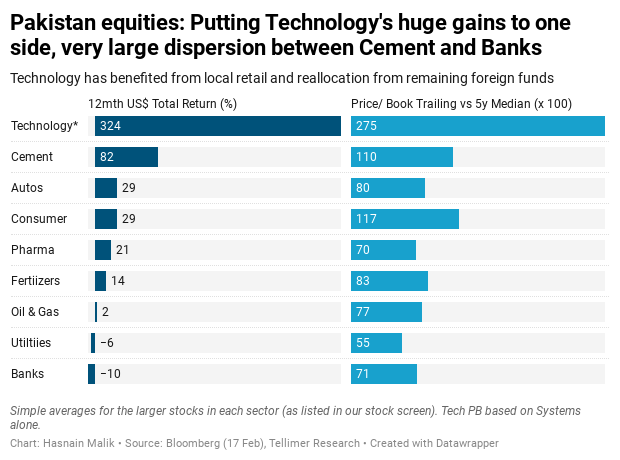 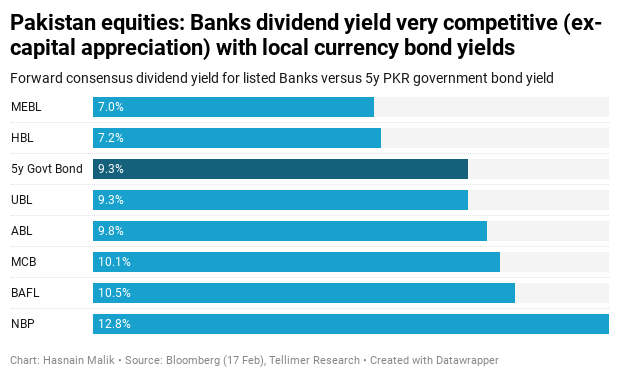 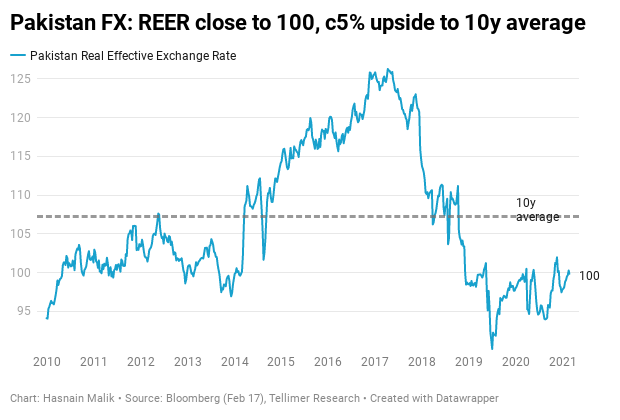 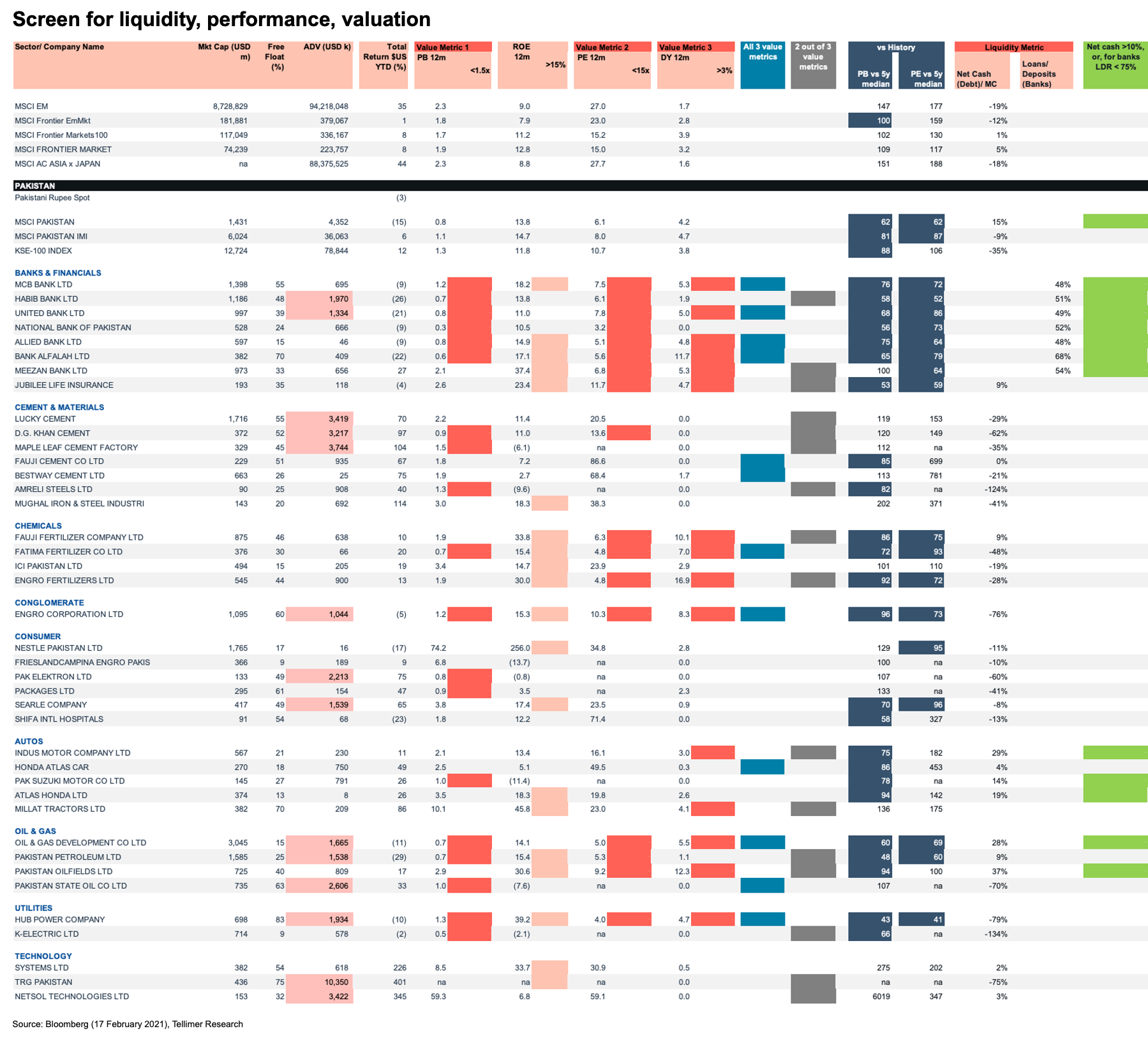 You can download the excel version of this stock screen for performance, liquidity, and valuation via this link.

We named Pakistani eurobonds as one of our Trades to Watch for 2021, having underperformed the EMBI in 2020 (albeit performing in line with B-rated peers). The view at the time was binary: the delayed IMF review sent a worrying signal about the government’s commitment to reforms and the prospects for balance of payments stability, while a resumption of the program would provide support for difficult reforms, alleviate external funding constraints, and could present some marginal upside for eurobonds.

While reserves have remained stable in recent months amid falling imports and strong remittances (leading to a small current account surplus in 2020), they are still woefully low relative to imports and external amortisations. With this in mind, the unravelling of Pakistan’s IMF program could have been a critical hit to the balance of payments, risking the loss of US$4.6bn of undisbursed IMF funding and an indeterminate portion of the US$38bn of other international funding the program was meant to unlock. Now the program is seemingly back on track, the risk of a balance of payments crisis has been considerably reduced.

However, there is still a lot of heavy lifting yet to be done. While IMF support will help keep Pakistan on track to meet ambitious fiscal and reform targets, we think slippage is inevitable given a difficult political backdrop and unrealistic budget estimates. In addition, recent requests to China for debt relief on outstanding power plant debt highlight the extent of financial difficulties and contingent liabilities in the power sector, and among state-owned enterprises more generally, that will continue exacerbate Pakistan’s debt burden and contribute to politically and economically costly power cuts.

On the other hand, if China acquiesces then Pakistan could see a material to its fiscal and external financing constraints, providing further potential upside. Pakistan has already received substantial relief under the G20’s DSSI, and we would see further participation by Chinese creditors as a positive.

Overall, the IMF program approval is a clear positive for Pakistan’s creditworthiness, but we await evidence of a return to Pakistan’s fiscal consolidation path and improved balance of payments outlook before upgrading and retain our Hold recommendation.

Pakistan: Time to get back on track (December 2020)

Corruption: The ugly truth for EM and ESG investors (July 2020)