Pakistan’s rupee and eurobonds have gained this week amid hope that its IMF programme will be restored, with newly appointed Finance Minister Miftah Ismail saying that the IMF has “largely agreed” to extend the existing programme from September 2022 to June 2023 after meetings last week in Washington D.C. The positive tone was echoed by an IMF statement, which cited “very productive meetings…over Pakistan’s economic developments and policies under the Extended Fund Facility (EFF) programme.”

Discussions on completing the 7th programe review, which has been delayed since the beginning of March after the previous government decided to reintroduce fuel and electricity subsidies, will resume during a staff visit to Pakistan in May. Ismael appears to have reversed his initial resistance to the immediate removal of fuel and electricity subsidies, with the IMF saying that “we agreed that prompt action is needed to reverse the unfunded subsidies which have slowed discussions for the 7th review.”

While ousted Prime Minister Imran Khan continues to push for early elections at well-attended protests, a recent poll shows that the majority of Pakistanis are happy with his ouster and the military has seemingly downplayed his claims of a foreign conspiracy. Meanwhile, the newly minted government of Prime Minister Shehbaz Sharif has, as expected, placed a high priority on resuming the stalled IMF programme, with Ismail speaking of the need for “belt-tightening” and “budget discipline.”

Their rhetoric has been largely positive, despite some initial concerns that they would cut development spending rather than subsidies to achieve the required consolidation, a move that would likely fail to satisfy IMF conditions. However, with Khan keeping the political temperature high, there is no guarantee that the new government won’t revert to populist policies to maintain support (indeed, Ismael implemented tax cuts ahead of elections during his last brief stint as finance minister in 2018).

Approval of the 7th review would unlock another US$930mn disbursement (of the remaining US$2,875mn), and some reports suggest that the funding could be sized up alongside the extension. This would be a positive development in the context of alarmingly low reserves, which reached just US$10.9bn (1.6 months of goods and services imports and 7.5 months of external principal payments) on 16 April. Pakistan is also seeking bilateral support from partners like Saudi Arabia to ease its funding crunch. 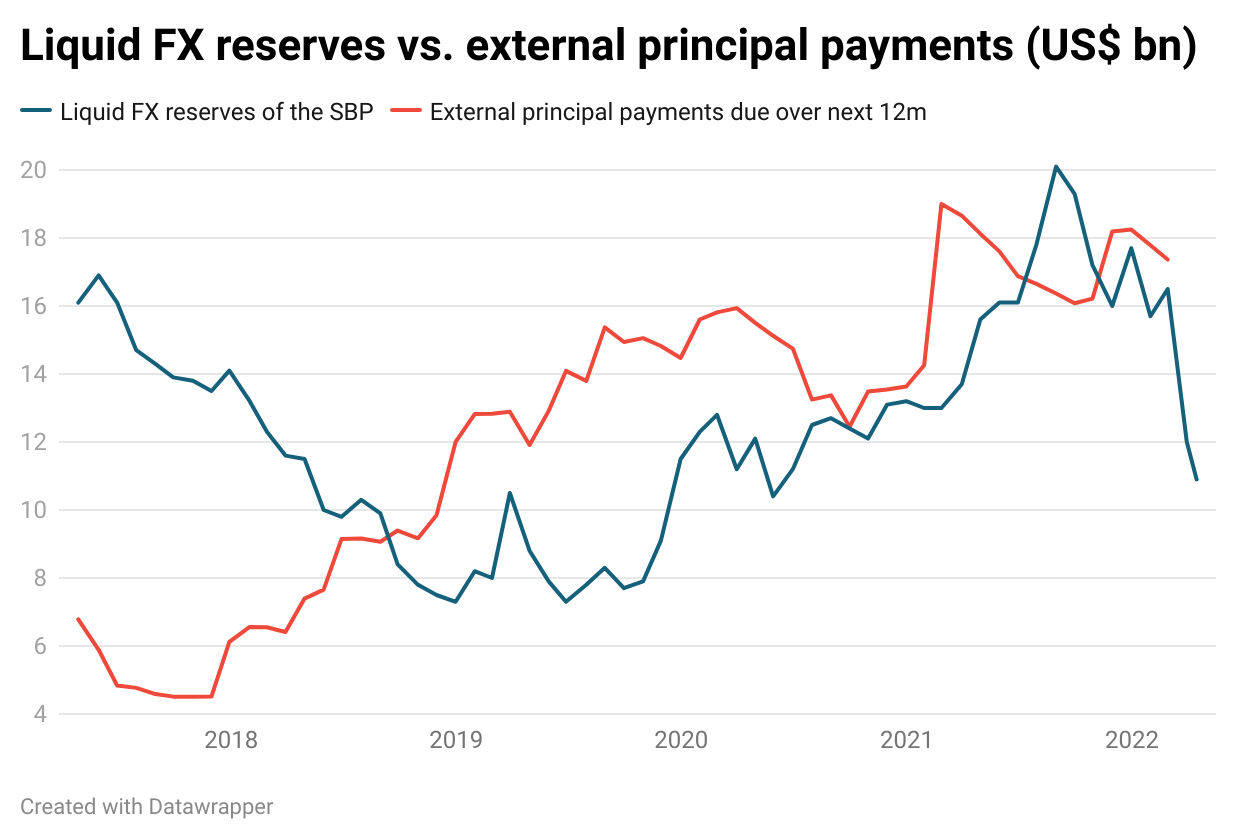 While Pakistan’s current account deficit has fallen to more moderate levels in February and March, it is running at an annualised 6% of GDP through the first nine months of FY21/22 versus the central bank’s rosier 4% of GDP forecast. Gross external financing requirements in FY22/23 are thus likely to be higher than the US$35bn (10% of GDP) projected by the IMF in February, highlighting how essential programme resumption is to avoid a balance of payments crisis (likely accompanied by further PKR depreciation).

Just as concerning, the Finance Minister recently projected a primary deficit of PKR 1.3tn (2.7% of GDP) for FY21/22, double the programmed PKR650bn (1.4% of GDP). This implies significant slippage in recent months, and suggests that heavy fiscal lifting may be required to attain even more lenient IMF targets. Despite the positive headlines, programme resumption is therefore not a foregone conclusion, and may require further politically difficult reforms (beyond the already contentious subsidy cuts).

Recent statements from the government and IMF are the first substantial sign that programme resumption is within reach. With the PKSTAN 7 ⅜ 04/08/2031s trading at a yield of 11.86% (934bps z-spread), there could be substantial upside if the programme is put back on track.

While yields are unlikely to return to the 6.5-7% range seen a year ago given the external shocks of higher rates and the impact of the Russia-Ukraine war, alongside the domestic uncertainty from the ongoing political drama and lower prospects for longer-term structural transformation, there’s c9pts of upside if yields contract to 10%, c13pts if spreads drop to pre-invasion levels, and c20pts if yields fall back to 8% (an unlikely upside scenario). 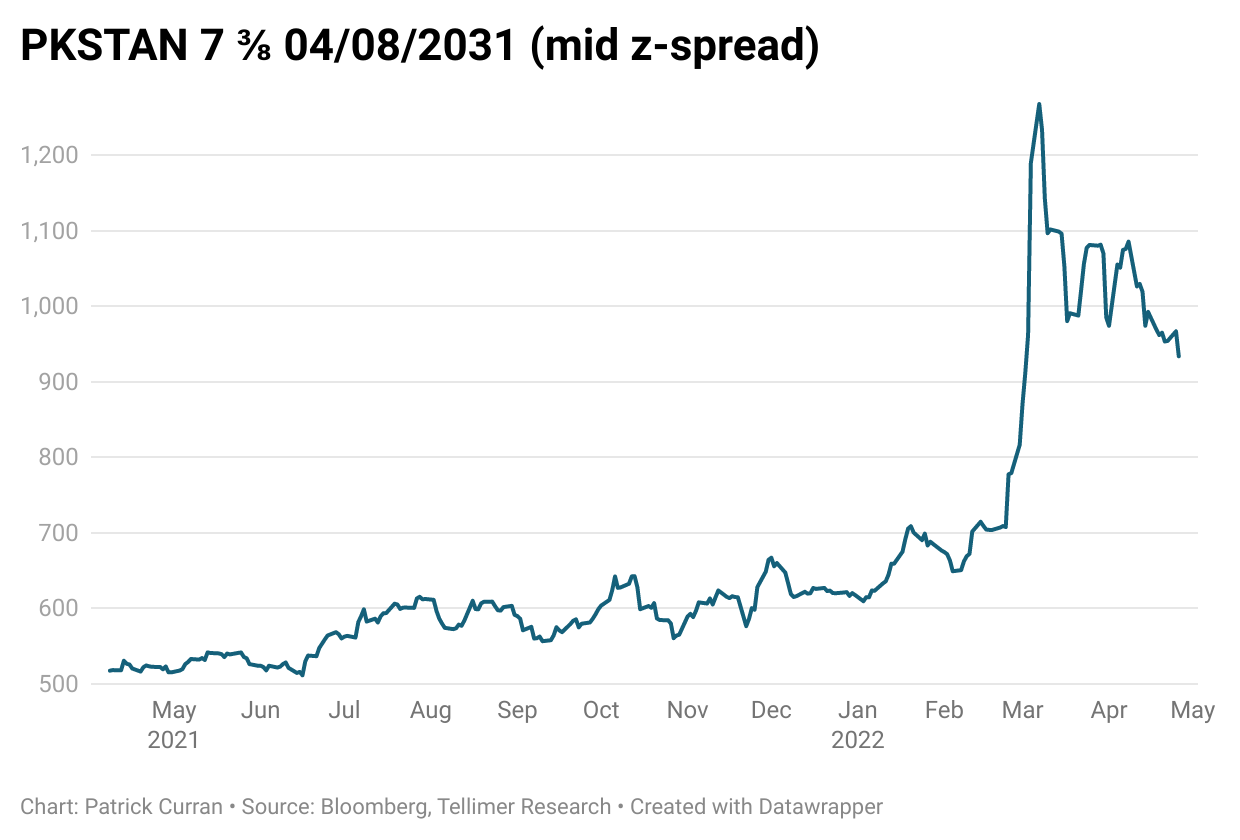 With regards to equities, Pakistan’s attractive valuation, with trailing PB and PE on 30% and 50% respective discounts to their 5-year medians, will be of little interest for fresh foreign capital until there is clarity over the IMF programme and the path out of the BOP crisis, because of the fear that Pakistan becomes another EM where capital is trapped.

While the discussions with the IMF are positive, the concern remains that without Imran Khan’s PTI in power there is no appetite for root and branch reform of governance. That is necessary to transform Pakistan from, at best, a short-term play on BOP improvement (which is very sensitive not only to the IMF discussions but also to global fuel and food prices), to something more structural.

Therefore, any developments towards an early election before the October 2023 deadline – for which the PTI’s unprecedentedly large rallies suggest their electoral prospects are bright – are arguably as important as IMF-related news for long-term investors.