23 May 2022
Published by
Tellimer Research

Pakistan: Rate hike provides breathing room but not enough on its own

The State Bank of Pakistan (SBP) hiked its policy rate by 150bps to 13.75% during Dr Murtaza Syed’s first MPC meeting as Acting Governor (see here for our recent discussion with the Governor), above the median expectation of 100bps among the 42 analysts surveyed by Bloomberg. This brings total hikes to 675bps since August and pushes the real interest rate back to marginally positive levels, with the MPC statement saying that "This action, together with much needed fiscal consolidation, should help moderate demand to a more sustainable pace while keeping inflation expectations anchored and containing risks to external stability." 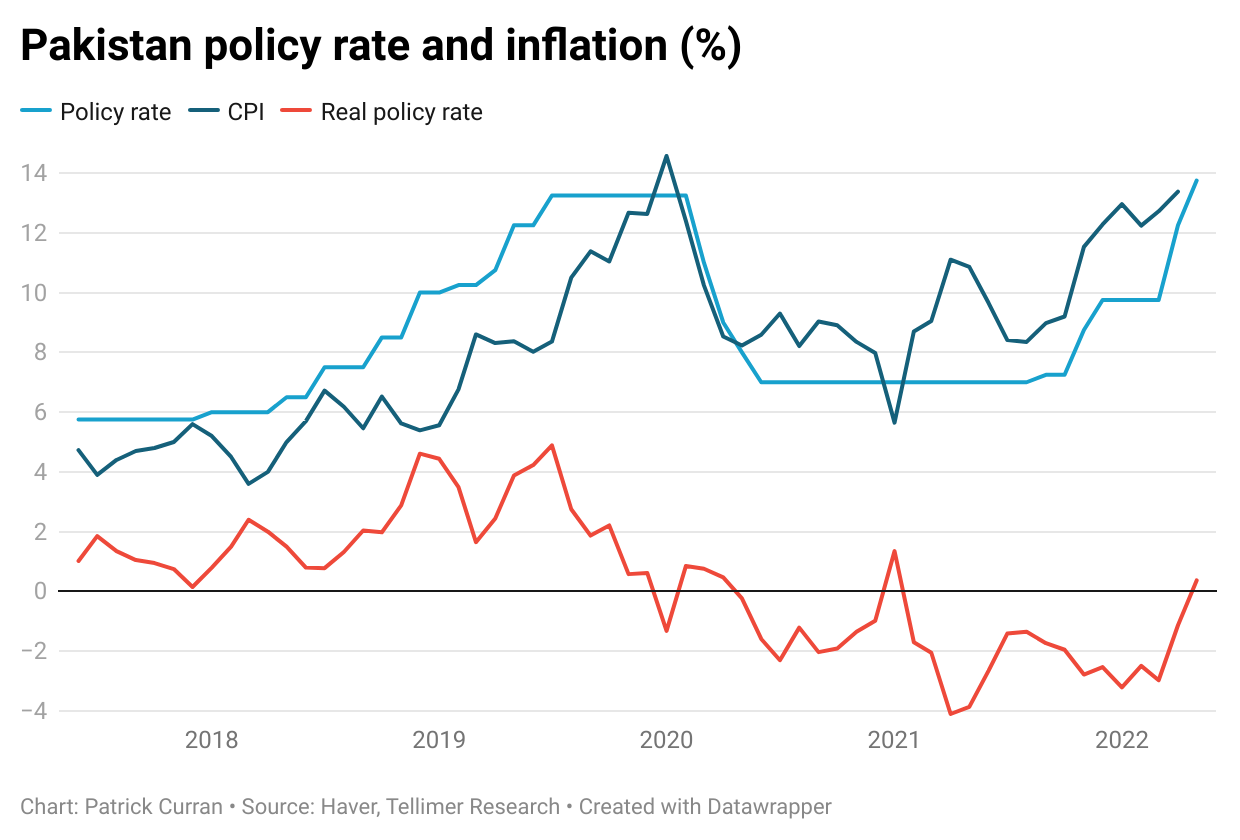 With FY 22 (through June 2022) growth now projected closer to 6% versus the initial 4-5% estimate and the output gap fully closed, the SBP believes it has room to cool the economy to prevent a de-anchoring of inflation expectations and further drawdown of reserves. Inflation reached 13.4% yoy in April (with food prices contributing 6.9ppts) and is projected to rise further in the coming months (driven by fuel subsidy removal) and remain elevated in FY 23, while the SBP's liquid FX reserves sit at just US$10.2bn (1.6 months of import and 6.5 months of external principal payments). The drop has been accelerated by some chunky debt redemptions, though the SBP expects a US$2.3bn CDB loan to be renewed soon.

An expansionary fiscal stance is exacerbating the overheating, with a primary deficit of 0.7% of GDP through the first three quarters of FY 22 versus a 0.8% surplus in the same period last year. Fiscal consolidation is therefore urgently needed, including via the removal of fuel subsidies, which the SBP assumes in its baseline forecasts. Besides the rate hike, the SBP has also taken steps to curb non-essential imports, which should help reduce pressure on imports at the margin (imports rose 46.5% yoy in the 10 months through April 2022, although c60% of this is due to fuel and Covid vaccines and imports volumes have started to contract across several major categories to offset the rise in prices).

On the other hand, Pakistan's balance of payments has been supported by a continued rise in remittances, which are up 6.2% yoy over the first 10 months of FY 22 and reached a record US$3.1bn in April. As import growth starts to moderate on the back of the SBP's tightening measures, the central bank projects that the current account deficit will moderate to 3% of GDP in FY 23 (from an annualised 5% of GDP over the first 10 months of FY 22). And indeed, we are finally seeing the first tentative signs of the deficit bottoming out, with the 3mma deficit falling by two-thirds from a record US$2.1bn in January to US$700mn in April. 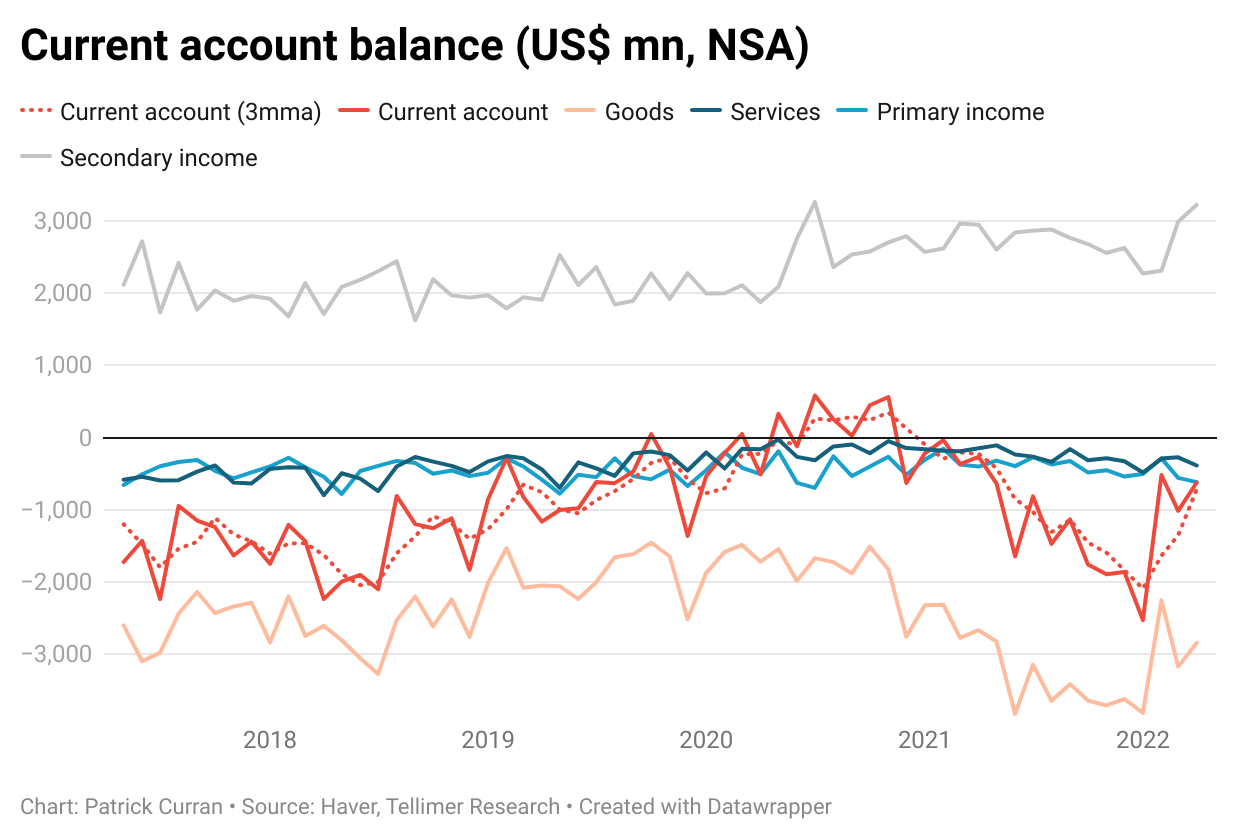 Even if the current account deficit declines, Pakistan's gross external funding requirement (GEFR) will remain high. The SBP projects GEFR of US$45bn over the next 15 months (Q4 FY 22 and all of FY 23) versus a financing pipeline of US$51bn, which should cause reserves to rise marginally over the course of FY 23. However, much of this pipeline is contingent on the resumption of the IMF programme, and by the SBP's admission, a failure to get the programme back on track will require a sharp reduction of the current account deficit to avoid a BOP crisis. This aligns with our long-held view (see related reading below) that Pakistan needs the IMF programme to avoid a BOP crisis.

IMF talks are currently underway in Doha, where the government hopes to reach an agreement on the 7th programme review in the coming days, which has been delayed since the beginning of March due to Pakistan's decision to reintroduce fuel and electricity subsidies. Despite some initial optimism that subsidies would be removed after the new government came into office, the government has decided to keep them in place. And while the SBP expressed optimism that the 7th review would be concluded soon, Finance Minister Ismail says that the government will try to convince the IMF to provide funding without ending fuel subsidies, which is likely to be a difficult proposition and cause further delays.

Politically unpopular fiscal reforms will be especially difficult in the current political environment. Ousted PM Khan's popularity has likely increased since his removal last month, and he is planning a march in Islamabad this Wednesday to press the government to call early elections (currently due by August 2023). With the political temperature heating up and the cost of living on the rise, PM Sharif will find it difficult to remove subsidies. Conversely, if an early election is called, reforms and IMF talks will be temporarily put on the back burner, although this would likely result in a stronger reform mandate for whichever government emerges.

Today's rate hike will provide the government with some much-needed space to get its IMF programme back on track, but is not a replacement for the difficult fiscal reforms needed to reduce Pakistan's macro imbalances. A recent acceleration of PKR depreciation is also a welcome buffer, with the currency now down 12% ytd and breaching the psychological 200/US$ barrier for the first time. A continued commitment to a flexible exchange rate is necessary to prevent a BOP crisis, with further weakness likely in the months ahead (NDFs are pricing further deprecation to 260/US$ over the next 12 months).

While the risk of a BOP crisis is high if the IMF review is not completed, we think the risks are now largely priced in. The PKSTAN 7 ⅜ 04/08/2031s have sold off sharply since the beginning of the month with a 425bps spread increase pushing yields to a 15.5% and prices to US$61.6. The risk of default is high without an IMF programme, but public debt is just 74% of GDP after the recent GDP rebasing and recovery value could be near or even above current pricing (though a full DSA and recovery analysis is necessary to confirm this sentiment).

As such, we retain our Buy recommendation on Pakistani eurobonds at US$61.6 (15.5% YTM) on a mid-basis at the time of writing on Bloomberg. 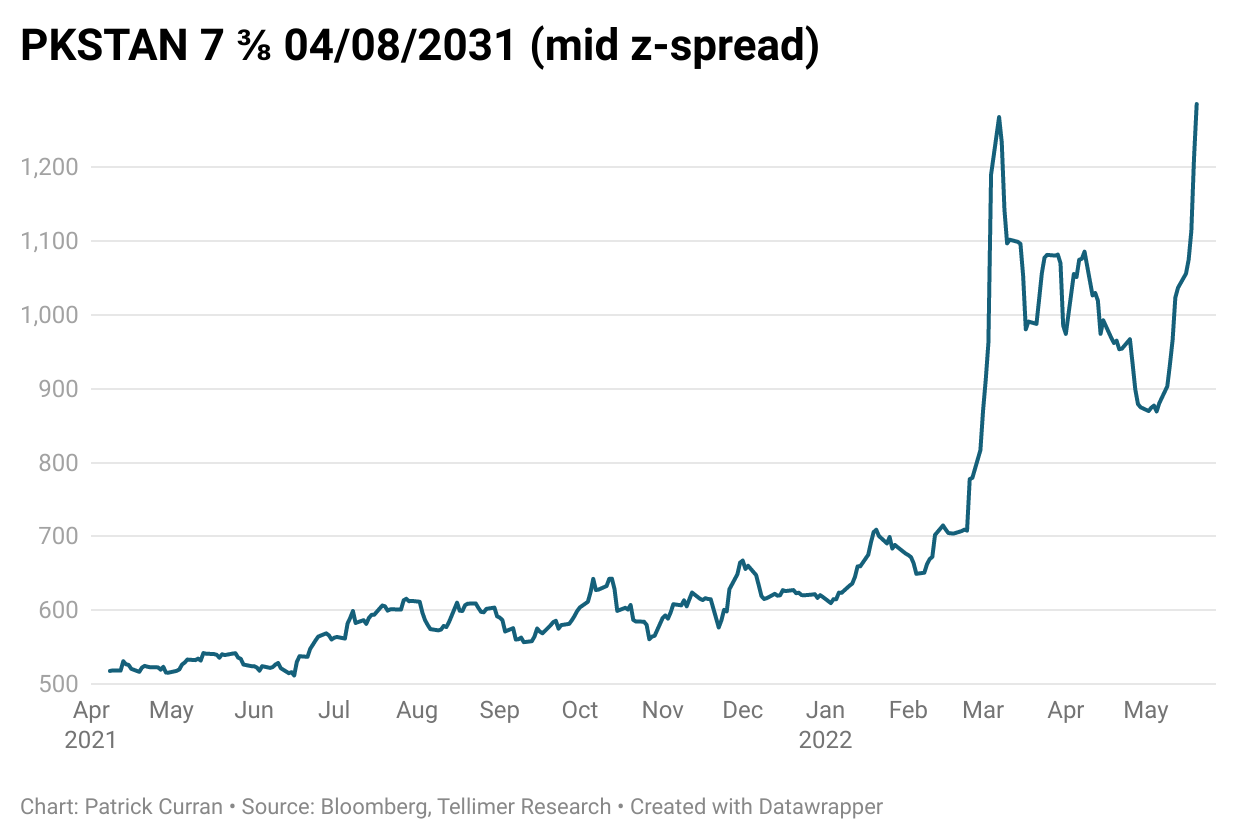