As Pakistan's political drama continues to play out and inflationary and external pressures mount, the central bank (SBP) responded forcefully by bringing up its MPC meeting scheduled for late April and hiking its policy rate by 250bps yesterday, bringing it to 12.25%. While the real policy rate is still negative, with inflation at 12.7% yoy in March, the SBP assesses it as being "mildly positive" on a forward-looking basis given its upwardly revised 11% average inflation projection in FY 21/22 (through June 2022) and projected moderation in FY 22/23. 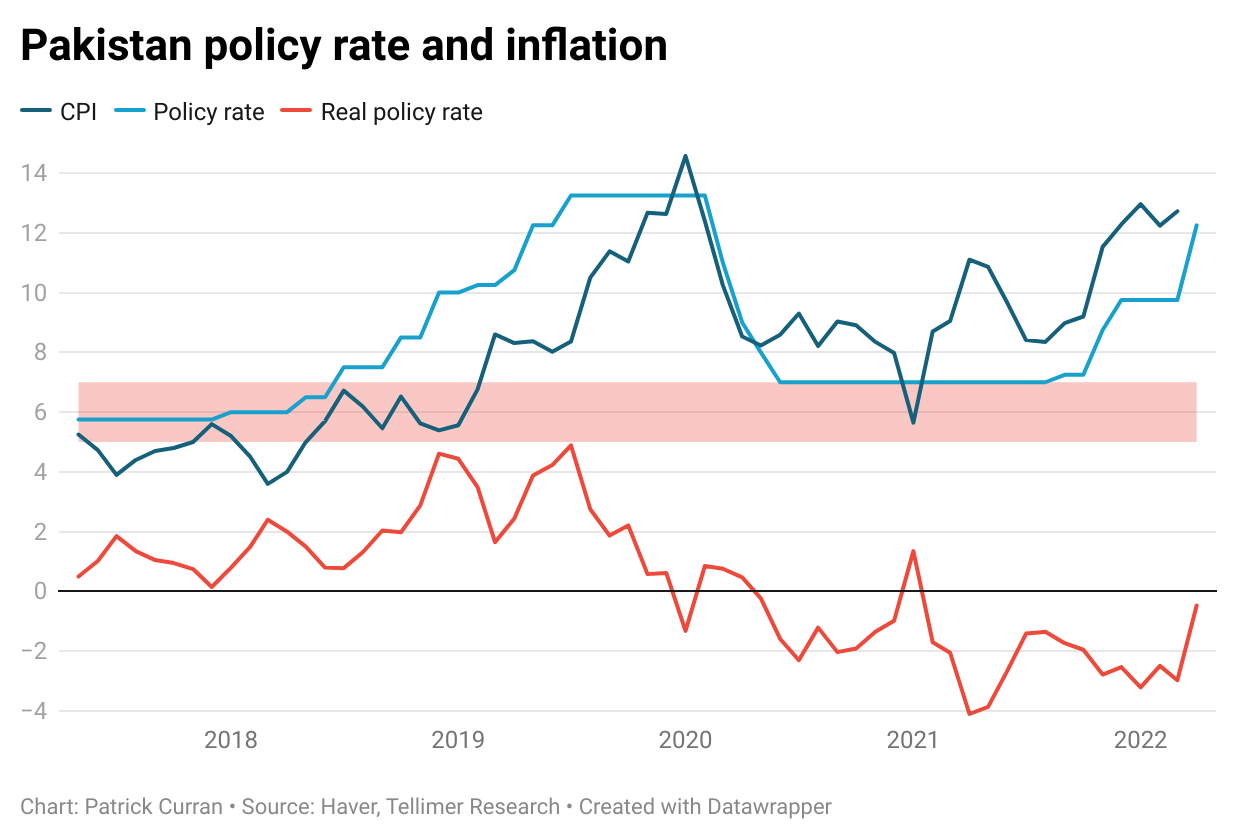 The decision is a positive one, if perhaps a bit belated following the decision to hold in early March despite rising imbalances, an easing of Pakistan's fiscal stance, and the negative impact of Putin's invasion given Pakistan's high exposure to fuel and food imports (see here for a more detailed look at all three points). Indeed, against this backdrop, SBP Governor Reza Baqir said in a post-MPC briefing that "We thought it's important to take decisive action." However, he also said that the SBP "is not planning to do anything more," meaning that it has likely reached the end of its hiking cycle.

It remains to be seen whether yesterday's hike will be enough to ease Pakistan's external imbalances. While the current account deficit eased from US$2.5bn to US$0.5bn in February on a 32% yoy rise in exports versus 15% rise in imports, elevated fuel and food prices will continue to pressure the current account and, on a cumulative basis, the deficit has reached US$14.9bn over the first 8 months of FY 21/22 versus a US$0.7bn surplus in the same period last year. Nonetheless, the SBP has held its FY 21/22 forecast steady at -4% of GDP, which it maintains is manageable given its current financing pipeline. 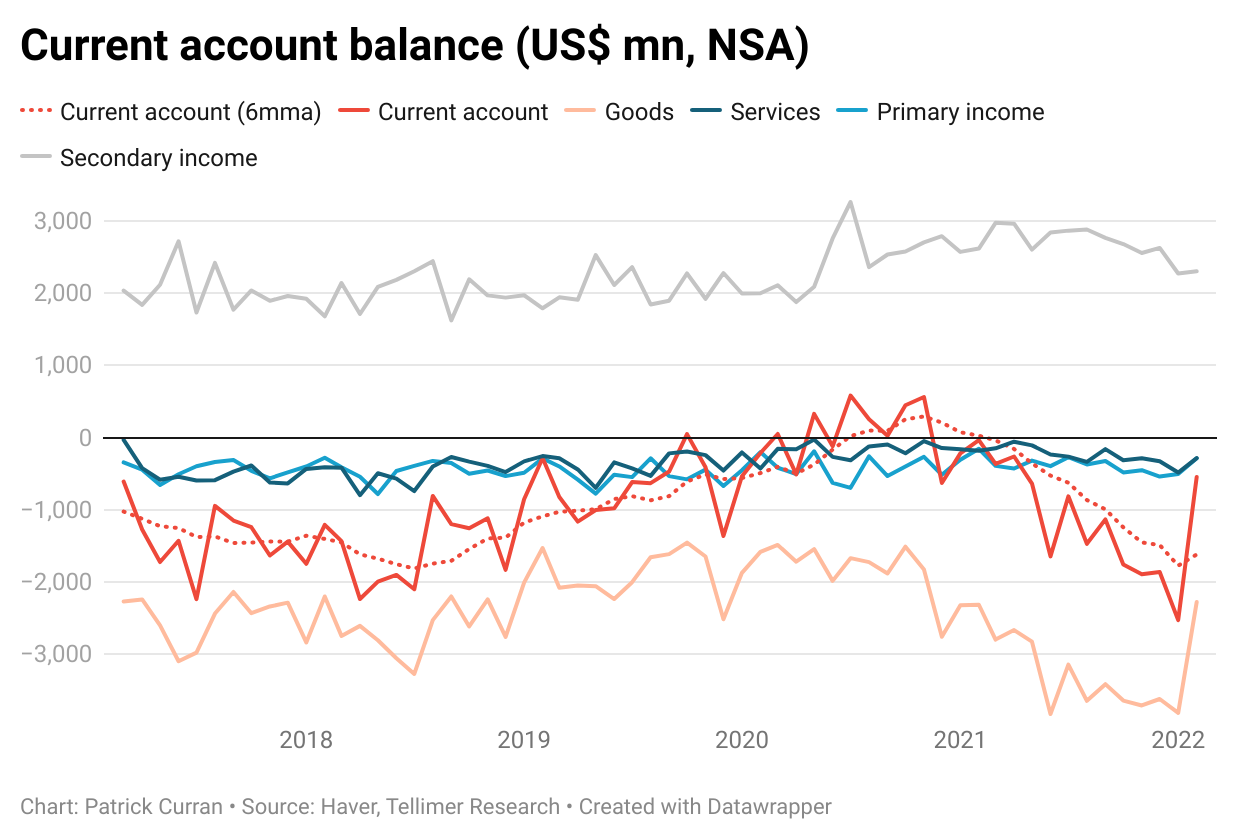 That said, reserves have dropped to alarming levels over the past few weeks amid large external debt payments, falling to just US$11.3bn on 1 April from US$17.7bn at the end of 2021 (although the SBP maintains that much of the cUS$3bn of maturing debt from the past couple weeks will be rolled over shortly, potentially reversing some of the decline). This equals less than 2 months of trailing imports and compares to over US$19bn of external interest and principal payments over the next 12 months, even before factoring out the US$4.4bn of FX forwards and swaps. 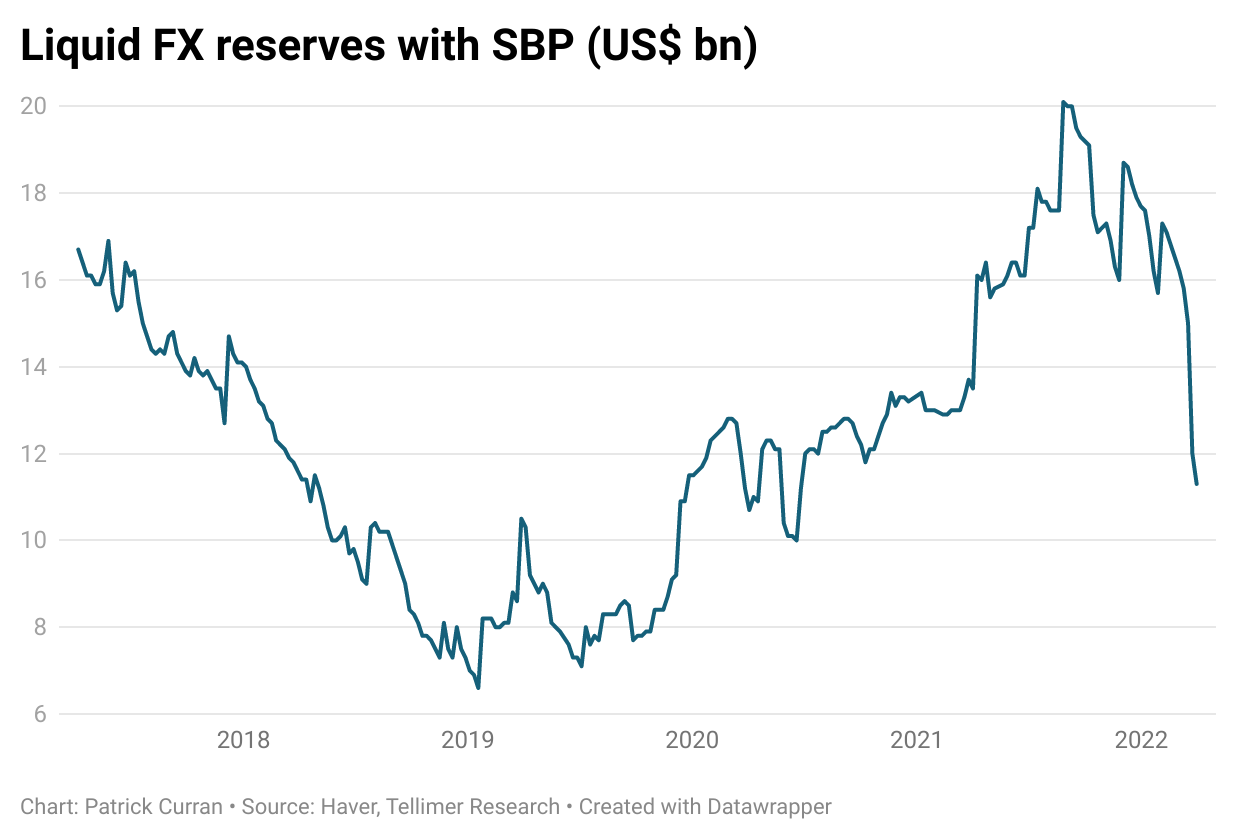 Despite the monetary policy tightening and other measures to contain the current account, like the imposition of a 100% cash margin on certain imported items and increasing the export refinancing rate by 3pp to 5.5%, we still think the resumption of Pakistan's IMF programme is necessary to prevent a BOP crisis. And the current political drama creates further uncertainty about if and when the ongoing seventh review will be completed.

PM Khan’s plans to hold early elections were scrapped by the Supreme Court yesterday. He will now have to face a no-confidence vote on Saturday, with initial indications that the opposition has sufficient support to throw him out, which will likely lead to a new government headed by PLM-N leader Shehbaz Sharif. While the longer-term reform outlook will be dented if PM Khan is removed from power, his removal would not necessarily signal the end for Khan, who could return in the next election. Further, even if there is a change in government in a restored parliament, there is still a high probability of early elections before the October 2023 deadline.

It remains the case politically that Khan and the PTI have increased their domestic popularity during the course of recent events, the opposition and the defectors from the PTI have been tarnished by the "foreign conspiracy" and "horse trading" narratives (that damage is far greater than any perception that Khan and the PTI have been judged by the Supreme Court as acting unconstitutionally in the cancellation of the original no confidence vote), the economy is no longer the central electoral issue, Khan's ability to campaign and organise rallies is more unconstrained should he find himself out of government in the coming months, and the main opposition leaders – Shehbaz Sharif of the PMLN and Asif Zardari of the PPP – remain under corruption-related criminal investigations and cases.

It is also still the case that all parties – PTI, the opposition, and any technocratic interim administration should there be early elections – accept there is no alternative to remaining engaged with the IMF, subject to delays resulting from any change in personnel. That said, with economic conditions changing fast on the ground, the longer the seventh review is delayed the greater the chance that the programme will have to be renegotiated to reflect updated quantitative benchmarks (and also potentially to provide spending or revenue offsets for the increased fuel and power subsidies).

The IMF said earlier this week that it "will engage on policies to promote macroeconomic stability, and enquire about intentions vis-a-vis programme engagement" when the new government is in place and that it looks forward to continuing its support to Pakistan, which seems to imply that there is still of a window of opportunity to get the programme back on track when a new government is in place, if it so desires.

Conversely, if the programme falls terminally off track, which is a distinct possibility, the risk of a full-blown BOP crisis would greatly increase. However, we believe this risk is already priced in, and that resumption of the programme could unlock some serious upside for Pakistani eurobonds (albeit less so than earlier in the year, given the current political backdrop and elevated inflation and BOP pressures).

In the meantime, yesterday's rate hike will buy some additional time for the government to implement needed reforms and reach an understanding with the IMF. This should be supported by further PKR depreciation, which is down just c6% ytd and will need to depreciate further to address Pakistan’s external imbalances (with 12-month NDFs priced 21.5% below the official rate). 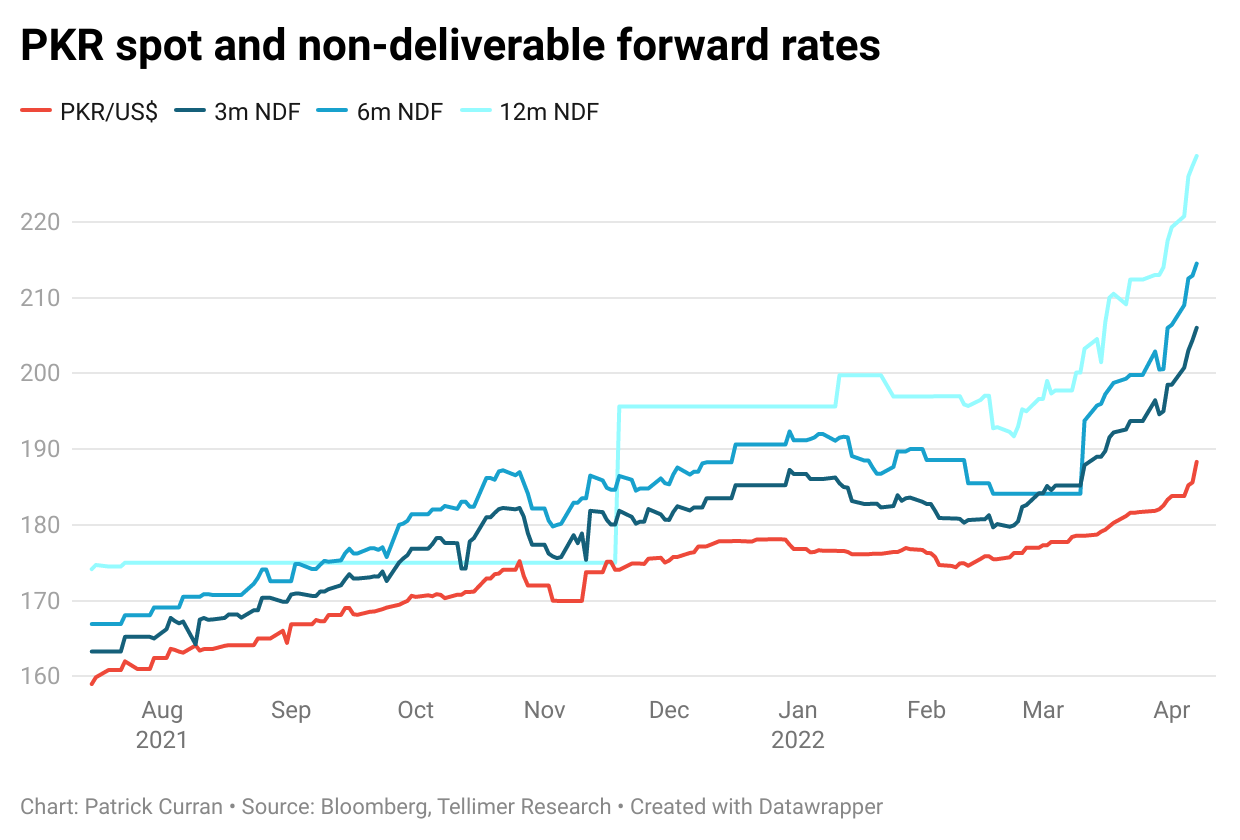 Despite elevated uncertainty, we still think Pakistan’s eurobonds offer some compelling value after their precipitous drop, with the PKSTAN 7 ⅜ 04/08/2031s falling by over 30% ytd to just over US$69 and z-spread rising from 618bps to 1076bps over that period. 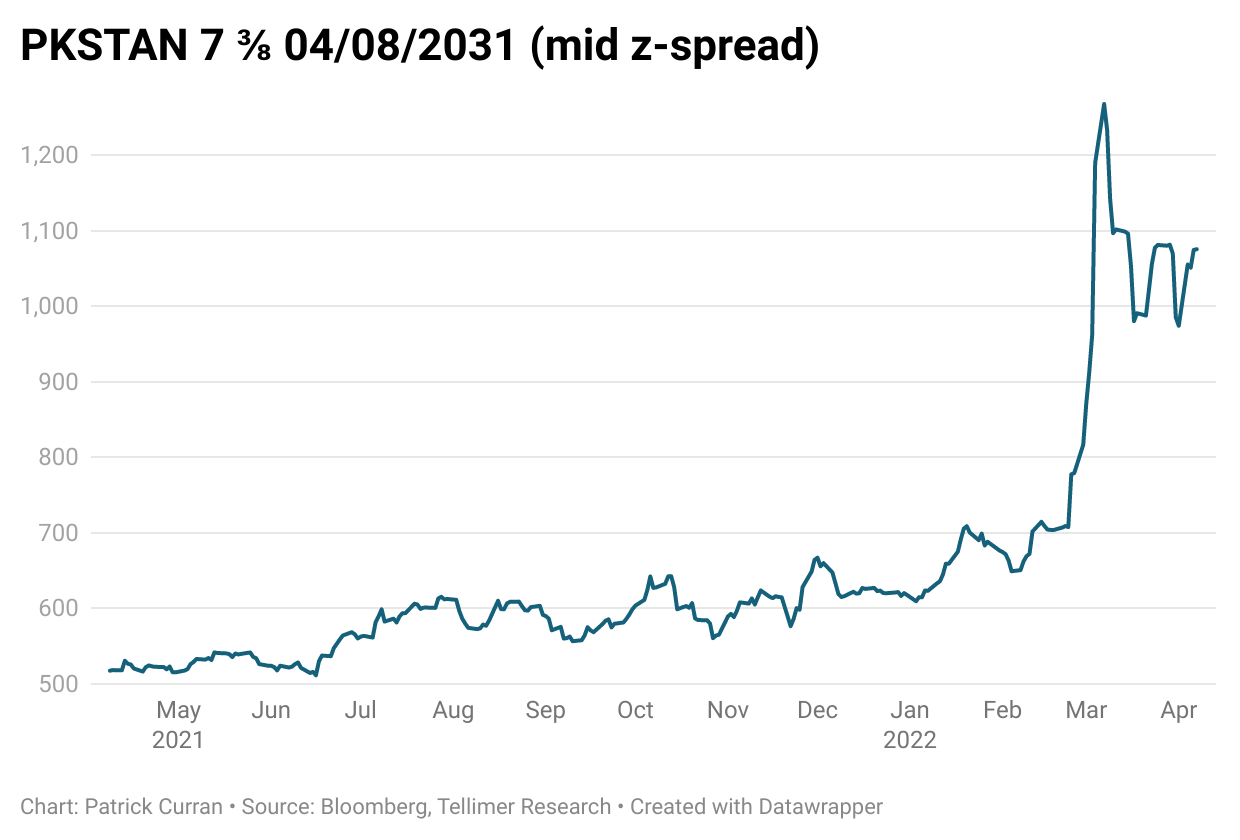