With 5,230 total confirmed Covid-19 cases as of 12 April, Pakistan ranks 33rd worldwide, and the growth is sharp (2,780 new cases in the past 10 days compared to 1,558 in the preceding 10 days). Total deaths are 91 (1.7% of confirmed cases) while recoveries are 1,028 (or 20%). Testing capacity is very limited and so far only c62k individuals have been tested (280 tests per 1mn population compared to the global average of 7,973), indicating that the actual number of cases could be much higher. The country is in a state of lockdown which began on 23 March and is currently scheduled to end on 14 April, but it seems unlikely to be completely lifted given that Pakistan’s Civil Aviation Authority (CAA) has extended the ban on flight operations until 21 April.

The intensity of the lockdown varies among provinces, with Sindh (administered by PPP) imposing a stricter lockdown compared to others. During the lockdown, some essential services like banks, groceries and pharmacies are running during the day, but there is a complete shutdown after 8pm. Adherence to the lockdown rules appears to be weak in many parts of the country with some reports of public clashes with police. 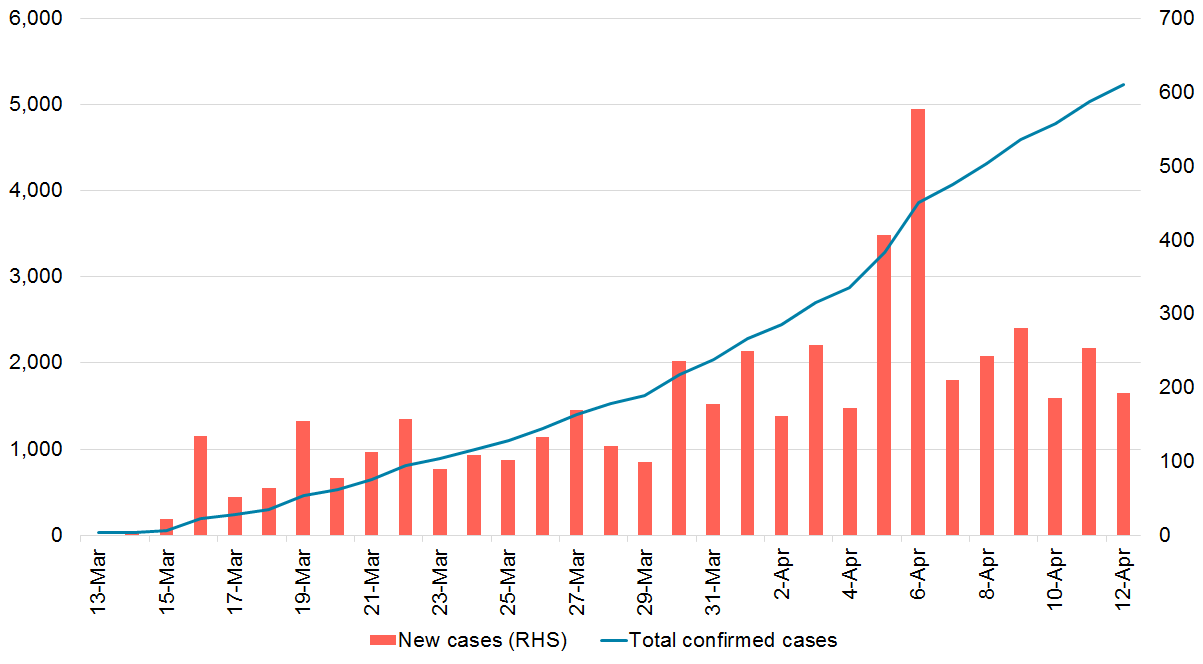 In terms of distribution, Lahore (20% of total confirmed cases) and Karachi (18%) are the most affected cities. In provinces, Punjab (53% of the total population) has been worst hit, accounting for around half of the total cases. 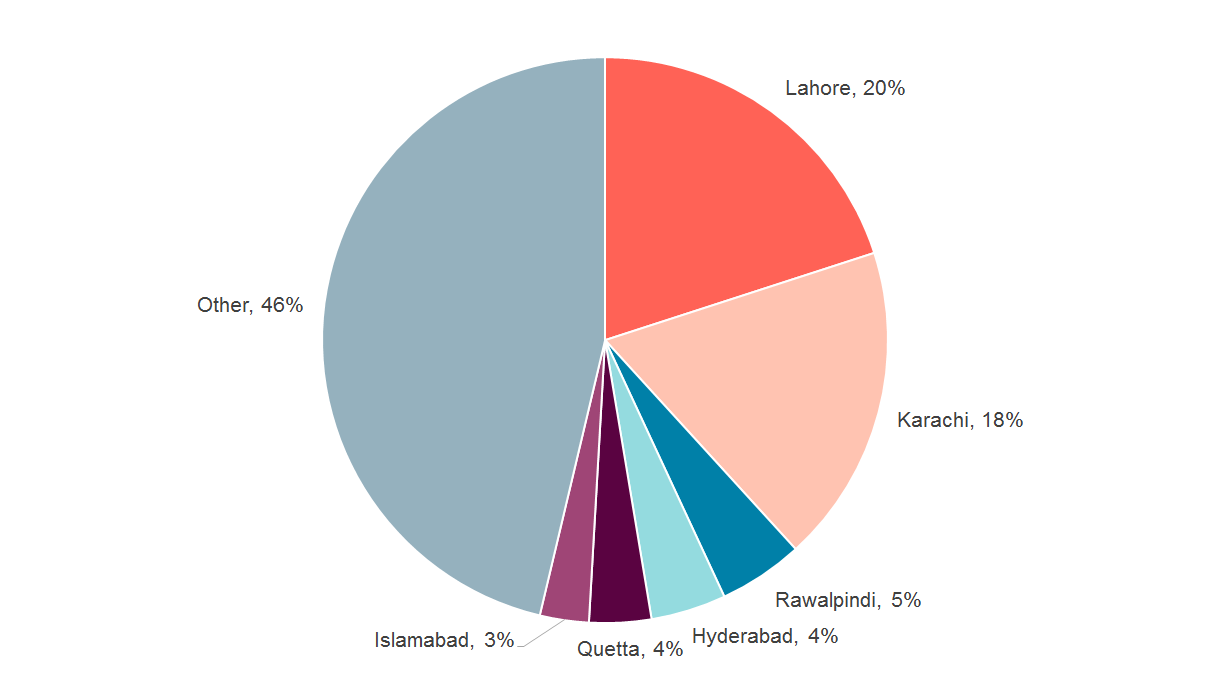 The economy is taking a big hit due to the lockdown. According to Google, public mobility has been greatly affected during the lockdown (down as much as 70% at retail & recreational sites, 40% at workplaces). The World Bank expects GDP growth to be in the range of -1.3% to -2.2% for the year-ended June 2020 (FY20) compared to its earlier expectation of 2.4%. For FY21, GDP growth is forecast to be just 0.9% (versus its 3.0% earlier expectation). The fiscal deficit is expected to remain elevated at 9.5% of GDP in FY20 and 8.7% in FY21. On the external account, the benefit of a lower oil import bill could be offset by weaker textile exports and depressed remittances. Regarding unemployment, a study conducted by the Ministry of Planning indicates somewhere between 12.3mn to 18.5mn people could lose their jobs (ie 20-30% of the working population). To mitigate the economic shock, the government has announced a  relief package worth cUS$7.5bn (2.7% of GDP). The State Bank of Pakistan (SBP – the central bank) has also announced support measures along with a 225bps decline in the policy rate to 11%. Separately, the government is seeking loans of cUSD3.7bn from multilateral creditors including the IMF, World Bank and ADB.

Current situation: Banks are currently open, but operations are limited (lower staff, number of branches and working hours). There has been a push towards digital channels for conducting transactions, with the SBP waiving digital transaction fees, relief packages being distributed through branchless channels and the general population’s reluctance to use cash.

Key policy measures: Reduction in policy interest rate by 225bps and CAR requirement by 100bps. One-year deferment of principal payments to Covid-19 hit borrowers without banks needing to classify them as NPLs, and more relaxed regulations on loan restructuring.

Our view: We think revenues and asset quality will come under pressure. Lower rates will hit margins along with lower fee income from trade and remittances businesses. Depressed economic activity will pile up NPLs in the system, though the relaxations allowed by the central bank could mask this impact in the short term.

Current situation: Construction activity in Pakistan has halted since the beginning of the lockdown period. As a result of this, local cement dispatches in March declined by 17% yoy and 14% mom to 3.2mn tons. We expect the dispatches for the month of April to witness significant decline.

Key policy measures: The government recently announced a major package for the construction sector, which we think is favorable for the cement industry. However, we believe that construction activity will take longer than expected to resume.

Our view: In the near term, we expect local cement demand to remain depressed due to lower construction activity. Cement prices are also likely to be disrupted for the next two to three quarters as manufacturers likely try to maximise their market share in a low demand period. Moreover, we expect export volumes to decline amid discontinuation of all modes of transportation as well as the economic slowdown around the world.

Current situation: The fertiliser industry has also been affected by this lockdown, with sales declining by 28% yoy to 295k tons in March 2020. Initially, the government forced the manufacturers to close their business operations, but later allowed both the dealers and manufacturers to operate from 8am to 5pm daily.

Key policy measures: Apart from the decline in interest rates and loan repayment relaxation, there has been no coronavirus-linked relief for the sector. However, in the recent times, the government has abolished GIDC (a fixed tax on per-unit consumption of gas) on both feed and fuel gas, which has resulted in the reduction of fertiliser prices by PKR400/bag (or 20%), providing some relief to farmers.

Our view: Demand for fertilisers could be disrupted in the short-term due to a potential harvesting crisis. According to The Express Tribune, the ripened summer fruits and a bumper wheat crop is on the cusp of rotting in the fields as a result of the absence of labour (due to the fear of getting infected) and transportation (due to the lockdown).

Current situation: Automobile companies have not been allowed to operate plants, and most showrooms have been shut down. A steep decline in car sales is expected to continue following the weak numbers (down 70% yoy) in March. While some assemblers, like Kia-Lucky Motors (a new entrant), has started online booking of cars, the physical delivery remains a challenge amid tight control on the transport of goods.

Key policy measures: Reduction in policy rate by 225bps, along with the deferment of principal payments for a year, should provide some relief in finance costs and might revive auto loans earlier than expected.

Our view: The recent Pak Rupee (PKR) depreciation (7.3% since March 2020) against the US-Dollar will most likely lead to an increase in car prices, as indicated by the companies’ managements, which could delay a pick-up in demand after the lockdown. The already thin margins are likely to take a further hit due to the closure of operations and trimmed sales, which may lead to an increase in borrowings for some OEMs, in our view. However, we believe a modest recovery will be in play during FY2021.

Current situation: In Pakistan, petrol pumps have been allowed to operate until 5pm in the evening. The consumption of petrol and diesel declined 15-30% yoy in March 2020 during the lockdown. Some oil refineries have been asked to curtail operations, which in turn has led to a significant decline in indigenous crude oil production – output from the affected oilfields has nearly halved.

Key policy measures: One positive development, however, is that the government has delayed the planned increase in gas and power tariffs until June 2020 (committed to the IMF, but could have been inflationary), backed by the precipitous decline in international oil prices. In addition, consumers have been allowed to defer utility bills until June 2020. The government has also decided to compensate energy companies for exchange losses due to the recent currency depreciation since the onset of the global outbreak.

Our view: Demand for oil and gas has slumped in the present environment, with schools, shopping centres and most industries closed countrywide. Downstream companies will be vulnerable to unfavorable movements in oil prices and the exchange rate.

Current situation: Food and pharmaceuticals are the two key industries that are currently operational, albeit with potential hindrances. A strong recent trend is the rise in online home delivery services; many traditional stores that did not have delivery services before have now launched one. Pharma companies, however, are starting to face supply issues as the allied industries (like glass tube manufacturers and packaging companies) remain shut. Some pharma companies are starting to run out of active pharmaceutical ingredients (APIs) and finding it difficult to procure imported supplies.

Key policy measures: The federal government announced a support package worth PKR200bn for low-income workers, where the government will provide a fixed amount of PKR12,000 to those families in need. This is in addition to provincial governments’ relief packages and various charity drives being conducted across the country. On the other hand, there has been no Covid-related relief for the pharma companies.

Our view: Demand for the consumer staples industry should be less impacted than others during the economic disruption, though some impact could be expected due to the overall higher unemployment and weak economic activity. Pharma companies may report weaker margins if the PKR continues to depreciate, mainly owing to more expensive API imports and their inability to fully pass on the increase in input costs.