Pakistan has finally secured Executive Board approval for the combined 7th and 8th reviews of its IMF programme, triggering an immediate cUS$1.16bn disbursement. The approval follows the staff-level agreement reached six weeks ago, with final approval delayed by the Board’s August recess. While the approval is not a surprise given Pakistan’s completion of the necessary prior actions and recent financing assurances, it is still a relief to see it formalised.

The IMF said in the accompanying statement that “the authorities have taken important measures to address Pakistan's worsened fiscal and external positions resulting from accommodative policies in FY22 and spillovers from the war in Ukraine” and said “going forward, continued tight monetary policy would help to reduce inflation and help address external imbalances”, and that “preserving a market-determined exchange rate remains crucial to absorb external shocks”. This is in line with our recent analysis.

The IMF projects real growth will moderate from 6.0% to 3.5% in FY23 (ending June 2023) and that inflation will average 20%, falling to 15% by next June from 25% in July. The primary balance is projected to swing from a 2.4% deficit to a 0.2% surplus in FY23, in line with government forecasts, driven mainly by a 2pp reduction in spending. This will see total public debt (including guarantees) fall from 78.9% to 72.1% of GDP this fiscal year.

In addition to the immediate disbursement of funds, the programme will be extended by 9 months through June 2023 and was augmented with an additional cUS$940mn of financing. It will also catalyse additional funding from third parties (including US$4bn of “financing assurances” from Saudi Arabia, the UAE and Qatar), with the SBP outlining a US$38bn external financing pipeline in FY23 versus estimated gross external financing needs of US$31bn.

Alongside a projected current account deficit of 2.5% of GDP in FY23 (down from 4.7% last fiscal year), this will push liquid FX reserves to US$16.2bn (2.3 months of imports) by the end of FY23 from the alarmingly low US$7.8bn on 19 August, which is equal to just 1.1 months of trailing goods and services imports and is dwarfed by the 12-month trailing current account deficit of US$17.7bn and external principal payments of US$18.9bn due over the next 12 months. 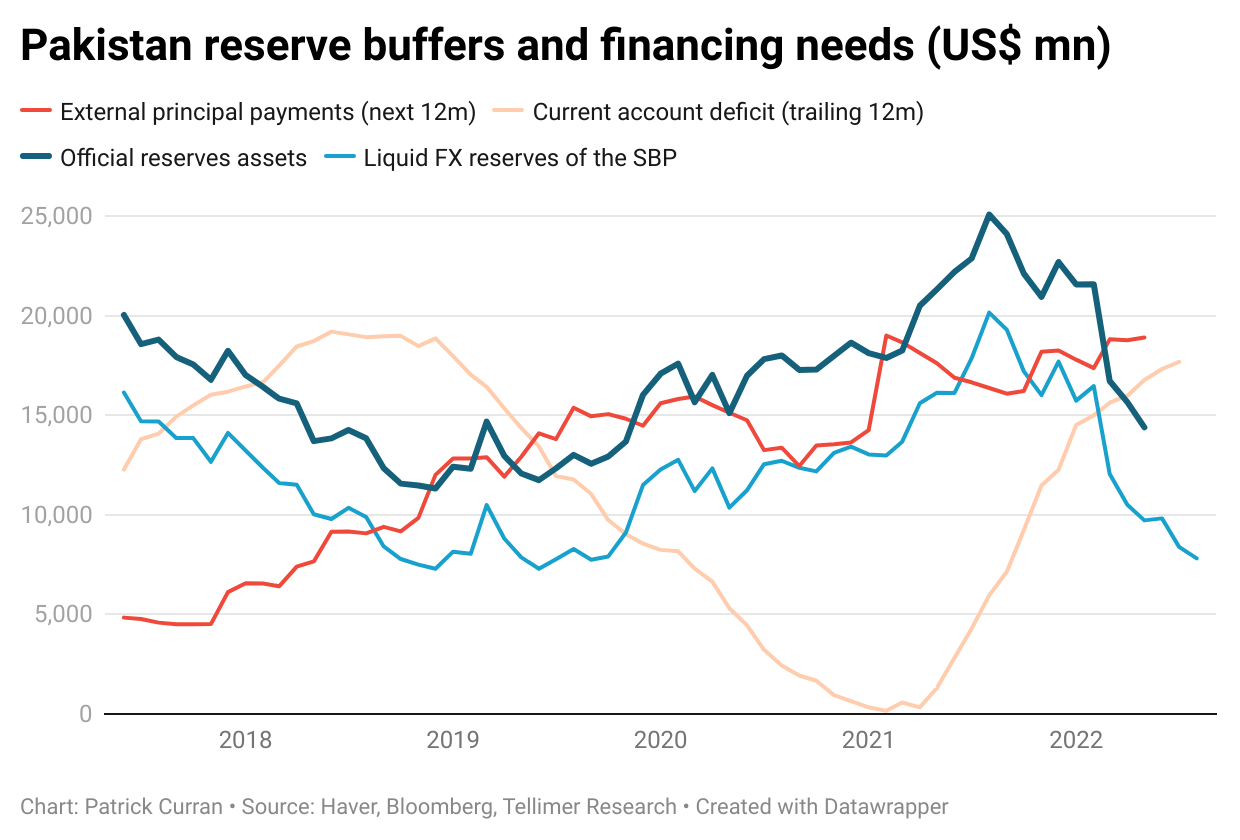 While IMF Board approval implies the IMF is sufficiently assured that Pakistan will be able to meet its large external funding needs, there is a material risk that the IMF’s current account forecast proves overly optimistic and/or Pakistan’s external financing pipeline does not materialise in full. In this case, renewed PKR depreciation and monetary policy tightening would be required to prevent a further drawdown of Pakistan’s reserve buffers and yet another unravelling of Pakistan’s IMF programme.

After rallying sharply in recent weeks in anticipation of Board approval, Pakistan’s eurobonds did not respond to yesterday’s news. Indeed, the z-spread on the PKSTAN 7 ⅜ 04/08/2031s actually widened yesterday by 27.5bps (albeit on thin liquidity due to the UK holiday) while the PKR depreciated by 0.37%. In part, this shows that Board approval was already priced in.

However, it also reflects concerns that Pakistan’s government will be unable to stick to its reform promises given elevated political uncertainty and elections due by next October. Any slippage from programme targets could land Pakistan back in hot water in light of its massive external funding needs, requiring renewed PKR depreciation and support from bilateral partners to avoid a BOP crisis.

Further, while recent data shows a decline in Pakistan’s current account and trade deficits, severe flooding in 3 of Pakistan’s 4 provinces threatens to undermine the recent improvement and worsen the growth-inflation tradeoff. The flooding has impacted an estimated 30mn households and the resulting impact on crop production has pushed Pakistan’s Sensitive Price Index to a record c45% yoy last week.

Climate change and environment minister Sherry Rehman told the FT that the associated rise in food imports will weigh on Pakistan’s trade balance and foreign reserves, presenting yet another unwanted shock to Pakistan’s external accounts. That said, the impact could be mitigated if it is offset by an influx of international support, either in kind or via fresh concessional funding.

Either way, Pakistan is clearly not out of the woods yet. The government will need to deliver on the reform promises it has made to the IMF to set its debt and reserves on a sustainable path, but the risk of a policy reversal will continue to loom since the recent reforms are likely to have a heavy political cost unless the economic benefits materialise by next summer.

Any deviation from its reform targets, however minor, could shatter market confidence and send the rupee and bonds back into a tailspin, and a longer track record of fiscal and external consolidation needs to be established before markets price the programme in a more meaningful way (although with the PKSTAN 5 ⅝ 12/05/2022 Sukuk trading above US$95, markets seemingly think Pakistan will be able to muddle through until at least the end of the year).

While Board approval removes a key downside risk for Pakistan’s bonds, we still think markets will continue to price the risk of programme slippage into Pakistan’s bonds and that the weak longer-term outlook for structural reforms will cap the upside, with the z-spread on the ‘31s compressing to 1000bps (c360bps inside current levels) in our upside scenario if Board approval is followed by several months of continued current account compression and adherence to fiscal and reform targets. 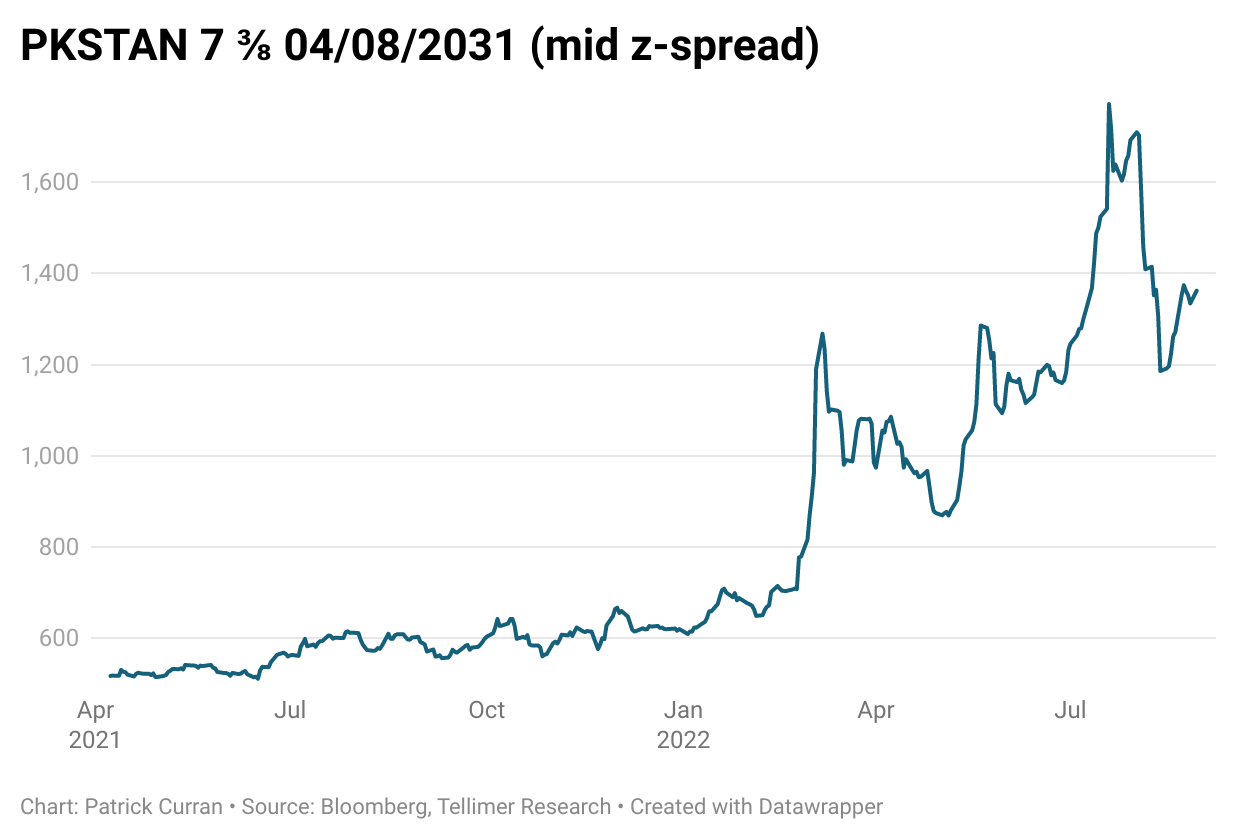