Pakistan’s eurobonds have been on a wild ride in recent weeks, rallying on the back of the approval of its IMF programme in August before falling fully reversing those gains in the wake of the catastrophe caused by historic flooding. The weakness only intensified last week amid headlines that Pakistan was seeking debt relief from the Paris Club, followed by Finance Minister Miftah Ismail's verbal resignation from the post on Sunday. We outline our initial thoughts on these developments below.

Prime Minister Shehbaz Sharif said on Friday in an interview with Bloomberg TV on the sidelines of the UN General Assembly that Pakistan was seeking debt relief to deal with the impact of the historic floods, saying “we have spoken to European leaders and other leaders to help us in the Paris Club to get us moratorium” and asking, “unless we get substantial relief how can the world expect from us to stand on our own feet?” He added in an interview that “all hell will break” loose if the gap is not closed between Pakistan’s growing external needs and what has been made available by international partners.

Sharif’s interview was accompanied by a story in the Financial Times referencing a leaked UN policy memo that proposed a suspension of international debt payments and restructuring of Pakistan’s external loans to free up money to respond to the current environmental crisis. The news prompted a sharp decline in Pakistan’s eurobonds, with the ‘31s falling by c7.5pts in early trading on Friday, the ‘24s falling by 9pts, and the Sukuk due this December declining by c11pts.

Finance Minister Ismail later clarified that Pakistan was not looking to restructure its commercial debt, saying that “we are not seeking, nor do we need to seek, any relief from our commercial bank debt nor from Eurobond debt” and adding that Pakistan has only US$8bn of Eurobond debt maturing between now and 2051, which “isn’t a burden.” Instead, he said that “we are seeking debt relief from the Paris Club’s bilateral creditor countries,” just as Pakistan received support under the DSSI during the pandemic.

However, markets did not seem to be comforted. After a brief rally, the ‘31s ended the day down 6.8pts and the ‘24s by 10.8pts, while the ‘22s ended the day down 6.9pts at US$87 (up by c4pts from the lows before Ismail’s comments but still a major decline). Despite the government’s stated intentions to remain current on its commercial debt, investors are likely (rightfully) worried that the Paris Club may seek “equal treatment” from commercial creditors if they agree to restructure Pakistan’s bilateral debt. 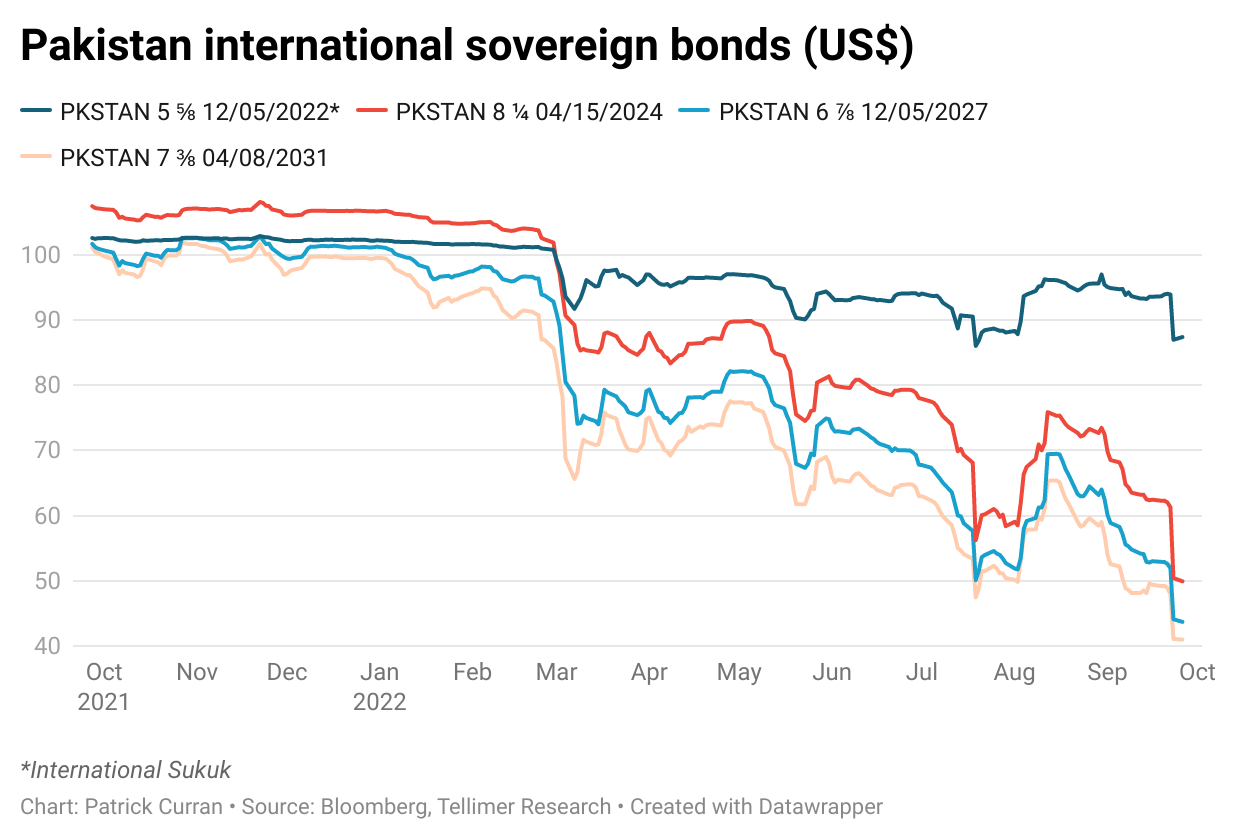 The IMF, too, could require restructuring of Pakistan’s commercial external debt before disbursing the remaining US$2.5bn of EFF funding if it no longer views Pakistan’s debt as sustainable. Prime Minister Shehbaz Sharif has reportedly asked IMF Managing Director Kristalina Georgieva to disburse the remaining funds immediately in response to the crisis, but the IMF is unlikely to cede such a major carrot for reform given Pakistan’s historically spotty record with reform implementation.

In any case, Ismail’s debt restructuring assurances ring hollow after his resignation over the weekend. He has been replaced by Ishaq Dar, who served as finance minister on three prior occasions (1998-99, 2008 and 2013-17). The reason for Ismail’s resignation is not clear, but there is speculation in the media that he was pushed out by those in the PML-N – including party leader Nawaz Sharif – who were opposed to the austerity measures he implemented to get the IMF programme on track (namely sharp fuel price hikes).

In Ismail’s five-month stint as finance minister, he saw Pakistan’s economy through an extremely difficult period and undertook numerous politically difficult decisions to restart Pakistan’s IMF programme and stave off default. It seems the PML-N, facing vocal resistance to their policies from ousted PM Imran Khan, has sacrificed Ismail now that he has completed much of the heavy lifting for economic reforms, allowing the party to distance themselves from those politically unpopular policies.

Ismail’s resignation is a major loss and his replacement by Dar, who is known for his strong preference for currency stability, is even more concerning. The PKR was effectively pegged during his last stint as finance minister, which was a driving force behind Pakistan’s growing external imbalances over that period. The shift towards PKR flexibility was a key pillar of Pakistan’s IMF programme and helped absorb this year’s external shocks (it is down c25% ytd), and a return to PKR stability would threaten Pakistan’s ability to keep its IMF programme on track and avoid a balance of payments (BOP) crisis. 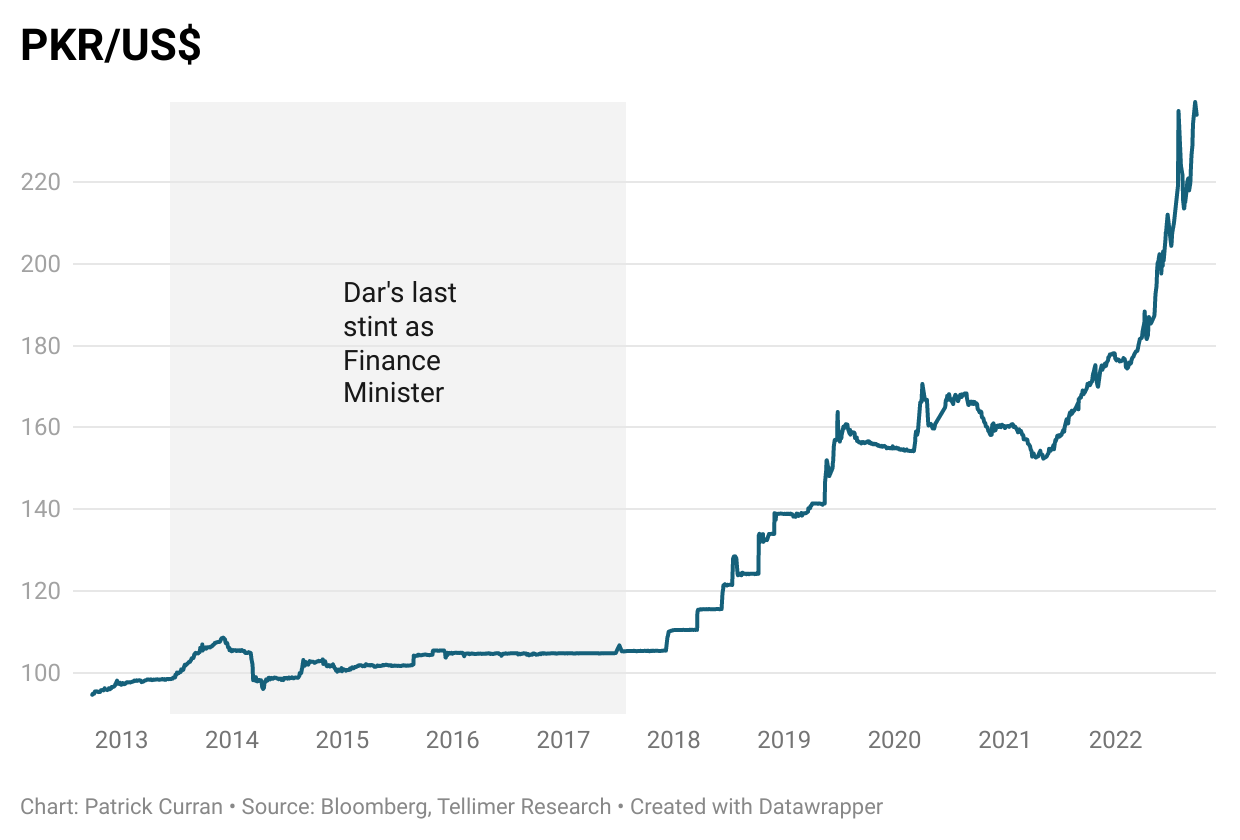 On this front, Dar’s initial rhetoric is very worrying. Speaking about his previous stint as financing minister on Monday, he said “interest rate was lowest, the growth was highest…reserves were highest, rupee was stable…So, we will be trying to get to that direction, that we stop the way the economy has been falling, and we change its direction." This seems to indicate a major policy shift away from stabilisation via slower growth, fiscal consolidation, and PKR flexibility to the model of above-potential growth and PKR stability that landed Pakistan’s economy in its current crisis in the first place.

Dar’s appointment also comes amid leadership changes at the central bank (SBP), with Deputy Governor Jameel Ahmed recently appointed as Governor after the departure of the well-respected Reza Baqir. While recent amendments to the SBP Act help solidify the SBP’s independence, investors may worry about the prospect of a coordinated loosening of policy if Ahmed proves to be less hawkish and/or more susceptible to outside influence than his predecessor, especially given his elevation over Acting Governor Murtaza Syed, whose appointment would have been seen as a sign of policy continuity.

Overall, we take Dar’s replacement of Ismail as a worrying signal that Pakistan’s government may be suffering from “reform fatigue”, with the set of domestic and external shocks that the economy is facing and associated political backlash to its economic policies finally prompting the government to calculate that the political cost of its reform agenda outweighs the benefits and opting to change course to protect its chances at the polls next fall. Indeed, PM Sharif lamented the “very tough conditionalities” imposed by the IMF during an interview with Bloomberg TV over the weekend.

Against this backdrop, the market response has been appropriate, with the PKR rising by 1.1% on Monday on the expectation of a shift in policy preferences towards currency stability, and eurobonds dropping by c6-11pts across the curve since Thursday. If this policy shift materialises it could derail Pakistan’s ongoing IMF programme, which would make default inevitable.

Adding to this is the risk that Pakistan’s commercial external debt is dragged into its plans to restructure bilateral external debt on the basis of “equal treatment”, the key motivation for the formulation of the Paris Club/G20s Common Framework for debt restructuring, and the path for Pakistan to avoid default is increasingly narrow.

That said, with Pakistan’s eurobonds now trading well below our estimated recovery value of US$53-71 at a 12% exit yield, we think the risk of restructuring is more than priced in. As such, even though developments since Friday make it increasingly unlikely that Pakistan can manage to avoid a comprehensive restructuring of its external debt, we still think its bonds are compelling from a value perspective based on the prospects for a recovery value above current prices. As such, we maintain our Buy recommendation on the PKSTAN 7 ⅜ 04/08/2031s at US$40.8 (24% YTM) as of cob on 26 September on Bloomberg.

Equities are cheap but political dysfunction needs to be resolved

Pakistan equities, measured by the local KSE100 index, are down 30% year to date, in total US$ return terms, the fourth worst performer in the Asia EM markets we track (with Sri Lanka the worst, at down 54%, South Korea down 38%, Taiwan down 31%, with Indonesia the best, up 4%).

The market is very cheap versus the historic average:

Some of the required foreign funding, eg from the IMF and the GCC, is being put in place and oil and food commodity import prices are finally softening. But a number of factors make it very difficult to justify a medium-term investment case. At a minimum, a renewed political mandate is needed to ground a top-down case in equities, even at this valuation.