Pakistan’s eurobonds, one of our top picks for 2022, have been among the worst performers this year as political uncertainty and reform fatigue have repeatedly derailed its IMF-backed reform programme and rising commodity prices, large gross external financing needs, and tight global financial conditions have weighed on reserves. By 27 July, at the time of writing, the Pakistan Bloomberg Sovereign Index had widened by 1,626bps (-41.3% total return) versus 143bps (-19.4%) for the Bloomberg EM Sovereign Aggregate.

We have repeatedly said that default is inevitable without the resumption of Pakistan’s stalled IMF programme, with a massive gross external financing requirement of US$41bn in FY 23 versus liquid FX reserves of just US$10.3bn (1.5 months of imports). While a staff-level agreement was reached with the IMF last week, which should unlock further financing and temporarily stave off the risk of a balance of payments (BOP) crisis, eurobonds and the rupee have continued to plummet since (with longer bonds falling below 50 cents on the dollar and PKR depreciation accelerating to over 25% ytd).

The weakness was driven by a by-election victory by recently ousted Prime Minister Imran Khan’s PTI over the weekend, prompting renewed calls for an early election (due by August 2023 at the latest) and associated concerns that the reform programme could fall back off track. This also prompted Fitch to downgrade Pakistan's credit outlook to negative yesterday on concerns of rising external vulnerabilities and risks to reform implementation.

There is certainly some merit to this caution given Pakistan’s weak track record with the Fund and a political backdrop that will make reform implementation difficult, with the PTI’s by-election victory seen by many as a referendum against Prime Minister Sharif’s reform efforts. This raises the risk that the ruling PML-N will either backtrack on its promises to bolster its chances at the polls, or that former Prime Minister Khan will reverse the recent reforms if he wins the eventual elections (which seems likely).

If this happens before Pakistan’s external position has improved sufficiently and/or external financing conditions have loosened, the risk of a BOP crisis and associated default will again rise sharply. That said, with the PKSTAN 7 ⅜ 04/08/2031s now trading well below both our base case recovery value of US$59 and our bear case of US$53 based on our June analysis and 12% exit yields, we think the risk of default is fully priced in.

While the upside is capped by political uncertainty and a weaker long-term reform outlook, if spreads on the PKSTAN 7 ⅜ 04/08/2031s drop to 1,000bps over time – double the c500bps spread that prevailed in early 2021 – this would imply 50% of upside. Further, downside is capped by our estimated recovery value even if Pakistan defaults (which, admittedly, is likely if they do not stick to their IMF targets).

The 15.5% current yield also provides further downside protection even if Pakistan defaults, but not right away, with the potential for bondholders to collect some hefty coupons if Pakistan makes a couple of payments first (the US$1bn sukuk due on 5 December still trades at US$86, suggesting that even the pessimistic market thinks there is some runway, although there could also be technical factors at play).

As such, despite an elevated risk of distress, we think Pakistan’s eurobonds are compelling from a value perspective, especially given the ongoing price drop and recent steps towards restoring its IMF programme, which the market has not priced in at all. We affirm our Buy recommendation on the PKSTAN 7 ⅜ 04/08/2031s at US$51.2 (19.1% YTM) as of cob on 27 July on Bloomberg (up from US$47.5 when this report was first published). 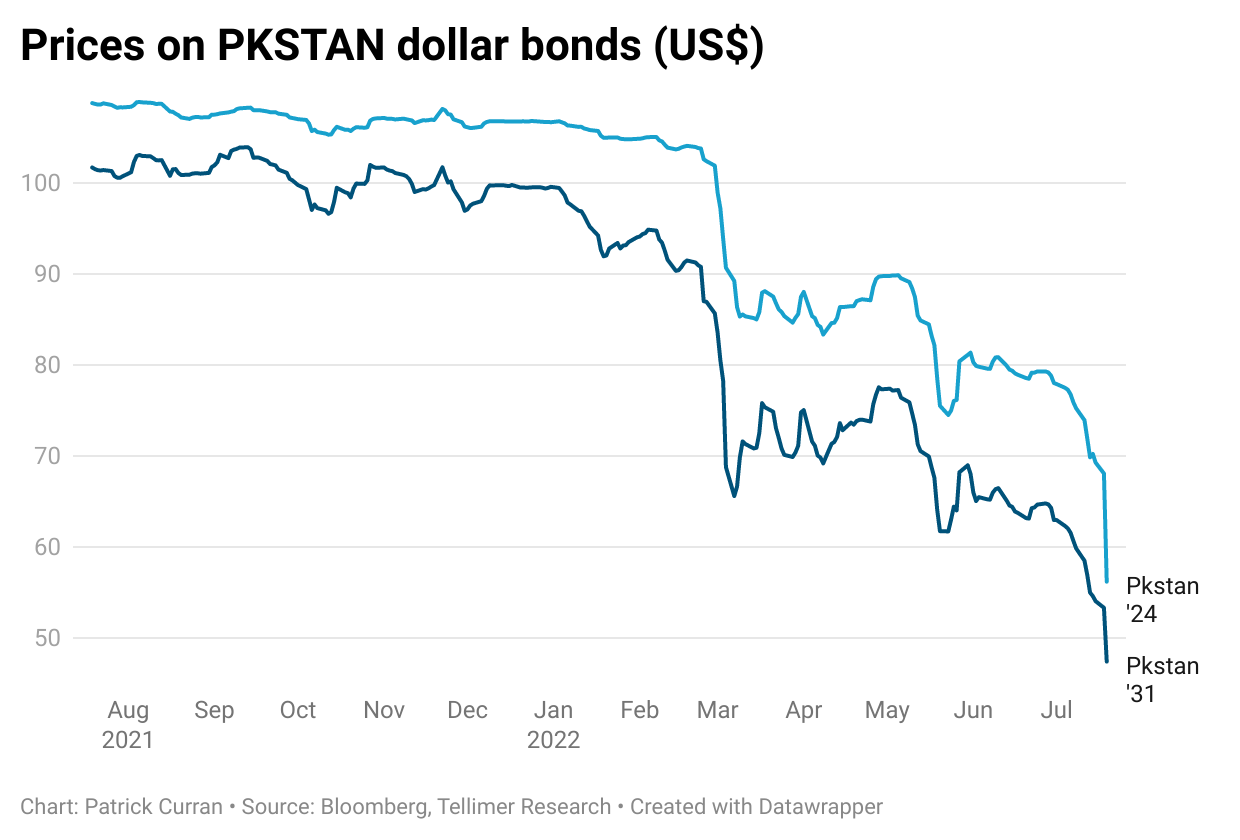 This is a new version of our Pakistan Top 5 report, with updated market pricing. For the original version and detailed profiles of our other Top 5 fixed income picks for H2 2022 – Ghana, Mozambique, Nigeria and Pakistan – click here.