We assign very low probability to Pakistan dropping to the "Black" list during the upcoming 13-18 October FATF meeting. The risk is material only because in the very unlikely event of this happening, the damage to the investment case for international institutional investors would be enormous. Below we look at the FATF issue in more detail.

We reiterate our positive Pakistan investment thesis, based on the following factors: 1) cheap equity valuations; 2) a looming peak in inflation and interest rate; 3) structural reform of security and governance and stable relations with the army under the PTI government; 4) economic orthodoxy (fiscal consolidation, inflation control, FX rate flexibility under the aegis of the IMF); and 5) better international relations (both with China because of CPEC and the US because of its withdrawal from Afghanistan, and even with India there is a limit to conventional conflict and mutual de-stabilisation because of the nuclear deterrent). The main risks are: 1) a spike in oil price (with knock-on current account deficit and FX rate devaluation pressure); 2) a setback in international relations; or 3) an overly long wait for a pick up in domestic and foreign direct investment.

Pakistan and the FATF

Pakistan is on the "Grey" list of the FATF (Financial Action Task Force), along with eleven other countries (e.g. Ghana, Sri Lanka, Tunisia in the markets we cover). In practice, the Grey list has no material restrictions on cross-border finance and investment, beyond additional scrutiny by international banks, whereas the "Black" list is a major impediment (only Iran and North Korea are classified on this list) and would essentially restrict fresh international capital inflow and impair recurring trade.

The next FATF meeting is scheduled for 13-18 October. This FATF meeting is particularly important (the FATF meets three times a year) because October 2019 is the deadline for certain remedial actions which need to be taken by Pakistan. It needs to demonstrate sufficient positive change in its anti-money laundering and counter-terrorist financing rules and actions to garner at least three votes (vetoes) out of the 39 FATF members (37 countries, the EC and GCC) in its support to avoid the "Black" list. In our view, the FATF should be viewed as a technocratic forum, when it comes to the assessment of rules and actions, but a geopolitical one, when it comes to the voting process.

We think a reclassification to the Black list is very unlikely for three reasons:

(1) The technical report released by the Asia Pacific Group on 2 October (which was composed after a visit to Pakistan in October 2018), is far from glowing but shows, in our view, enough compliance on recommended remedial actions. Indeed the compliance scores given to Pakistan are not that different from those given to another country on the Grey list, Sri Lanka, about which there seems to be far less speculation about a move to the Black list. (The Asia Pacific Group on Money Laundering is an inter-governmental body with 41 members, which provides technical assistance to the FATF, alongside similar bodies in other regions).

(2) Recent actions by the Pakistan government (which post-date that October 2018 visit by the Asia Pacific Group) should add weight to the case that there is positive momentum on taking remedial action: new law to enhance punishment for money laundering via the FX market, greater curbs on terror organisations, and fines by the central bank on private banks for anti-money laundering violations.

(3) The broader geopolitical context is more supportive compared to when Pakistan was put on to the Grey list in mid-2018: detente in US-Pakistan relations, ongoing cooperation with China, re-energised relations between Saudi and Pakistan (post-Khashoggi) and public displays of close relations between Pakistan, Turkey and Malaysia at the recent UN General Assembly.

Equities have recently rallied (up over 15% since the mid-August 2019 trough) after a long period of severe under-performance, whereas spreads on US$ sovereign bonds have widened since mid-September.

Equities, measured by the local KSE100 index, are down 19% ytd in total US$ return terms (half of this decline is explained by the 11% FX rate devaluation). Trailing price/book is 1.1x (with trailing ROE of 13%), a 37% discount to the 5-year median (whereas MSCI FM, FEM and Asia ex-Japan are closer to parity). The 2020f price/earnings is 5.0x (with 21% aggregate consensus earnings growth), compared to 10.2x (with 13% earnings growth) for MSCI FEM.

Equities and US$ sovereign bond performance and valuation 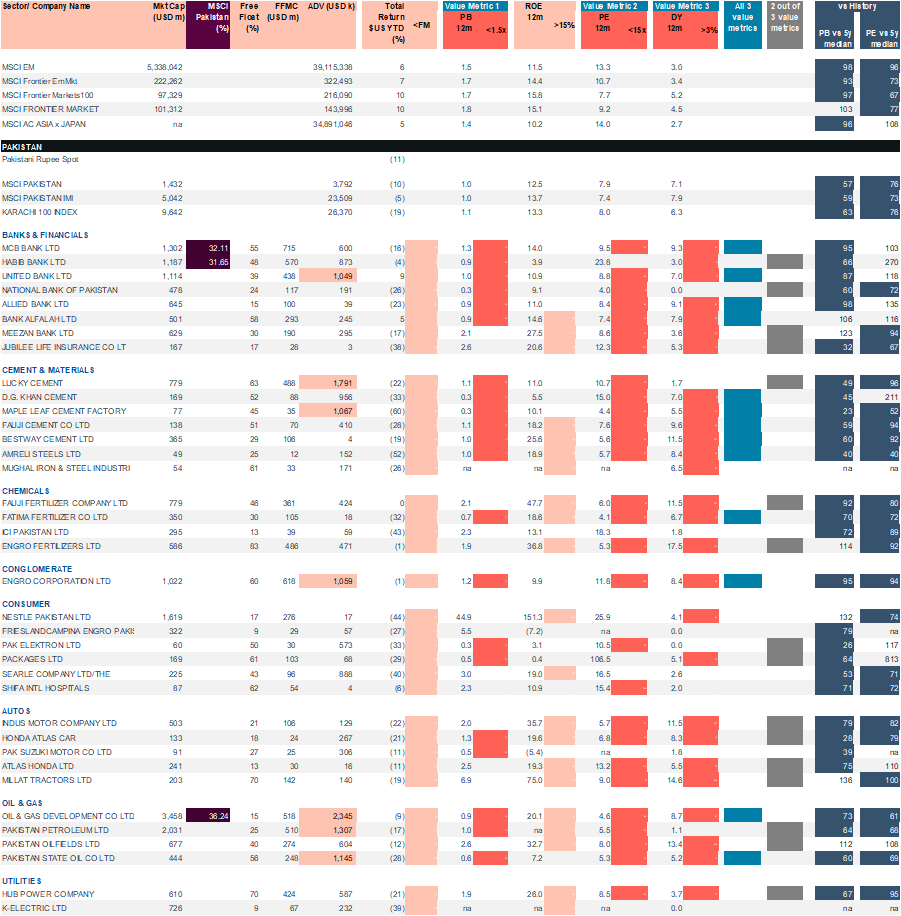