Pakistan eurobonds have recovered over the past week amid a broader EM rally, the government’s decision to hike fuel prices by 20% on Friday, and news that the government would soon agree to a power tariff hike of up to 45% in July. Pakistan’s refusal to remove fuel and electricity subsidies has delayed the 7th review of its IMF programme since March (including the most recent round of negotiations that concluded unsuccessfully last week), and the decision to hike prices should pave the way for the programme to be resumed once it is fully implemented and the FY22/23 budget is approved.

We have repeatedly said (see related reading) that a resumption of the IMF programme is necessary to avoid a balance of payments (BOP) crisis, a sentiment which was seemingly confirmed by Finance Minister Miftah Ismail last week when he said that key partners like Saudi Arabia, the UAE and the AIIB have refused to extend financing without the programme in place. A successful review would unlock the next US$900mn disbursement (of the remaining US$2.9bn originally due to be disbursed by September) plus an unknown amount of third-party support, helping to rebuild Pakistan’s flagging external buffers.

Pakistan has also reportedly requested to extend its IMF programme by one year and increase the financing package by US$2bn. It is unclear if the IMF will accede to this request given Pakistan’s track record of slippage from programme targets and uncertainty about the durability of the current government, with ousted Prime Minister Imran Khan staging massive protests to call for early elections. This could delay the finalisation of the FY22/23 budget and may make the IMF wary to approve the review if it is not certain that the current government will be around long enough to see its reforms through.

Even if the review is approved, Pakistan is not out of the woods. The SBP has only US$10.1bn of liquid FX reserves, equal to 1.5 months of trailing goods and services imports and 6.5 months of external principal payments. The SBP projects gross external financing needs of US$44.9bn from Q4 of FY21/22 through the end of FY22/23 versus available financing of US$51.4bn, which would see reserves rise by US$6.5bn over that period. However, much of that financing is contingent on a resumption of the IMF programme, and any shortfalls will require further PKR weakness and import contraction to avoid a BOP crisis.

That said, after the recent selloff Pakistan’s eurobonds have already priced in a high chance of distress. We argued last week, at the height of the selloff when the PKSTAN 7 ⅜ 04/08/2031s traded below US$62, that bonds were likely trading near or below recovery value, but that further analysis was needed to confirm this sentiment. In the note that follows, we conduct a debt sustainability analysis and BOP analysis to quantify the recovery value for Pakistan’s eurobonds. 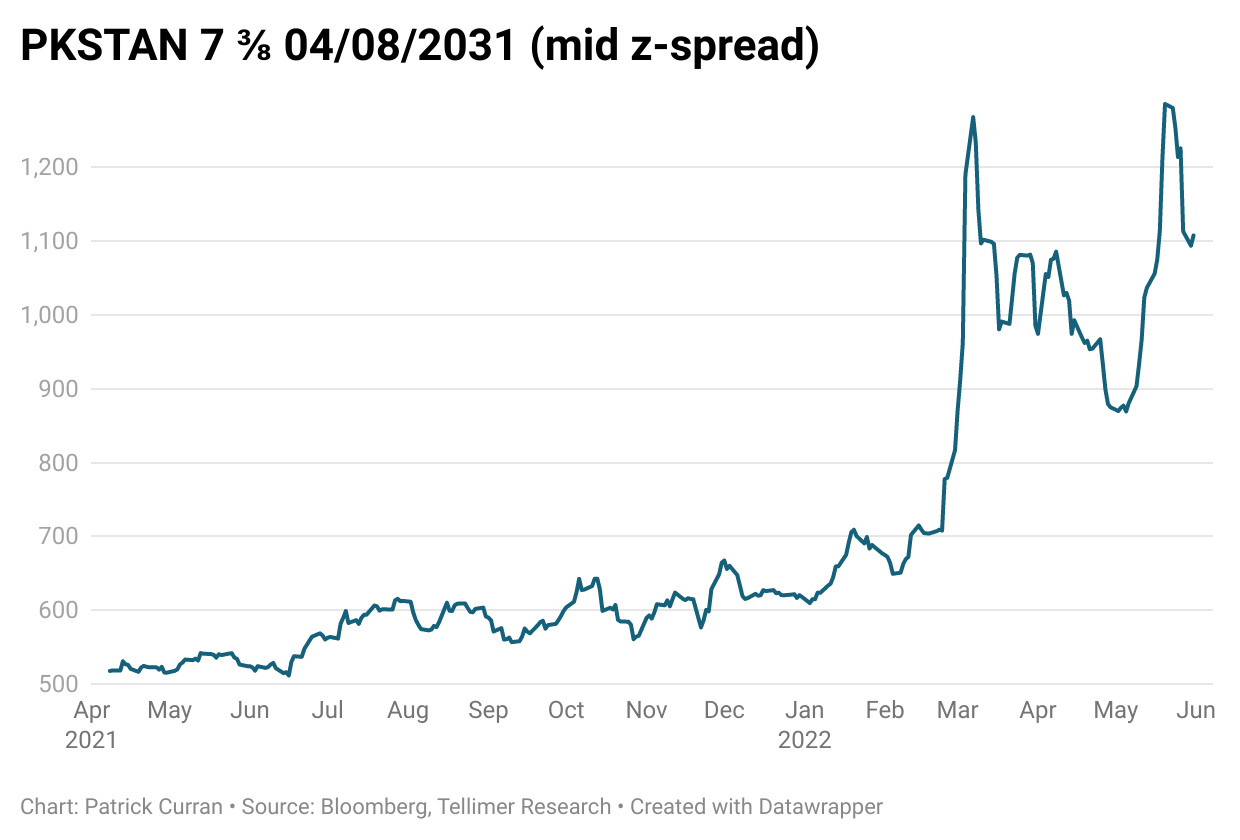 On this basic metric, Pakistan does not have an obvious solvency problem. Indeed, the IMF’s latest DSA in February classified Pakistan’s debt as sustainable. That said, our DSA shows some notable breaches in the ratio of external debt service to exports and revenue over the forecast horizon, and total public interest payments are projected to rise from c40% of government revenue in FY21/22 to c55% in FY25/26, both of which point to significant liquidity problems.

Further, applying a 1 standard deviation shock to IMF’s baseline real GDP growth and the primary balance forecasts (2010-19 standard deviation = 1% for real GDP growth and 1.35% of GDP for primary balance), increasing external and domestic interest rates by 200bps relative to our baseline (average interest rate on new debt of 5% for external and CPI +200bps for domestic), and applying a one-time 30% shock to the exchange rate, yields a significant worsening across these indicators.

Still, from a solvency perspective, we think there is little evidence of a need for nominal debt haircuts in Pakistan. Even in the combined shock scenario, public debt rises to just 76% of GDP, just barely above the indicative 70% threshold cited in the IMF’s latest DSA. And with external debt making up just a third of Pakistan’s public debt stock (of which multilateral debt, which would likely be excluded from any restructuring, makes up c45%), external debt haircuts achieve little on their own.

A 10% nominal haircut on Pakistan’s private and bilateral external debt stock would reduce public debt by just 1.5% of GDP. If applied equally to domestic debt, this would yield a reduction of 6% of GDP, which would be sufficient to bring the public debt stock to its 70% threshold. That said, with sovereign exposure totalling 50% of Pakistan’s banking sector assets and 8x of banks’ equity, a domestic restructuring would likely cause significant financial sector distress.

For these reasons, we do not see nominal haircuts as a likely component of Pakistan’s restructuring toolkit if it is forced to default, and estimate a maximum nominal haircut of 10% in a more onerous restructuring. However, given significant breaches to Pakistan external debt service indicators, we think cashflow relief would form the backbone of any potential restructuring. A 5yr maturity extension and grace period on interest payments would be required, per our DSA forecasts, to bring external debt service in line with the relevant thresholds relative to exports and revenue, but this would of course imply PV haircuts (unless it can be done in a PV neutral way).

Alternatively, we can look at Pakistan’s external debt servicing through the BOP lens. The IMF published a detailed table of external financing requirements and sources in Table 10 of its latest Article IV, but rising commodity prices in the intervening months have made its estimates out of date. With a current account balance of US$15.9bn (c5% of GDP) on a 12m trailing basis through April 2022 and public external principal payments of US$18.8bn due over the next 12 months, Pakistan’s gross external financing requirements total a whopping cUS$35bn (c10% of GDP). This rises to cUS$41bn (c12% of GDP) when IMF repayments and private sector amortizations in FY22/23 are included. 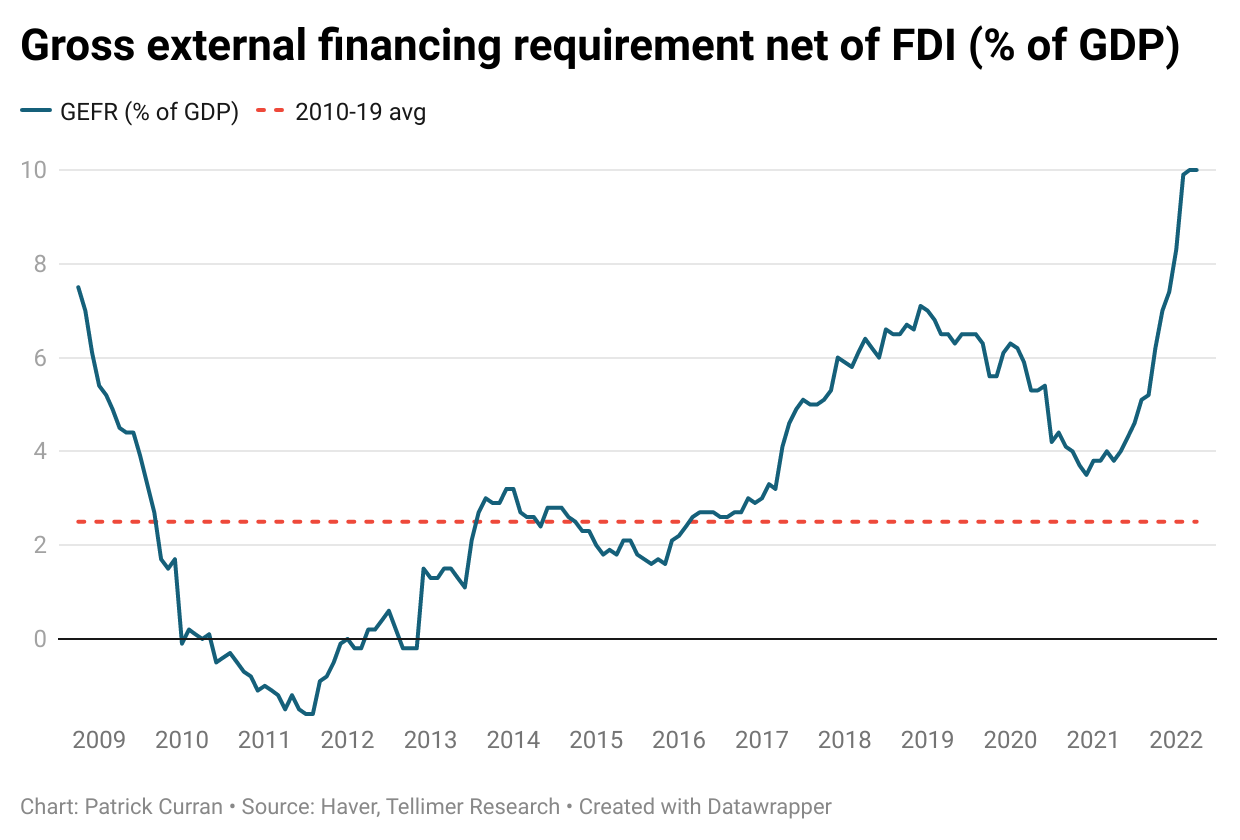 When stripping out FDI, which totalled a tepid 0.5% of GDP in the 12 months through April, Pakistan’s gross external financing requirement (GEFR) was 10% of GDP on a trailing 12m basis. This compares to a 2.5% of GDP average from 2010-19. The balance must be funded via portfolio inflows and external borrowing to have a neutral impact on reserves. With net portfolio and other investment inflows peaking at c4.5-5.5% of GDP during the early-2019 and early-2022 BOP blowouts, we assume that GEFR net of FDI must be at least halved from the current 10% of GDP level and projected FY22/23-FY25/26 average of 10.5-12.5% for Pakistan to be able to fund its BOP deficit in the years ahead. 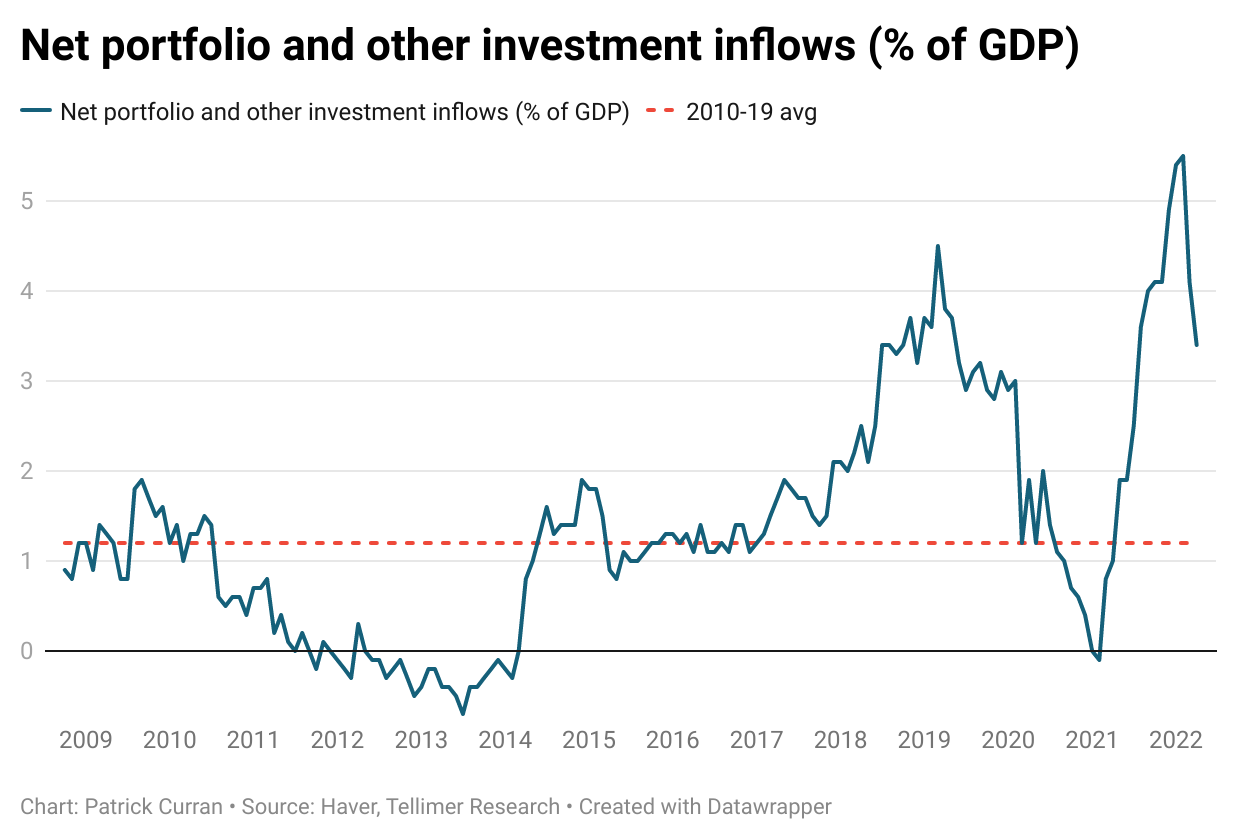 As such, in the absence of large portfolio inflows (which is extremely unlikely) and/or a continuation of abnormally large inflows from external borrowing (which is contingent on resumption of the IMF programme), Pakistan would require cashflow relief to bridge the gap. A 5yr maturity extension would generate US$18.5bn (6% of GDP) of cashflow relief on average from FY22/23 to FY25/26 and a 5yr grace period on interest would generate another US$2.8bn (0.9% of GDP) of relief on average over that period, assuming multilateral debt service makes up 25% of the total. This would leave the average external financing needs at a more manageable 5.6% of GDP assuming a CAD of 5% of GDP, or 3.6% of GDP assuming a CAD of 3% over the period.

At a 12% exit yield, we find a recovery value of US$70.8 in our bull case, US$59.2 in our base case, and US$53.2 in our bear case (see sensitivity table for the value of bonds with different exit yield and nominal haircut assumptions, holding the 5yr maturity extension and grace period constant). 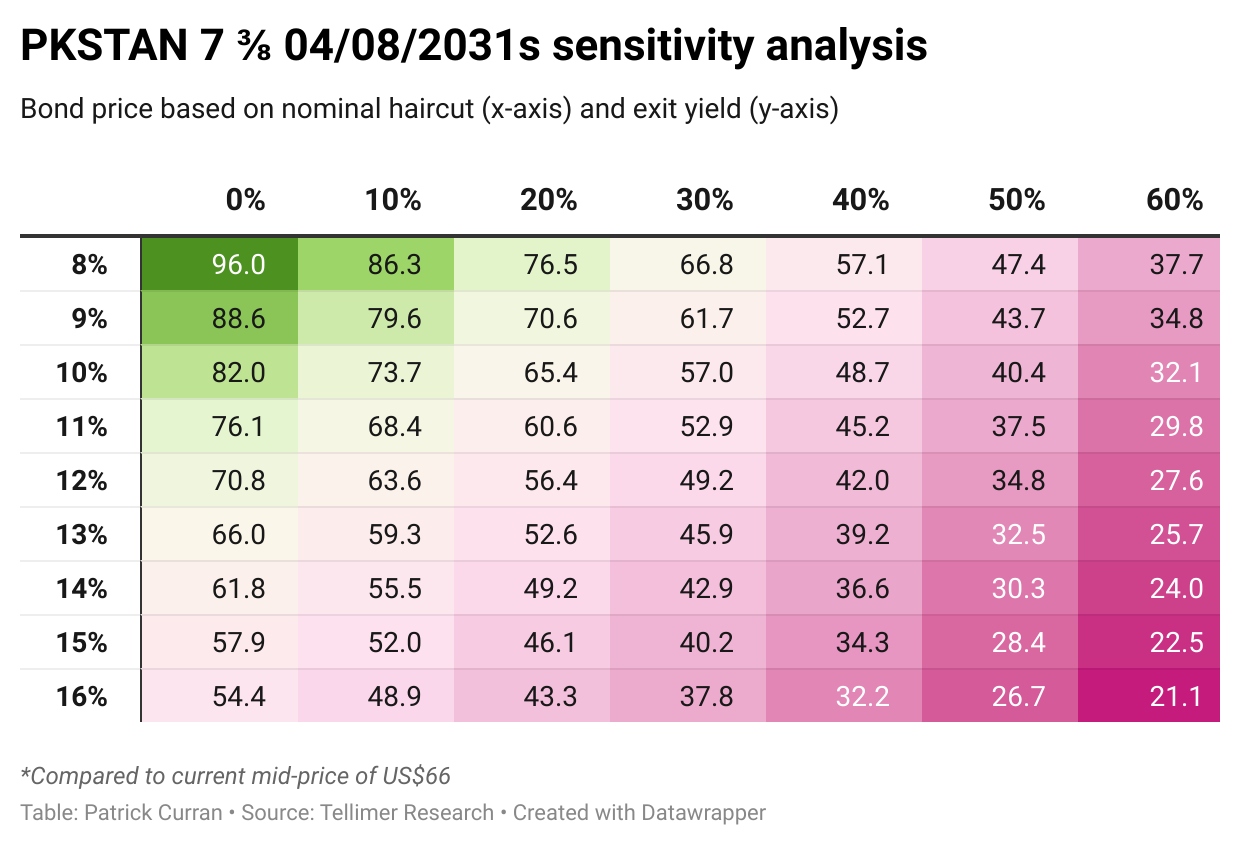 We then formulate an upside scenario of no restructuring and yields contracting to 10% (roughly a 700bps spread, in line with where the PKSTAN 7 ⅜ 04/08/2031s were trading before the February selloff), which yields a price of US$84.8. Assigning a conservative 50% probability of default and equally weighting the three restructuring scenarios yields a probability-weighted valuation of cUS$73, yielding c7pts (c10.5%) of upside relative to the current price of US$66.

Our recovery analysis affirms our earlier sentiment that bonds were likely trading roughly in line with recovery value last week, which we estimate at US$53-71 with a midpoint of cUS$60, and are now trading slightly above it after the recent rally. As such, we affirm our Buy recommendation on the PKSTAN 7 ⅜ 04/08/2031s at a mid-price of US$66 (14.2% YTM) as of cob on 1 June on Bloomberg with a target price of US$73.