Pakistan: Cricket is a symbol of much improved security

There are a number of reasons why we are positive on Pakistan – one of them is the dramatically improved security situation, symbolised by the return to the country of test-match cricket today, after a decade of exile. Since terrorists attacked the Sri Lanka cricket team’s bus in Lahore in 2009, international teams have refused to travel to the country and Pakistan have played most of their ‘home’ games in the UAE.

Investors who remain focused on the era of chronic law and order disruption (2007-14) will still consider Pakistani cities riskier places to travel to, as a foreigner, than Cairo, Dhaka, Manila, Nairobi or Tunis (cities where more attacks have explicitly targeted foreigners in recent years than their Pakistani equivalent, Karachi). However, there has been a sharp improvement since that period, illustrated by the following chart on deaths attributable to terrorism, as well as positive reports this year from the Pakistan Institute for Conflict and Security Studies (citing a c45% reduction in militant attacks yoy in 2018) and the UK Home Office. 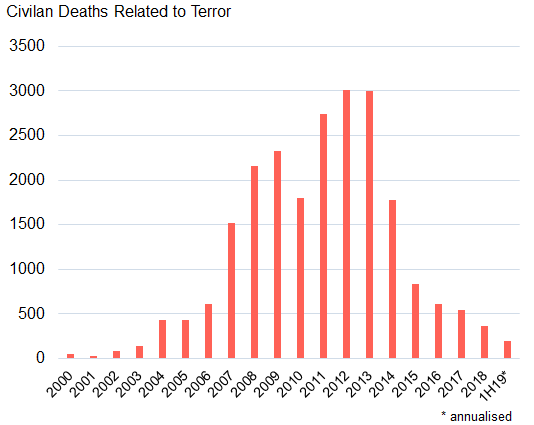 Moreover, in our view, Pakistan remains the most compelling structural reform story (in economics, domestic politics and geopolitics) in our global coverage of small emerging and frontier markets. Despite a 30% rally since the mid-August trough in the local KSE100 equity index (which had its best month since May 2013 in November), trailing price/book is still merely 1.2x, a 32% discount to the five-year median, and the real effective exchange rate of 95 is at a 15% discount to the five-year median.

FX reserves are still low (below four months of import cover) but are rising with disbursements under the IMF program and with foreign debt portfolio capital inflow to the local currency government bond market.

In addition, refreshed relations with China on CPEC and the likely renewal of the Army chief’s three-year term are additional reasons to be optimistic.

Of course, as with every country in our coverage, there are risks, short term and structural, such as low FX reserves (as noted), decelerating growth, high debt, low exports, high military expenditure relative to the economy’s size, poor education and health levels, and water supply vulnerability. These risks should be taken seriously but the more appropriate time for this is when Pakistan has returned to at least its average valuation of the past five years – it is still a long way off that.