26 May 2022
Published by
Tellimer Research

A political rubicon has been crossed in Pakistan on 25 May with the PLMN-PPP (Sharif-Zardari) government's use of preemptive arrests and laws banning mass gatherings, uniformed and plainclothes police, road and internet blocks, and tear gas shells against the multi-city protests, calling for an early general election, where protestors include women and children. Protests are ongoing at the time of writing.

A macroeconomic abyss is also coming ever closer with this week's negotiations between the government and the IMF concluding on 25 May without reaching an agreement. Despite, in the IMF words, "considerable progress", the sticking point remains the fuel and energy subsidies. Those were introduced by the former PTI-led government in February 2022 but the new PMLN-PPP government has so far refused to cut them.

No party disagrees with the need for the IMF, but no one wishes to bear the political cost of cutting subsidies.

For investors, it may well be the case that the economically most damaging scenario, an extended opposition sit-in that paralyses the economic policy of an already slow-moving government, plays out. But this may already be reflected in a Eurobond valuation that is near recovery value and equities that are cheaper, relative to historic average, than almost any other in emerging and frontier.

Three scenarios from this point

Politics, and by implication, economic policy, might progress along three scenarios, with our judgement of the probability attached to each.

Three actors in this drama

The motivation of the PTI is to apply pressure for an election. They feel their narrative, that of a parliamentary and judicial coup engineered by a corrupt domestic political cabal and endorsed externally by the US, has been embraced by the electorate, as evidenced by rallies on a scale and geographic spread without recent precedent.

The veracity of that sensational narrative is, of course, open to debate (and, under other circumstances, their main vulnerability might have been their operational competence when in power). But what is beyond doubt is the scale of the PTI's mass support. This demonstrably cuts across a sufficient cross section of the geographically dispersed populous areas with large parliamentary seat counts, ie the provinces of Punjab and Khyber Pakhtunkhwa, and the metropolis of Karachi, as well as across social divides of urban and rural, educated and uneducated, rich and poor.

The expediency of the PTI leadership is also clear in a recent softening of their rhetoric on the military establishment compared to the thinly veiled references and criticisms during their last days in power. For all his charismatic, uncompromising, idealist, and populist rhetoric, Khan is a politician.

The motivation of the PMLN-PPP is partly to preserve their immunity from prosecution under numerous ongoing anti-corruption investigations and legal cases.

But the unwillingness to remove the populist fuel and energy subsidies introduced by the PTI, the efforts, albeit futile, to secure bilateral financial assistance from, at least, Saudi and the UAE, and the policy to slow down the introduction of electronic voting machines and voting by overseas Pakistanis (changes which would likely favour the PTI), suggest that the PMLN-PPP have ambitions beyond self-preservation.

These are the actions of politicians who want to run government, not merely evade prosecution. However, this violent crackdown likely makes realising those ambitions even harder.

The military-intelligence deep-state has thus far, at the time of writing, remained silent.

Two of the sub-plots around the fall of the PTI government:

From the outside it is not clear whether Bajwa still wants a third term, whether the deep state is united, and what their red line is for intervention, and what is the nature of that intervention, eg a mix of a private and public arbiter, as played by former army chief Raheel Sharif during the 2014 PTI protests against the then PMLN government, or something more overtly interventionist in the manner of martial law eras?

Martial law still seems a remote possibility: while the political and economic risks are acute, the military-intelligence deep state has worked out, from multiple historic experiences, that martial law is counter-productive: the army loses popularity (and that was in an era which pre-dates social media's ubiquitous flow of real and fake news and views), promotion within the senior cadre of officers is throttled, and international economic and diplomatic engagement is made much more difficult.

Heading towards a crisis

Given Pakistan’s limited reserve buffers (under two months import cover) and large external financing needs, resumption of its IMF programme is necessary to avoid a balance of payments crisis. This week's IMF statement makes it clear that removal of fuel subsidies is a necessary precondition for programme resumption, which may be a difficult proposition for the new government given the difficult political backdrop.

This week’s 150bps rate hike (up to 13.75% compared to the last inflation reading of 13.45%) and recent rupee weakness (down 12% ytd) will reduce imports and buy the government some time to avert a BOP crisis, but ultimately fiscal consolidation is required to prevent the economy from overheating and resumption of the IMF programme is necessary to unlock the funds needed to plug Pakistan’s external financing gap.

Eurobond and Equity values may already reflect this crisis

With yields on Pakistan’s 2031 Eurobond near 15% and prices in the low- to mid-60s, the risks are now largely priced in.

Default risk stems primarily from liquidity rather than solvency issues, with public debt below 75% of GDP. This means that recovery values could be near or above current prices, with any potential restructuring likely to focus on cashflow relief rather than large nominal haircuts.

Equities – Cheapest in EM and FM

Pakistan equities are already about the cheapest in all emerging and frontier markets, when judged by trailing PB and PE multiple discounts relative to 5-year median.

There are currently no capital controls or FX repatriation restrictions facing foreign institutional investors that we are aware of. 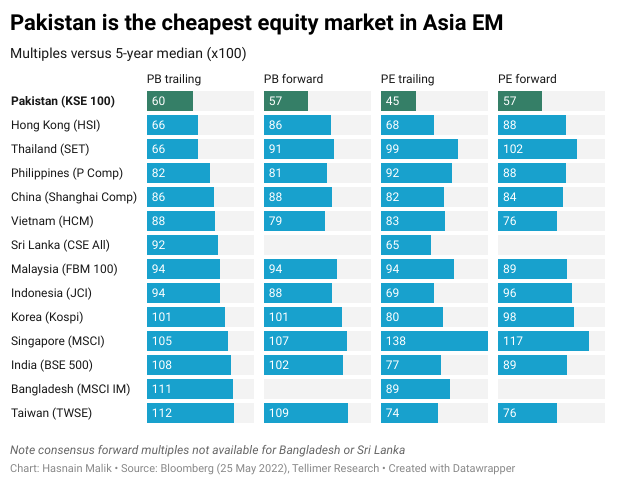