We hosted a call last week with the State Bank of Pakistan (SBP). This note outlines key takeaways. We would like to thank the SBP team for their insights during the call and preparation of this note.

As we have highlighted before, stabilisation was going well under the IMF programme pre-Covid. After having been blown off track by the Covid crisis, the programme has been recalibrated and resumed again in February, unlocking a US$500mn tranche of funding (plus another US$4.1bn by September 2022) and laying the ground for a US$2.5bn eurobond issuance at the end of March (with yields coming in below or at the bottom-end of the range of initial guidance).

Now that the initial crisis has passed (with the real GDP falling 0.4% in 2020, the first contraction in almost 60 years), the policy focus has shifted from stabilisation to normalisation as time-bound policy measures fade away and Pakistan gets back on the path of fiscal and external consolidation. Furthermore, high-frequency indicators on sales, manufacturing and business confidence suggest activity is already starting to pick back up.

Inflation, too, is starting to increase, but the SBP attributes the changes largely to administrative prices (with electricity tariff hikes) and food (with difficulties in wheat and sugar supply management pushing up prices). However, demand pressures are limited, the output gap is likely to stay negative through next year, and there is no evidence of wage pressures. Against this backdrop (barring unforeseen shocks) the SBP deems its policy stance to be appropriate, but expressed a desire to transition gradually to a positive real rate as demand pressures start to rise.

The SBP moved to a flexible exchange rate regime in June 2019, and attributes recent strength to improved balance of payments dynamics. Interventions are now limited to smoothing disorderly movements, and the SBP maintains that the exchange rate will continue to serve as the first line of defence if external pressures rise.

The SBP has undergone key reforms as part of the IMF program, including the passage by the cabinet of the SBP Act and elimination of SBP financing of the budget. The government has refrained from borrowing from the SBP since June 2019, and outstanding borrowings need to be repaid as they mature. The SBP also maintains that the banking sector is well-capitalized and on a strong footing, with NPLs contained.

On the external front, reserves have risen from US$7bn at the onset of the IMF program in June 2019 to US$13.5bn currently (not accounting for the US$2.5bn eurobond proceeds). The forward book has declined from US$8bn to US$4.5bn over the same period, meaning reserves have actually increased by US$9.5bn. The SBP plans to continue building reserves and reducing forward liabilities as market conditions allow. On that account, the Roshan Digital Account initiative to help overseas Pakistanis invest in the country is also bearing fruit. 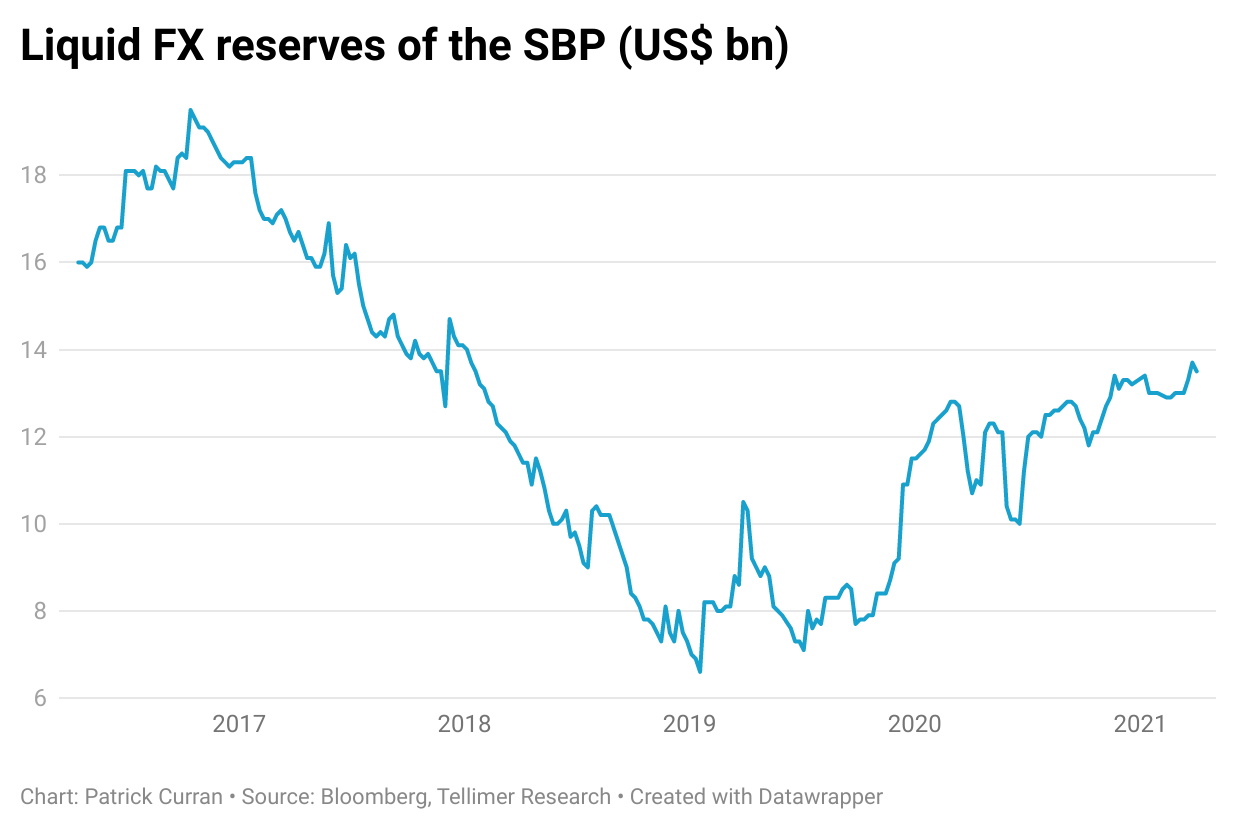 Pakistan’s current account improved from a US$2.7bn deficit to a US$900m surplus over the first 8 months of the fiscal year (through February). Looking at the slightly more timely trade and remittance data (which runs through March), the improvement has been driven by a US$600m widening of the trade deficit (based on a 14%yoy rise in imports and 7% rise in exports) which was more than offset by a US$4.5bn (26%yoy) rise in remittances (largely due to (i) increased use of formal channels, (ii) the flexible exchange rate regime, (iii) altruism owing to the economic shock and (iv) incentives by the Government and SBP). The SBP thinks the turn towards formal channels will persist and that high remittances will be sticky.

That said, we expressed our concern about the widening trade deficit, with imports up by 30% and exports up by 11% over the first three months of the year. The SBP attributed the rise in imports to one-off increases from machinery imports under the concessional TERF financing facility, higher sugar and cotton imports due to weak harvest this year, and higher prices on key imports like cooking oil. Import growth should collapse to a projected 3% after one-offs fade, according to the SBP. 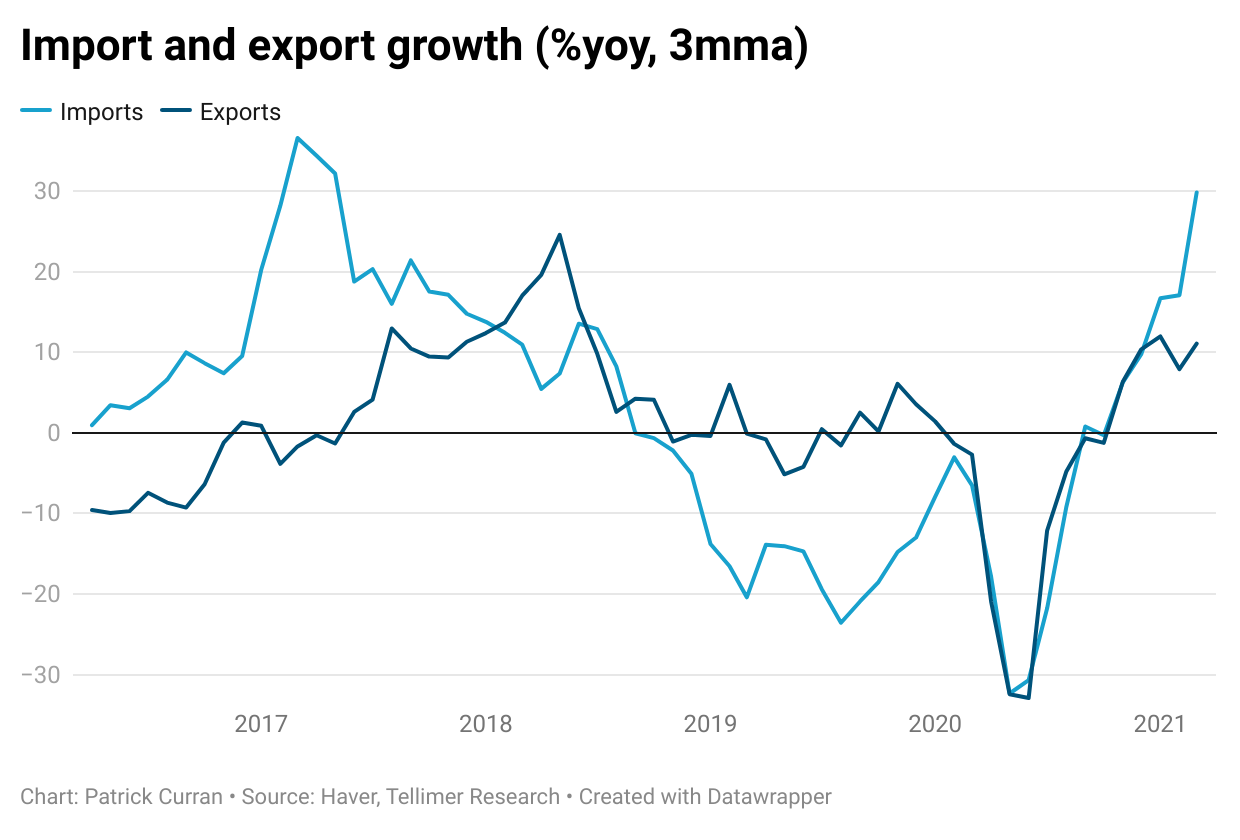 In any case, the SBP believes that the current account will shift to a manageable 0.5-1.5% of GDP deficit this year (consistent with IMF forecasts), far below pre-IMF levels of 4-6% of GDP. Financing a deficit of this magnitude should not be an issue, with significant bilateral and multilateral inflows supporting the government’s targets 80/20 concessional/non-concessional financing ratio and a sukuk issuance likely at some point before September.

The SBP acknowledges the amount of heavy lifting that needs to be done on structural reforms, including SOE reforms and privatisation, electricity sector reform and amendments to the NEPRA Act, and progress on AML/CFT reforms. The SBP remains confident that the government, after gaining more seats in the recent Senate elections, will be able to continue on its reform path.

In the shorter term, Pakistan must continue to consolidate its budget to reduce its large debt burden and rebuild external buffers. But over the longer term, the structural reforms will be the key driver of Pakistan’s economic story. Under the IMF programme, we are increasingly confident that Pakistan’s shorter-term reform objectives can be met, but it remains unclear if it can adhere to its ambitious structural reform agenda after the programme is complete.

Slippage on any of its structural reform targets, especially SOE reform (including elimination of circular debt in the power sector, passage of the NEPRA Act, maintenance of cost-reflective tariffs, and potential privatisation), could cause imbalances to build back up and derail Pakistan’s longer-term growth outlook. There is ample low hanging fruit when it comes to reforms (with an incredibly limited tax base, lots of bureaucratic constraints to business, and a lack of integration into global value chains), and policymakers must seize the initiative to set Pakistan on a sustainable long-term growth path.

We were encouraged by what we heard in our meeting with the SBP, which continues to show a strong commitment to reforms and rebuilding external buffers. Our discussions with IMF officials also reflected a sense of optimism that key reforms under the programme would get done, while acknowledging that some of the targets (like, we think, the projected revenue increases) are ambitious and will require some heavy lifting from policymakers (with a history of perennially falling short on key structural reforms under IMF programmes, especially regarding the electricity sector).

Against this backdrop, we continue to believe that Pakistan offers one of the more compelling reform stories in emerging markets, but from a much more vulnerable starting point than most. This is reflected in recent price action, with Pakistan outperforming the EMBI index by 6.5% on a total return basis since the beginning of the year. We think this outperformance is justified, and maintain our Hold recommendation on Pakistani eurobonds (after having flagged them as a 2021 trade to watch). 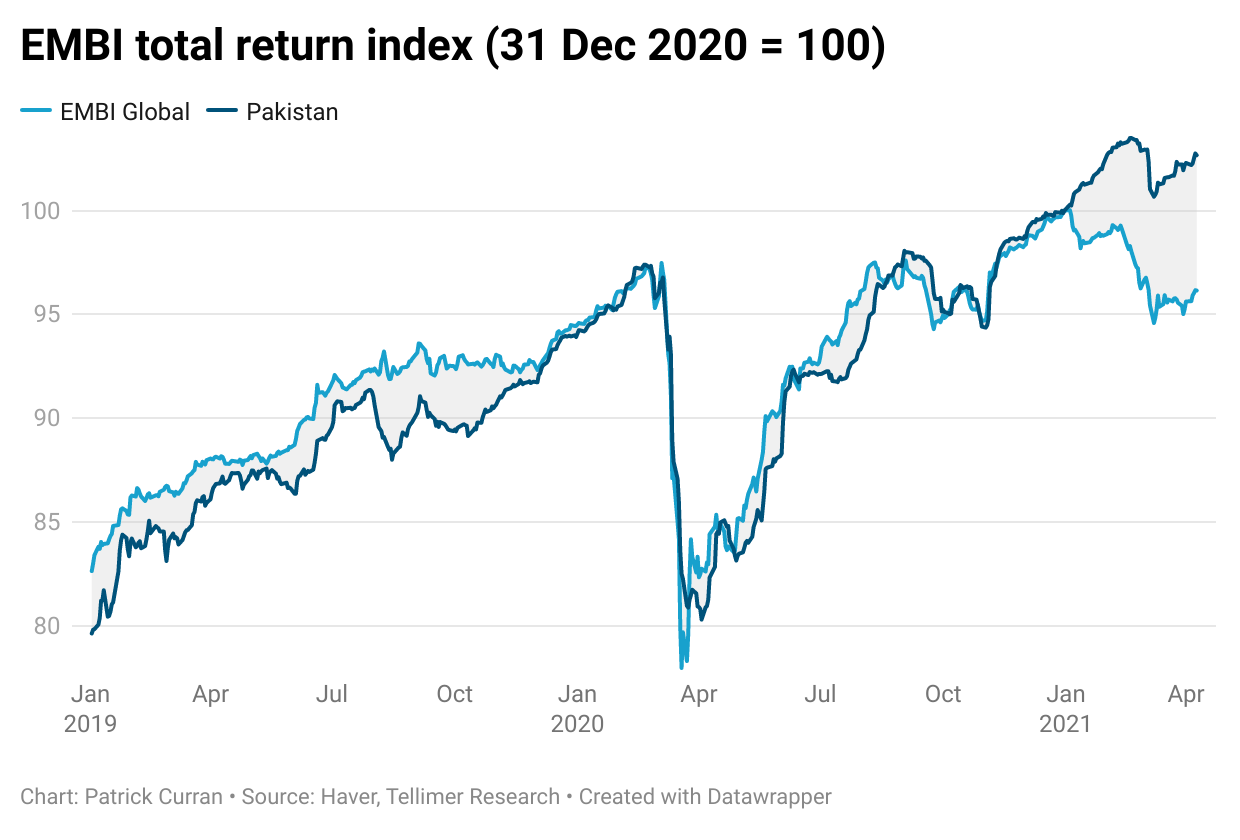 That said, we would be remiss not to acknowledge the uncertainty stemming from leadership changes at the finance ministry, with fresh headlines today that Prime Minister Imran Khan may be planning to name a new finance minister as early as this week after a committee supervised by incumbent Hammad Azhar decided to resume sugar and cotton trade with India (which was reversed by Cabinet the next day). Shaukat Tarin, a former finance minister and banker, is reportedly favoured to replace Azhar, who himself was appointed just last month after his predecessor Abdul Hafeez Shaikh lost an election for a Senate seat.

Another appointment would mark the fourth finance minister since PM Khan assumed office in August 2018, and could trigger doubts over policy continuity in a key ministry charged with implementing IMF reforms. While policymakers and IMF officials alike have expressed their confidence that high-level commitment to the IMF programme remains, the uncertainty created by frequent leadership shuffles could undermine investor confidence in the reform process and erode some of the recent outperformance. However, we think that the evidence throughout the IMF programme points to ongoing commitment from PM Khan, and, just as importantly, the military that sits behind him. While we would be more concerned about an unplanned change at the head of the SBP, we think any market jitters resulting from changes at the finance ministry could therefore be viewed as a buying opportunity.

India, China, Pakistan détente but we’ve been here before so low expectations, 23 March

Pakistan: Time to get back on track, 10 December