Pakistan has been a notable outperformer this year, with eurobonds outperforming the broader EMBI index by 5.6% in total return terms since the beginning of the year. We think this outperformance has been justified by the resumption of its IMF programme (with the second through fifth reviews approved in April, after the programme fell off track post-Covid), helping to crystalise its reform agenda and lend credibility to its plans for fiscal consolidation. 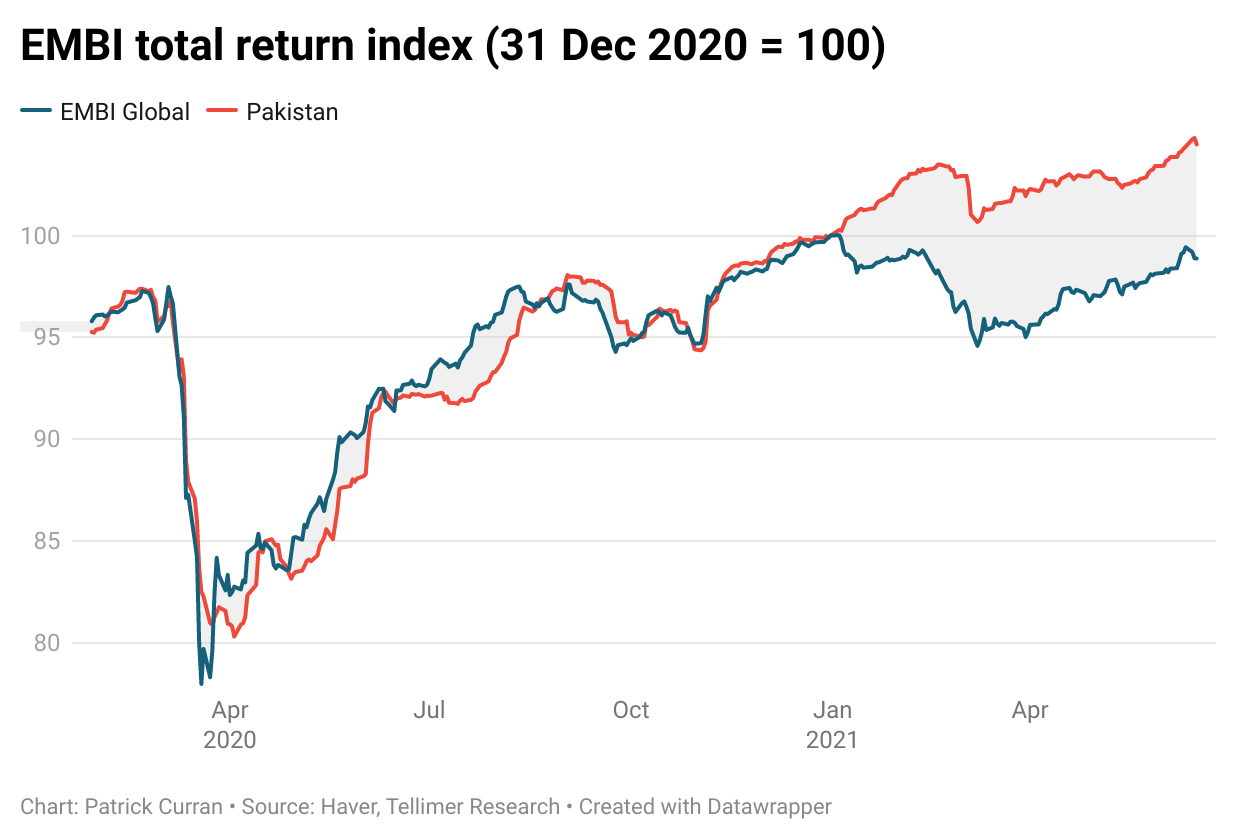 However, with the external balance largely restored in recent months and debt on a downward trajectory, the government’s main priority has shifted from stabilisation to growth. Among many policymakers, the sentiment is that macro stability is meaningless if it cannot be used to promote sustained and inclusive growth, with Finance Minister Shaukat Tarin (who was appointed just two months ago) expressing an interest in renegotiating some terms of the IMF programme that he deems as being overly tough. 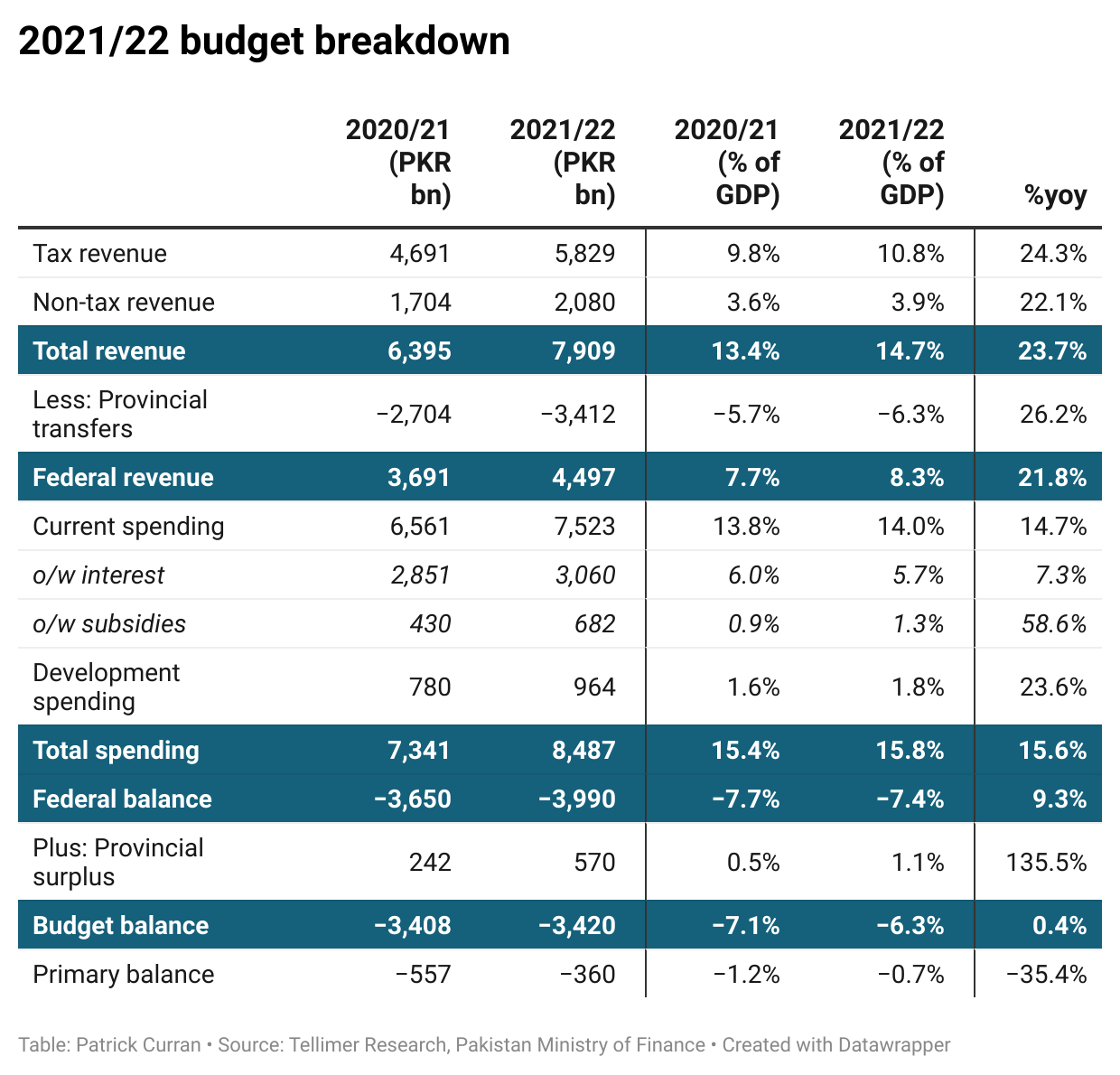 And while the capex increases seem extravagant, capex of just 1.8% of GDP is still minuscule and comprises just 11% of total spending (although, to be fair, a majority of capex takes place at the provincial level, taking total development spending to a more respectable 3.7% of GDP). This is reflective of limited fiscal space, with interest payments eating up 43% of gross revenue in 2020/21 (or 77% of federal revenue) and expected to fall only slightly to 39% and 68%, respectively, in 2021/22. 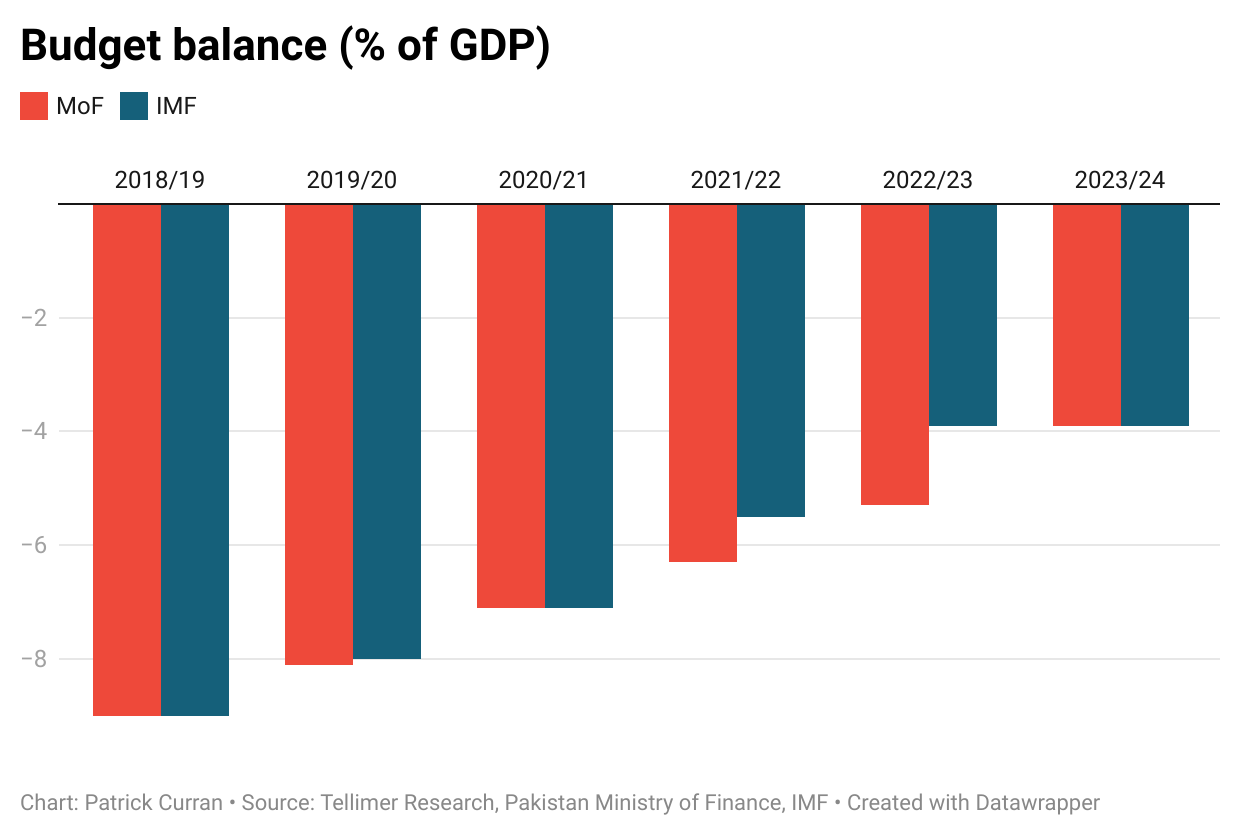 This represents slippage of 1.1% of GDP on average over the next two years relative to IMF targets, effectively delaying consolidation by a year. Nonetheless, public debt is still expected to drop to more or less the same level by 2023/24 as projected by the IMF, likely a result of the upside surprise to growth in 2020/21 and the government’s more optimistic growth projections moving forward. 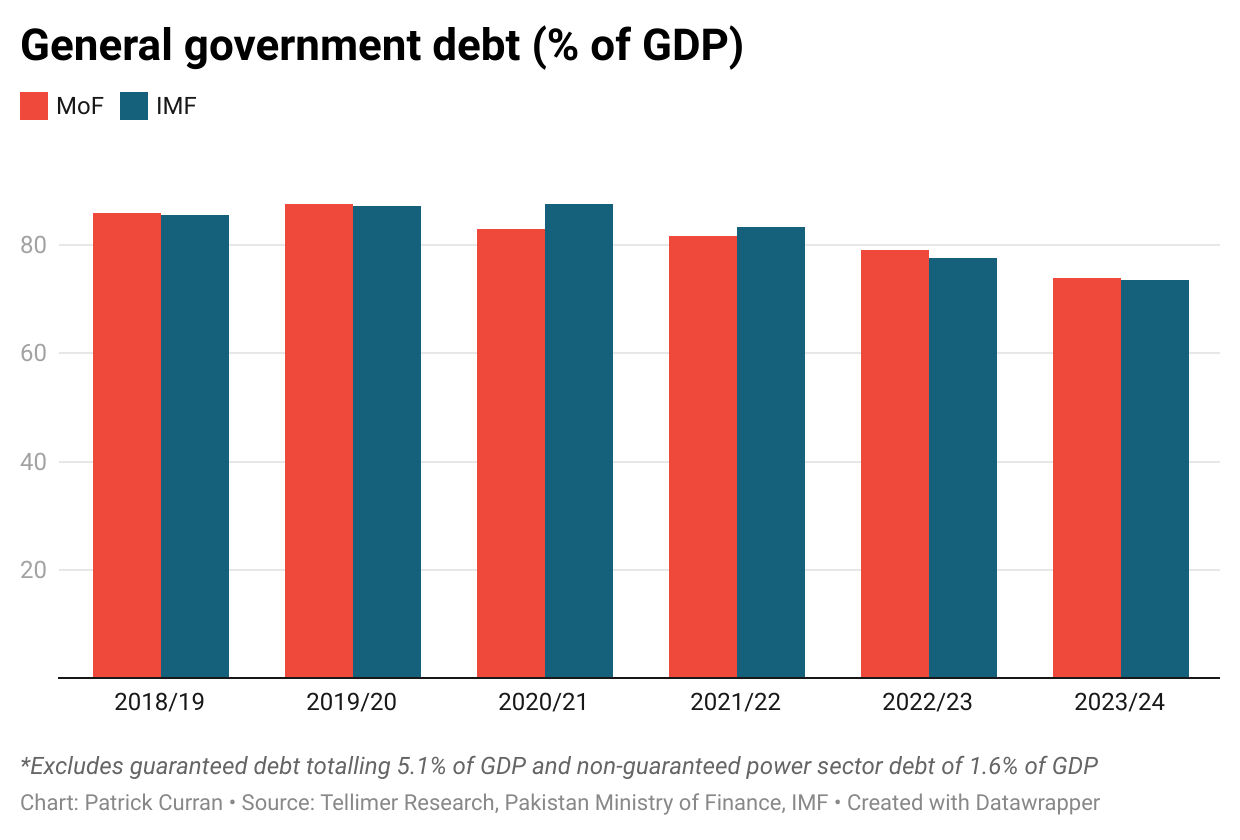 IMF programme hangs in the balance

Although the government has explicitly stated its desire to continue the IMF programme, the key question that stems from the budget is whether or not the IMF will accept the shift towards a more growth-friendly fiscal stance. Ultimately, the Fund’s primary concern will be whether debt falls in line with programme targets and, on that front, the budget at least superficially checks the box. However, built as it is on optimistic growth assumptions, the IMF may hold a different view of the trajectory of Pakistan’s debt stock and could consequently be dissatisfied with adjustments to budget targets.

The initial phased hikes were the key factor that pushed Pakistan’s IMF programme off track, and were a prior action for programme resumption in April. As such, the decision to forego further tariff increases threatens to derail the programme. Further, it will disrupt plans to reduce circular debt and arrears in the power industry, which the IMF estimates at 5.2% at the end of 2020 (including 2.2% of GDP of PHPL arrears and 1% of GDP of CPPA arrears that have been recognised as government guarantees, and 1.6% of GDP of CPPA arrears that have not).

The IMF estimates that each month of delay for an adjustment of PKR1/kWh results in additional arrears of PKR8.5bn. With PKR5.65/kWh of tariff hikes due to be implemented in six phases from April 2021 to June 2023, failure to hike electricity tariffs further could therefore result in an additional PKR576bn (1% of projected GDP) annually by 2022/23, increasing the circular debt stock and exacerbating Pakistan’s endemic issues in the power sector.

In Tarin’s first news conference last month since becoming financing minister in April, he telegraphed the decision by saying that the government was not ready to accept tariff hikes or corporate income tax increases, both of which were the key sticking points in IMF negotiations earlier this year, saying that “The IMF has a cookie cutter approach” but adding that “We have talked to [the IMF] and they are quite sympathetic.” Instead, he said that the government would propose alternative plans to increase revenue and reduce energy sector debt.

In a testimony before the Senate Standing Committee on Finance this Wednesday, Tarin further committed to the IMF programme, but in terms that aren’t likely to provide much encouragement to markets, saying “It is not possible to get out of the IMF programme at this time” and adding that “We were forced to go to the IMF…This time the IMF was not friendly with us and the programme was front-loaded and tough”.

The latter point is true, but not without reason. Pakistan’s current IMF programme is the 15th since 1980, averaging a new program every 2.5-3 years, making Pakistan one of (if not the) single most recurring programme participants. In recent years, the IMF’s reform objectives in Pakistan are largely unchanged, but failure to implement reforms has caused imbalances to build up over time, necessitating a front-loaded programme as Pakistan neared the breaking point. So far, external imbalances have been largely dealt with under the existing programme, but fiscal imbalances still need to be addressed.

Against this backdrop, it is unclear how the IMF will respond to Pakistan’s backtracking on subsidy and revenue reforms. In response to a question on Pakistan’s intention to renegotiate programme terms, IMF spokesman Gerry Rice gave the rather vague assurance in his 6 May press briefing that “We stand ready to support Pakistan” and “look forward to continued discussions with the Pakistan authorities, when the time comes for the sixth review,” which is due on 3 September and carries with it the promise of another US$800mn disbursement.

Finance Minister Tarin was recently cited by the FT as saying that Pakistan’s strategic importance to the US as American troops withdraw from Afghanistan has given it “some space” to delay IMF reforms and made it more receptive to Pakistan’s requests to hold off on power tariff and tax increases. If this holds any weight, then Pakistan may just get away with an about-face on some of its key IMF commitments. However, the IMF is unlikely to roll over without a fight, and further negotiations between now and the September review could result in some of the budget measures being watered down.

Political wrangling also threatens to delay the budget’s approval, with parliament’s lower house suspended on both Tuesday and Wednesday after clashes between the government and opposition lawmakers during the budget debate. Indeed, the back-pedalling on politically difficult reforms could be partially a response to the recent defection of a senior member of Prime Minister Khan’s ruling party, which we don’t think is a risk to the ruling PTI government but has undoubtedly turned up the heat on the PM.

Other reforms still broadly on track and external imbalances alleviated

Looking beyond the budget, other key reforms under the IMF programme remain largely intact, including zero borrowing from the State Bank of Pakistan for budget financing, exchange rate flexibility and implementation of all but one of the 27 required actions to remove Pakistan from the Financial Action Task Force (FATF) grey list (with the FATF set to present Pakistan’s case next week, potentially resulting in its removal from the list).

At the same time, external imbalances have greatly eased. Foreign reserves have risen from a trough of US$6.6bn at the beginning of 2019 to US$16.4bn as of 11 June, driven by consolidation of the current account (with a US$0.8bn (0.3% of GDP) surplus from July to April versus a US$4.7bn (2.1% of GDP) deficit at the same time last year) and US$3bn of debt issuance (including a US$2.5bn eurobond in March and US$500m green eurobond by the Pakistan Water and Power Development Authority (WAPDA) in May). 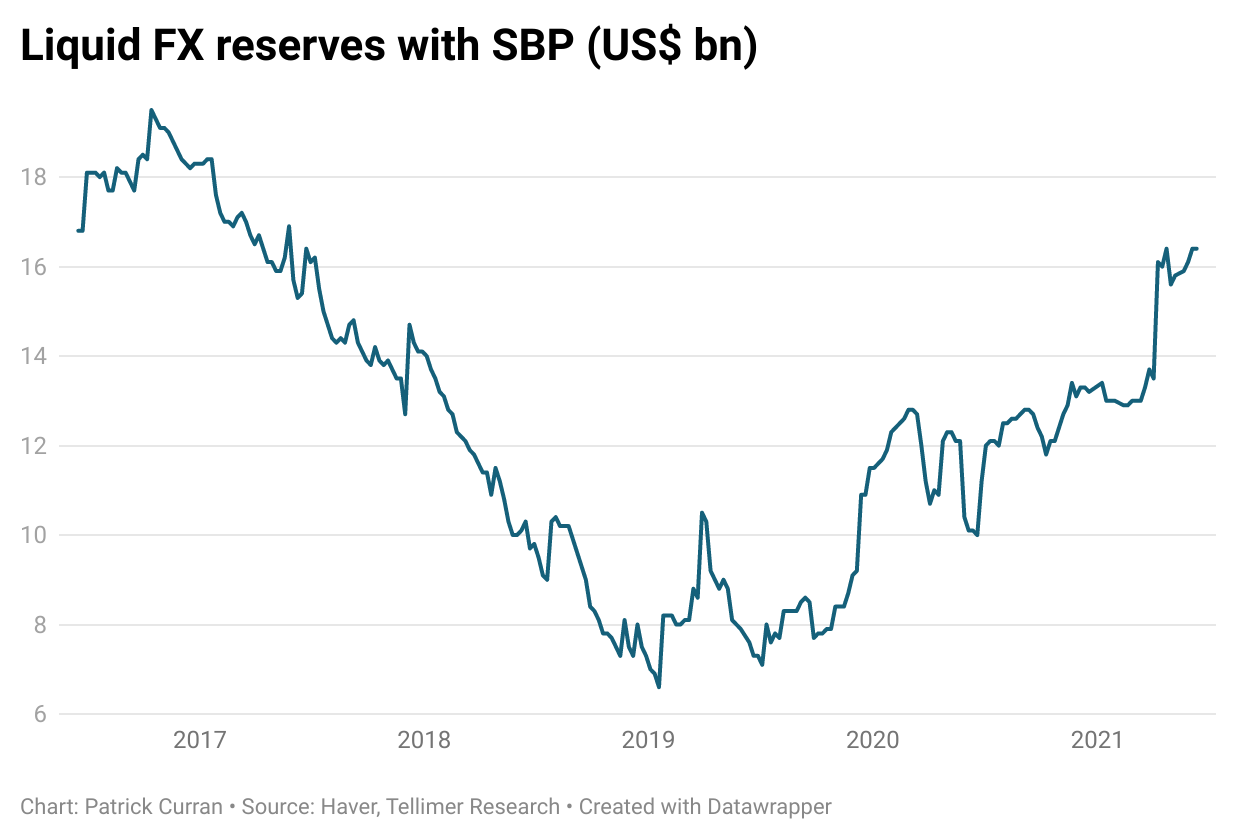 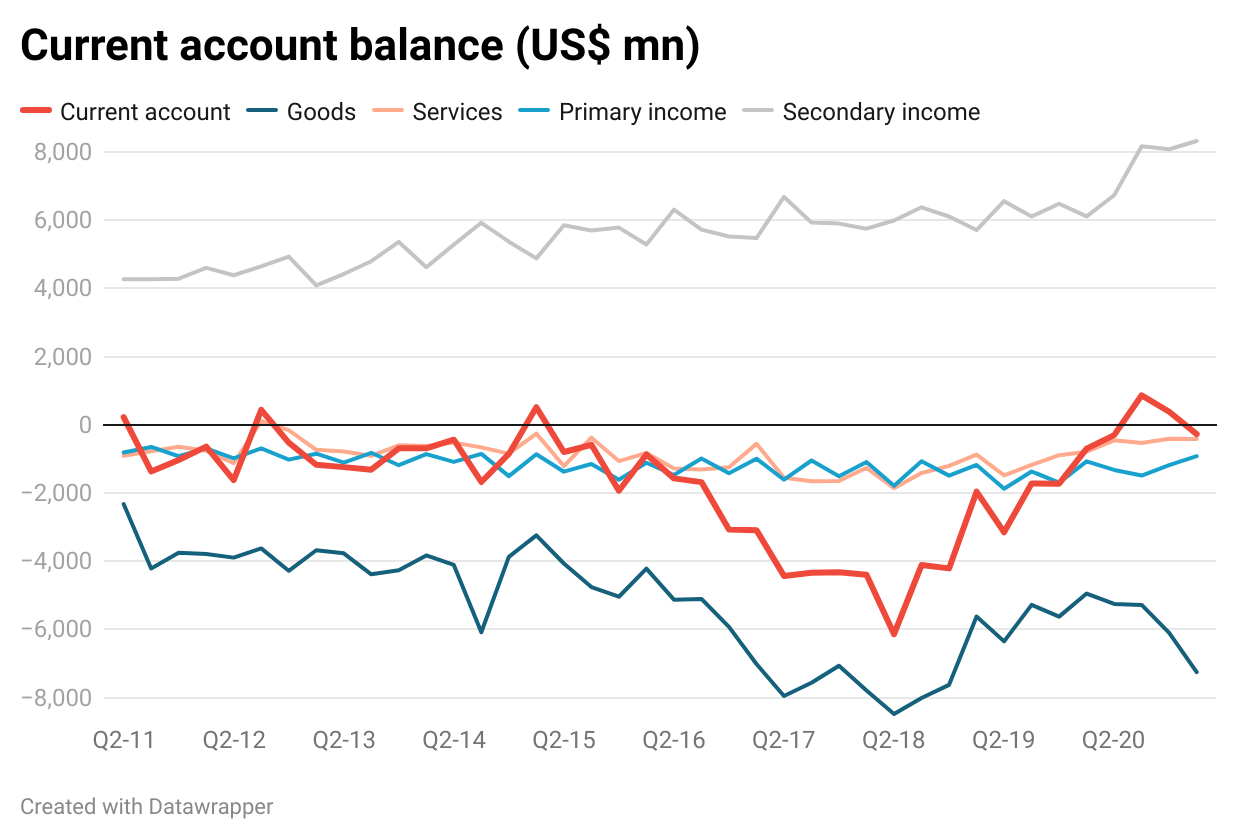 Remittances have been a key driver of the improvement, rising 17% yoy to a record US$26bn in 2020 and another 39% to US$12.5bn over the first five months of the year. The State Bank of Pakistan (SBP) thinks the rise will be sticky, driven in large part by a shift into formal transfer channels, with a recent survey showing that over two-thirds of migrants who remitted more last year intend to keep doing so in 2021 and, of those, 90% are likely to remain abroad rather than return to Pakistan. The current account was also supported by healthy flows through the new Roshan digital accounts, which have attracted over US$1bn since September despite only 5% of Pakistani expats currently participating. However, the IMF seems less certain that the rise will be sticky, and any reversal of strong post-Covid growth could pressure reserves. 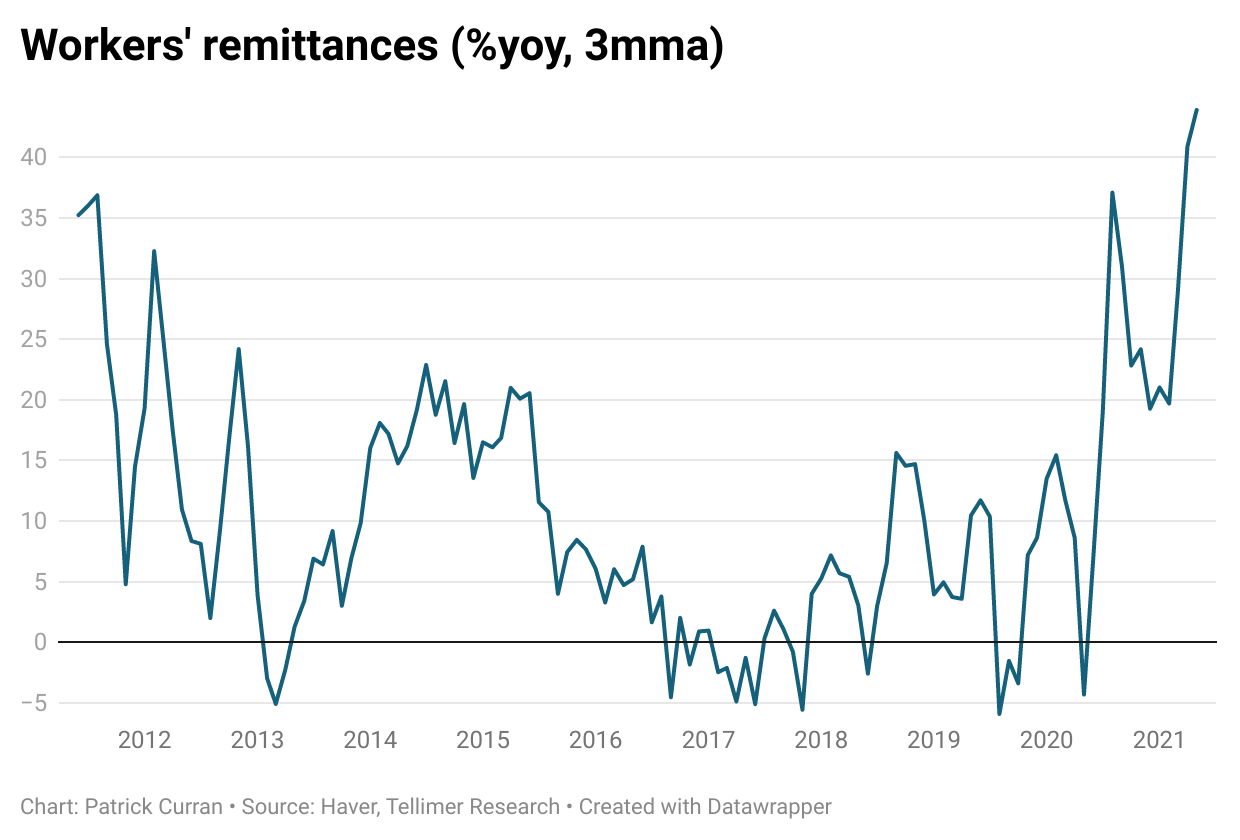 At the same time, Pakistan’s trade balance has deteriorated sharply this year, with imports rising 23% yoy over the first five months of the year versus a 3% rise in exports, widening the trade deficit by US$5.75bn relative to the same period last year. That said, the SBP claims that much of the deterioration has been driven by a one-off rise in wheat and sugar imports in response to domestic supply shortages (rising US$1.1bn over the first four months of the year) as well as a significant contribution from machinery imports (totalling US$3bn over the past eight months), which are likely to unwind in the case of wheat and sugar and promote growth in the case of machinery.

Overall, Pakistan’s current account deficit is likely to revert from a projected deficit of 1.5% of GDP in 2020/21 to 2.5-3% of GDP over the medium term, which is more in line with what the IMF deems to be its “norm” and is still a vast improvement from the c4-6% of GDP deficits Pakistan experienced from 2017-19. As such, even with some slight deterioration expected, Pakistan’s external imbalances seem to be largely addressed, for the time being, bolstered in large part by a renewed commitment to PKR flexibility (and further supported by the recent extension of DSSI relief through year-end by the G20, which could result in another US$3.7bn of debt relief in H2 2021).

Overall, we still think that Pakistan is one of the more positive reform stories in emerging and frontier markets. External imbalances have largely been alleviated, while fiscal consolidation has continued post-Covid, even if at a slower pace than initially anticipated. As such, the outperformance of Pakistan’s eurobonds, which have outperformed the EMBI by 5.6% in total return terms ytd, is justified.

However, the budget solidifies the shift in emphasis that has been underway in recent months from stabilisation to growth. Although debt is still projected to decline, there is still a lot of fiscal heavy lifting that needs to be done and, with interest payments still eating up over three-quarters of government revenue, the margin for error is very slim.

Further, there is still a long road to travel before Pakistan’s structural issues are resolved (especially in the power sector), and without an IMF backstop that road will be longer still. If Pakistan’s reform backtracking jeopardises its IMF programme, the positive reform outlook would be greatly diminished.

We are still structurally positive on Pakistan, but we think the upside is now largely priced in and retain our Hold recommendation on Pakistan’s eurobonds at an EMBI spread of 483bps at cob on 16 June.

The next IMF review in September will be a key milestone, and could push prices in either direction depending on whether the IMF gives its stamp of approval to Pakistan’s more pro-growth agenda or pulls the plug on its programme and associated financing.

Pakistan political storm in a teacup (again), May 2021 (Malik)