Pakistan budget – Too little, too late

On Tuesday, Pakistan’s PTI government presented the much anticipated, first full budget for FY 20 (which runs through June 2020). Revenue Minister Hammad Azhar wasted no time in laying blame on previous governments' mismanagement of economic and financial affairs, for which we maintain a high degree of sympathy. Unfortunately, we believe that the current budget proposal will do little to address the economic crisis facing the country. As we have said in our previous report, Pakistan faces serious structural challenges that will require a significant outlay of capital. However, until additional revenue generation can be achieved, it is unlikely that much will be resolved.

The current budget proposal shows a stark increase in both revenue and expenditure figures over the previous year; proposing a 25% increase in FBR tax revenue for a total of PKR5.55tn (cUS$37bn) as well as a 30% increase in federal expenditure, rising to PKR7.02tn (cUS$46.5bn).

Ultimately, we believe that there should be a significantly higher emphasis placed on overall fiscal consolidation over the 7.1% deficit that is currently being proposed. While this is a slight improvement over the 7.2% deficit in FY 19, it certainly will not be enough to stabilise the country’s debt trajectory. Moreover, we question the feasibility of achieving the proposed deficit, given the structural challenges faced by previous administrations regarding tax collection – especially as long as the proposed expenditure figures remain significantly easier to achieve. 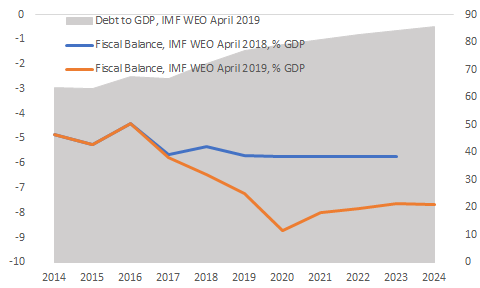 The government’s current “tax reform agenda” consists of simplifying the tax regime, phasing out exemptions and concessions, and increasing taxes on targeted goods and industries, while leaving general sales tax rate and corporate tax rate at 17% and 29%, respectively. Combined with the widespread opposition to the budget, these additional measures are insufficient to offset the abysmal rate of tax collection, filed by 1.9mn people in a country of 220mn.

At the same time, the planned increase in spending – driven by higher interest payments while defense spending is kept stagnant – is much more likely to come to fruition, which would leave Pakistan with a steeper deficit than expected. While expenditure cuts would not be prudent, given the popular climate, we believe the government cannot afford the planned increase.

The implications for growth are mixed, as slower growth in FY 20 has already been priced in, and the cost of stricter tax regime increases suggests a commitment to long-term economic stability. Despite the shortcomings of the revenue measures, the budget technically meets the IMF criteria, including a reduction in the primary deficit to 0.6% of GDP, likely moving forward the US$6bn bailout agreement in April and reach approval by the IMF’s Executive Board in coming weeks.

Overview of revenue and expenditure targets

Molly Shutt contributed to this research.