Pakistan's banks have seen a considerable improvement in loan quality over the past decade; non-performing loan (NPL) ratios are half of their 2011 levels and the cost of risk has remained manageable in recent years. However, macroeconomic challenges (both domestic and global) could trigger a fresh wave of delinquencies as various sectors, such as textiles, suffer. That said, banks’ cautious approach to lending over the past decade and their low loans/deposits ratios could provide a buffer.

In this report, we assess the loan quality of Pakistan's banks from various angles, including sectoral exposures, book value sensitivities and capital positions. We also estimate the levels of NPL levels that equity investors are already pricing in.

Overall, there are sharp differences between banks in terms of their exposure to a new NPL cycle, with Bank Al Habib being the most exposed within our sample, and United Bank the least.

Pakistan banks' asset quality has improved considerably in the past decade

The current NPL ratio of Pakistan's banking sector stands at 7.8%. This number may appear to be higher than that of other emerging markets, but this is largely because legacy NPLs are not written-off from banks’ books, which is not a standard practice globally.

Improvements in asset quality have been mainly driven by the banks’ cautious approach to lending; the advances/deposits ratio fell to 47% in 2021 from 54% in 2011 and 76% in 2008. And the concentration of high-quality corporate loans has increased considerably as banks have reined in their exposure to lower-quality names. 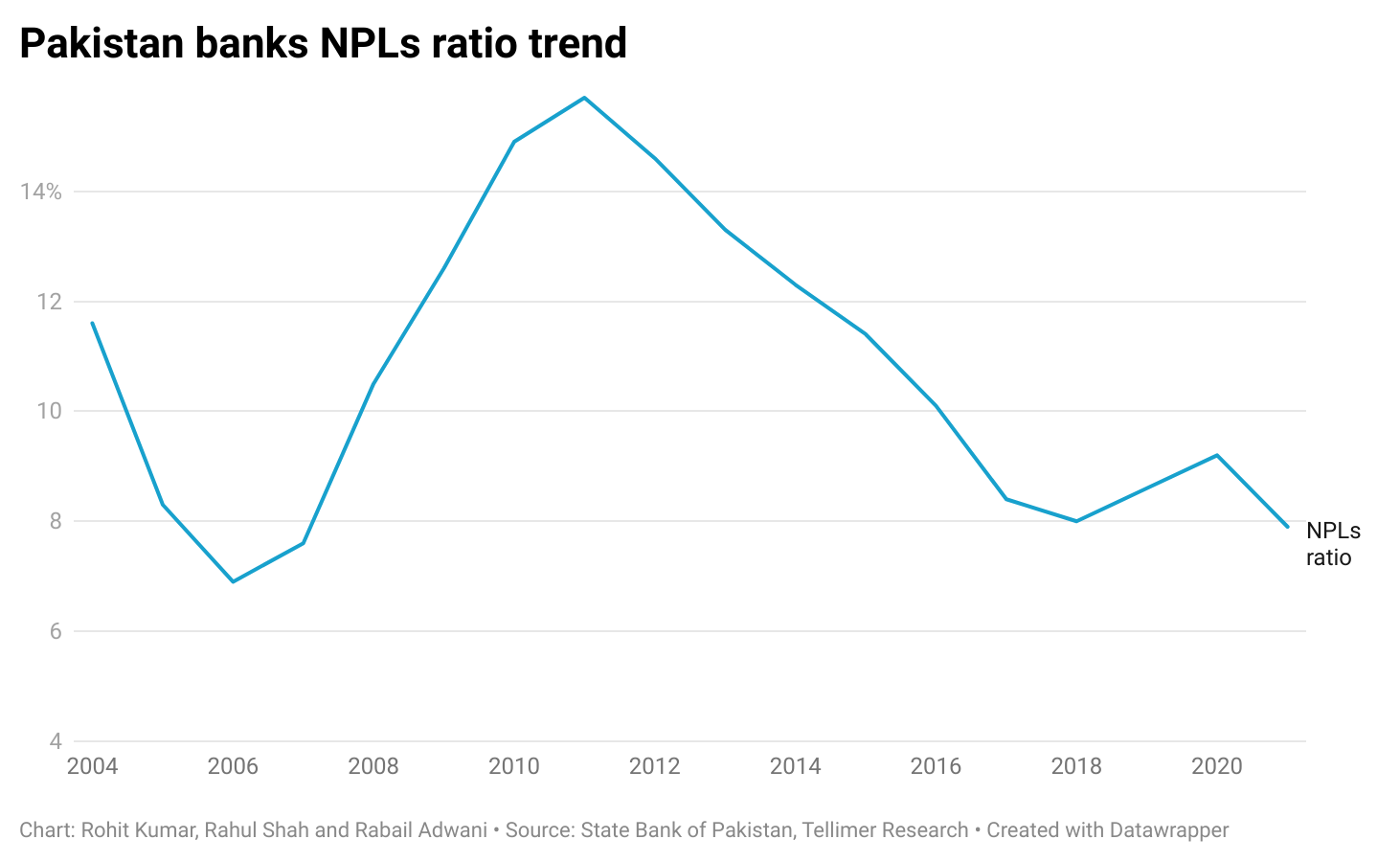 The textiles sector, which accounts for c18% of banking sector loans, could face challenges in the near term due to:

We have seen unconfirmed reports that textile companies are seeing their export orders slashed for the coming quarters and have also laid off employees. Note that the sector was one of the major drivers of the 2008-11 NPL cycle, with the sector’s NPL ratio peaking at c30% in 2011.

Below, we present the exposure of Pakistan's banks to various sectors, along with our qualitative assessment of the NPL risk for each sector. We estimate that c30% of the banks’ credit exposures are at high risk, with another 50% at medium risk of NPL formation.

By contrast, c20% can be considered low risk, either due to government guarantees or less sensitivity to macroeconomic challenges. In terms of individual banks, the loan mixes of BAHL and BAFL appear riskiest, while HBL's and UBL's look relatively safe. 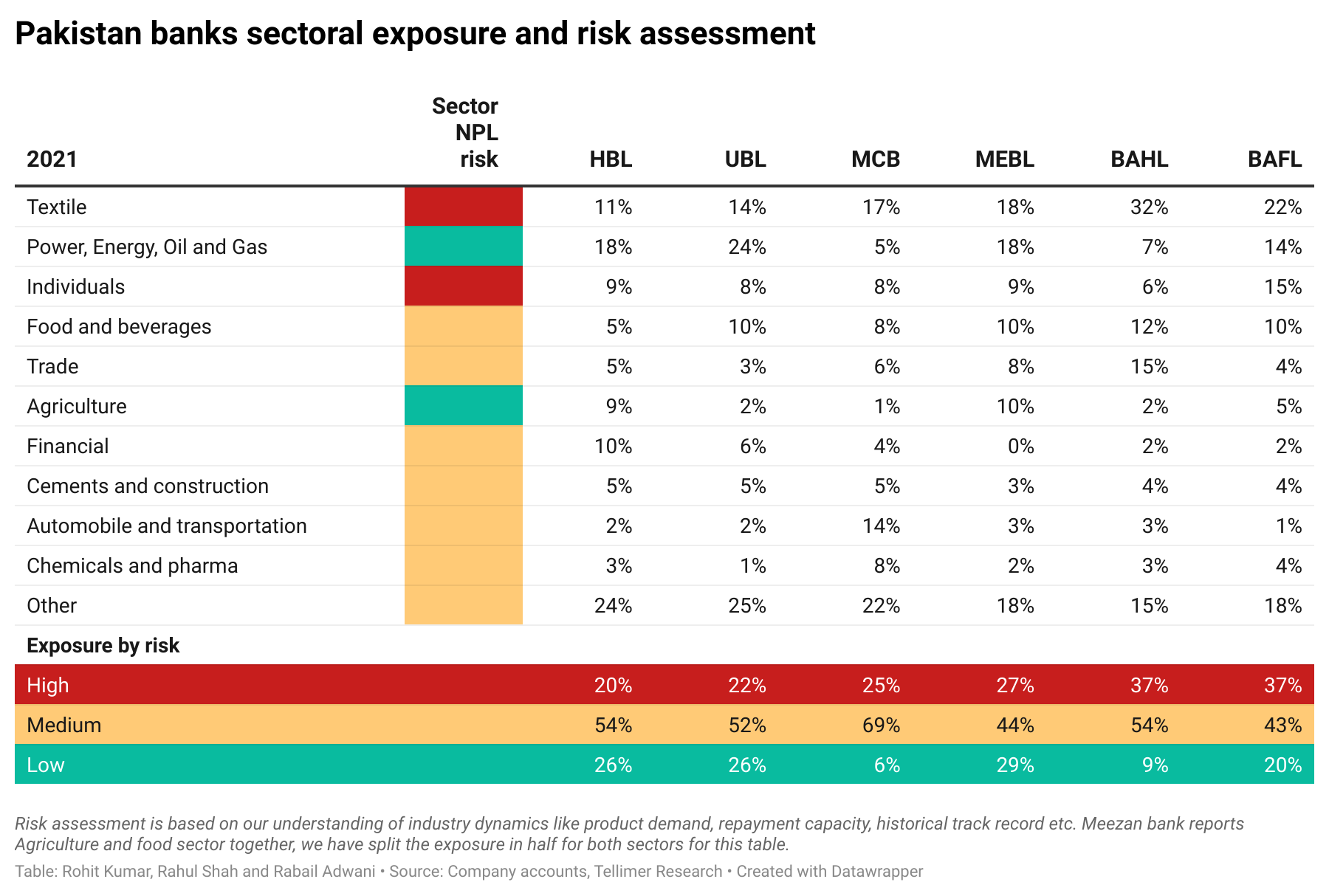 The cautious approach of domestic banks to lending in the past decade could provide some cushioning for them in the event of a new NPLs cycle. Banks with low loan/deposits ratios and those with low leverage could be less impacted than those that have lent aggressively.

We have conducted a sensitivity analysis on banks’ book values in the event of a 5ppt increase in NPL ratios. Our workings indicate a median hit of 30% (assuming 100% provision coverage and no tax benefit). Meezan Bank and Bank Al Habib are the most sensitive to higher NPLs, while United Bank is the least sensitive.

High capital buffers can help banks maintain normal operations even if NPLs rise. CET1 buffers for our selected Pakistan banks currently stand at a median of 3ppt over the State Bank of Pakistan's minimum requirements. MCB and MEBL have the highest buffers, while BAHL ranks at the bottom of the list. 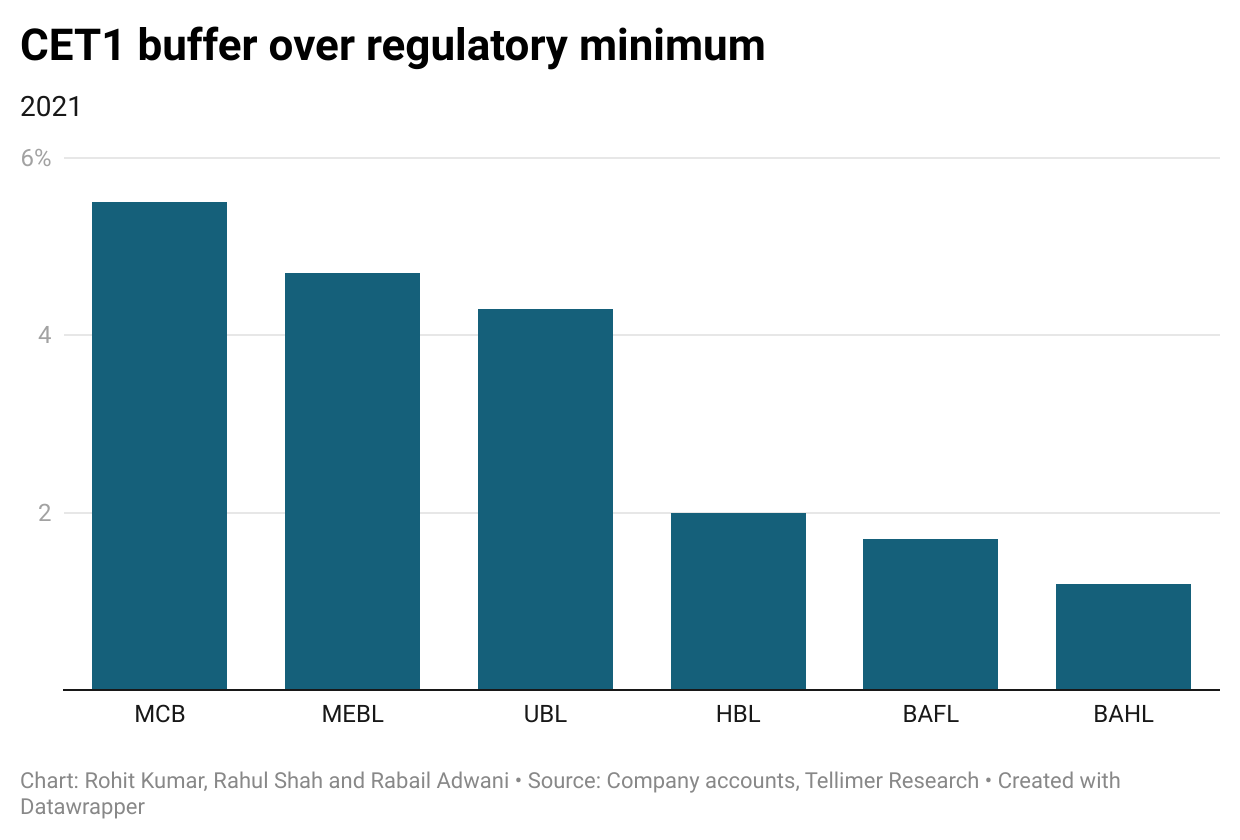 Based on the capital buffers, our workings suggest that our selected banks have the room to sustain a median 3ppt rise in the NPL ratio (assuming 100% provisioning and no tax credit).

MCB and United Bank can sustain the highest NPL ratio increase, while Bank Al Habib has only a very limited capital cushion.

BAHL is most exposed to NPLs build-up, UBL least

Based on the relative ranking of banks in our sample on the asset quality metrics discussed above (sectoral exposure, book value sensitivity, CAR buffer), Bank Al Habib appears to be the most sensitive bank – a fresh NPL cycle could hit the bank hard. (That said, in past NPL cycles, BAHL has managed to keep delinquencies lower than its peers due to its superior risk management, which may also help this time.) By contrast, UBL is relatively well-positioned. 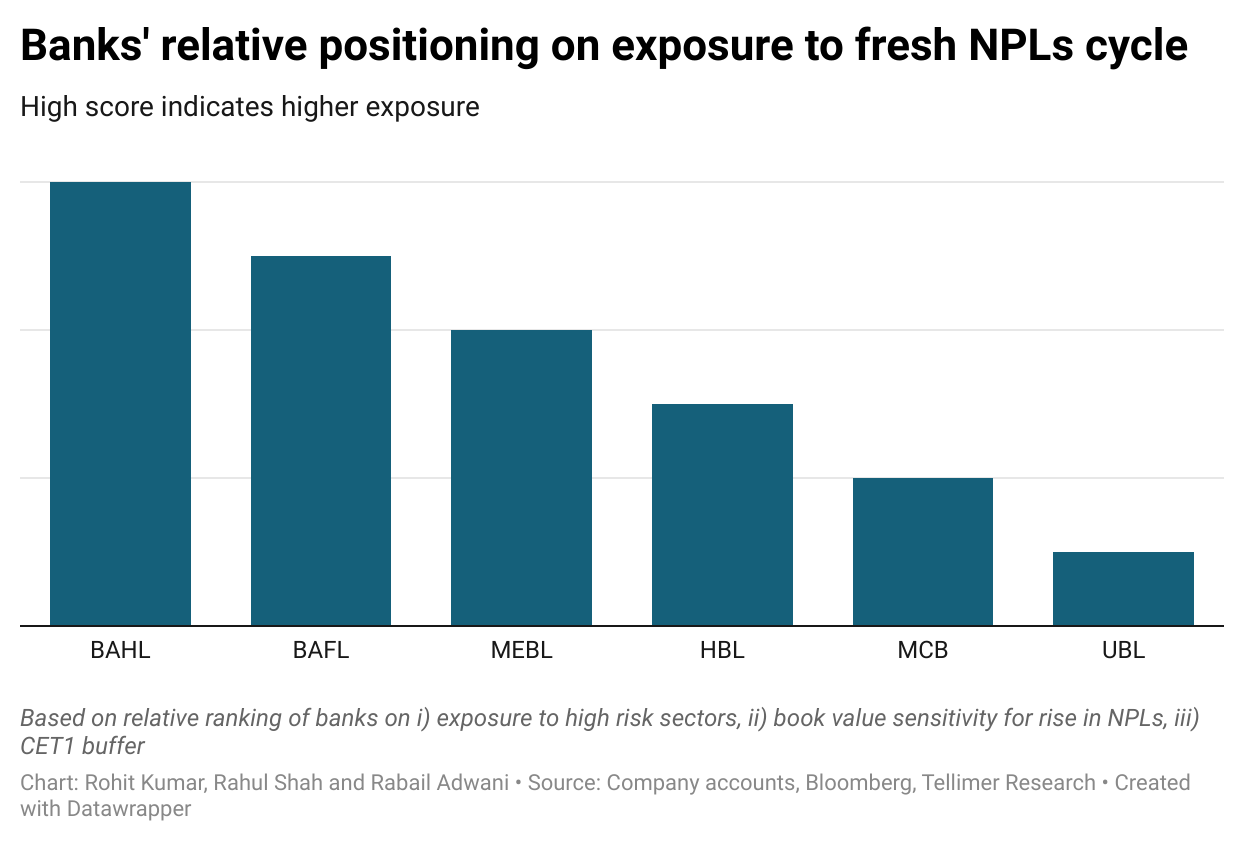 Pakistan banks are currently trading at median 2023f PE and PB of 3.0x and 0.6x, respectively; these multiples are at median 60% and 50% discounts to the past five-year average.

Comparing the justified P/B multiples (using 2023f ROE, 19% cost of equity and 10% growth rate) with 2023f P/B multiples, and assuming NPLs are the only reason for the discount, Pakistan banks appear to price in a c12ppt hike in the NPL ratio, which we think is aggressive considering historical trends and the lending approach of banks over the past few years.

Valuations of Meezan Bank and Bank Al Habib are pricing in the highest NPL increase. 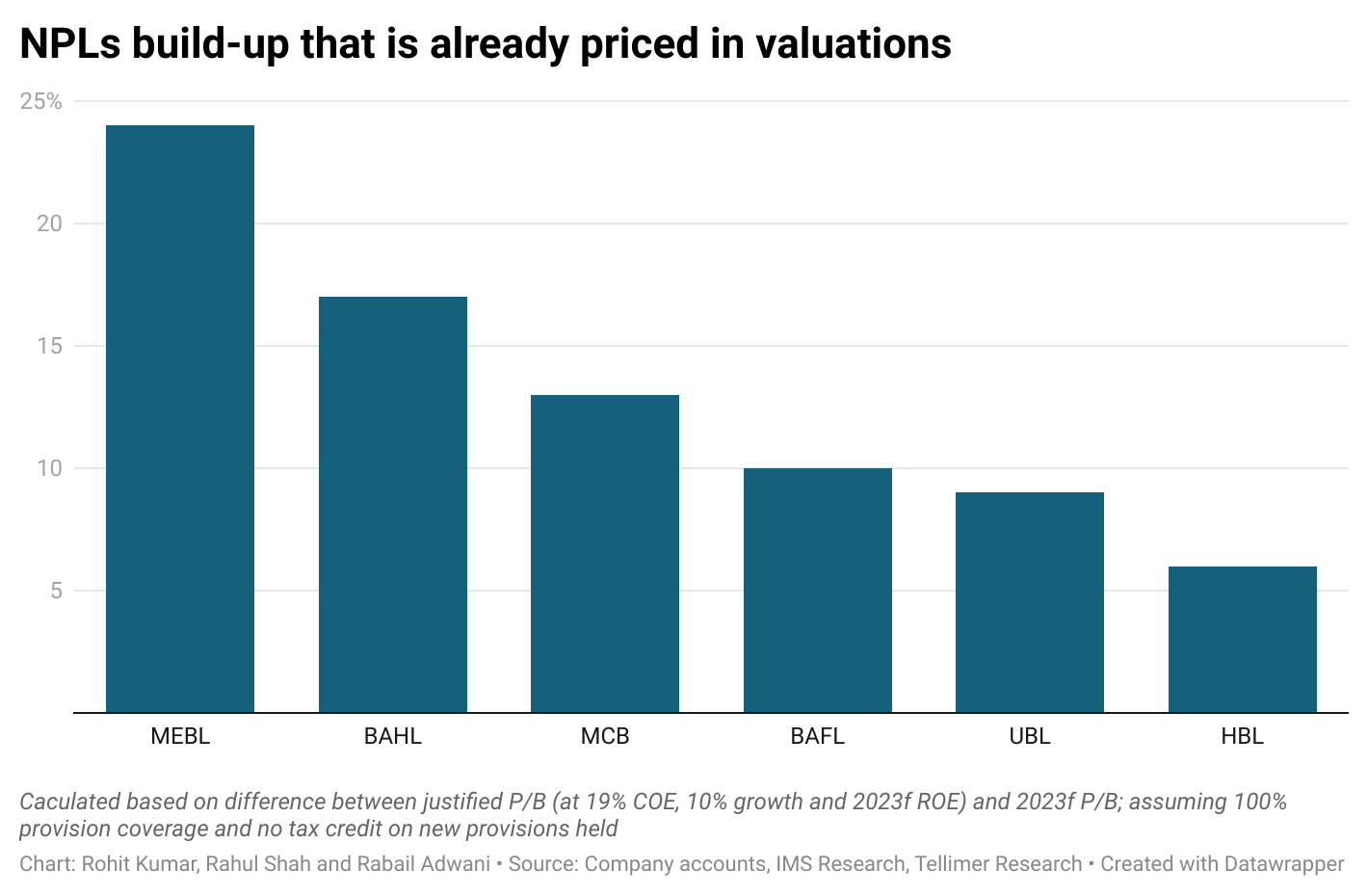