Pakistan banks are highly exposed to sovereign debt, and risks are growing

The exposure of emerging markets banks to sovereign debt is at an all-time high, and tighter financial conditions are putting pressure on government finances. Pakistan has one of the most highly exposed banking systems in emerging markets – half of its banking assets are sovereign exposures, equivalent to over 8x of the equity.

Banks have enjoyed high yields on these assets, but the risks are now growing. The government's funding needs are rising and accessing funding is becoming harder. Hefty fuel subsidies and delays in IMF negotiations are further worsening the situation.

In this report, we look at the exposure of Pakistan banks to sovereign debt, some recent developments that have affected the government’s financial position and the implications for investors.

Pakistan banks are heavily reliant on government securities, around half of banking assets are sovereign exposures. Government securities are 42% of assets while public sector loans are another 8%. The private sector has been largely crowded out (28% of total assets) as government funding requirement has remained high historically. 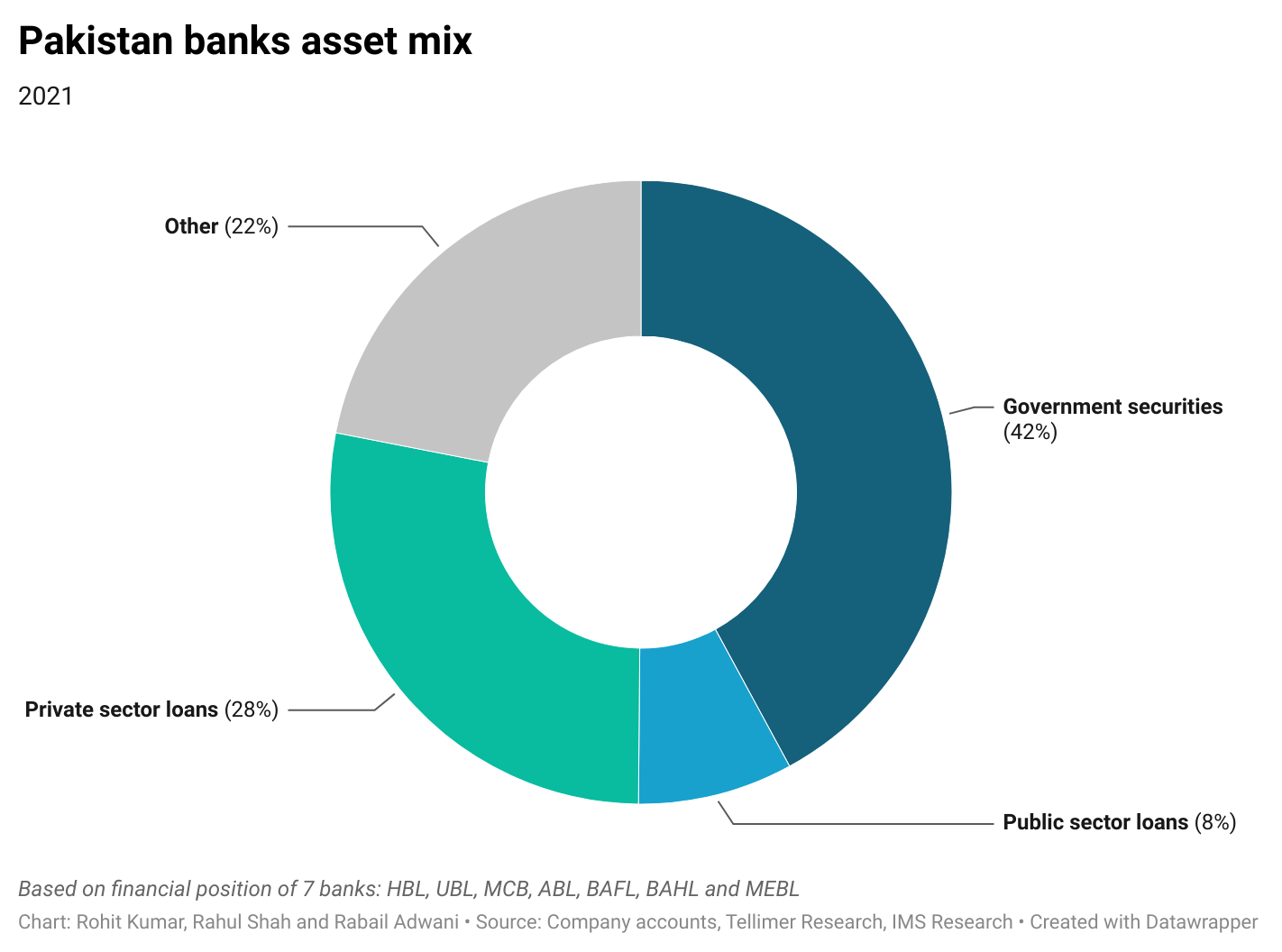 In the emerging markets context, Pakistan stands out as having high levels of sovereign indebtedness and bank exposure to government debt. Pakistan banks hold government securities worth 8.6x times of their tier 1 capital, compared with a median 1.4x for other emerging markets. 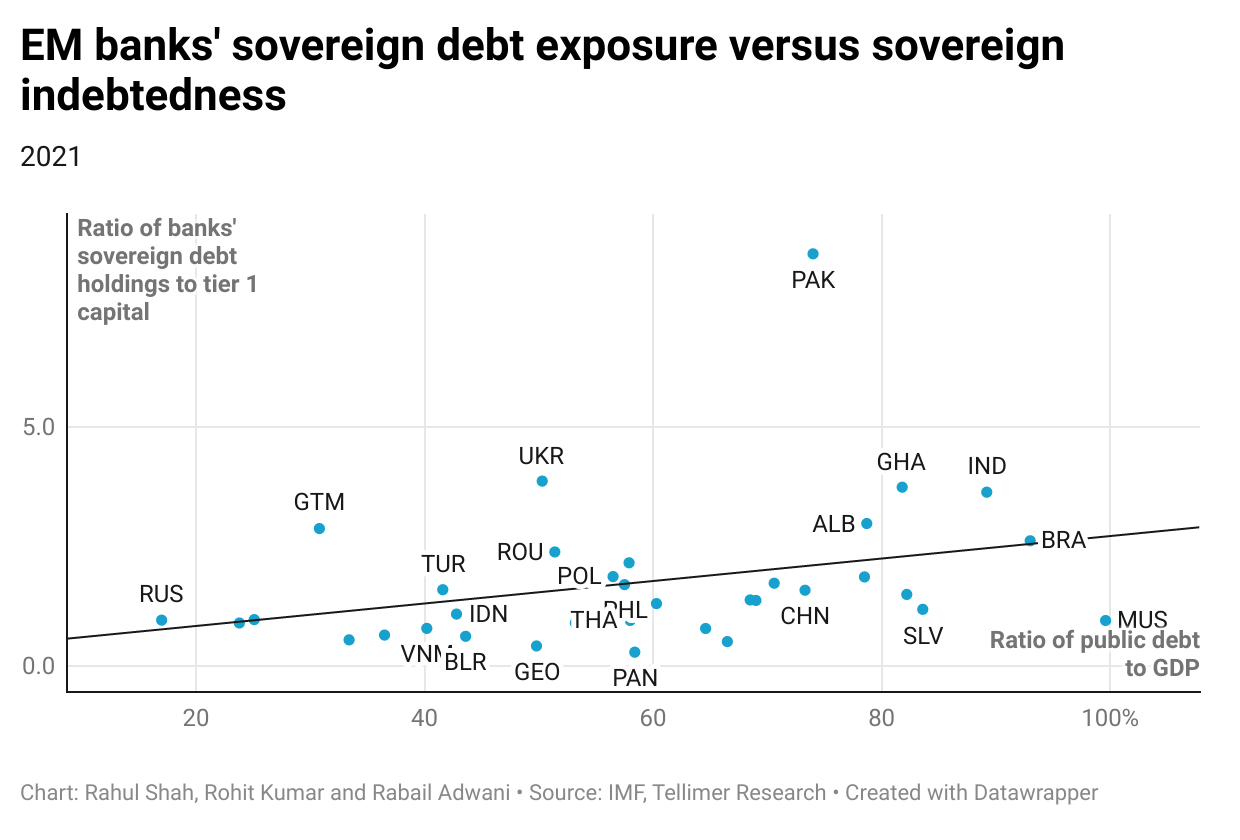 The government’s funding situation is worsening

Pakistan's government has historically relied on banks and the central bank – the State Bank of Pakistan (SBP) to fund its budget deficit. However, recent developments have brought unprecedented pressure on government finances. These include: 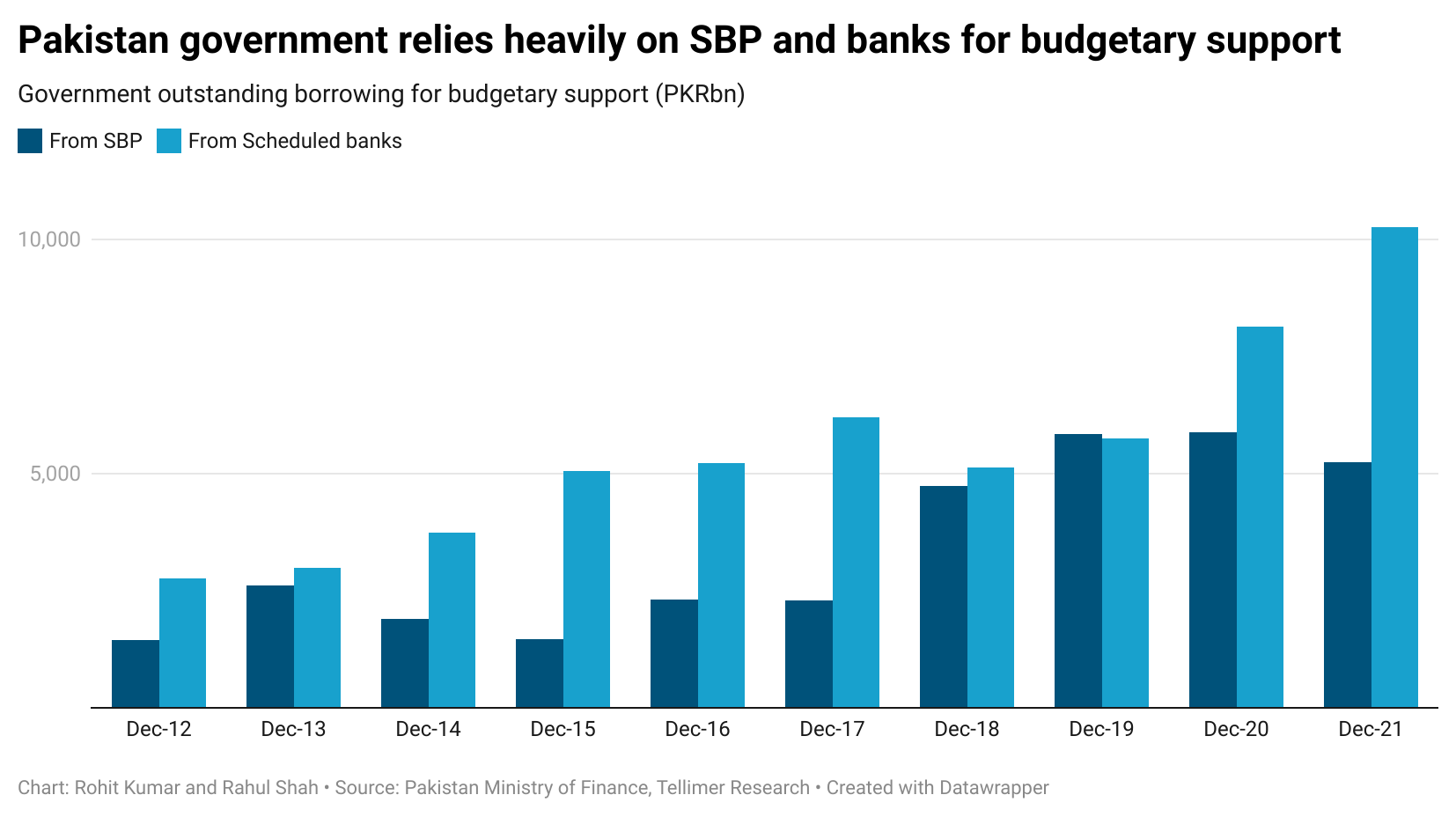 Which Pakistan banks are most exposed to sovereign debt?

Allied Bank appears to be most exposed to the public sector; 66% of its assets are parked in government securities and public sector loans. Meezan Bank has the least exposure (37% of assets).

Compared with 2020 levels, Meezan Bank has increased its government exposure, while Bank Al Habib and Habib Bank have trimmed theirs. 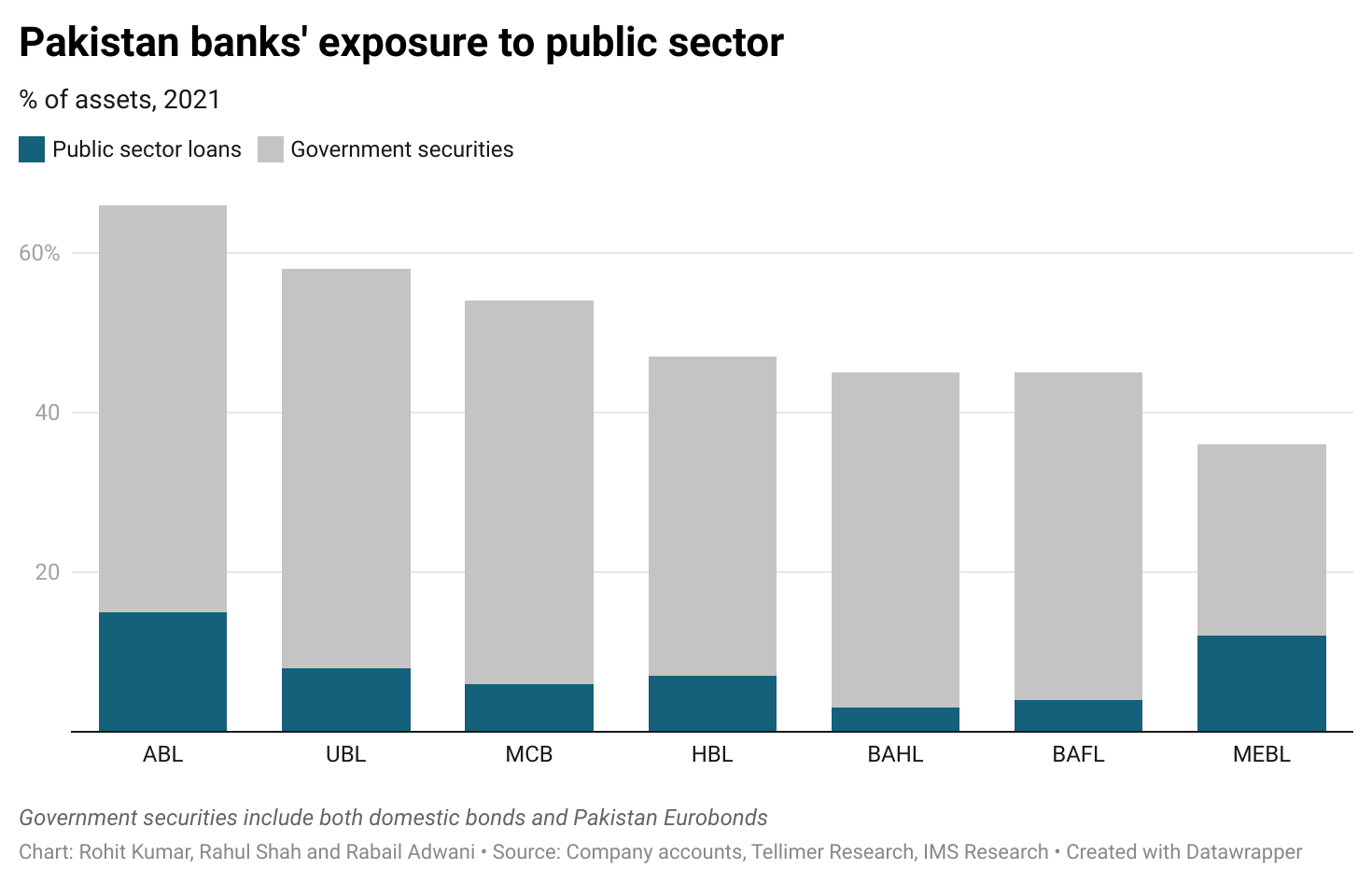 Pakistan’s external funding situation is even worse, its banks also have some exposure to eurobonds

Pakistan has even bigger challenges regarding its external account and reserves positions. The current account deficit is expected to stand at over 5% of GDP in 2022 (according to the IMF) and its FX reserves are now equivalent to just 1.4 months of imports. The yield on Pakistan eurobonds (maturing in 2024) has jumped from 5.1% at the start of the year to 17.9% currently, and the risk of default on external loans has increased in light of the delays to the IMF negotiations.

Pakistan banks have exposure to the country’s eurobonds as well. Although this exposure is much smaller than to the local currency bonds, for some banks, notably UBL and BAHL, it is still meaningful, at c15-20% of their equity. 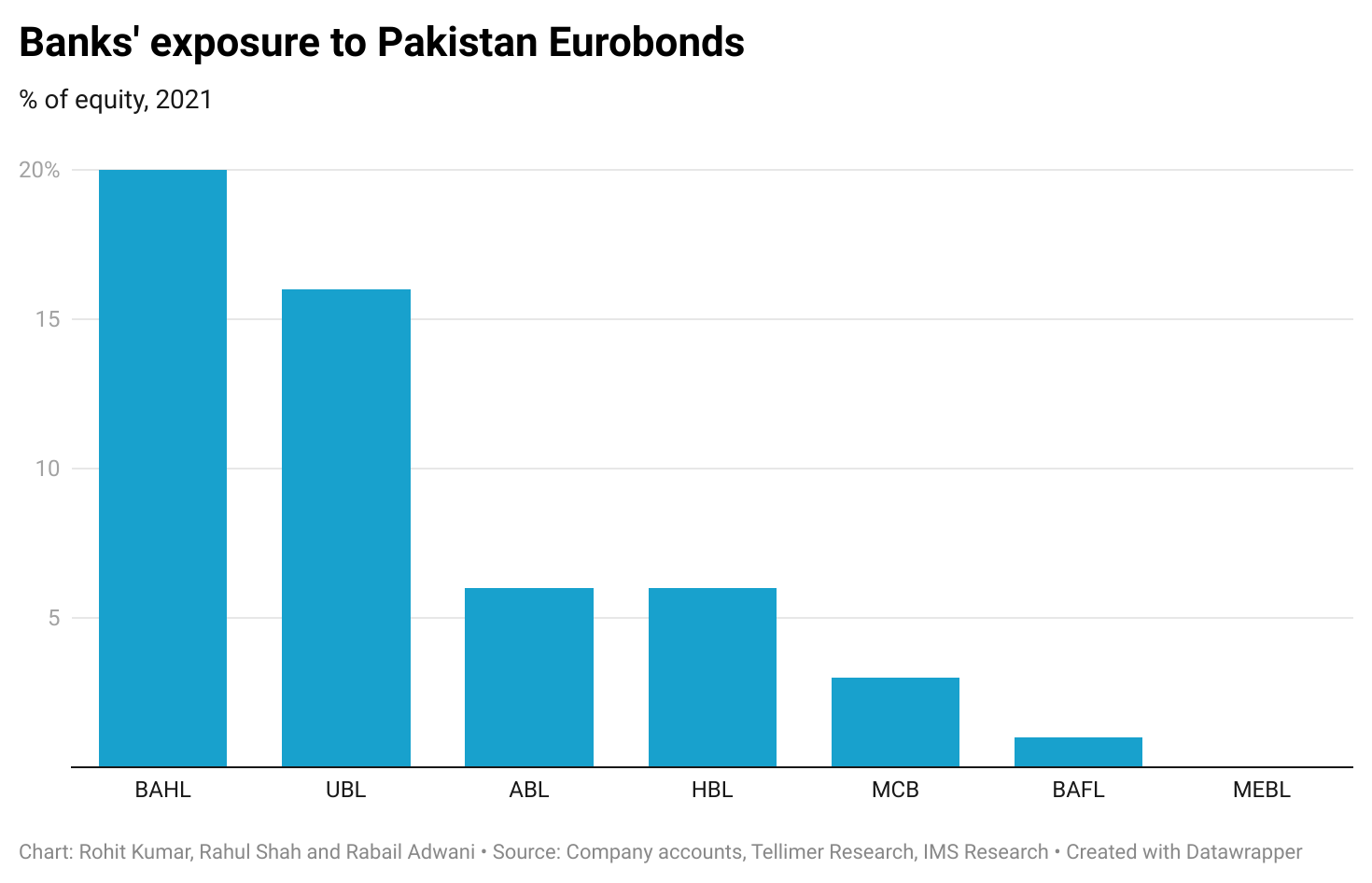 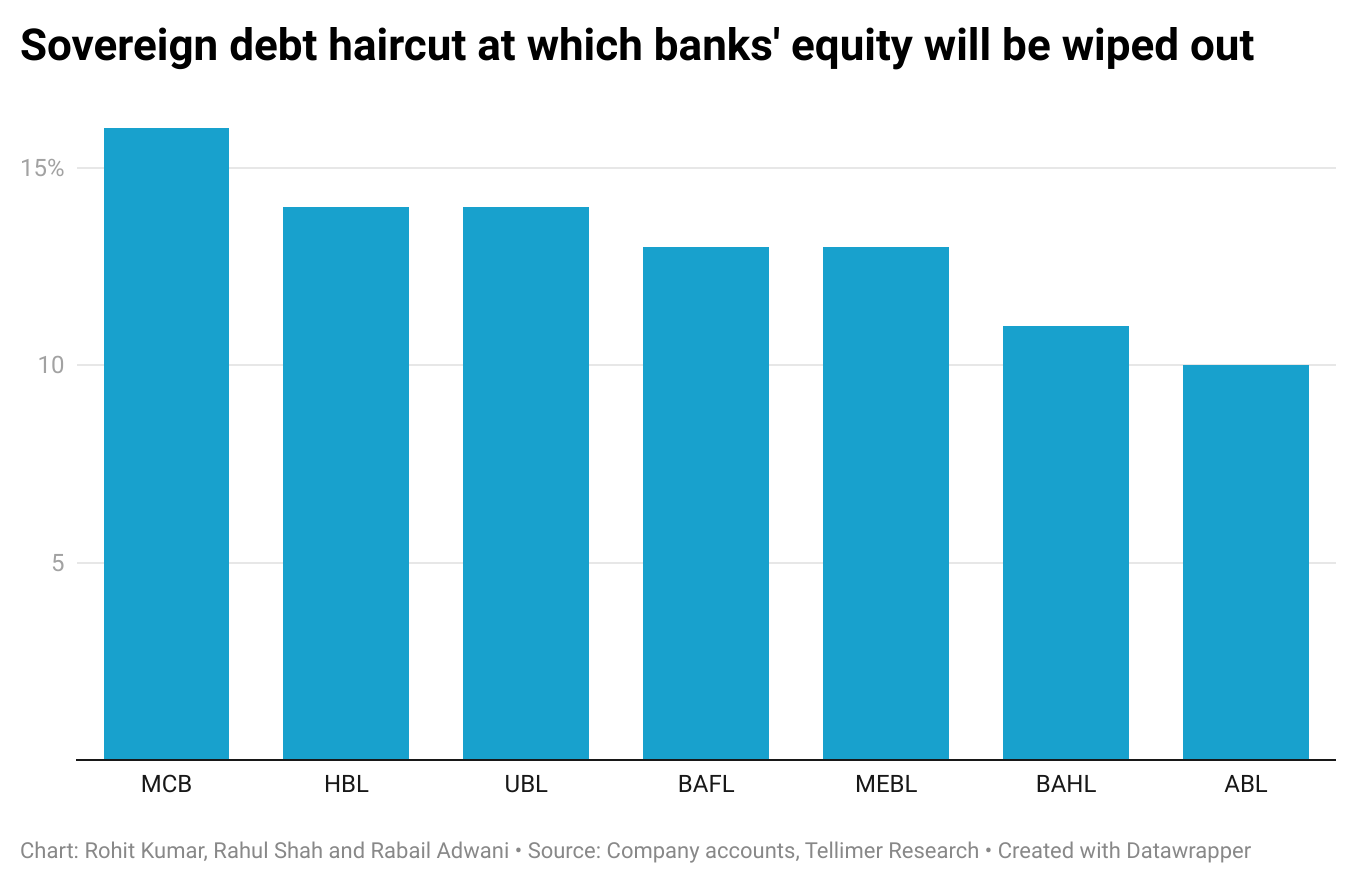 Pakistan banks are trading at a discount to historical valuations

Pakistan bank stocks have underperformed over the past few years. Currently, they are trading at a median 4.8x PE and 0.7x PB, 40% and 30% discounts to the past five years' average, respectively. The central bank has raised the policy rate by 525bps since September 2021, but this has not helped share price performance thus far.

We think investors are pricing in some of the risks we have highlighted above, but a sovereign restructuring – an extreme scenario – is probably still not in the price. 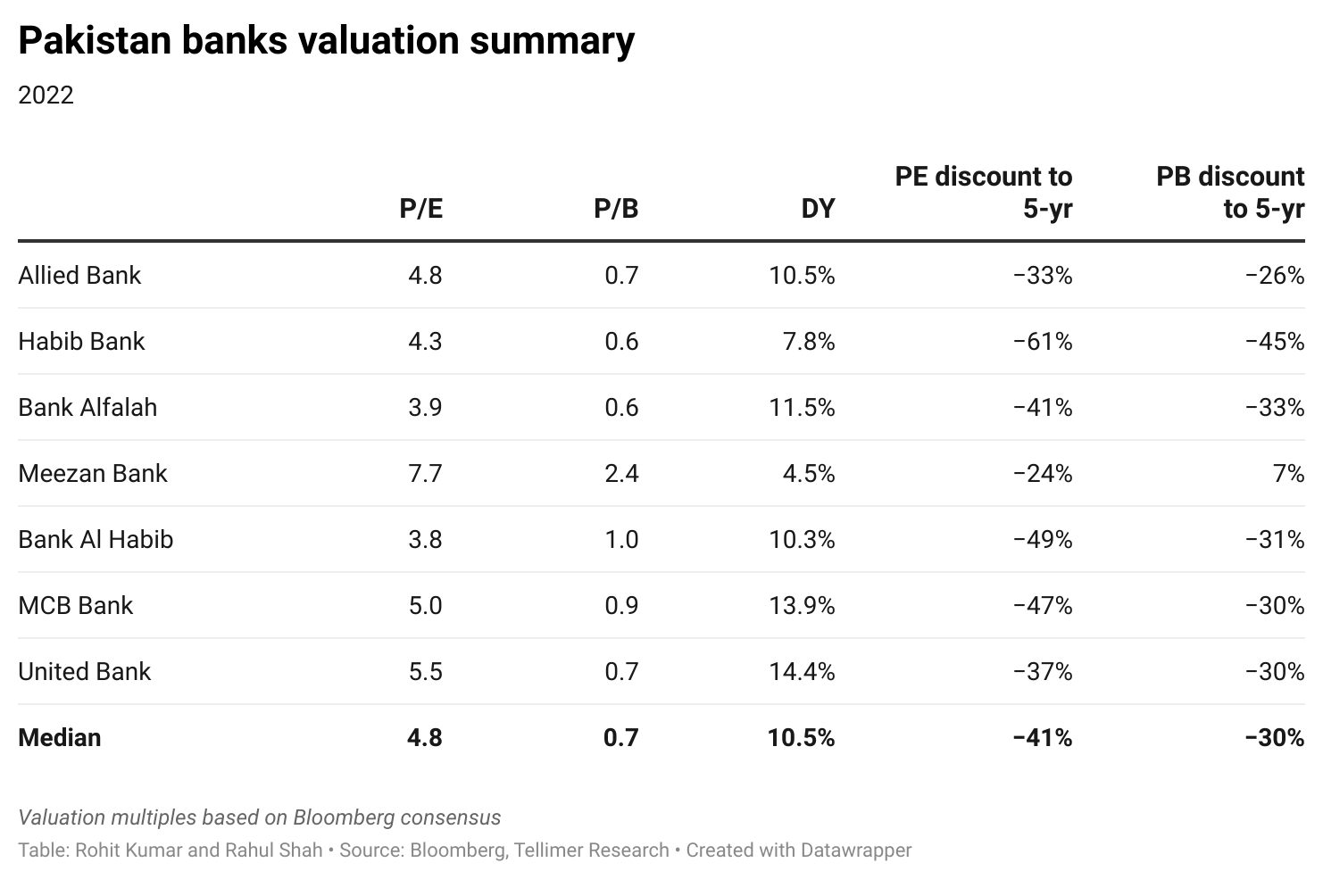