Outlook for EM carry trade worsens amid soaring US inflation

The word stagflation is taking hold with peak economic recovery coinciding with a strong rise in inflation across many parts of the world. This is causing yield curves to flatten across many markets as investors price for tighter monetary policy and lower growth, all of which assist gold which is seen as a hedge in times of distress and higher inflationary conditions. Given this backdrop it is not surprising to see that gold remains underpinned, albeit off its best levels at the start of the week. The yellow metal is currently holding above the $1855.00/tonne mark while Platinum and Palladium have given up just over 1% this morning with the losses attributed to a firmer dollar.

News out of the US is that the economy continues to recover. JOLTS data released on Friday made for interesting reading in that the number of workers who quit voluntarily rose to the highest levels on record. Not only does this show that confidence in people finding new work has improved, but with the number of job openings also remaining buoyant, it implies that new jobs are coming on stream as well. Therefore, the voluntary quits will be easily absorbed, and we would expect to see the headline labour market data continuing to improve with time.

It is worth reminding readers that US-Sino relations will come back into the spotlight as President Biden and Chinese leader Xi Jinping hold a virtual conference. Investors will be looking for signs that relations between the two are thawing. Many points of contention will be brought up.  Trade wars and geopolitics will likely dominate with China, indicating that it would like to discuss the issue of Taiwan. The US will be focused on human rights and trade wars.

The response from the USD to US inflation was powerful. It helped boost the USD in the latter part of the week and ended it on a high. The outlook for the USD is less convincing this morning, with the candlestick patterns already reflecting a retreat off those highs. This week investors moving will look for further clarity from the Fed concerning monetary policy and whether the retail sales data holds up better than the confidence numbers have. However, there seems to be a lot of tightening priced into the USD, and there is a good chance that the market corrects weaker through the week ahead.

Ethiopia: The US Treasury Department on Friday sanctioned four entities and two individuals in response to the situation in Ethiopia, saying Eritrean actors are contributing to the humanitarian crisis and military conflict in the country. The entities sanctioned are the Eritrean Defence Force, the People’s Front for Democracy and Justice, Hidri Trust, and Red Sea Trading Corporation. A US Treasury Department official was quoted as saying, “we condemn the continued role played by Eritrean actors who are contributing to the violence in northern Ethiopia, which has undermined the stability and integrity of the state and resulted in a humanitarian disaster.” The sanctions come just days after United Nations political chief Rosemary DiCarlo warned that Ethiopia risks “descending into widening civil war.” Eritrea in April acknowledged for the first time that its forces were taking part in the war in Tigray and promised to pull them out in the face of mounting international pressure.

Morocco: Authorities in Morocco are reportedly considering regulating supermarkets’ business hours and closing large ones, especially those located in low-income urban areas. In a local report citing Trade and Industry Minister Ryad Mezzour, the plan aims to protect hundreds of thousands of private grocery stores from growing supermarket competition. The measures are set to be included in a new bill regulating retail and domestic trade.

Malawi: Vice-President Saulos Chilima has urged the central bank to consider forcing lenders to lower interest rates and help spur economic growth. According to Chilima, the gap between deposit rates offered to customers and the rate charged for borrowing of more than 23% is too wide and must be addressed “as a matter of urgency.” Chilima added that “as the financial sector opened up, one would have expected competition to force the narrowing of the spread. That is not the case.”

Kenya: Kenyan Airways Plc has asked the government to settle $250mn in liabilities incurred as a result of the coronavirus pandemic as it gears up for returning to around 60% of operating capacity. CEO Allan Kilavuka said that discussions on the matter are underway with the National Treasury, which has previously guaranteed $750mn of Kenya Airways. Creditors include aircraft-leasing firms and technical suppliers. The Kenyan government owns 48.9% of the airline and is in the process of nationalizing it after years of losses, even before the pandemic. Kilavuka said that wiping out the additional liabilities will help him execute the recovery strategy and cost-cutting plan the carrier is devising with London-based consultants Steer Group.

Kenya: Data from the CBK showed that remittance inflows totalled $337.4mn in October 2021 from $263.1mn in October 2020, representing a 28.2% increase. The cumulative inflows for the 12 months to October 2021 totalled $3,605mn compared to $3,006mn in the same period in 2020, marking a 19% increase. The US remained the largest source of remittances into Kenya, accounting for 65.9% in October. Increasing overseas remittances will provide some support at the margin for the KES, which is trading at record low levels.

Nigeria’s currency rebounded in the parallel market as the Central Bank of Nigeria (CBN) boosted the sale of dollars to commercial banks. Specifically, the Naira strengthened to an average of 540 to a dollar on Friday from about 570 a week ago in the unauthorized markets in Lagos and other cities where the foreign currency is freely traded, according to the CEO from Lagos-based Forward Marketing Communications bureau de change Ltd. The CBN increased dollar sales to banks for distribution to businesses and individuals, which helped cut the number of customers that resort to buying foreign currency from unauthorized money changers.

Recall, in July, the CBN halted dollar supply to bureau de change operators, accusing them of aggravating the shortage of foreign currency by selling it on the black market. That did not stop the Naira’s slide. However, in recent weeks, the regulator has increased supply to banks and allowed more flexibility for the currency to weaken in order to attract more inflows. Against this backdrop, the rebound in the parallel market has seen the premium between the parallel rate and spot narrow to around 31% as of Friday. Note, the official spot rate ended at 413.48 on Friday.

Looking to this week, the Naira on the parallel market is expected to firm further on the back of higher oil prices and inflows from dollar-denominated debt amid slowing demand for hard currency on the unofficial market. Note that Nigeria raised a $4bn Eurobond at the end of the third quarter, giving the country headroom to defend the currency.

Fiscal dynamics remain a focal point for investors following the fiscal degradation that has taken place as a result of the COVID-19 pandemic. The COVID-19 pandemic has seen the Ugandan government ramp up spending to support the healthcare system while at the same time providing a buffer for the economy. In addition to increased expenditure, the economic fallout caused by the pandemic has led to a marked decrease in government revenue. The combination of which has led to a notable deterioration in the country’s fiscus over the past year and a half.

In a move aimed at limiting further fiscal degradation, Albert Musisi, commissioner for macroeconomics policy at the Finance Ministry, said on Friday that the government plans to maintain the fiscal deficit target at 6.4% of GDP for the year through June to avoid increasing debt, even if revenue undershoots forecasts due to the economic impact of lockdown measures. Musisi noted that the lockdown from early June to late July cost the government between UGX 300-350bn in lost tax revenue.

While the latest comments from the Finance Ministry will provide some reprieve to the ears of fiscal hawks, recall that last week Finance Ministry asked lawmakers to approve additional funding that will in part be used to fund shortfalls in Defense Ministry expenditure as well as classified expenditures. The shortfall in funding is partly due to the devastating impact of the lockdown measures on revenue collection. Going forward, although fiscal risks in Uganda are skewed to the upside, relative to most of its African peers, the risk of sliding into a position of fiscal distress remains muted with the country still in a sustainable debt position.

While emerging markets have benefitted from favourable carry trade conditions, a strategy whereby a high-yielding currency funds the trade with a low-yielding currency, in recent months, the spike in US inflation is detracting from the carry trade appeal of emerging market currencies. To display this, we look at the Bloomberg Carry Trade Index, which has fallen by more than 4% over the past two months, marking the biggest slide in the index since March 2020. 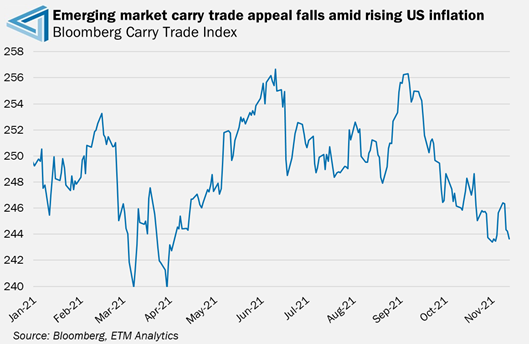 Persistently strong inflation in the US is putting pressure on the Federal Reserve to tighten policy at a faster pace and is raising the prospect of higher costs for dollar borrowers. This means less extra yield or a lower carry trade for emerging market currencies. Up until recently, investors had taken comfort in the Fed’s dovish policy guidance and were using the opportunity to take advantage of the favourable carry trade conditions.

While central banks across the globe continue to communicate that the recent bout of strong inflation Is transitory, inflation has proved to be far stickier than many central banks had expected. On the back of this, we have already seen many major central banks begin to tighten policy, which is reducing the relative yield gap outlook between developed and emerging markets.

Going forward, with the monetary policy differential between the likes of the US and UK versus Japan and the EU set to widen in the months ahead, we could see investors turn to the Euro or the Yen for cheaper funding costs. On the other side of the equation, according to a study compiled by Bloomberg, the outlook for carry looks brighter for currencies in Latin America, Middle East Africa than it does for Asian currencies. Currencies, where rates are seen rising the most, will have the most attractive appeal for carry traders in the months ahead.