OPEC+ cut its collective target output by 2 million barrels per day, taking effect from November, on 5 October. That is consistent with the view that the group is comfortable with, in more plain speak, attempting to manage oil prices (Brent) at around at least US$90pb.

Last month OPEC+ signaled its willingness to cut, albeit a small 100,000bpd reduction to output target. Today's announcement follows through on that signal.

Current levels of under-production versus target likely implies a cut in actual supply of significantly less than the 2mbpd figure.

OPEC+, as a whole, is already producing significantly below its targets, by at least 1.5mbpd in September, driven mainly by Angola, Iraq and Nigeria. This existing shortfall may be over 2mbpd, if a lower estimate of Russian output is used. Effectively, a number of producers are already close to compliance with their new output targets.

Nevertheless, the direction of change matters, particularly in the context of the 9% pick up in oil price in the week prior to this OPEC+ meeting – the ultimate decision should mean most of that gain sticks.

This followed a period from the start of June to the third week of September, when oil price fell almost 30% on concerns about slowing global growth, better near-term output than expected from, first, Russia, and, later, Libya, and the release of inventories from the US Strategic Petroleum Reserve.

The backdrop for this OPEC+ decision is the external account and inflationary pain of the poorer oil importers in emerging markets, difficult mid-term Congressional elections ahead of US President Biden, where lower prices at the pump might have helped his Democrats, and the challenge of the international anti-Russia alliance to corral others, such as India and, now, more obviously, Saudi.

The overall framework between OPEC and 10 non-OPEC countries has been renewed until the end of 2023, which suggests that disagreements over the baseline for total capacity, which led to disagreement between Saudi and the UAE in mid-2021 are not resurfacing.

And narrowing the gap between actual and targeted output enhances the future credibility of OPEC+ when it next changes its production target.

The next scheduled OPEC+ meeting is on 4 December. 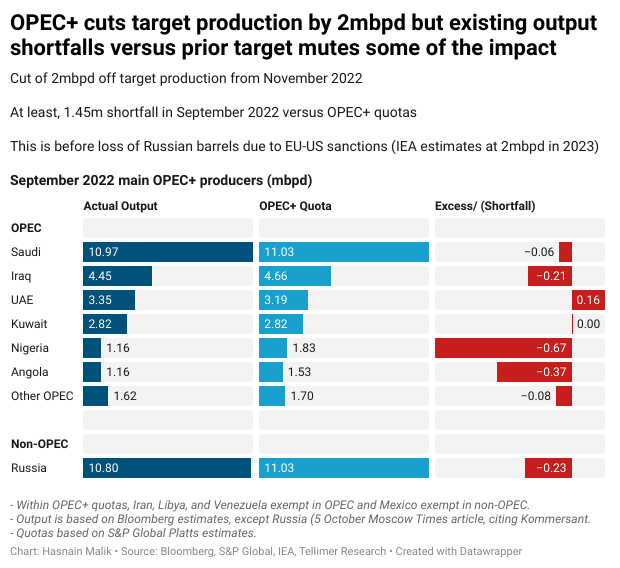 The OPEC+ decision has five implications.

The move demonstrates that Russia is still part of the cartel framework and Saudi and UAE, both of which control almost all immediately accessible spare capacity, are on the same page. 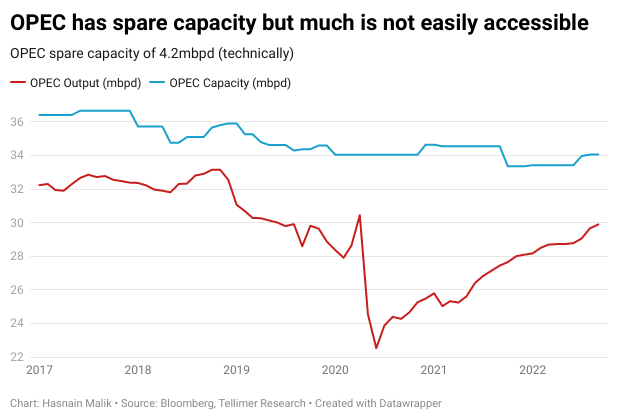 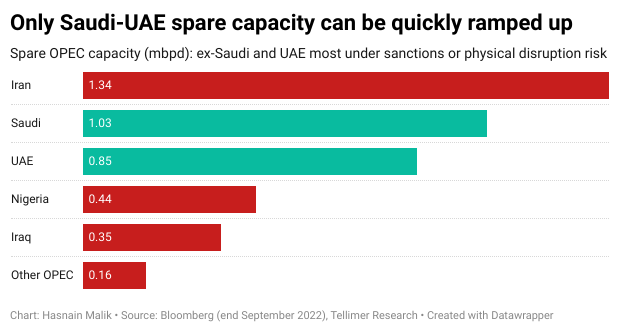 Global oil demand factors equal, the announcement should temper hopes of net importers of fuel that OPEC+ would stand by as oil prices tumbled, and, inversely, provide a fillip to the fiscal and current account outlooks of the oil exporters. 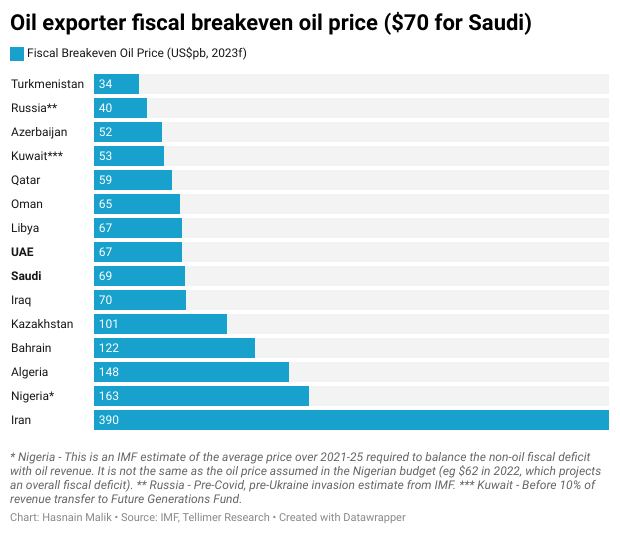 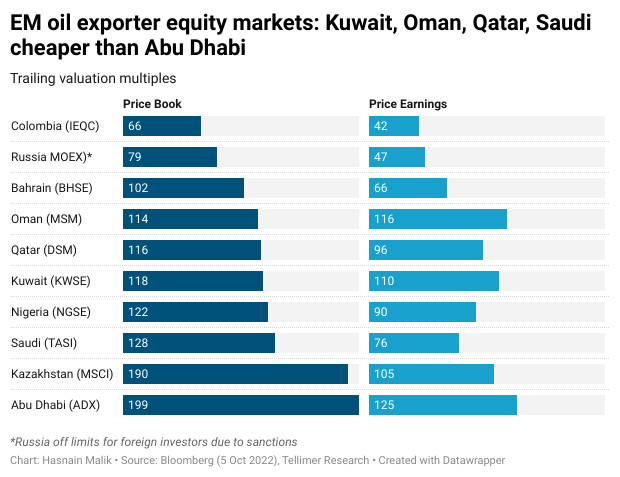 OPEC+ cuts confirm the impotence, at least for now, of US President Biden in influencing the group's decisions in a manner that helps him to claim credit for bringing down prices at the pump and, in advance of mid-term Congressional elections on 8 November.

Biden may now more forcefully pursue export controls on US refined petroleum (which may end up in being self-defeating because it perpetuates higher global prices), as well as the G7 price cap on purchases of Russian oil.

In theory, Biden could encourage US Shale producers, the one segment of the global oil and gas supply base where he has most direct influence, but this would risk alienating the environmentally conscious part of his and the Democrat party's voter base at a time he and the party needs them. 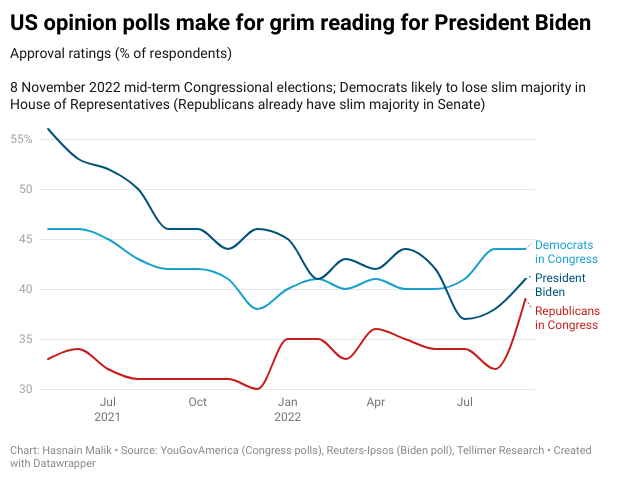 Apart from China, of course, two other significant centres of global influence are now visibly not quite on the same page as the US, EU, Japan (as well as Australia, Canada, New Zealand, and South Korea) when it comes to presenting a united front against Russia.

India has again demonstrated its desire for autonomy in international relations by abstaining from the latest resolution in the UN to condemn Russia (this time at the Security Council and over the specific issue of annexation).

Saudi, as well as the UAE and, to some degree, other US-aligned countries in OPEC+, has now demonstrated that sustaining cooperation with Russia over oil price matters more than falling into line on the Russian policy of the US, its historic security guarantor.

(5) Fuel for the NOPEC bill

NOPEC (The No Oil Producing and Exporting Cartels Act) is a bipartisan proposal in the US Congress to remove the sovereign immunity from prosecution in a US federal court for national oil companies, eg Saudi Aramco, and all member countries of OPEC+, if accused of acting as part of a cartel.

For NOPEC to pass into law requires a majority vote in both houses of Congress and assent by the President. If oil prices escalate again, the risk of a political consensus, which is likely missing currently, behind NOPEC increases.

The long-term repercussions of NOPEC could include the initiation of a price-war by OPEC+ (in order to cause distress in US shale), reciprocal lawsuits against the US government for its influence on domestic agricultural output, and greater risk to international sales of US military equipment suppliers.