An oil price war is just what the world economy didn't need right now as it confronts the global impact of Covid-19, but that's what it has got. Oil prices had already been sinking this year, as investors weighed the global demand shock from Covid-19, but the new slump – which signals a strategic difference in a four-year-long marriage of convenience between Saudi and Russia – adds an extra layer of risk to what was an already complex global situation. It also shows the limits to the international policy coordination that was beginning to emerge last week.

Low oil prices, on top of the global economic impact of Covid-19 and heightened risk aversion, will have (and has had) a negative impact on EM/frontier assets. In light of this, we make some changes to our investment recommendations in some markets (in part to bring them up-to-date belatedly with market movements). We downgrade Ecuador, Angola, and Tajikistan hard currency debt and Nigeria local, given the risks from lower oil prices and/or tighter external financing conditions. We prefer Senegal, Benin, Dominican Republic, Serbia and Vietnam.

Monday's sharp oil price fall follows the breakdown of Saudi and Russia cooperation on oil output via OPEC+ over the weekend. WTI is now about US$34pb, down 20% from Friday's close, its lowest level since 2016, and below its GFC lows in 2008-09. It's not clear how long oil prices will remain at such low levels, depending on the asymmetric goals of Saudi Arabia and Russia, as noted by our Equity Strategist Hasnain Malik. But the longer they do, clearly the worst the impact will be for oil exporters, and risk generally, and for some countries even a few weeks/months will be enough to cause real pain. Oil prices rebounded about one quarter after their 2016 lows (although even then, were still well down on previous levels). Oil producers may also decide to go it alone and increase production, outside the constraints of OPEC+, although this risks more downward pressure on prices.

However, our lesson from the 2014-16 episode of low oil prices is the market impact will go beyond mere losers (oil exporters) and winners (oil importers), as it leads to a risk re-pricing throughout the EM credit universe. The EMBIGD spread had already risen by some 100bp over the two weeks to 6 March to 402bp (since 21 February – before Covid-19 concerns really hit global markets), and rose a further 69bps yesterday to 471bp, its highest level in four years.

There will also be a currency impact. We also think the oil price impact (as well as risk aversion more generally) will be negative for EM currencies (positive for US$ strength), obviously especially for oil exporters, which would also put local currency EM debt under pressure. Floating currencies will likely be able to fall against the US dollar to absorb the external shock (but this might require domestic monetary tightening to offset any inflationary pass through), while currency pegs will come under pressure to be devalued, depending on the monetary authorities' willingness and ability to defend them, and their perception as to the duration of the oil price shock. Those with adequate reserves may choose to intervene and sell dollars, using reserves to maintain existing pegs, if they believe the shock is short and temporary.

Another potential impact will be on sovereign borrowing and fiscal plans. Those frontier markets that might have been looking to come to the international bond market might shelve plans given the widening in yields and, given the choice, unwillingness to pay higher rates. This might force countries either to pursue alternative financing sources (eg IFIs or domestic) or force them to adjust fiscal plans (increase revenue/cut spending) in order to bring financing needs down, into line with more limited available finance. Fiscal adjustment could however have a negative impact on domestic economic growth, while fiscal austerity could meet domestic resistance.

Of course, EM and low-income countries can take advantage of emergency financing provided by the IMF, announced last week, although this may only have a temporary beneficial impact.

But the main concern is that, simply, no-one knows what the global economic impact of Covid-19 will be, and how long it will last, and that traditional macroeconomic policy levers are limited in what they can do. And while we have economic models to help us assess the impact of lower oil prices or a banking crisis on the world economy and EM, no such models exist for this kind of shock. 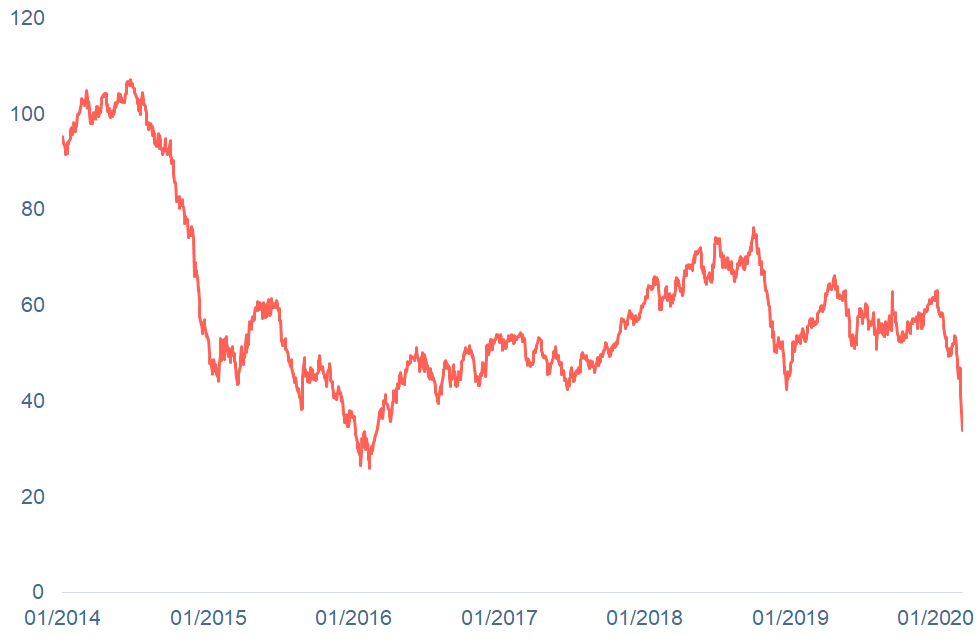 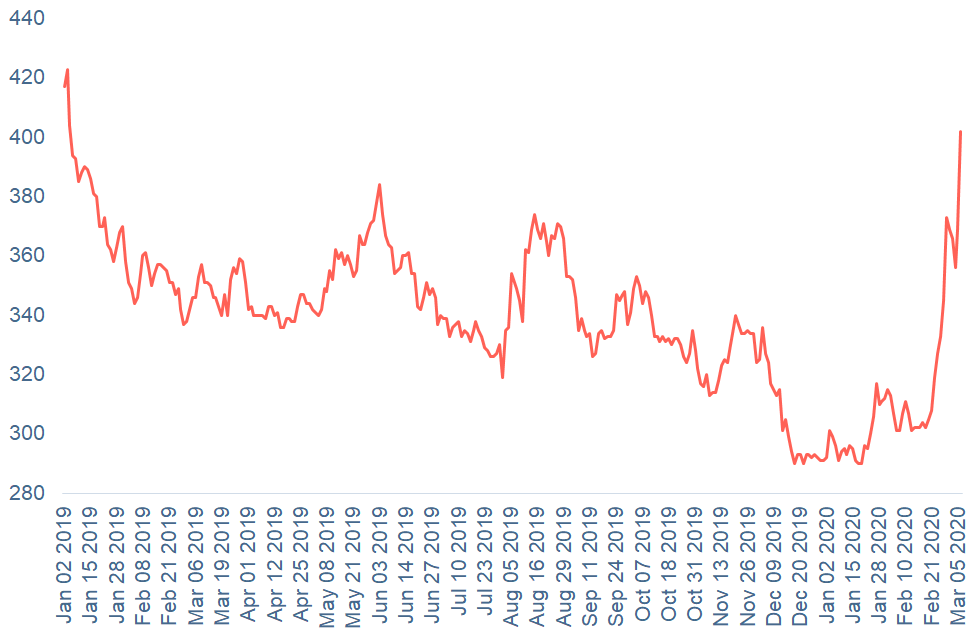 It is difficult to make investment calls in this context and identify safe havens in the EM/frontier universe. Indeed, it would be tempting to underweight risk more generally, but then again, 10pt bond price falls may have opened up more attractive valuations in some markets, depending on one's view on the magnitude and duration of this shock. Countries with better fundamentals (low fiscal and external deficits, or surpluses), stronger balance sheets (low debt and high reserves/savings), lower refinancing needs, and faster GDP growth, should be better able to withstand this global shock and have the policy space to react to mitigate the impact, whether or not they are oil exporters. For instance, Kazakhstan is in a stronger position than Angola. The market has largely begun to differentiate along these lines (see Table 1). Sovereign eurobonds from frontier oil producers (Nigeria, Gabon, Angola) have seen sharper falls than their higher-rated peers (Qatar, KSA, Kazakhstan).

We highlight a few country cases.

Ecuador's US$ bonds have been among the worst casualties of the Covid-19 crisis, and related oil price fall, because of the country's already fragile financial situation in the context of an IMF programme. Lower oil revenues and weaker growth risk undermining the government's ability to hit its fiscal targets and the public's willingness to tolerate deeper adjustment. According to recent reports, the authorities are working on a revised disbursement schedule with the Fund, following a recent staff mission as part of the fourth review while the authorities submit another fiscal reform bill. In this environment, the IMF may be a bit more lenient and Ecuador could even choose to draw on the emergency financing the Fund made available last week to help countries mitigate the economic impact of Covid-19. But we fear that if the IMF programme doesn't work, there may be no alternative to debt restructuring; and markets know this, too. We take this opportunity to formally and belatedly downgrade our Buy on Ecuador to Hold (rather than a Sell given the dramatic price movement we've seen), with the price of the 7.875% 2028s now 46.8 (mid), down from 89.2 at end-2019. Ecuador was one of our top picks coming into 2020.

We downgrade Angola to Hold from Buy, with the yield on the 8% 2029 now 10.6%, up from 7.1% at the end of January, amid similar concerns as to the impact of lower oil prices and heightened risk aversion on the country. We still like the authorities' strong reform commitment and ownership of its IMF programme, but with public debt at 111% of GDP (IMF projection for 2019) and still low reserves (US$11.3bn net reserves in January), amid weak GDP growth, it is vulnerable to low oil prices and has little space for manoeuvre. Its IMF programme is already the biggest in SSA.

In Nigeria, we retain our Hold on the US$ bonds but downgrade our view on local T-bills and FGN bonds to Sell (from Hold and Buy respectively). Nigeria's US$ bonds have also been among those that have seen the biggest declines in response to the oil price fall. Ten-year yields have risen to 8.9%, up from 6.7% at the end of January (7.143% 2030). Nigeria's relatively low (albeit rising) public debt burden (30% of GDP) and higher reserves coverage might put it in a better position than some other oil exporters to weather the shock (compared to say, Angola and Ecuador), but we think lack of reform and weak policies have left it exposed to lower oil prices (see our Nigeria 2020 credit outlook). Lower oil prices pose a risk to the country's nascent recovery, and could even tip it back into recession, while we see risks to the exchange rate peg. Official reserves have already fallen by US$1.5bn (4%) over the past month to US$36.2bn (as of 5 March, the central bank's moving average basis).

Past form suggests Nigeria will seek to avoid any FX adjustment until it absolutely has to, with a pain threshold probably around US$26bn based on the 2016 experience. That gives it about 6-7 months at the current burn rate; this may be long enough to see if through a temporary shock and maintain its official parity. If not official devaluation, the oil price fall may lead instead to a widening of the parallel rate and/or FX shortages. The authorities will also likely seek to avoid turning to the IMF for help. The authorities may also shelve their plans to come to the market, given prevailing yields (Ghana and Gabon may consider themselves lucky they issued when they did earlier this year). Nigeria may instead look to concessional external finance and/or domestic borrowing, although the greater risk of currency devaluation may deter the non-resident capital inflows into OMOs upon which the authorities have so relied for funding.

We downgrade Tajikistan to Hold from Buy, with the yield on the 7.125% 2027 now 11.4%, up from 9.5% at the end of January. While we still think debt service on the bond looks manageable given strong reserves' coverage, higher commercial borrowing costs will limit financing options for the Rogun Dam and add to project uncertainty. This may push the country more to concessional financing from multilaterals and/or China, which may not be a bad thing from a bondholders' perspective, but we think investors may want to see greater visibility on this before returning amid such heightened global uncertainty. Tajikistan was also one of our top picks coming into 2020.

Bonds from other frontier oil exporters such as Gabon, Iraq (we already have a Sell) and Republic of Congo (we retain our Hold) are also vulnerable.

We think Senegal, Benin, Dominican Republic, Serbia and Vietnam may offer some scope for diversification and relative out-performance in this environment (countries with stronger GDP growth (4-7%), better fundamentals (small or modest current account and fiscal deficits, low or manageable public debt burdens), and beneficiaries – for now – of lower oil prices). That said, Dom Rep is vulnerable to slower global and US economic growth, weaker tourism and lower commodity prices, while Vietnam is also vulnerable to weaker Chinese and regional growth. We have Buys on Senegal and Benin.