We analyse the potential balance of payments (BoP) impact of lower oil prices (an oil price shock) for a selection of 16 oil exporters. We assess the current account impact through the loss of export revenues and compare this to the current level of international reserves for each country. The estimated current account impact relative to reserves provides a simple indicator of external vulnerability and gives us a sense of the likelihood and extent of any resulting BoP liquidity crisis. We caution, however, that this is a static analysis and may therefore overstate the actual impact (for example, we ignore any offsetting policy response to mitigate the loss of export revenues) and we ignore the financial account shock on the BoP too, which could be even more severe for those with large gross external financing needs, although we think this still serves as a useful exercise to assess where vulnerabilities might reside.

Put simply, a 50% fall in the oil price translates into a 50% fall in oil export revenues, other things equal. This would, again ceteris paribus, translate to an equivalent change in reserves (or fall in reserves compared to the baseline). However, the current account impact would also depend on the extent of oil dependence. If oil makes up the vast majority of a country’s exports (which it does in Angola, Iraq, Kuwait and Nigeria), then this translates virtually to a 1:1 fall in total exports. However, if oil makes up only a small share of overall exports (for example, Indonesia, Ghana and Colombia), the impact on total exports is scaled similarly and becomes less significant overall (assuming unchanged non-oil exports). The overall current account impact would also depend on changes in other current account items, while the overall BoP impact would further depend on other BoP flows, although for simplicity we ignore those impacts here.

For our estimated current account impact, we calculate oil export revenues for each country as the product of oil prices and oil export volumes, and measure the loss of oil export revenues in our shock scenario by the price differential, assuming volumes are unchanged. For oil prices, we take as our baseline the pre-crisis 2020 forecast, given by either the national government's budget assumption, the latest IMF country report or the October IMF WEO projection. The pre-coronavirus average oil price assumed for 2020 across our sample is cUS$58/bbl. For our oil price shock, we assume an annual average oil price in 2020 of US$35/bbl; we note that the new IMF WEO published yesterday assumes about the same price based on oil futures (US$35.61 in 2020). Given oil prices averaged around US$50/bbl in Q1 (US$51 for Brent, US$47 for WTI), this implies average prices in the low 30s for the rest of the year. Clearly there is some uncertainty around the outlook, although we note that production cuts agreed at the OPEC+ meeting last Thursday do not appear to have changed the price outlook significantly at this stage given global demand pressures. Hence, on average, the fall in oil prices in our oil price shock scenario is of the order of 40% compared to the baseline, although there are marked differences across countries, depending on the initial projection. 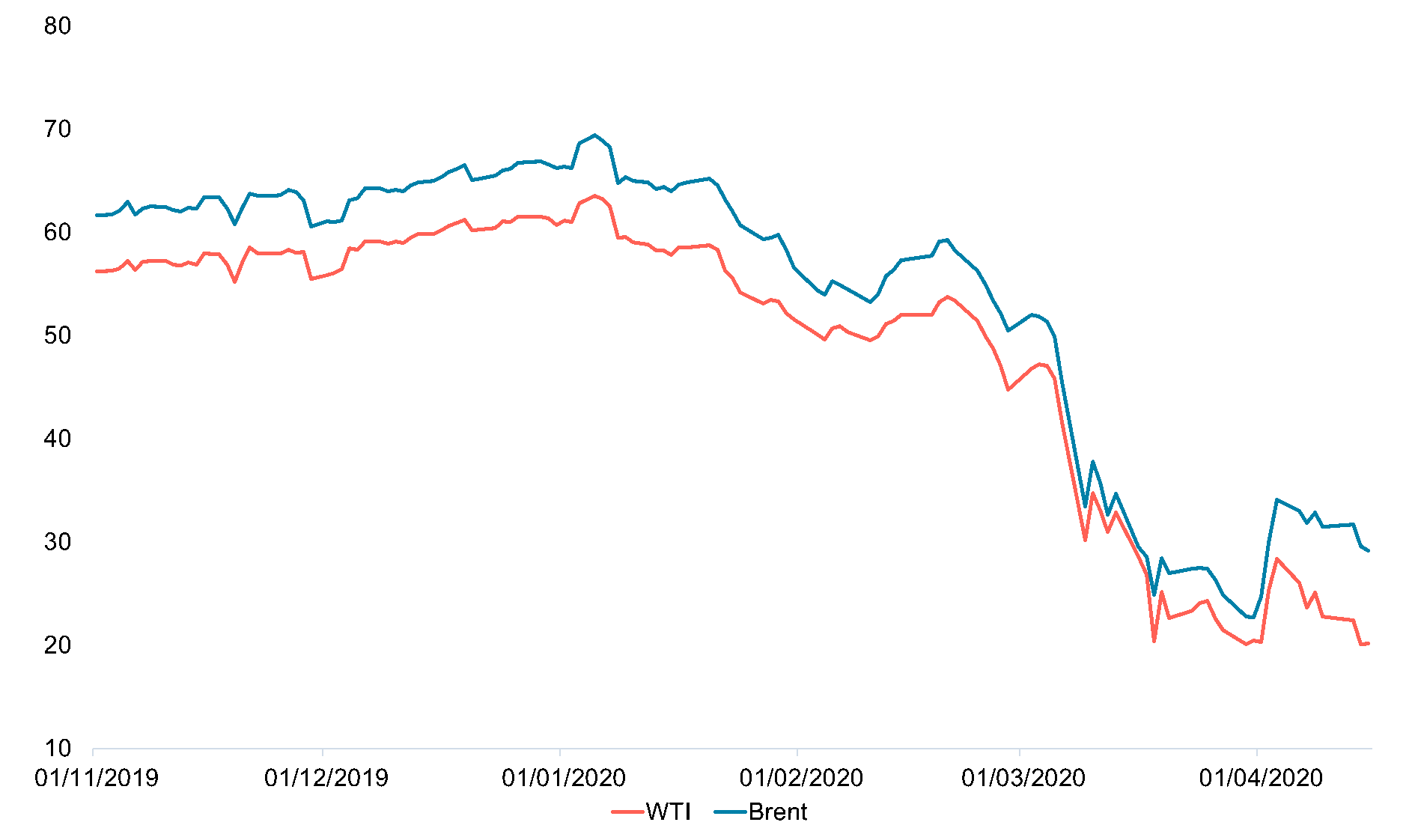 We proxy oil export volume through oil production and share of oil exports in oil production, where available. For oil production, we use as our baseline the pre-crisis 2020 forecast, given by either the national budget assumption, the latest IMF country report, or if unavailable, the latest reported oil production figure. We assume production is unchanged in response to the oil price shock so the loss of oil export revenues is given simply by the difference in price multiplied by volume. This assumption may, however, prove invalid now in light of the new OPEC+ production cuts, although a country-by-country breakdown of revised quotas or production targets is not yet available and it is too early to assess the degree of compliance. We note, however, that some producers under the OPEC+ agreement risk suffering from a combined price and volume shock to the extent that oil prices do not respond as intended.

There are two other things to note in our analysis. First, we only look at the impact through gross oil exports rather than through net oil exports, so we might therefore overstate the current account impact for countries that also import oil. The oil price shock reduces the oil import bill as well as reducing oil export revenues. Second, we do not model the impact on gas exports here, which could also be significant in some cases (eg in our sample Kazakhstan, Trinidad and Indonesia are significant gas producers too). However, the nature of gas pricing makes this assessment harder to do. These factors are particularly relevant to Indonesia, an energy exporter, because of its gas exports but a net oil importer despite being an oil exporter.

For the current level of international reserves, we take the latest available pre-crisis level of reserves from national central banks, Haver or IMF reports where available.

Results – Angola and Ecuador are the most vulnerable

Countries that are more dependent on oil exports (major oil producers and with greater share of oil in total exports) and/or with relatively low levels of reserves to start with are – obviously – the most vulnerable to a protracted period of low oil prices, and hence loss of oil export revenues; while the low level of reserves may limit their ability to respond appropriately, or quickly enough, to the shock. Our results are summarised in Figure 1 and shown in detail in Table 1 (see full report).

Nigeria, Iraq, Bahrain, Oman and CEMAC countries (Gabon and Republic of Congo, especially) are also vulnerable. For Nigeria, Iraq, and Oman the projected fall in oil exports from the oil price shock is about half of their respective reserves, while it is even higher for Bahrain (about two-thirds). In the CEMAC region, while the fall in oil exports for individual countries looks modest relative to the region’s total (pooled) reserves, the cumulative export loss is about two-thirds of total reserves. Hence, the cumulative impact from individual countries could have implications for macroeconomic stability of the region as a whole, and the CFA currency peg; a re-run of the 2014-2016 oil price shock which forced CEMAC members, under international pressure, to adopt IMF programmes in order to help restore regional stability. In particular, at a country level, the projected fall in oil exports for Gabon and Republic of Congo may exceed their imputed reserves (their share of the region’s reserves).

At the other end of the scale, the projected current account impact relative to reserves is negligible for Indonesia and relatively minor for Cameroon, Egypt and Colombia. The impact on Trinidad is also minor although we think that is because we ignore the impact on gas exports. 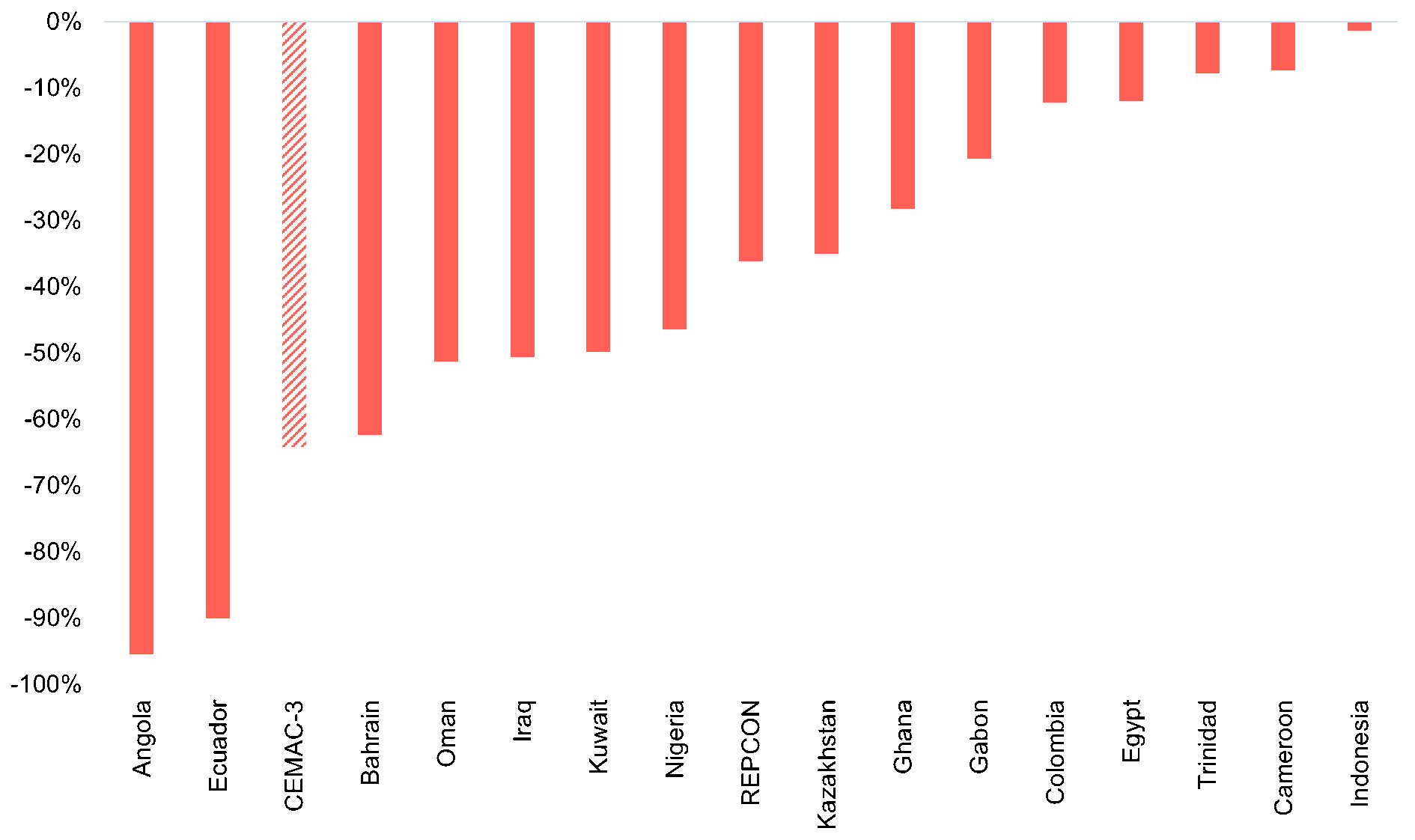 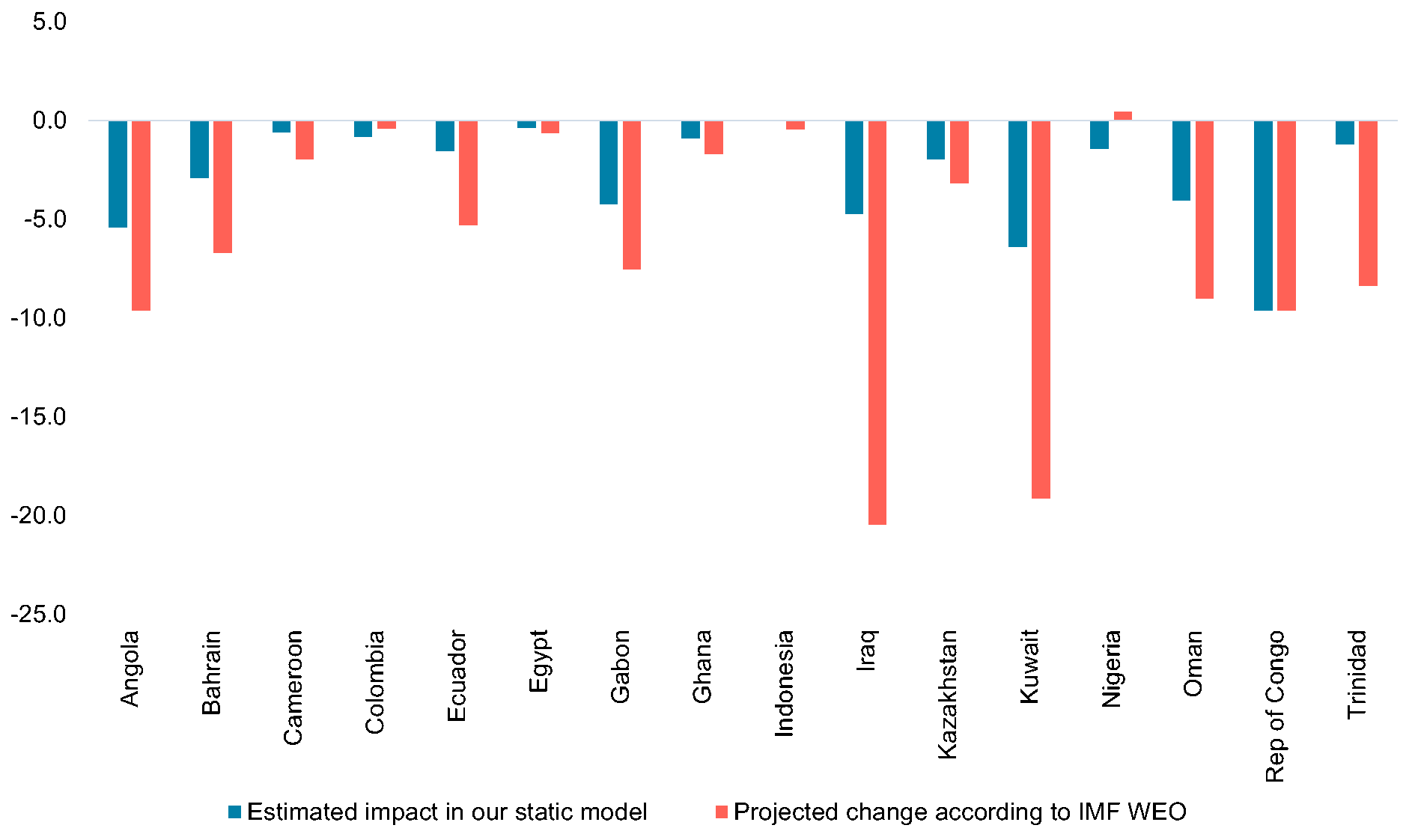 Source: Tellimer Research, IMF WEO (April 2020). Blue bar is our estimated current account impact as a share of IMF projected 2020 US$ GDP. Red bar is difference in current account balance as a % of GDP between 2019 and 2020 according to latest WEO forecasts.

This static approach may, however, overstate the actual impact, as we do not account for offsetting effects that might help to mitigate the loss of export revenues (either through active policy decisions or elsewhere, eg through volume effects, reduced imports, or other balance of payments flows). In particular, there are a number of policy choices to ameliorate an expected current account deterioration:

The market reaction since the oil price slump in early March has been broadly consistent with our findings. We plot the projected current account impact relative to reserves (y-axis) against bond spreads (x-axis) – see Figure 2. This reveals a clear (positive) relationship between the two variables – the more vulnerable countries on our measure have higher spreads (country risk). However, we should caution that other factors will also affect spreads, including other economic and political fundamentals, and trading liquidity.

Countries above/right of the fitted trend line may be judged as cheap while countries below/left of the fitted line may be expensive. The chart suggests that potentially, Angola is expensive as might be Kuwait, Bahrain and Kazakhstan. However, the degree of vulnerability may be overstated in the case of Kuwait and Kazakhstan, given their high savings, and in the case of Bahrain, given its external donor support umbrella (although that is conditional on the support continuing); on an adjusted basis, the current account impact relative to savings for Kuwait would be -3% and for Kazakhstan -12%, which might instead imply they are cheap. Conversely, Ghana may be cheap (although there are other factors that might explain its high spread).

Meanwhile, while the individual CEMAC-3 countries may be above the line, we caution that this understates their vulnerability at a wider regional level, which may put Cameroon at more risk given current prices (although Cameroon should be less badly hit than other members), and Gabon. 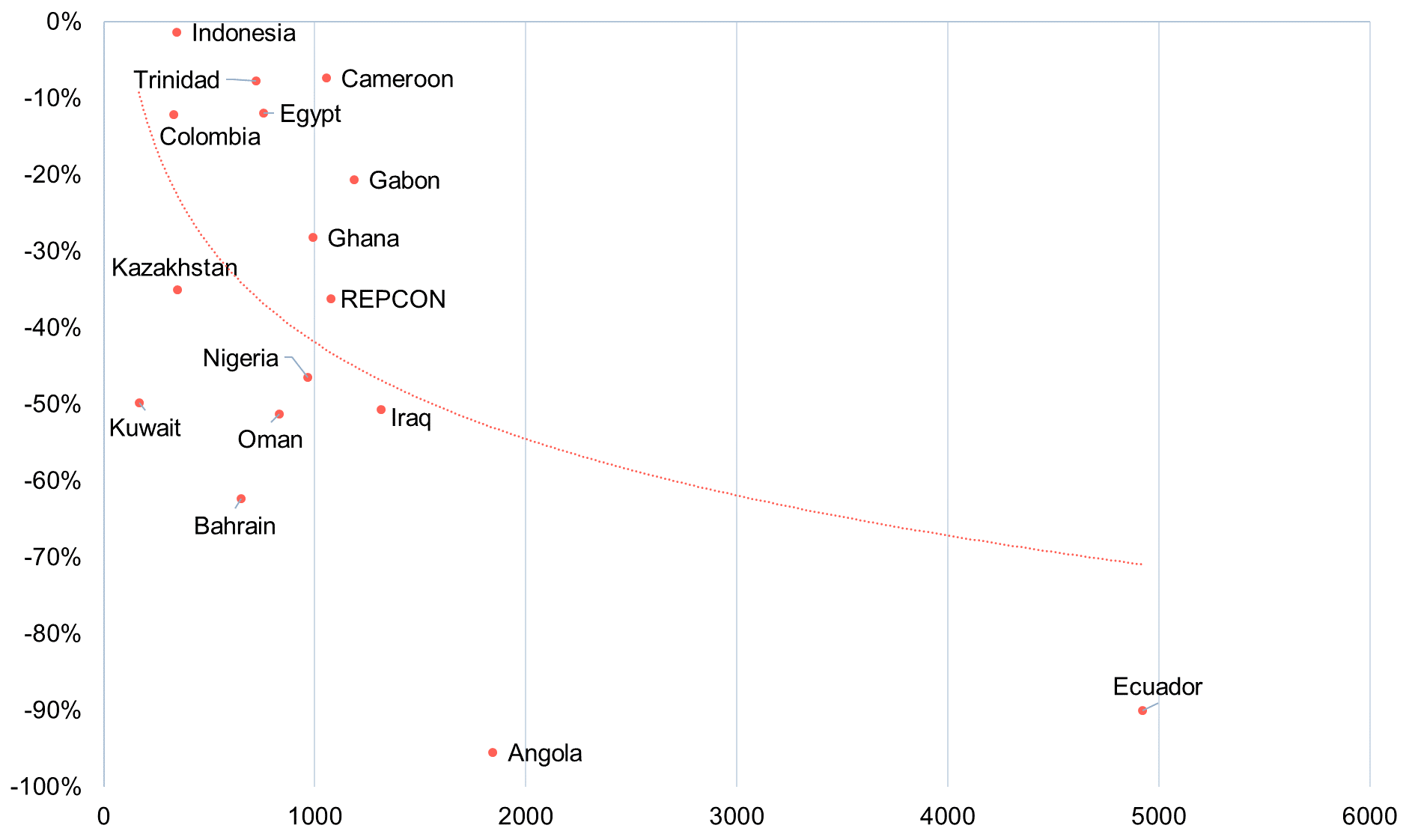 Source: Tellimer Research, Haver, Exotix/FC Stone. Projected current account impact (as share of reserves) on y-axis. Bond spreads on x-axis. Spreads given by EMBIGD constituent from Haver, except REPCAM and REPCON, which are based on indicative mid-price, as of cob 14 April. 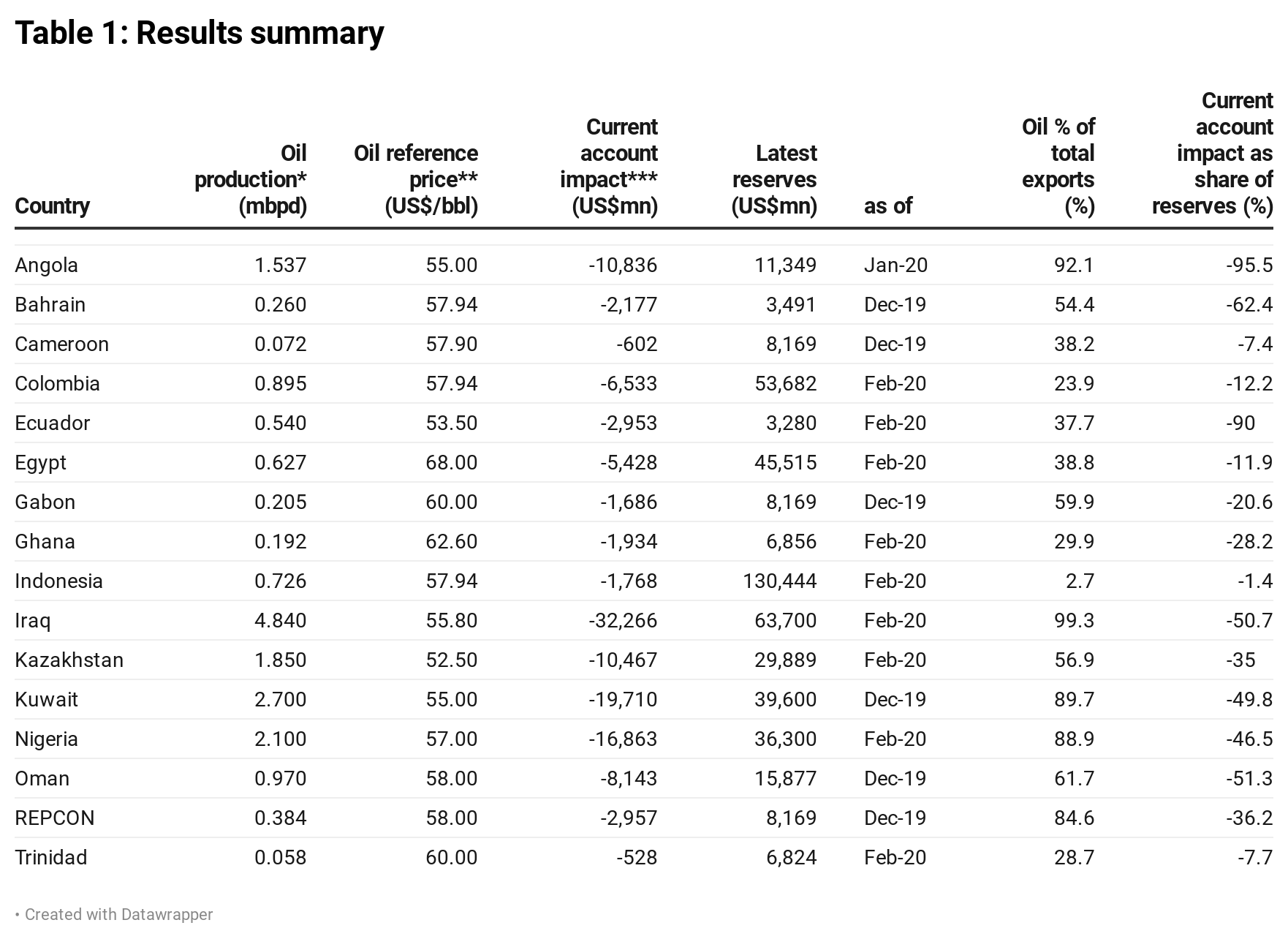