Yesterday the USD found more support off the back of a steady rise in US Treasuries that are now starting to spook some riskier investment destinations. A continued rise in US Treasuries will likely keep bond outflows from emerging markets alive and will cause many to rotate back towards the USD. If sustained, it could also eventually translate into some concern in equity markets that the rallies will not be sustained amid rising interest rates, all of which could trigger a further rotation to the USD. For now, it appears that the USD is taking direction from US, Treasuries, as are other investment markets.

The price of gold is currently below the $1750.00/oz handle as we head into the start of the EU trading session with the yellow metal capped by a stronger dollar and rising US Treasury yields. The benchmark 10yr US Treasury rose to a 3 month high overnight which tactically supports gold bears as gold itself has no yield. This came as Fed officials spoke around the timing of the taper yesterday and the market prepared for the next round of Fed chatter today when Fed Chairman Jerome Powell is due to testify before congress on the Fed’s response to the COVID-19 pandemic. That said, there is a safe haven bid out there as a result of the Chinese Evergrande debt crisis even though the Chinese central bank vowed to protect consumers exposed to the housing market.

Ghana: The Bank of Ghana yesterday kept its benchmark interest rate unchanged at 13.5% for a second straight meeting as policymakers opted to shore up an economy that is recovering at a slower pace than expected and as inflation is seen remaining within the target range. Governor Addison was quoted as saying, “we thought that the risk from both ends are balanced,” referring to the risks of slower growth and higher inflation. Inflation, which accelerated for a third straight month in August to near the top end of the central bank’s 6% to 10% target range, has been driven by higher food prices. Those prices are expected to abate with the onset of the harvest season. According to Addison, inflation is seen remaining within the medium target band but closer to the upper limit in the absence of further unexpected shock. That said, the Governor said that the BoG stands ready to respond appropriately “if we sense that there’s a higher risk of inflation going outside the target band.”

Kenya: The Central Bank of Kenya is set to decide on its policy rate today. Expectations are that policymakers will keep the central bank rate unchanged for a 10th straight meeting as the coronavirus pandemic continues to weigh on the business environment after the economy contracted last year for the first time in 29 years. Although inflation quickened to an 18-month high in August, it remains within the target range, giving the committee room to continue supporting the economy for now.

Morocco: Bank Al-Maghrib is today also expected to leave interest rates at a record low at the first meeting since a business-friendly political party closely aligned with King Mohammed VI won parliamentary elections. A slowdown in inflation and last month’s allocation of new IMF reserves bolstered the kingdom’s foreign-currency buffers should give the bank room to sidestep immediate concerns about imported inflation until a new government agrees to a budget bill.

Kenya: A high court judge yesterday temporarily suspended a tax that could raise the fuel price. The inflation adjustment of almost 5% on excise duties on petroleum products was suspended pending a decision on a petition against the move. The adjustment was set to become effective on October 1 and could have further raised fuel prices already at the highest in a decade.

Ghana: Data from the Bank of Ghana (BoG) showed that gross reserves rose to $11.4bn in August from $11.03bn in the month prior. The level of reserves equates to 5.2 months of import cover. According to the BoG, the strong reserves build-up over the review period provided some buffer to the local currency, which came under some demand pressures from commerce, manufacturing, and energy sectors as economic activity picked up in Q3.

Kenya: Provisional current account data showed that Kenya’s deficit was 5.5% of GDP in the 12 months to July 2021 compared to 5.0% of GDP in the 12 months to July 2020. According to the CBK, the wider deficit was due to lower service receipts as well as an improvement in imports, which more than offset increased receipts from agricultural export remittances. A persisting current account deficit is likely to place further pressure on the Kenyan Shilling, which remains on the defensive both on a month-to-date and year-to-date basis against the USD.

Tanzania: The Bank of Tanzania reported that the value of the country’s export of goods and services decreased by $405.3mn to $9bn in July, compared to the same period a year earlier. The decline was a result of the coronavirus pandemic, according to the BOT. The coronavirus pandemic led to the sharpest collapse in the value of exports and trade in Africa, and Tanzania in particular, due to the introduction of containment measures in many EU countries, which is the most important destination for African exports. The sharp decrease was mainly registered in the travel receipts, according to the report. However, there was an increase in the exports of gold, manufactured goods, and horticulture.

International oil prices have continued to rise at the start of the new week, with Brent and WTI prices surging to multi-year highs as inventories continue to decline and a rally in natural gas prices looks set to drive up demand for crude. Note that the oil sector is the largest source of foreign currency inflows and government revenue.

As such, the rally in international oil prices has provided a boost for the Angolan Kwanza (AOA). The AOA extended its gains against the USD yesterday with currency appreciating 1.00% against the USD to end the session at a year-to-date low of 608.68. 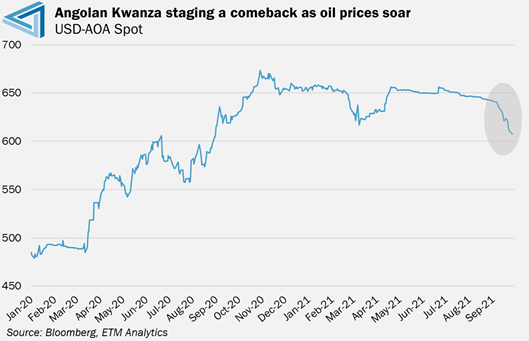 On a month-to-date basis, the AOA has racked up gains of around 5.72% against the USD, making it the best performing African currency on the month. Note that these gains are 10.4 times higher than that of the next best-performing currency, the Ugandan Shilling, at +0.55%.

While the firmer oil prices have contributed to the AOA’s recovery, factors including the massive rate hike by the Bank of Angola, the positive rating action from Moody's and improving reserves levels have also supported the AOA. Recall that in July, policymakers in Angola raised the benchmark rate by a massive 450bps to a record high of 20.0% in an attempt to curb inflation. Meanwhile, data from the central bank of Angola showed that net reserves rose to a 10-month high of $9.90bn in August from a downwardly revised $8.24bn in July.

The bullish bias in the AOA remains entrenched with currency up 7% on a year-to-date basis against the USD. Moreover, the AOA is the third-best performing currency behind the Zambia Kwacha (+27%) and Mozambiquan metical (+16.70%). Given the current backdrop, we expect the AOA remain on the front foot in the near term.

Fixed Income: Eurobonds of African oil-producing nations under pressure despite the sharp rise in oil prices

The rally in oil has persisted this morning with the international oil benchmark, the front month Brent contract, sustaining a break above the psychologically important $80/bbl mark, a level not seen in almost three years. Despite the significant rise in international oil prices, which historically has supported assets of African oil-producing nations, Angolan, Ghanaian and Nigerian Eurobonds have sold off in recent days as a combination of mounting inflation fears and deterioration in global risk sentiment weigh. 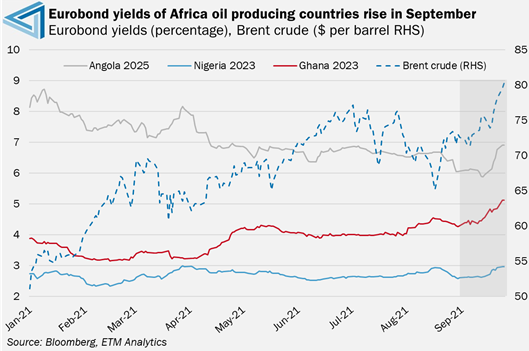 Since the start of the month, Angola’s 2025 Eurobond yield has surged almost 70bps to more than a 2-month high of 6.91%. Meanwhile, Ghana and Nigeria’s 2023 Eurobond yields have risen by 77bps and 31bps on a month-to-date basis to sit at 5.12% and 2.97%. Although the marked rally in international oil prices should provide a boost to fiscal revenue and foreign currency inflows to the three countries mentioned above, investors are clearly more concerned about the implications of global monetary policy tightening and the potential for the Evergrande saga to hit the broader Chinese economy.

Going forward, while we expect oil prices to remain elevated in the coming weeks, given the sharp rise in inflation expectations the world over against the backdrop of dampened global risk sentiment, we expect the bearish bias in Eurobonds of African oil-producing countries to persist. Given that fiscal dynamics in Ghana and Angola are more fragile than in Nigeria, we expect Nigerian bonds to be more resilient than its two African oil-producing peers to the deterioration in global conditions. 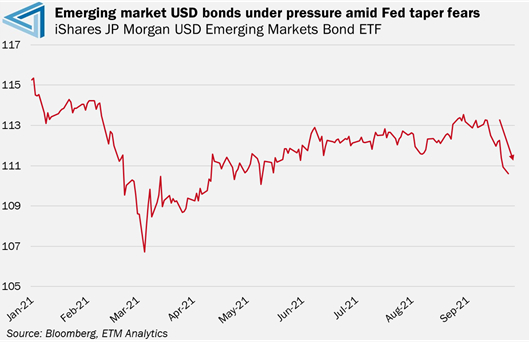 The losses come after the Fed scaled up its hawkish rhetoric. Recall that the Fed signalled in its statement that it plans to begin tapering monetary stimulus by winding up its bond repurchasing program and eventually start hiking interest rates. Also weighing on risk appetite last week were concerns amongst the international investment community that Evergrande's liquidity crisis could lead to a domino effect on other major Chinese developers and the broader economy.