Offshoring to accelerate post-Covid: Our new index shows the EMs set to benefit

Prior to the recent resurgence in Covid-19 infections, banks were busily making announcements about bringing staff back to the office. Heady stuff, but the most telling parts of these announcements went unsaid: that the back office broadly is not being asked to come back to the office. While staff in compliance, IT and other back office functions may be dreaming of moving to Suffolk County (either the East of England or the East of Long Island version), the reality is that now that banks have realised that they don’t need their back office staff in the office, moving them to cheaper locations is the logical next step.

Indeed, the experience of widespread working from home just accelerates the pre-Covid trend towards opening offices overseas and offshoring. In one recent example, a South African CTO decided that if the bulk of his technology team was working effectively from home, there was no reason not to replace them with cheaper Capetonian techies, leaving only senior management and desktop support in London.

Index of attractiveness for offshoring

This trend is bad news for those whose jobs will be offshored, but good news for the countries that will benefit. As such, I’ve assembled an index of attractiveness for offshoring to identify which countries appear best placed to receive these new jobs. Importantly, this next phase of offshoring will be different. Outsourcing, in which entire business processes are transferred to contractors, has run its course. The roles that remain to be offshored are more senior, will report directly into the management structure of the onshore business, and will need to remain directly employed staff. The firm in my example above didn’t contract with a South African IT company, which would have been too complex and inflexible, but rather opened its own local subsidiary to employ staff who would work remotely with their London counterparts every day.

In order to win this business, wages need to be low enough to make offshoring worthwhile. To be part of the onshore firms reporting line, offshore staff need strong foreign language skills and a quality tertiary education. Cultural similarity also helps, so we measure the number of migrants that each country sends to high income economies.

If the human capital and cultural factors are in place, the next question is whether the country can support offshoring. Does it have adequate infrastructure, especially broadband and electricity supply, for office work? Is it easy for foreign investors to set up a business, and is the quality of public administration generally strong?

Combining all of this into an index, we get a somewhat surprising picture of the developing world: 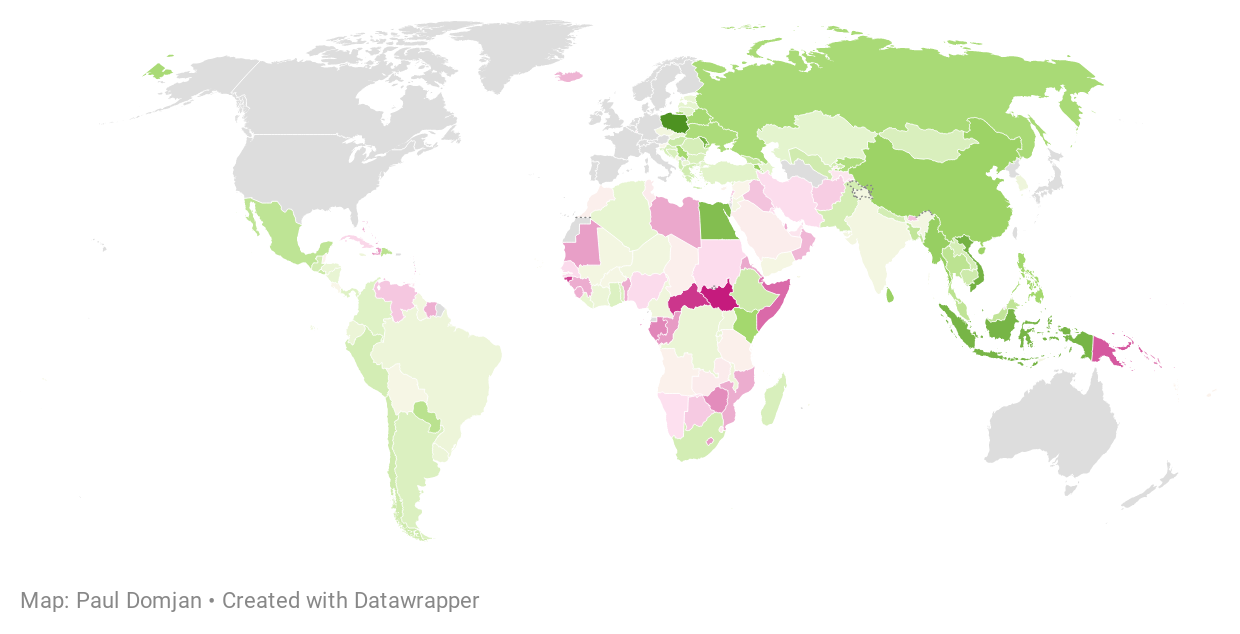 Many winners; one surprising loser

India appears the weakest of the BRICS, and indeed the weakest of the large emerging markets. India is the godfather of business process outsourcing, and it benefits from strong economic connections facilitated by an enormous diaspora in high income economies. However, when it comes to setting up local subsidiaries, the data confirms what I learned from my own personal experience of having an Indian subsidiary: infrastructure problems and red tape mean that it just isn’t worth it.

The US is also a loser. European countries benefit from a large number of attractive offshoring destinations in similar time zones, and the strongest scoring countries are all in the eastern hemisphere. Paraguay, the Dominican Republic and Mexico are the best bets for US companies wanting to offshore to Latin America. Although some firms have offshored from New York to Costa Rica, including Refinitiv, Costa Rica is let down by high wages, electricity problems and red tape.

To assess attractiveness for offshoring, I’ve assembled an index to measures six factors using eight variables. Given their importance in offshoring decisions, professional wages are given twice the weight of the other factors. I’ve used percentile ranks to transform the data to a common scale. The index value is the weighted average of all rescaled data available for each individual country. Not all data is available for all countries, and I have ignored missing data rather than attempt to impute a value. Only countries where data is available for four or more of the eight metrics are assigned an index score. While I have not computed the index for developed markets, I have included their data for the individual metrics for the sake of comparison.

Figure 2: The structure of the offshoring attractiveness index

1.       Professional wages need to be relatively low for offshoring to be worth it. A stronger skills base can help to justify higher wages. Meanwhile, wage levels explain why countries like Iceland and South Korea, that may be classed as emerging markets, but are already high-income economies, are not attractive for offshoring. Wage differences also drive differences in competitiveness in some regions, particularly among the new EU members. I use International Labour Organization data for US dollar wages in financial activities for the most recently available year.[1] 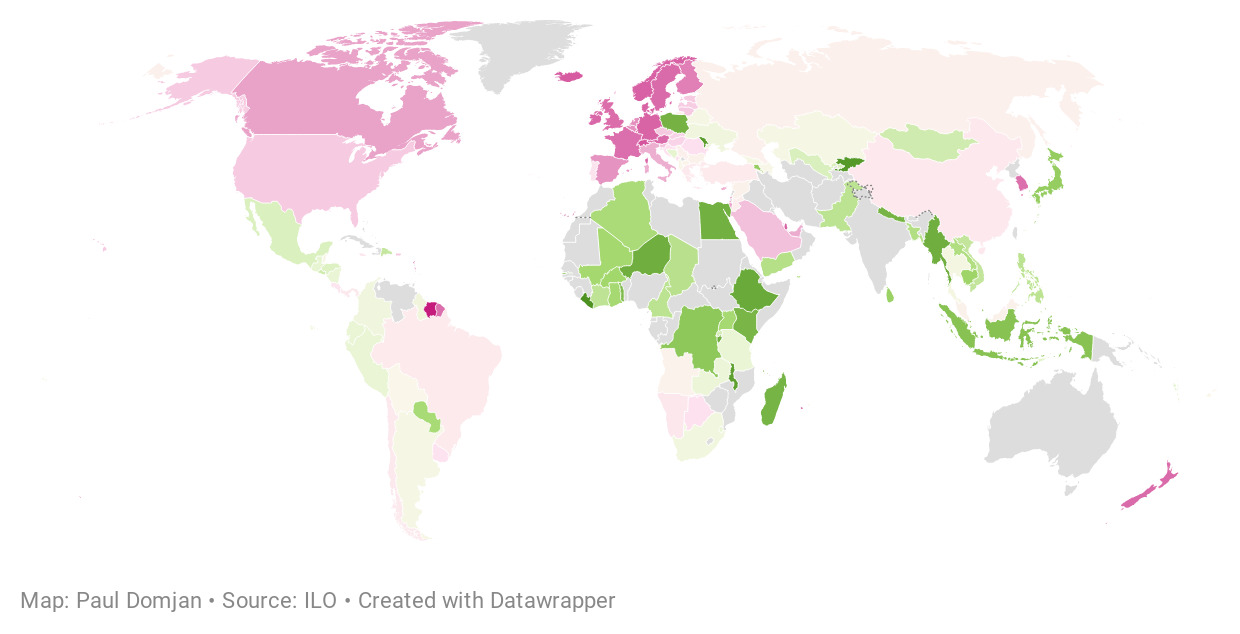 2.       A large diaspora in high income countries helps to connect developing countries and facilitate business. Cultural affinity can help build strong working relationships between the existing onshore team and the new offshore team. I use data from the UN’s Population Division on the stock of international migrants by destination and country of origin. 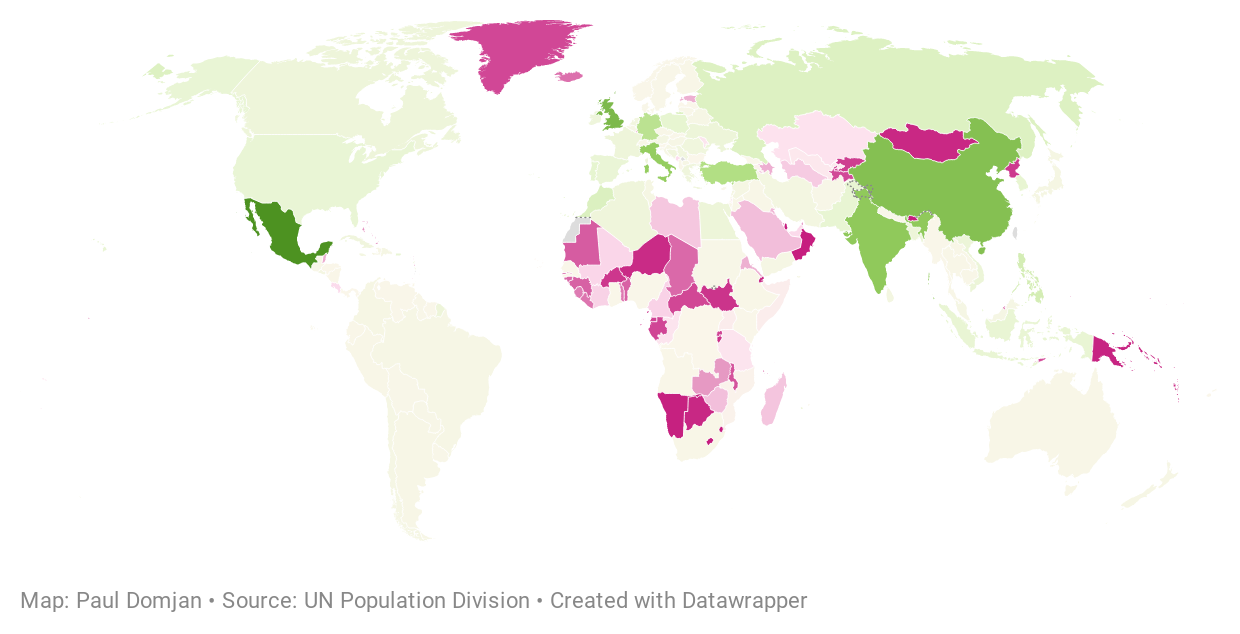 3.       A highly educated workforce is necessary for offshoring, where jobs are likely to be relatively skilled and variable. Data from QS assesses the quality of the higher education system. 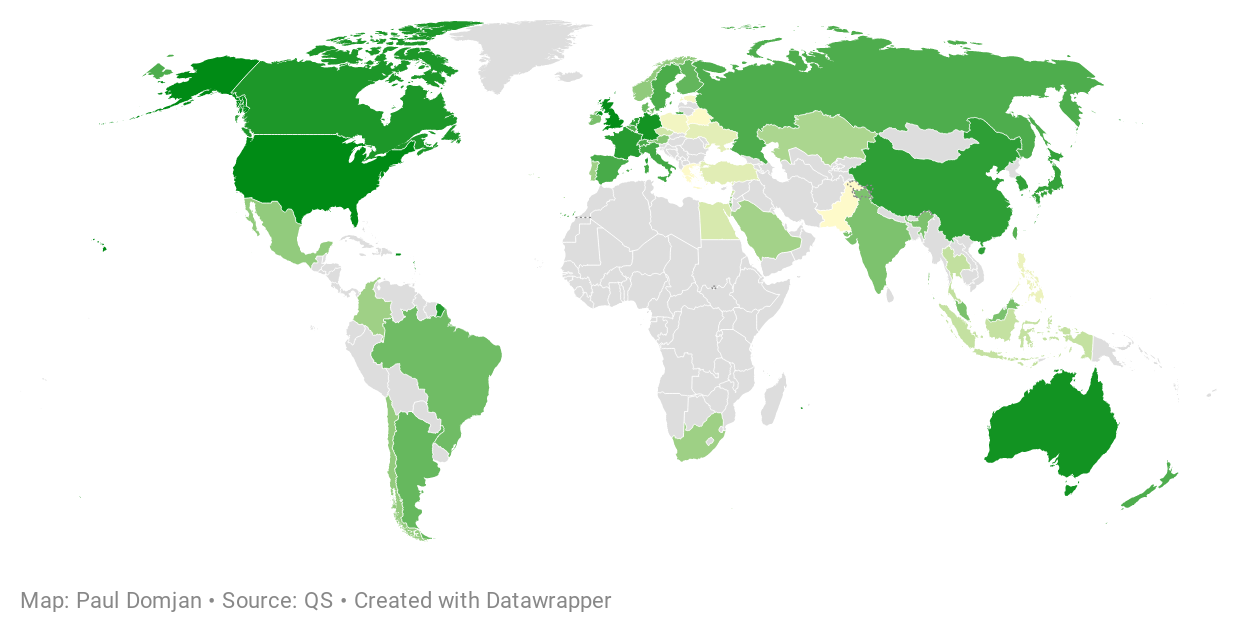 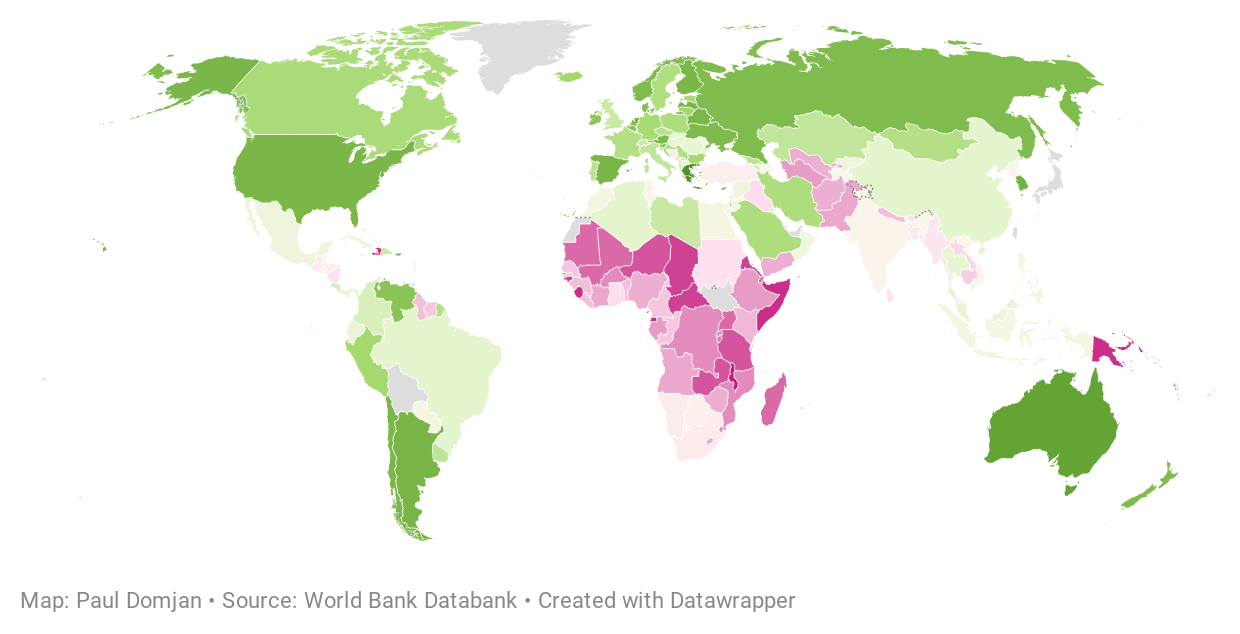 Finally, I look at English language ability, as measured by average scores of more than 2.3mn people who took the EF Standard English Test or one of EF’s English placement test. Because the test is voluntary and available online, it captures the English language ability of those who are actively seeking to use English professionally, not the broader population. Given that this is likely to be the workforce an offshoring operation would target, it should provide a good indication of language ability of prospective employees.

Figure 7: English proficiency as measured by the EF Standard English Test, only countries with more than 400 test-takers in 2018 are included (green = better; purple = worse) 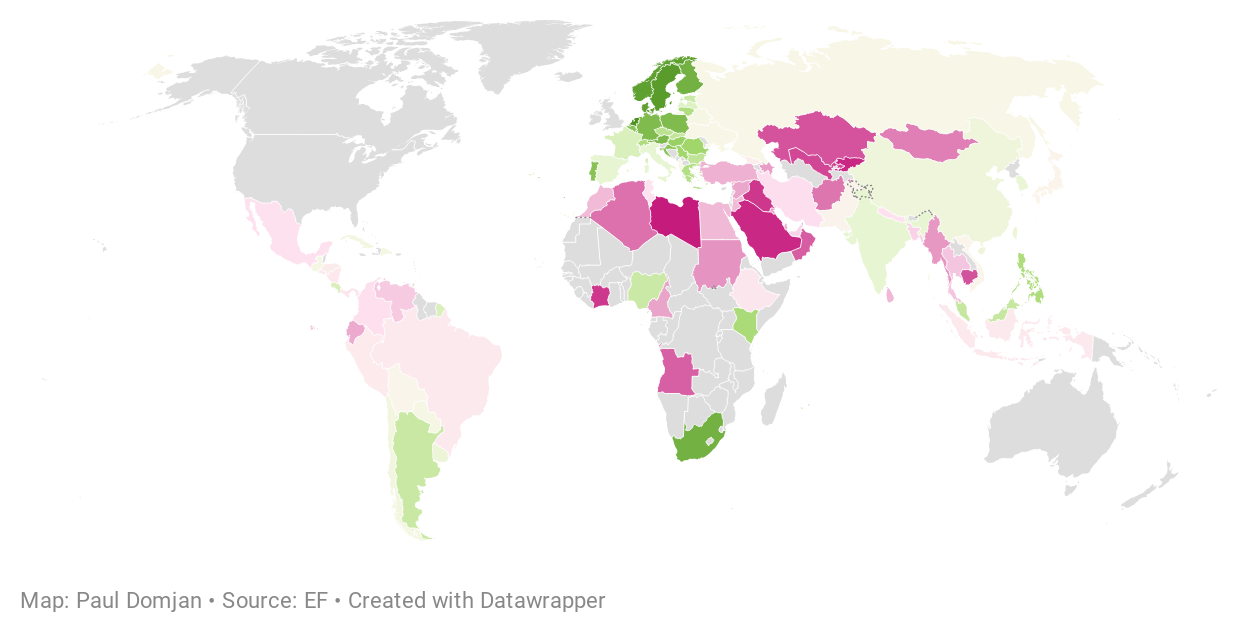 4.       Infrastructure is key for working remotely, particularly fast broadband and reliable electricity. I use fixed broadband speed data from Speedtest Intelligence and data on electricity reliability from the World Bank’s Enterprise Surveys. 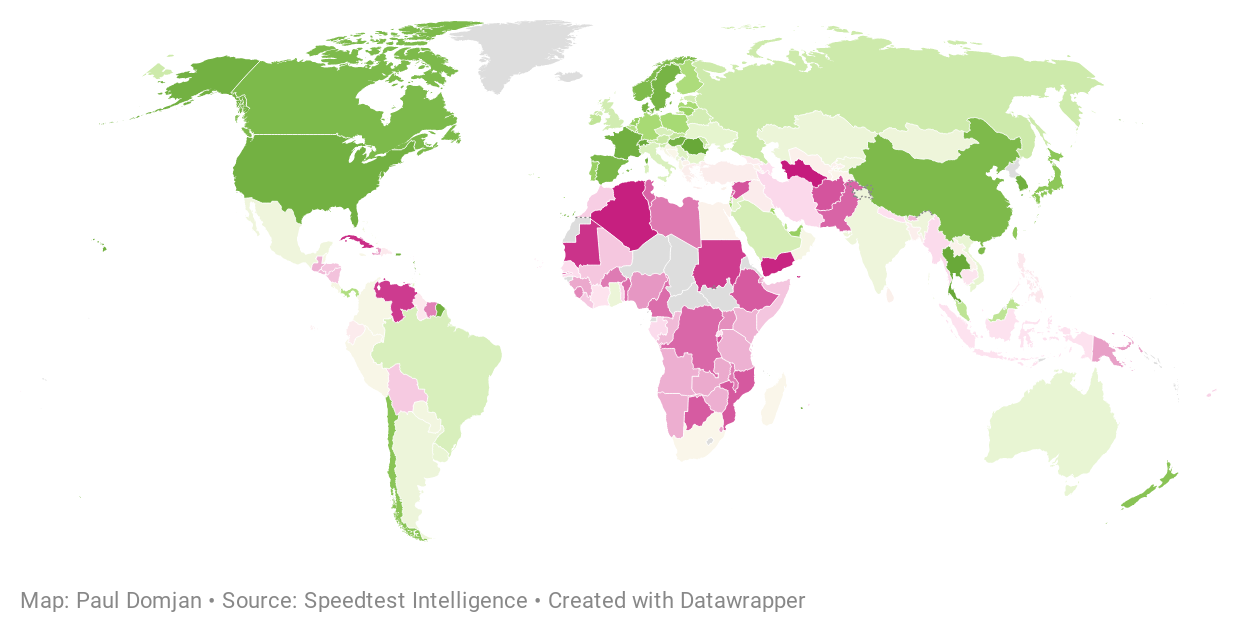 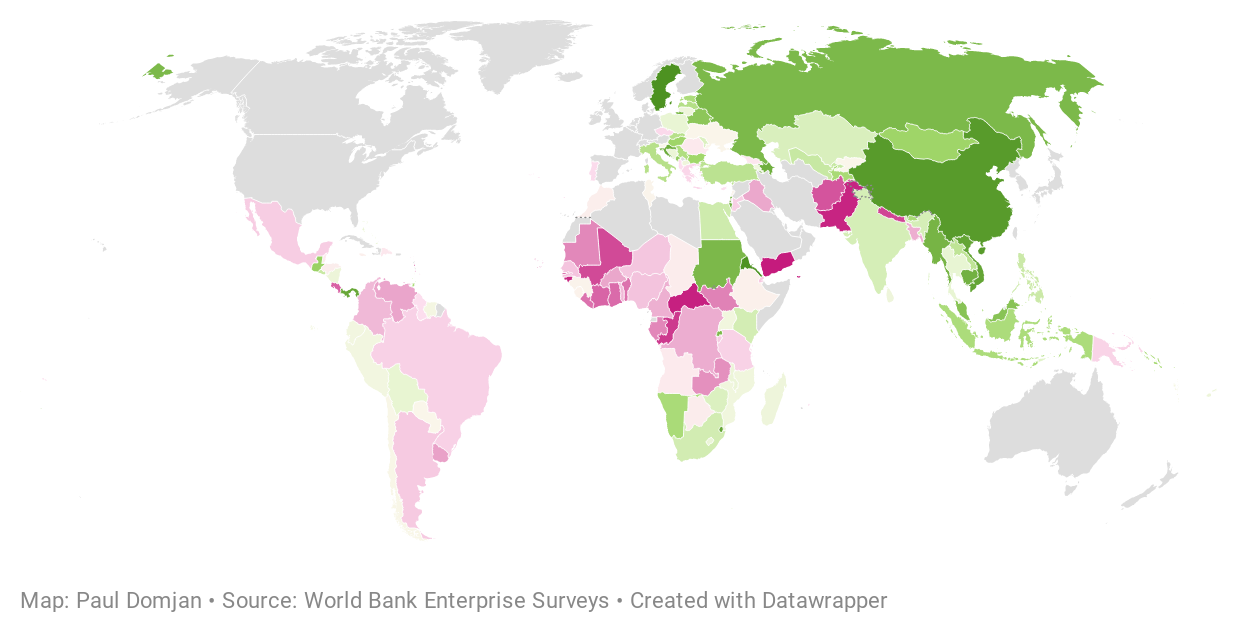 5.       Red tape can kill offshoring even faster than other types of business. Especially in smaller firms, executives in the home country will need to establish and run the offshore subsidiary remotely, which simply is not possible with obstructive red tape. I estimate this by including the ease of starting a business, as measured by the World Bank’s Doing Business project, and an assessment of the quality of public sector management from the World Bank’s Country Policy and Institutional Assessment (CPIA) project. Although CPIA only covers a subset of less developed countries, it still provides a starting point for analysis and shows that even poorer countries, like Ethiopia, Georgia and Rwanda, can achieve higher-quality policy making. 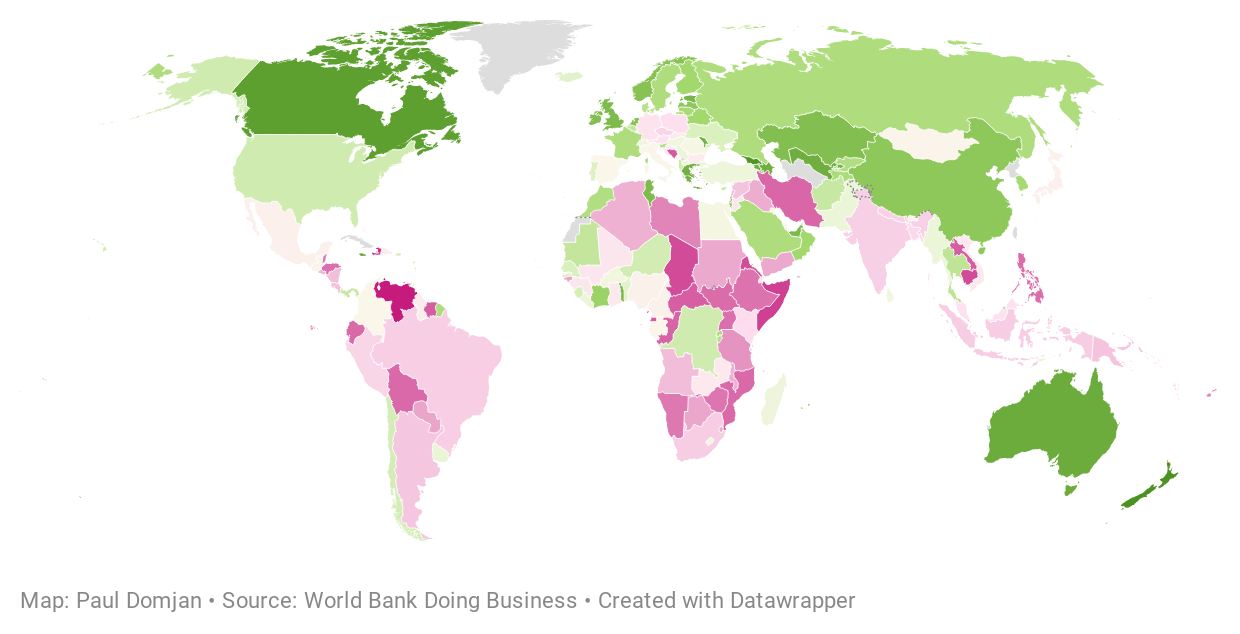 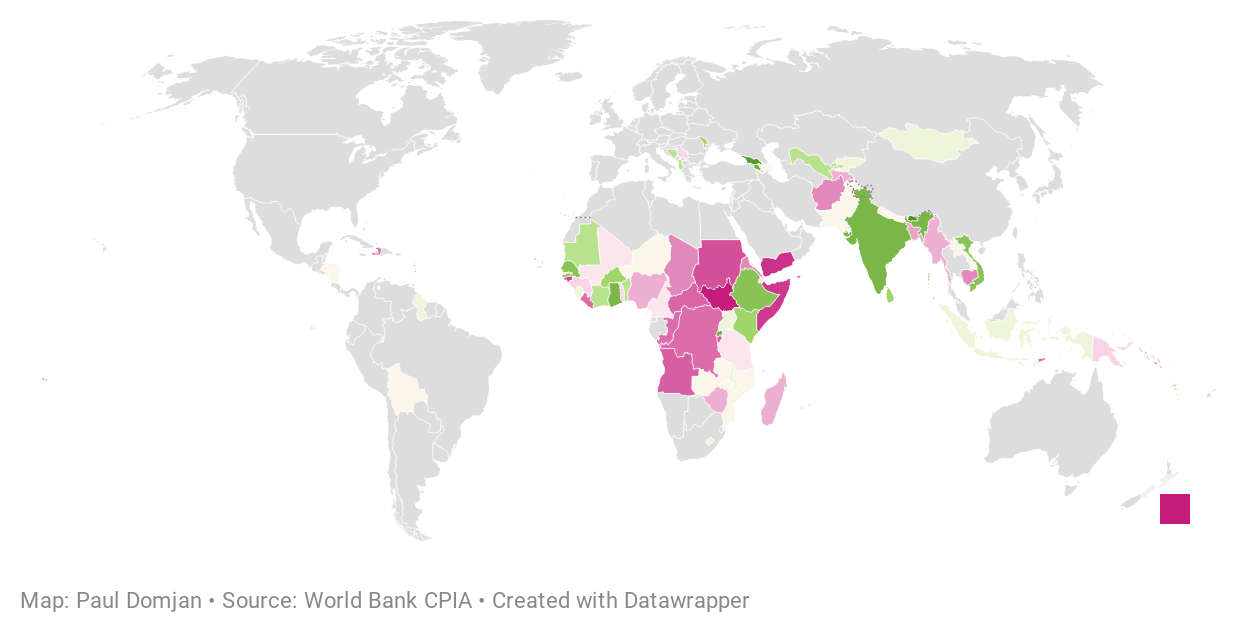 [2] Values above 100% mean that the inclusion of students from outside of the typical tertiary education age cohort, typically mature students, means that the total number of students enrolled is greater than the age cohort.