3 May 2022
Published by
ETM Analytics

Many investors will be returning to their desks today following the extended break over the weekend due to the MayDay holidays. The energy markets are in focus ahead of the all important FOMC rate decision tomorrow evening. Oil had a mixed session yesterday, with the front-month Brent crude contract ending the day 1.60% lower while WTI managed to close 0.5% higher in what was a session of lower liquidity owing to several major markets being shut for the Labour Day holiday. Brent continues to trade around its 50DMA near $107.80 as traders digest still robust demand for fuels and tighter supply with the prospects of a slowing Chinese economy and a possible ban on Russian crude by year end.

Tight supply and concerns over a Russian crude ban have kept demand for physical barrels elevated. Brent’s prompt timespread, as a result, has widened out to around $1.56 per barrel this morning. This compares to a spread of $1.09 seen last week, highlighting that the market has turned a bit more bullish, which should continue to prop up prices. Brent, therefore, should remain well above $100 per barrel over the near term unless we get a significant demand shock.

Angola: Economic Coordination Minister Manuel Nunes Junior has said that Angola's first initial public offering will test investor appetite before the country lists more assets this year. The country's biggest lender Banco BAI will list 10% of its shares that are currently controlled by the government on June 9. According to Nunes Junior, the government plans to sell stakes in at least three other companies through the stock market this year. According to Nunes, firms in the financial, oil, and construction sectors have also shown interest in listing on the stock market. The share sales would form part of Angola's most extensive privatisation program, with about 195 assets earmarked for disposal, and aims to attract overseas investors to diversify the oil-focused economy.

Kenya: To assist workers who have seen household budgets squeezed by inflation, particularly for basic foodstuffs, Kenya has raised the minimum wage by 12%. According to President Kenyatta, the wage increase was effective immediately and would help protect people’s spending power. Kenyatta further said that “ there is a compelling case to review the minimum wages to cushion our workers against further erosion of their purchasing power, while also guaranteeing the competitiveness of our economy.” Inflationary pressures have been buoyant in Kenya over the last few months as the spillover from the Ukraine war is driving up the prices of vegetable oils, wheat, fertiliser, and fuel.

Mauritius: To contain prices and restore the purchasing power of consumers, Mauritius, a net food importer, will increase subsidies on seven categories of essential commodities. According to the Ministry of Commerce and Consumer protection, the commodities include cheese, margarine, and milk powder. Meanwhile, subsidies on edible oil will be raised by 36% to 38 rupees per litre. In March, Mauritius inflation accelerated for the sixth straight month on the back of rising costs to ship goods from distant suppliers.

Nigeria: To raise funds to help narrow its widening budget deficit, Nigeria is considering a bond sale targeted at its citizens overseas. According to an official from the Debt Management Office, the government may sell the debt after it repays $300mn of diaspora bonds maturing in June. The official was quoted as saying, "we are doing both an analysis of recent research report on diaspora remittances and reviewing offshore regulations for changes that may be supportive of offering products to retail investors." Note that Nigeria's need for borrowing has increased following additional spending to help the economy recover from the impact of the coronavirus pandemic and Russia's war on Ukraine.

Uganda: Headline inflation in Uganda accelerated to 4.9% y/y in April from 3.7% y/y in March, marking the fastest pace of price growth in the economy since September 2017. On a month-on-month basis, consumer prices rose by 1.4%. A breakdown of the data showed that food and non-alcoholic beverage inflation came in at 6.9% versus 4.4% in March. Meanwhile, energy fuel and utilities inflation rose to 11.2% in April from 8.5% in March. At its meeting last month, the Bank of Uganda forecast inflation to rise above its medium-term target of 5% and is therefore likely to wait and see if the increase in inflation has had any knock-on effects before considering policy tightening.

Zambia: In a move to develop battery industries, Zambia and the Democratic Republic of Congo, which have around 70% of the world's cobalt resources and large deposits of copper, have agreed to tap the resources. The countries agreed to create a common governance framework battery council whose executive committee will include the two countries' heads of state. Under the agreement, the two sides will jointly explore minerals that are critical raw materials for battery manufacturing and give full play to their rich cobalt and lithium resources. Moreover, the industrial zones in the DRC and Zambia will be developed to support the initiative in Katanga and Copperbelt provinces, while the African Export-Import Bank will be the financing partner.

Forex: Ugandan Shilling rebounds at the start of Q2, but headwinds loom

The Ugandan Shilling has kicked off the new month on the front foot against the USD, supported by month-end inflows from offshore remittances and non-governmental organisations. The UGX has extended its gains from last month as the currency halted two consecutive months of losses (February and March) on the back of the war in Ukraine. In April, the UGX was ranked the fourth best-performing African currency. Only the Zambian Kwacha (+6.26%), Mauritian Rupee (+0.84%), and Liberian dollar (+0.99%) fared better. 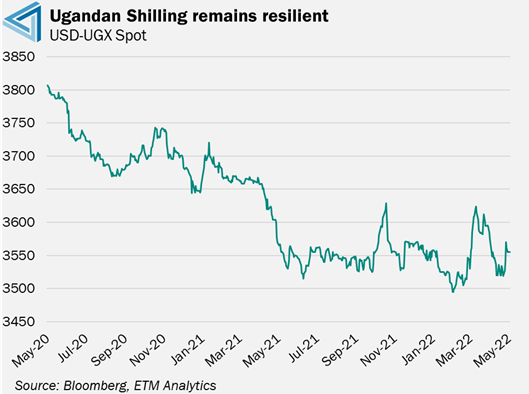 Moreover, the UGX remains East Africa's best-performing currency on a year-to-date basis and is ranked sixth in the broader Africa FX complex suggesting it has retained some resilience. Much of the UGX's resilience has stemmed from strong inflows from commodity exporters, especially coffee, remittance inflows, central bank intervention, a solid FX reserve position, and a still positive real interest rate.

While mounting headwinds, including a resurgent USD, increased demand for hard currency from the energy sector and food-importing firms, we expected the UGX to remain relatively resilient in the months ahead. That said, it is worth noting that tightening global financial conditions as the Federal Reserve embarks on an aggressive tightening cycle and a growing debt pile are some of the downside risks to the currency's resilience in the near-to-medium term.

The combination of the covid pandemic, spillover effects from the war in Ukraine and tightening global financial conditions have compounded fiscal pressures in Africa. Debt piles have ballooned over the past two years as government revenues fell amid the economic shock of the pandemic and as government expenditure shot through the roof. This comes against the backdrop of soaring international interest rates, which have pushed up debt servicing costs across the region. 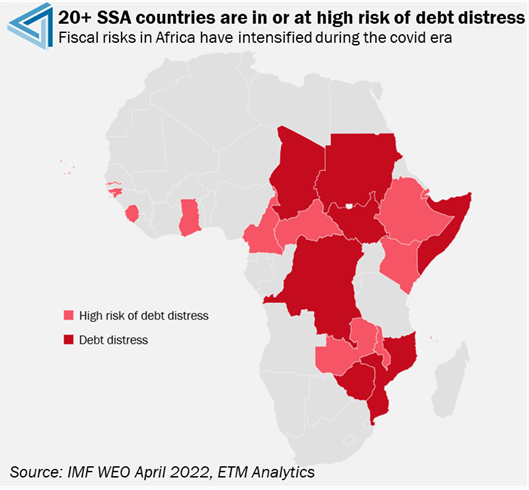 The IMF representative said that debt burdens in the region are elevated at a time when the social and development needs are very large. Unsustainable debt could lead to debt distress, where a country is unable to fulfil its financial debt obligations and resorts to debt restructuring. N’Diaye did not list the 20+ countries by name however the recently released World Economic Outlook revealed that eight countries in the world were in debt distress, thirty at high risk and twenty four at moderate risk, and seven countries at low risk of debt distress.

The IMF representative said the debt service as a ratio to revenue has been increasing, adding that the debt burden is very heavy at a time when the social and development needs are very large. N’Diaye said for countries in the region, the space to deal with the impact of the war in Ukraine or any other external shock is very limited, and there will be a need to make difficult choices. As mentioned in previous commentary, with global monetary conditions tightening at a rapid pace, investors are becoming very picky over where they are willing to invest funds. Therefore, a thorough study of a country's macroeconomic and fiscal dynamics is more important than ever.

Thinned out holiday trading exacerbated the ZAR's move yesterday to help it reach levels approaching 16.2000 in what was a wild trading session where the ZAR also traded below 15.8000. More normalised trading activity will return today, and a truer sense of relative value will be found. Exporters found value above 16.00/dlr last week and are bound to find the same again. The caveat this week will be the upcoming central bank decisions of the BoE and Fed and what they might reveal. 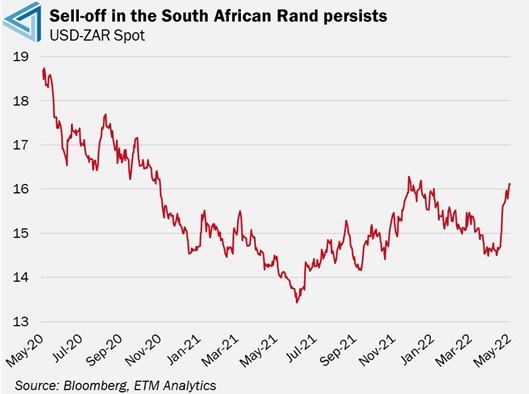 In both cases, the market is looking for tightening, although with the Fed, speculation revolves around whether the move will be a 25bp or a 50bp hike. US Treasury yields have been nudging higher in recent trading sessions. A 50bp rate hike is priced in and should not trouble markets much. The risk for traders long of USDs is that the Fed draws attention to growth developments internationally and turns less aggressive in its guidance. It needs to strike a balance between combating inflation while not cratering stock markets and growth expectations. The latter might assist with inflation but would be counter-productive.

So the week ahead holds the potential to be volatile once more. Although the ZAR might now be considered mildly undervalued, it can still swing between extremes. Levels approaching 16.2000 are now considered a technical level that might prove difficult to punch through and could contain the ZAR depreciation. The USD itself is now deemed to be overvalued against most currencies and will become progressively more vulnerable the longer it consolidates around current levels to allow investors to look through the current phase of monetary policy divergence between the US and other countries.

Also, the vulnerability of global stocks is not necessarily naturally supportive of the USD through promoting the USD's safe-haven status. Should equity markets come under further pressure, the one central bank outlook that investors would need to reconsider is that of the Federal Reserve. For now, the USD remains strong and supported, but there is a lot of tightening, and the risk/reward ratio is gradually turning asymmetrically against the USD.