Nigeria privatised its power sector in November 2013, but not much has improved since. 8% of power generation is lost due to underinvested transmission lines while another 17% due to poor distribution. 62% of the total 10.4 million registered customers do not have electricity meters and are hence apathetic to payments under estimated billing. This results in only 69% collections by the distribution companies (or DISCOs) leading to underpayments to the state-owned Nigerian Bulk Electricity Trading (NBET) — the sole purchaser of electricity produced in the country.

In turn, NBET only pays 33% to the power generation companies (or GENCOs) leaving the gap to be filled by the Central Bank of Nigeria (CBN). To date, the CBN has paid US$2.8bn under the Payment Assurance Facility (PAF) to the GENCOs while the Association of Power Generation Companies (APGC) in Nigeria claims that the NBET still owes at least US$2.7bn (0.7% of GDP) to the GENCOs.

The Meter Asset Providers (MAP) scheme, introduced by the Nigerian Electricity Regulatory Commission (NERC) in April 2018 to create a new metering industry and reduce losses, added a meagre 0.5mn metered customers until December 2019 as compared to 2.2mn new registered customers. The effectiveness (of the MAP scheme) is low since customers have to procure the meter from a third party at their own expense despite the cost of the meters being added to the current tariff.

In June 2020, the World Bank approved US$750mn credit for Nigeria's power sector to ensure electricity supply of 4,500MW by 2022 (or 20% higher than 2019) through stronger regulatory, policy and financing framework; additional objectives include enhanced accountability and achieving sustainable operations of the power sector, which are essential to attract private sector participation in future. This loan, however, is only a drop in the bucket for the sector that loses US$600mn annually to the aforementioned inefficiencies.

In response to the conditions set by the World Bank, the NERC increased electricity tariffs by as much as 100% on the highest band (effective from 1st September 2020). However, succumbing to the pressure from the labour unions, the federal government has suspended the tariff hike until 19 October 2020. But we think that the rate hike will be further delayed since the NERC has now changed to service-level tariffs, which could be difficult for the labour unions (and more importantly the residential customer) to understand.

Under the new service-level method, the tariff will be based on the areas within the DISCOs network — the areas have been classified based on the hours of electricity supplied. For example, in Ibadan, the largest DISCO in terms of the total units billed, the customers will pay NGN30.39/KWh if they are based in an area where electricity is supplied for four hours daily (the minimum band). If the customers are based in an area where electricity is supplied for 20 hours daily (the maximum band), then they would have to pay NGN55.30/KWh. If we assume that each DISCO charges the minimum tariff, the total collections could increase by 22% (ceteris paribus). This is lower than a weighted-average tariff hike of 44% (under the existing method) required to bridge the gap by 'collecting more from honest customers'.

We think that the government should target the low-hanging fruit first and spend the World Bank's US$750mn to install the outstanding 6.5mn electricity meters, which would cost cUS$650mn; this could stop the vicious cycle of underpayments resulting from estimated billing. The next steps would be to invest heavily in the transmission network to reduce line losses as well as to utilise stranded (or unused) generation capacity, which could increase the electricity supply to 8,500MW — almost twice as much as the 2022 target set by the World Bank.

Below, we illustrate the crisis in six charts. 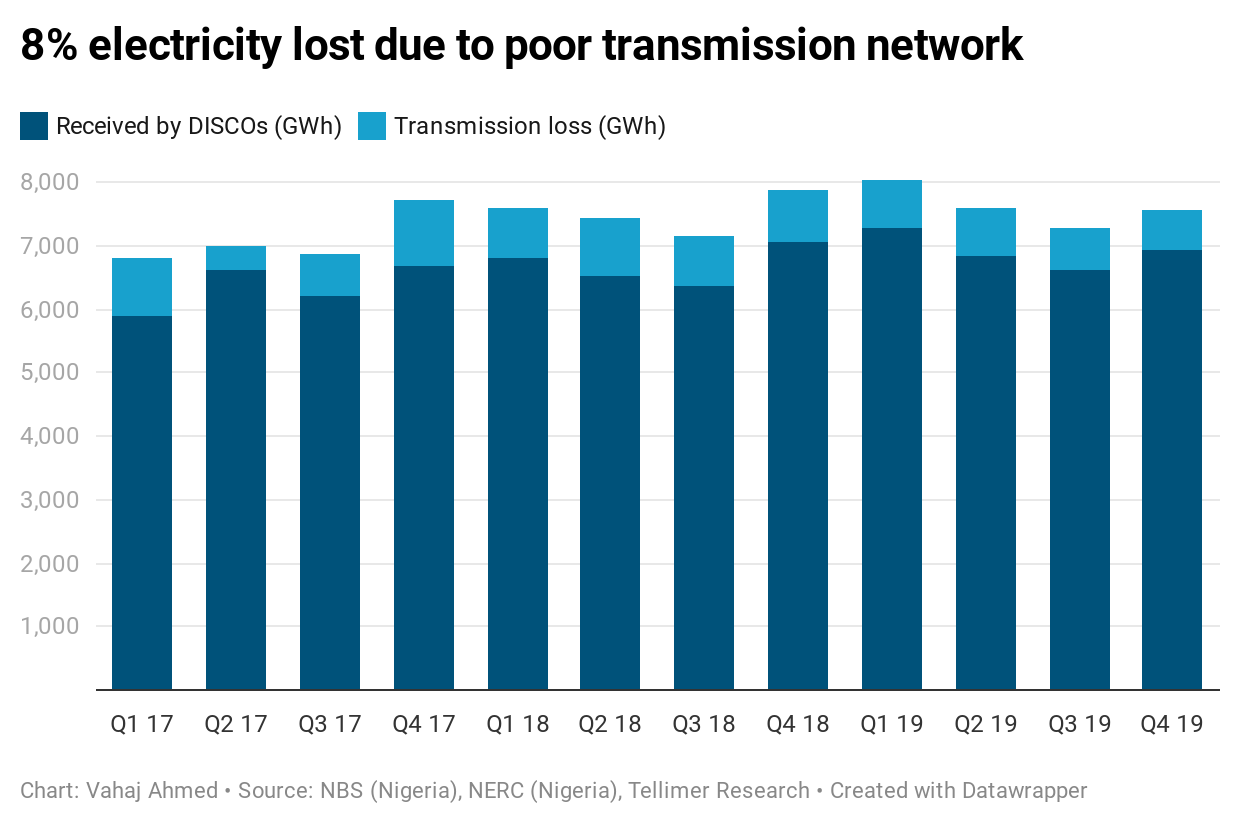 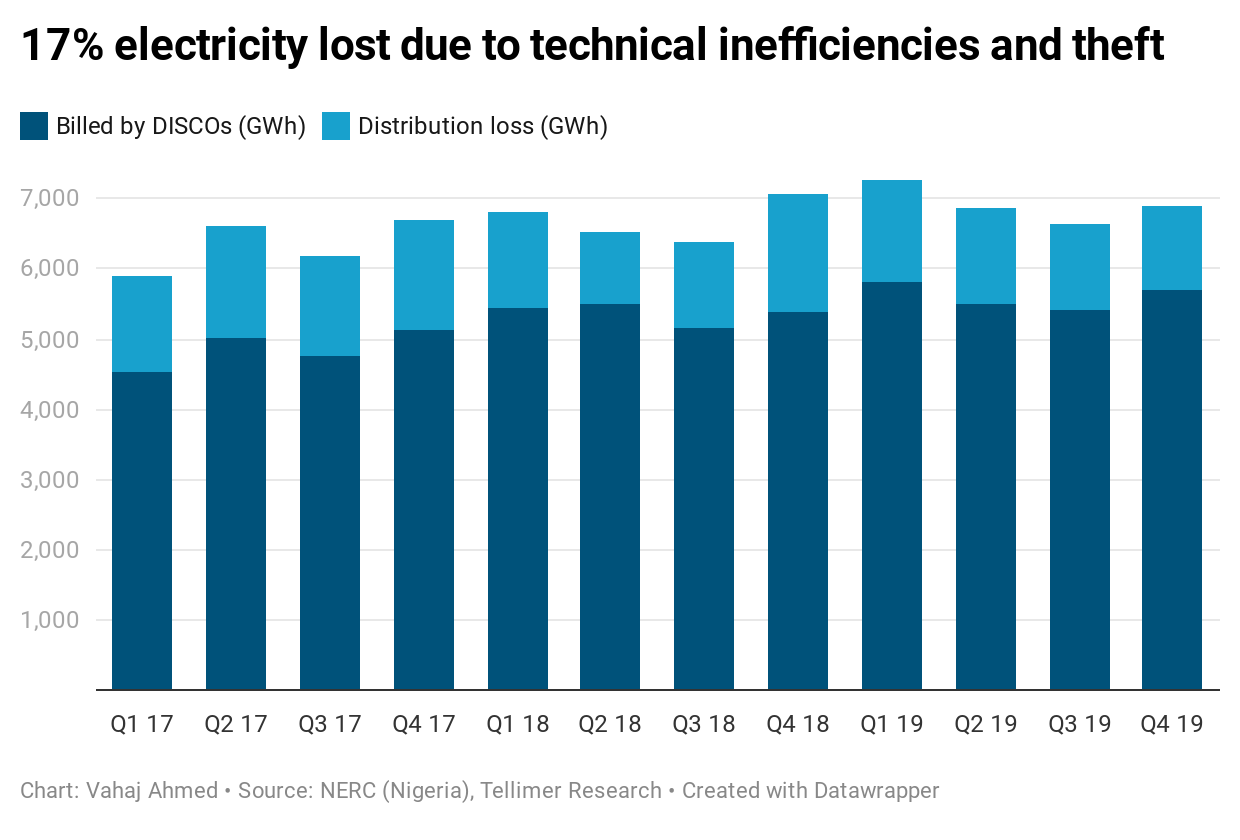 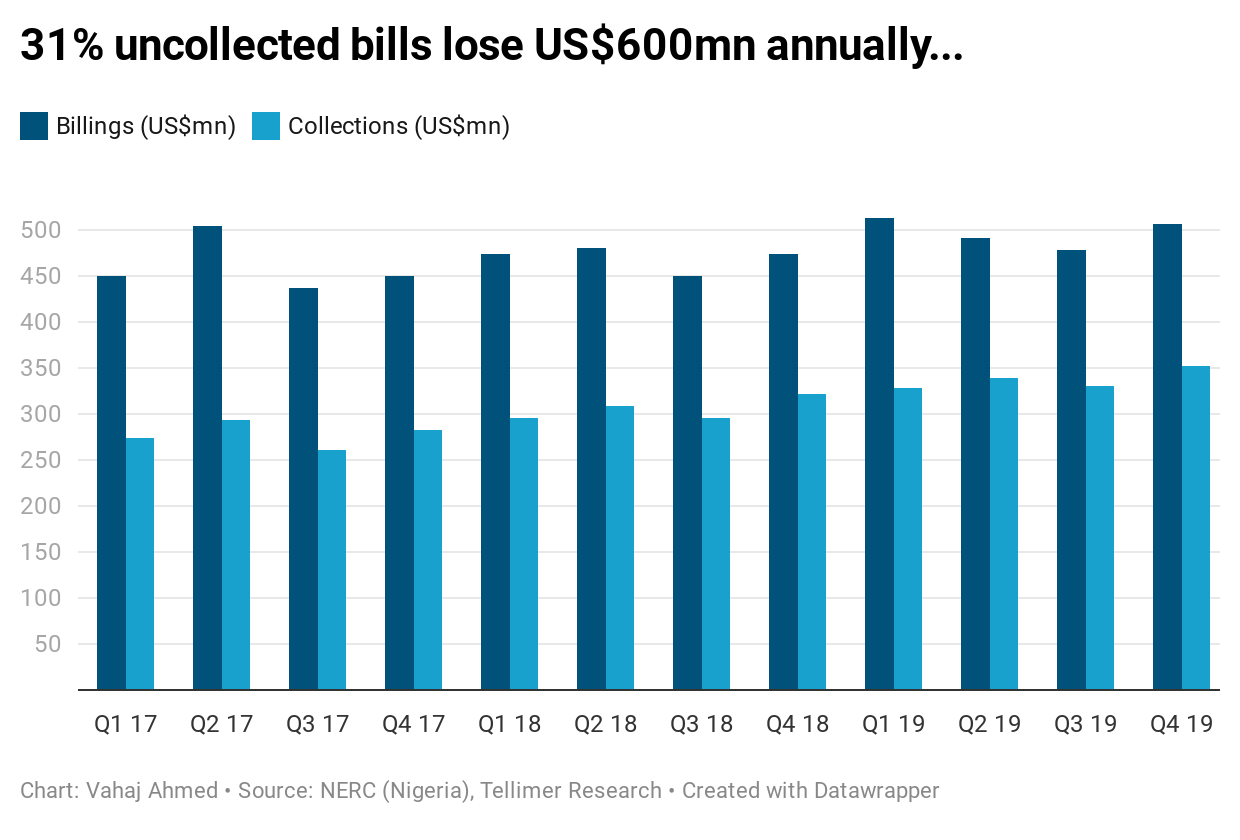 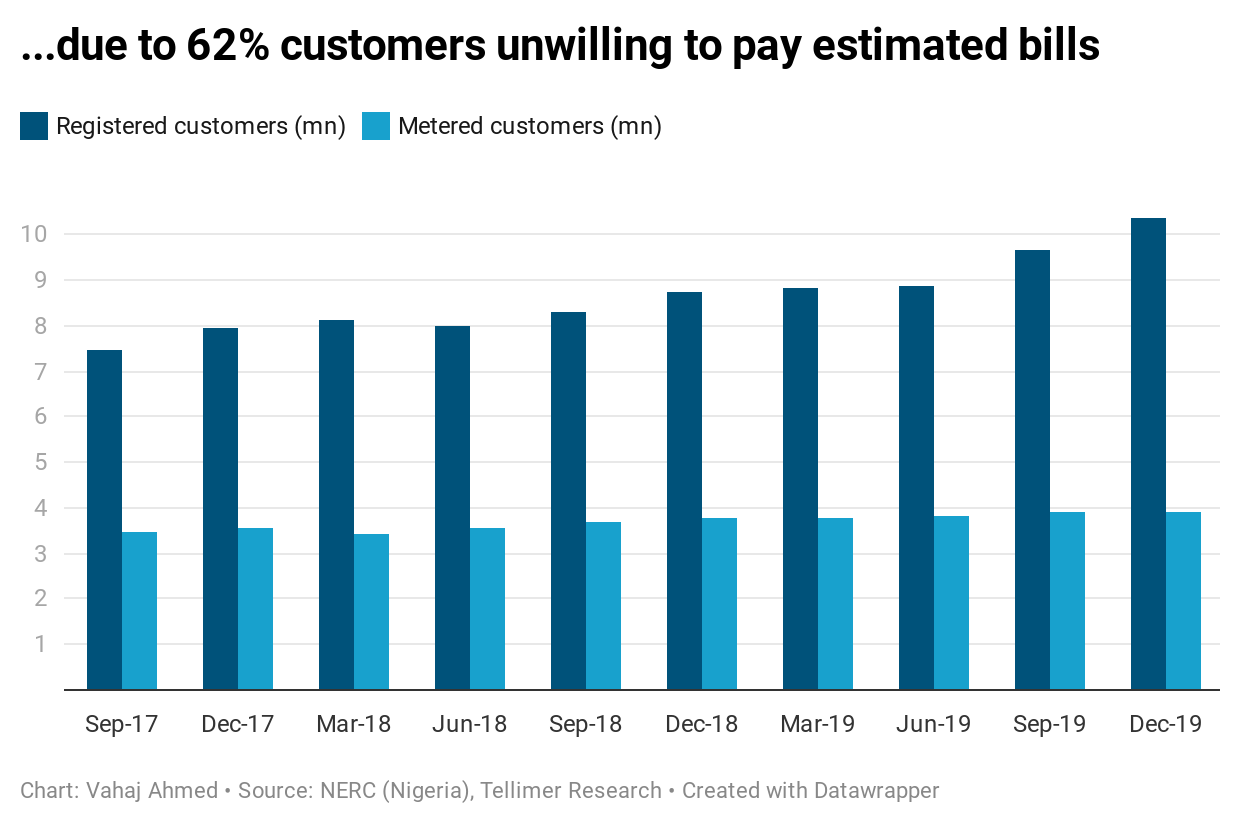 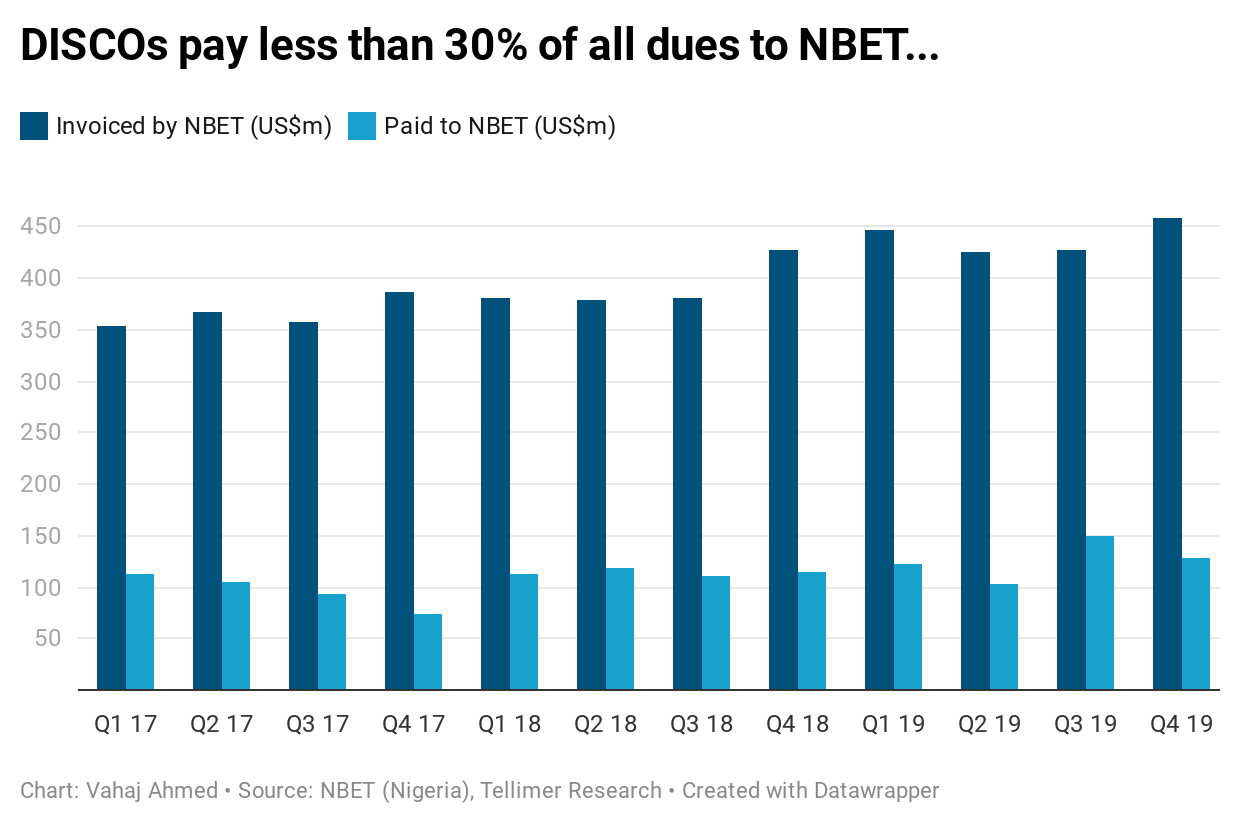 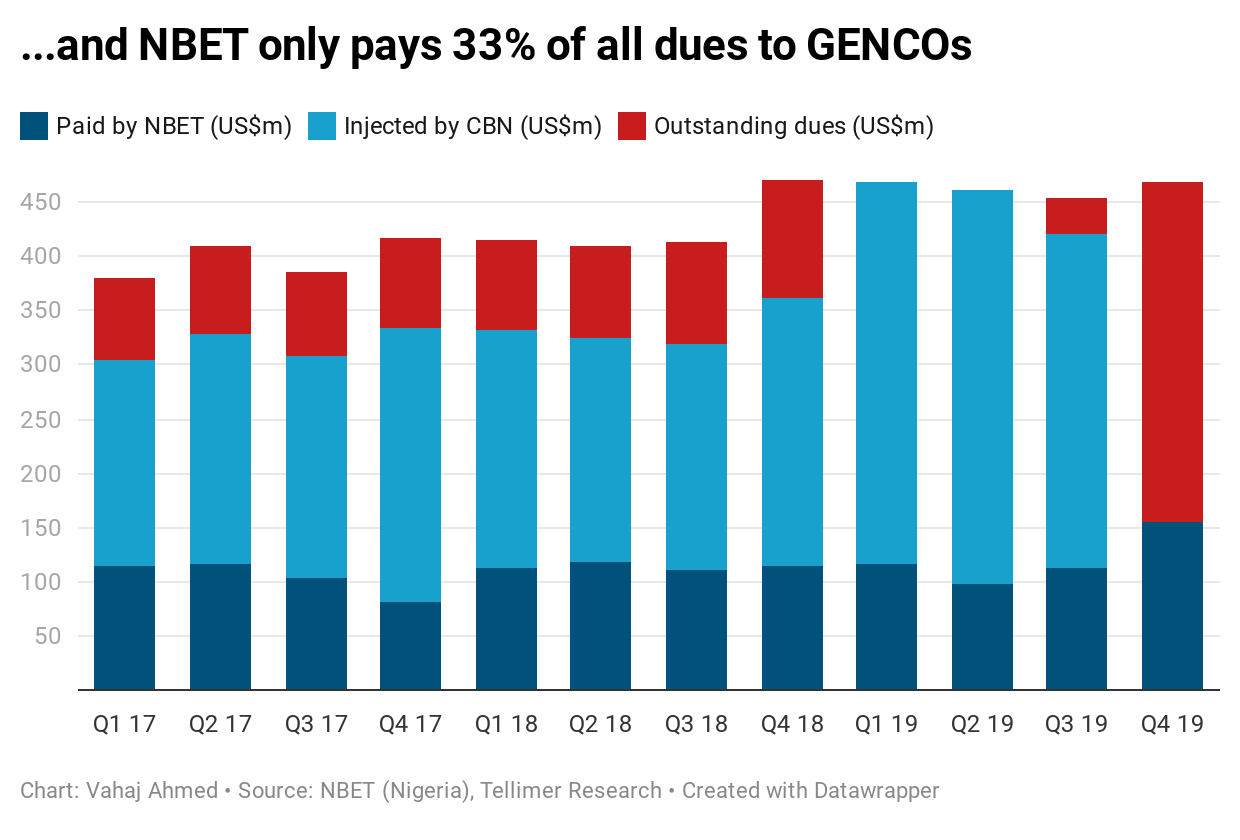