This week, as OPEC+ announced a big output cut to stabilise oil prices, West Africa's 'Cocoa-PEC' – comprising the world’s leading cocoa producers, Ghana and Cote d'Ivoire, and dubbed after the cartel – has hiked the fixed price of their cocoa beans for the coming 2022/23 season. While both countries stand to benefit from the hike, lower prices fixed in Ghana (vs Cote d'Ivoire) leaves room for arbitrage and smuggling.

In Nigeria, NNPC is making big moves ahead of an ambitious IPO plan for 2024. The recently commercialised state oil firm acquired 380 OVH Energy's retail fuel stations from owners Vitol and Helios at an undisclosed sum. The move is line with the firm scaling up its efforts towards profitability. Oil giant Shell, meanwhile, has announced that it will buy Nigeria's Daystar Solar – its first power company acquisition in Africa – as it expands its global renewables portfolio. This reinforces our case for solar as a lucrative and growing market opportunity for investors.

And we're witnessing persistent sell-offs in Nigeria's equities and a rise in local yields. The naira has also depreciated to the year's low of NGN730/USD.

Oil Major Shell has announced that it will be acquiring Nigeria's Daystar Solar for an undisclosed sum. This is Shell's first power company acquisition in Africa, despite being one of the largest oil and gas producers in the continent. According to a statement from Thomas Brostrøm, Shell's vice-president for renewable generation, "We're helping to address a critical energy gap for many who currently rely on diesel generators for back-up power." Daystar provides off-grid power to commercial and industrial clients in Ghana, Nigeria, Senegal and Togo.

We have previously highlighted the growing demand and consumers' interest in solar as a power source in Nigeria, especially given the frequent breakdown in the national grid (eight times so far this year) and the challenges with pricing and supply. This latest acquisition by Shell reinforces our case for solar as a lucrative and growing market opportunity for investors.

Although the race to close the gap in electricity access in Africa is a long one – and would require US$80bn annual investments to reach sustainable energy targets, according to the IEA – we are likely to see increased investments in the space, especially amid efforts to ramp up green energy sources. 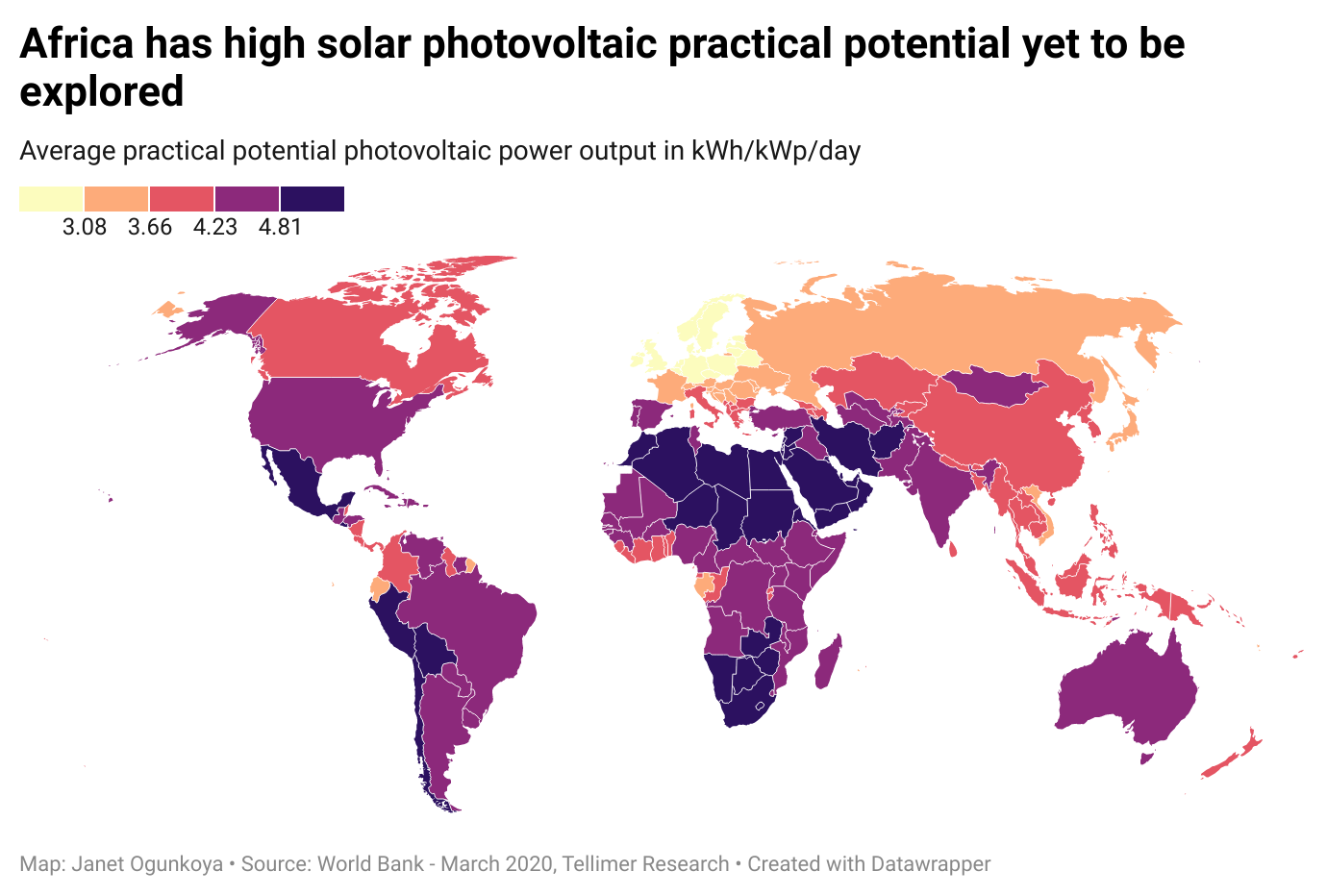 On 3 October, Burkina Faso witnessed its second coup in a single year after army captain Ibrahim Traore took power, overthrowing the previous military leader, Paul-Henri Damiba, over concerns of rising tensions in the Sahel region. Traore used the failure to deal with terrorist activities by jihadist groups, which started in 2015, as the reason for ousting Damiba, who himself overthrew the country’s democratically elected president for the same reason.

Traore has committed to comply with the two-year transition timeline to civilian rule by July 2024; a commitment also made by Damiba to the Economic Community of West African States (ECOWAS). This was the main reason for lifting economic sanctions on Burkina Faso by the bloc.

The rising number of military coups in the West African region this year has been a worrying trend, as it increases political instability and obstructs the economic development of the region. Other countries under a military regime include Mali and Guinea – sanctions has been lifted on the former after committing to an acceptable two-year civilian-transition plan, while the latter is still under economic sanctions after its three-year transition plan was rejected by ECOWAS.

West Africa's 'Cocoa-PEC' – dubbed after OPEC and comprising the world’s leading cocoa producers Ghana and Cote d'Ivoire – have raised prices for cocoa beans due to tough weather conditions that recently threatened harvest. On 5 October, Ghana increased prices by 21% from GHS10,560/tonnes to GHS12,800/tonnes (US$1,249) for the 2022/2023 season. This is lower than the cUS$1,360/tonnes (9% increase) set by Cote D'Ivoire on 1 October.

The price differential between the two countries leaves room for arbitrage – the premium pricing favours Cote d'Ivoire as the world's biggest producer (40% of global supply vs Ghana's 20%) – and increased smuggling activities. However, it is worth noting that Ghana's pricing reflects the impact of the cedi's depreciation, which has lost over 30% of its value so far this year.

Overall, the increased pricing will benefit both producers, especially as the cocoa market is estimated to close the 2021/2022 season with a deficit of 230,000 tonnes compared with an over supplied market in the previous season. 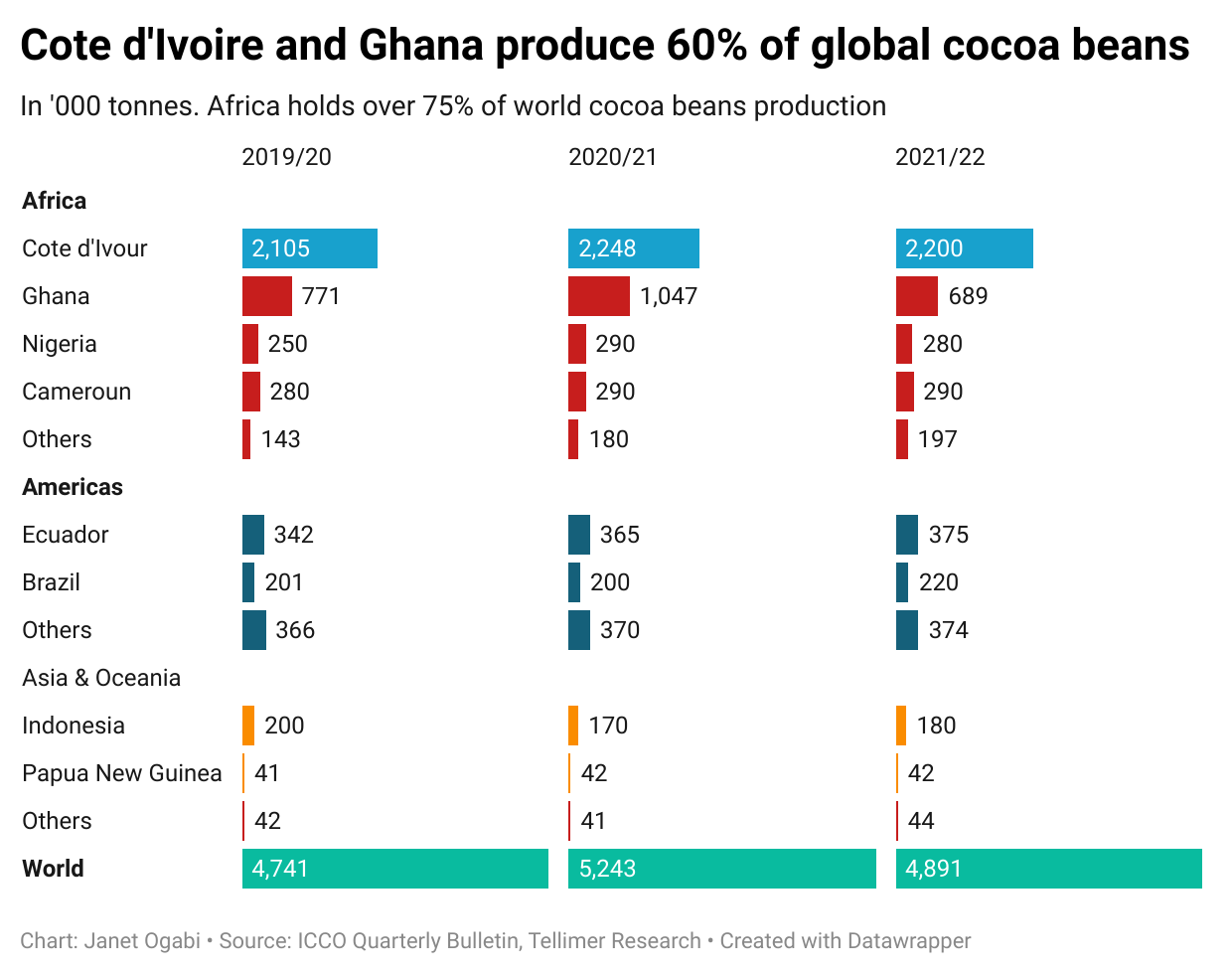 Nigeria's NNPC is making big moves ahead of IPO

Nigeria's commercialised state oil firm, the Nigerian National Petroleum Company Limited (NNPC), announced the acquisition of OVH Energy's retail assets from owners Vitol and Helios Investment Partners. The assets acquired include 380 fuel retail stations situated in Nigeria and Togo, among others, for an undisclosed sum. NNPC's Group Managing Director stated that the firm aims to increase its retail stations to 1,500 making it the largest fuel retailer in Africa. It would, therefore, not be surprising to see more acquisitions from NNPC in the future. The latest acquisition trails the firm's ambitious plan of being IPO ready by 2024.

NNPC is clearly making some bold moves as a commercial entity with the aim of improving profits further – in 2021, the group announced a spike in profits by 135% to NGN674bn. Similar to other downstream operators in Nigeria, the possible removal of subsidies would provide an upside to the NNPC's profit targets, as increases in retail pump prices translate to better margins. Although it is still unknown when exactly the subsidies will be removed, it could come after the elections in February 2023 when poll-friendly policies end, and as the Dangote refinery begins operations.

Tellimer will be hosting a series of in-person bilateral meetings – with an online option available – with IMF teams and governments from emerging and frontier markets. See our full list of countries here.

Nigeria's equities market extended losses by 3.9% over the past week, taking the year-to-date gain down to 11%. Market breadth was negative with 45 losers and only 21 gainers. Sell-offs in blue chip names – AIRTELAF, NESTLE, GTCO, MTNN, ZENITHBA – were major drivers of the losses in the week.

As interest rates pick up, local Nigerian investors are likely to exit the equities market, which explains the losing streak. Looking ahead, we expect interest in the Nigerian market to remain tepid. 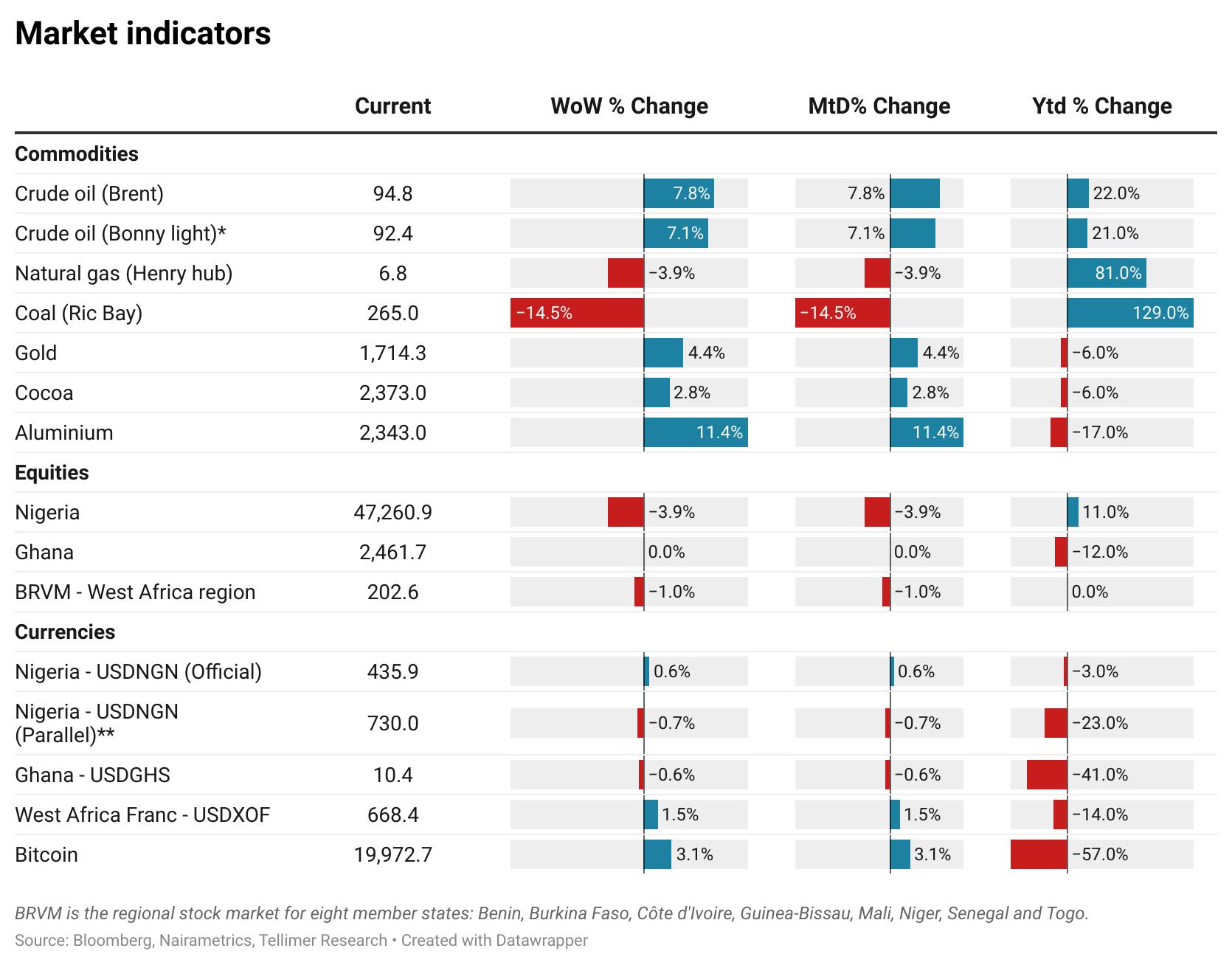 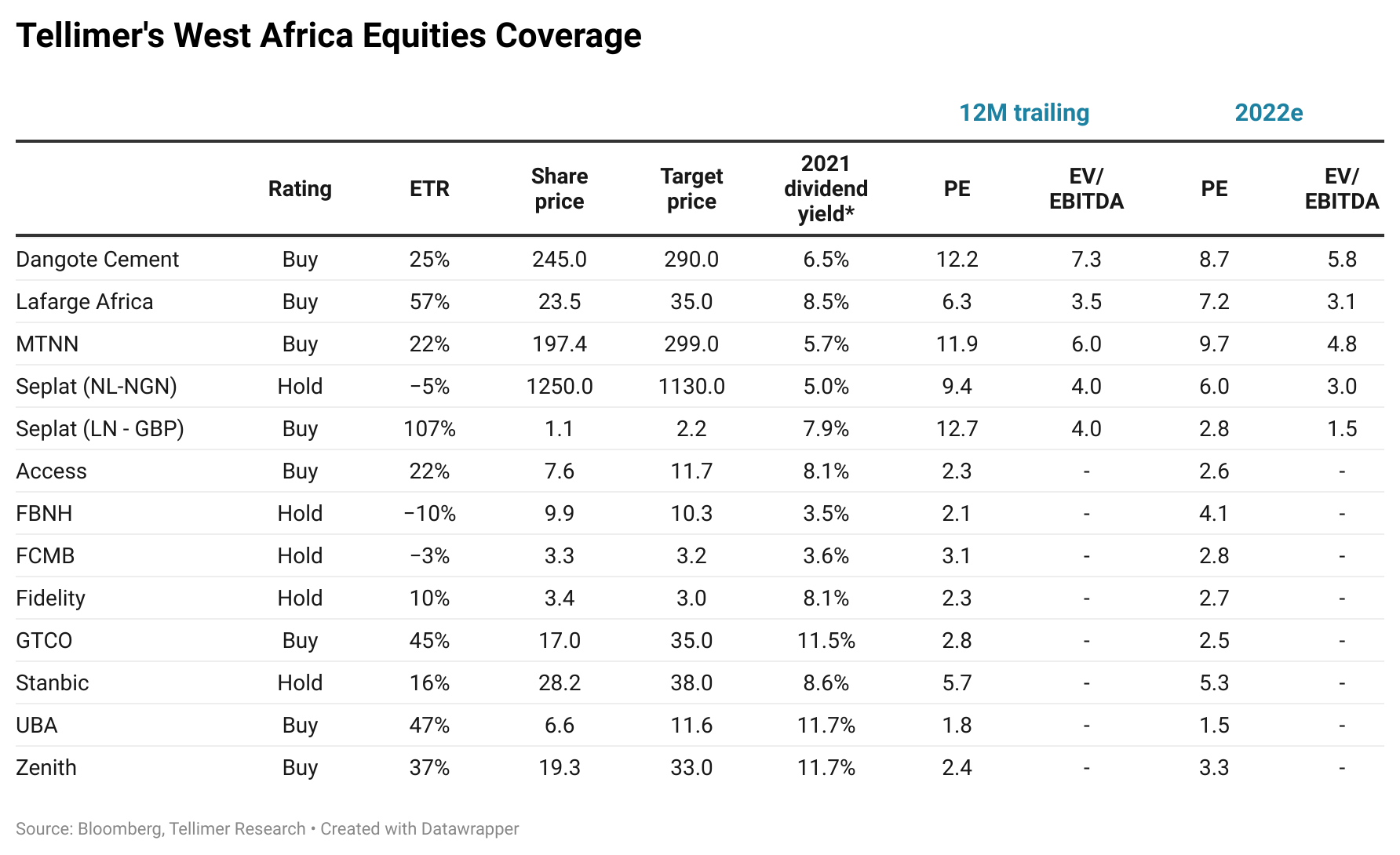 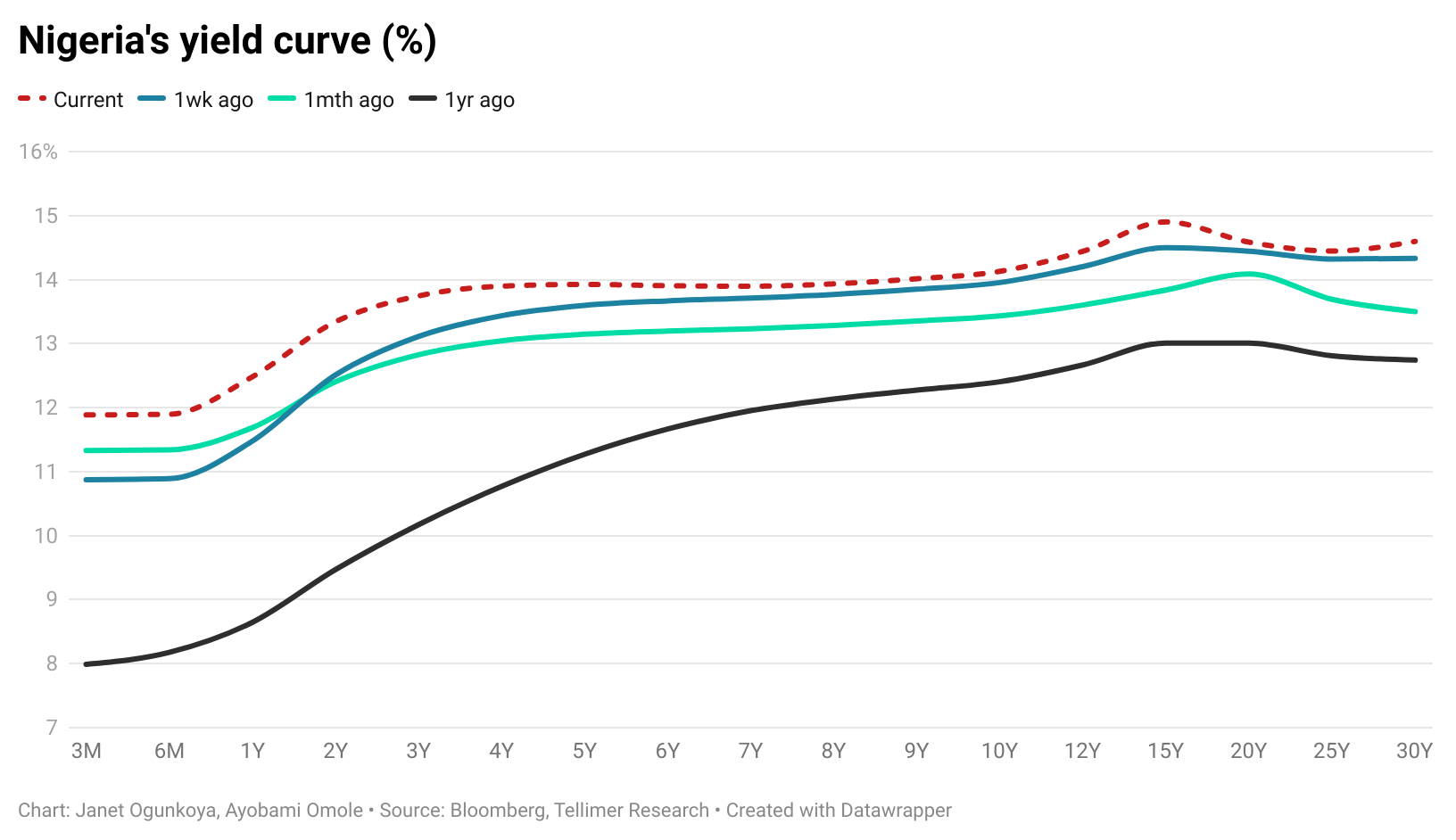 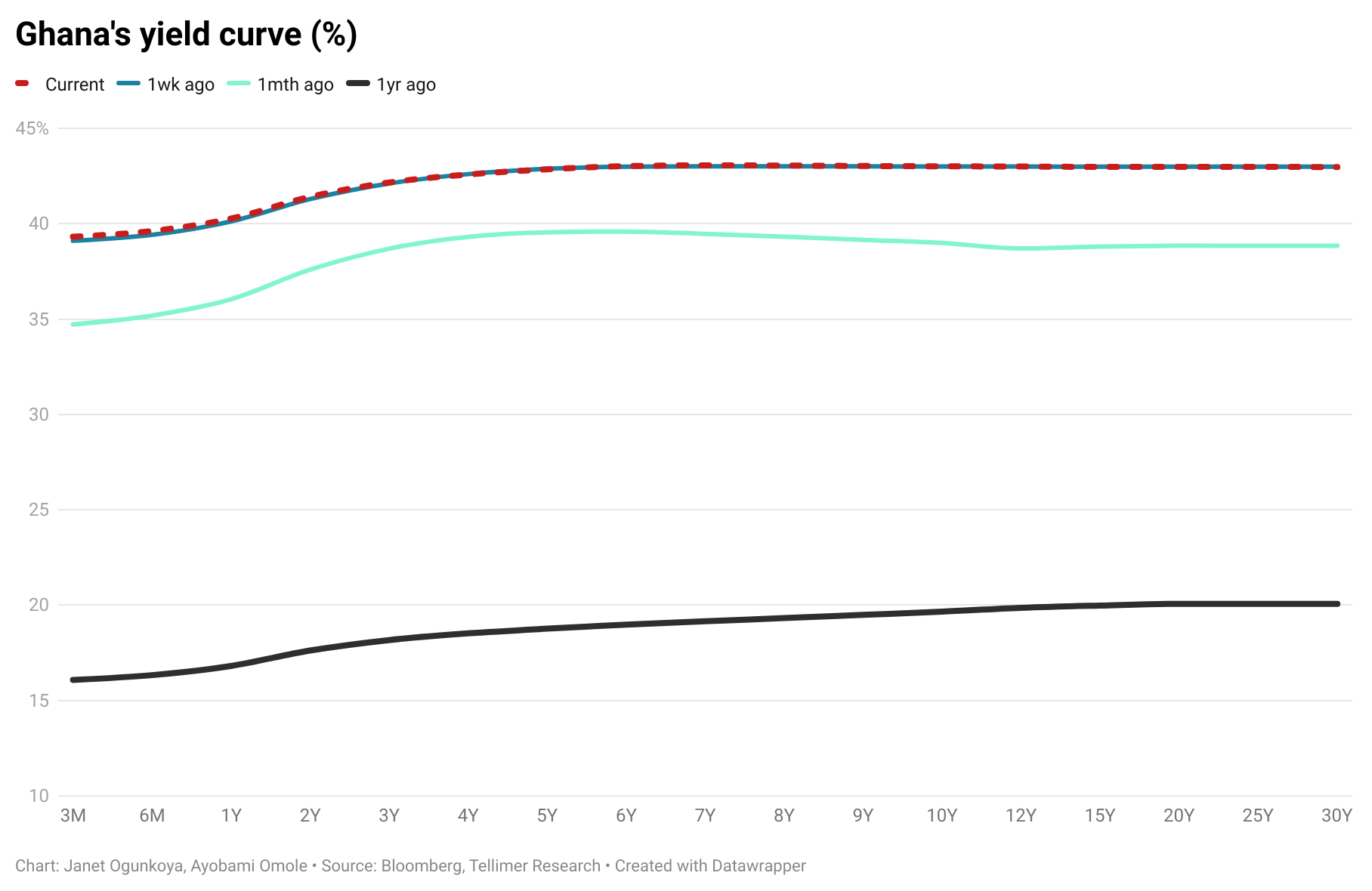