Ghana is taking a hawkish fiscal stance to save the cedi, with new plans to cut discretionary spending and charge an E-levy. Meanwhile, Nigeria’s naira hit a new 2022 low amid receding foreign investor interest and declining FX reserves.

Nigeria’s leading industrial conglomerate, Dangote, commissioned a US$2.5bn fertilizer plant with 3mt/annum production capacity last week. The plant is the largest in Africa, just ahead of the Indorama Eleme Fertilizer & Chemicals Limited (IFL) 2.8mt plant (also in Nigeria), which was commissioned in August 2021. The new plant will service the Nigeria market, which has low fertilizer consumption of 19.7kg per hectare of arable land compared to the SSA average of 20.0kg and world average of 136.8kg.

The timing of the new plant comes as global fertilizer prices hit record highs due to supply shortages from the Ukraine-Russia war (Russia is the world’s largest fertilizer exporter). The new plant aims to service local and export markets, but will have to contend with the spike in gas prices – an essential raw material and fuel for fertilizer. Overall, it should aid the growth of Nigeria’s stunted agricultural sector, which contributes around 20% to GDP. 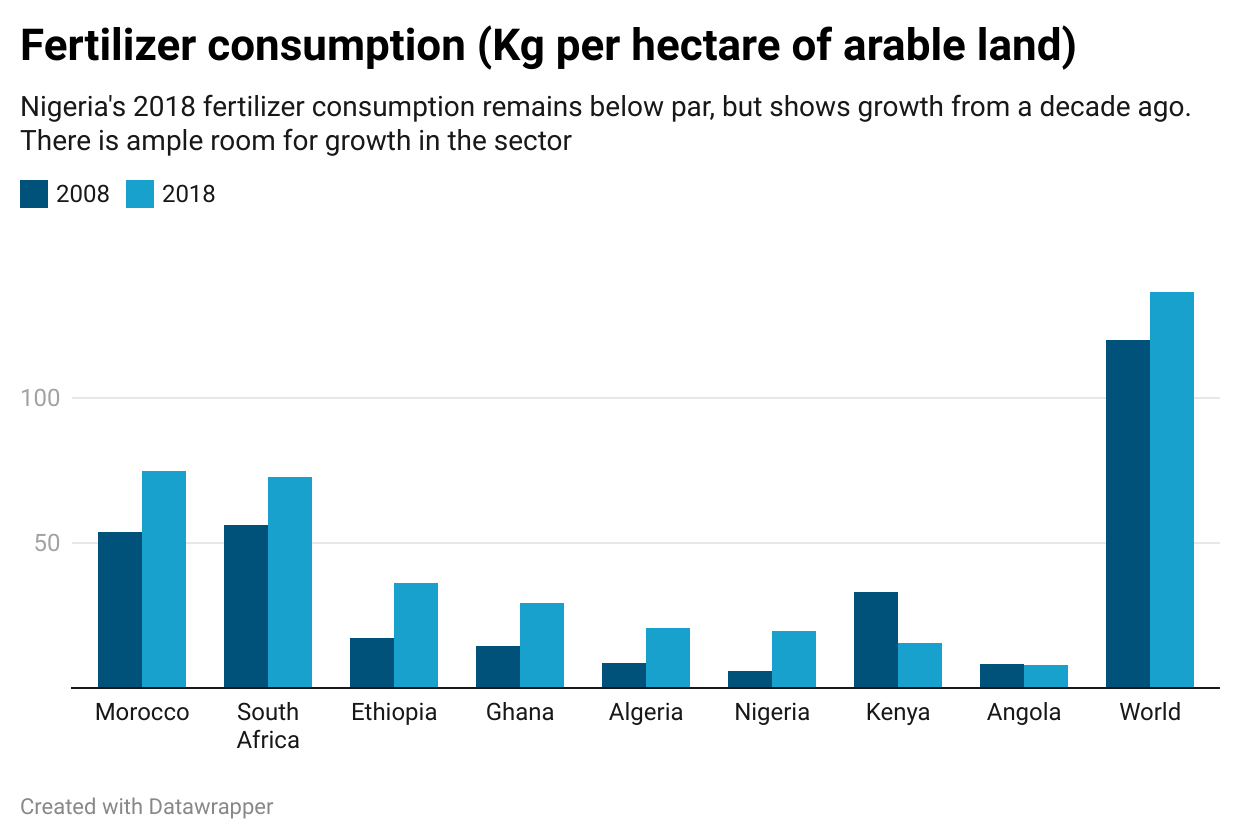 Agriculture forms the backbone of many emerging and frontier economies. Technology is beginning to disrupt this centuries-old industry, and investors are waking up to the opportunity. 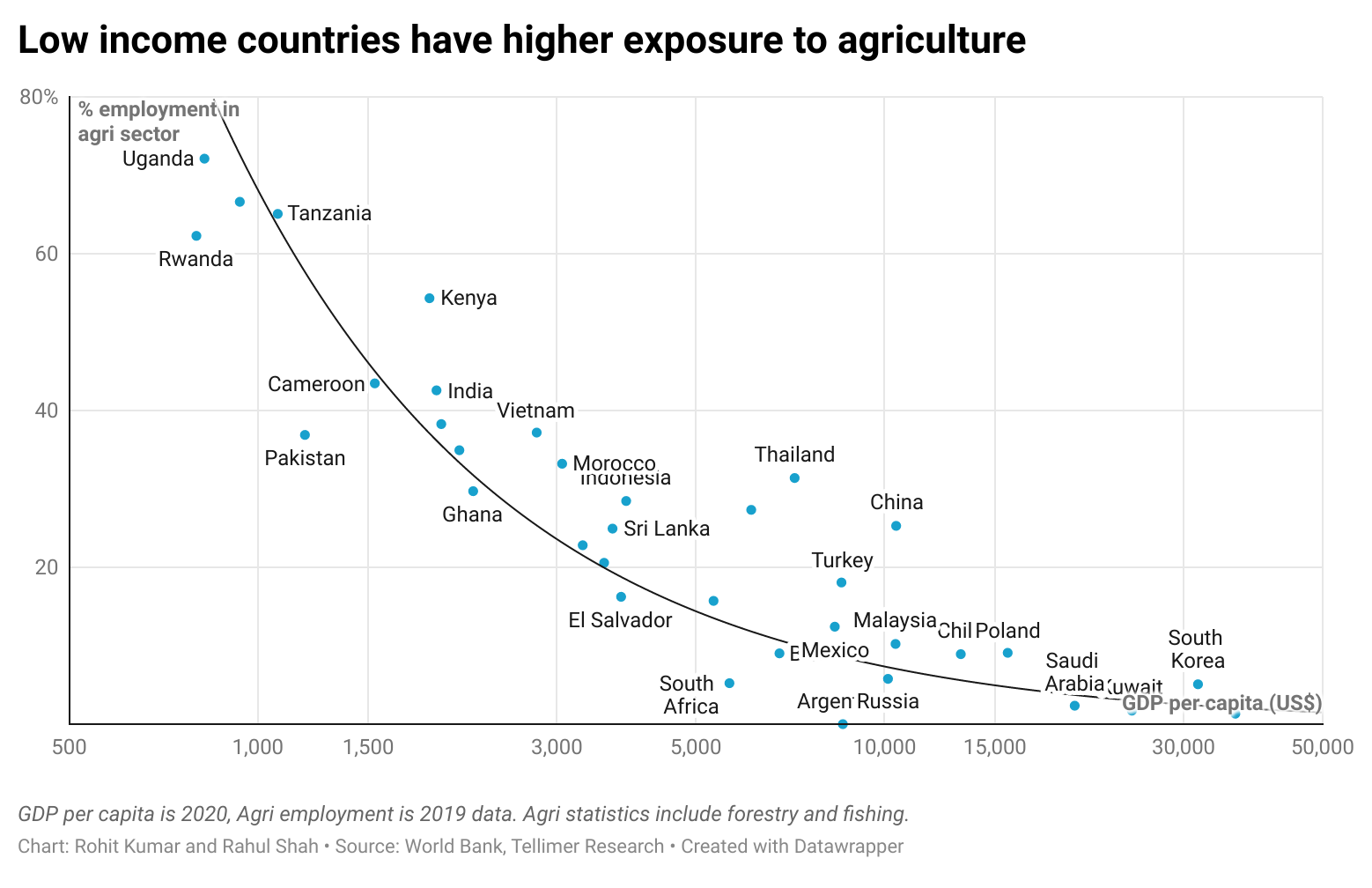 Recently released data on Nigeria’s capital imports showed a decline in 2021 to US$6.7bn, from US$9.7bn in 2020. The declines were seen across all segments (see the chart below), but was not surprising given the persistent FX issues which remain a turnoff for foreign investors. 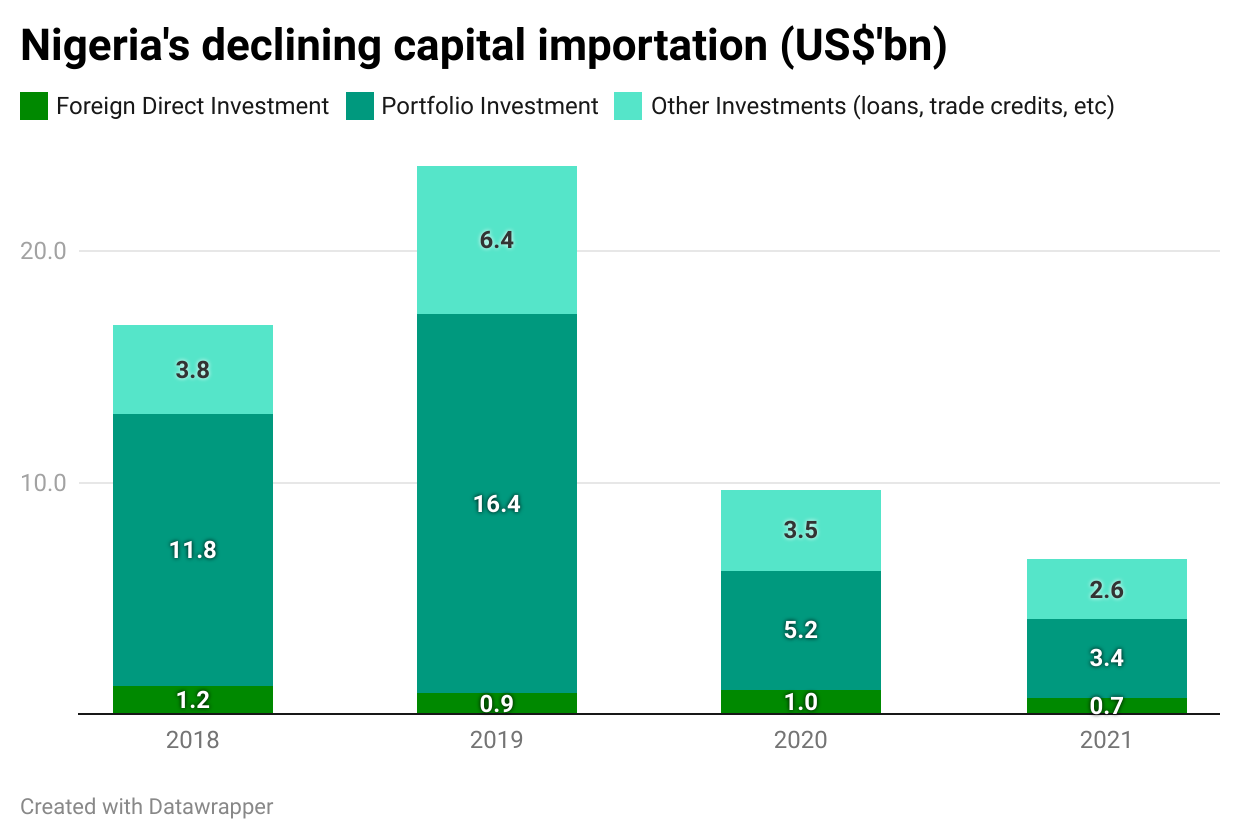 Nigeria’s FX reserves also continue to decline (due to low oil production and high subsidies), while there appears to be no respite for the naira which also depreciated to a new 2022-low in the parallel market of NGN588/USD after hovering at around NGN575 for most of this year. Overall, Nigeria’s external position is yet to see an end to the tumultuous times. This, in addition to rising inflation, further makes a case for a hawkish monetary policy stance especially at the next meeting in May. However, consensus expectation is for no rate hike until September.

The Russian-Ukraine war has intensified the commodity super-cycle . Besides oil, maize and wheat have also been enormously impacted by the ongoing crisis. Higher wheat prices could lead to hunger in specific countries, especially net importers, and our wheat forecast suggests that it will get worse before it gets better.

Wheat accounts for a significant part of Africa’s trade with Russia and Ukraine. To mitigate the effect of this challenge and ensure that the continent is self-reliant in future, the African Development Bank (AfDB) is raising funds to help 40mn African farmers utilise climate-resilient technologies and increase their output of heat-tolerant wheat varieties. However, the funds will be disbursed in the form of loans rather than grants. 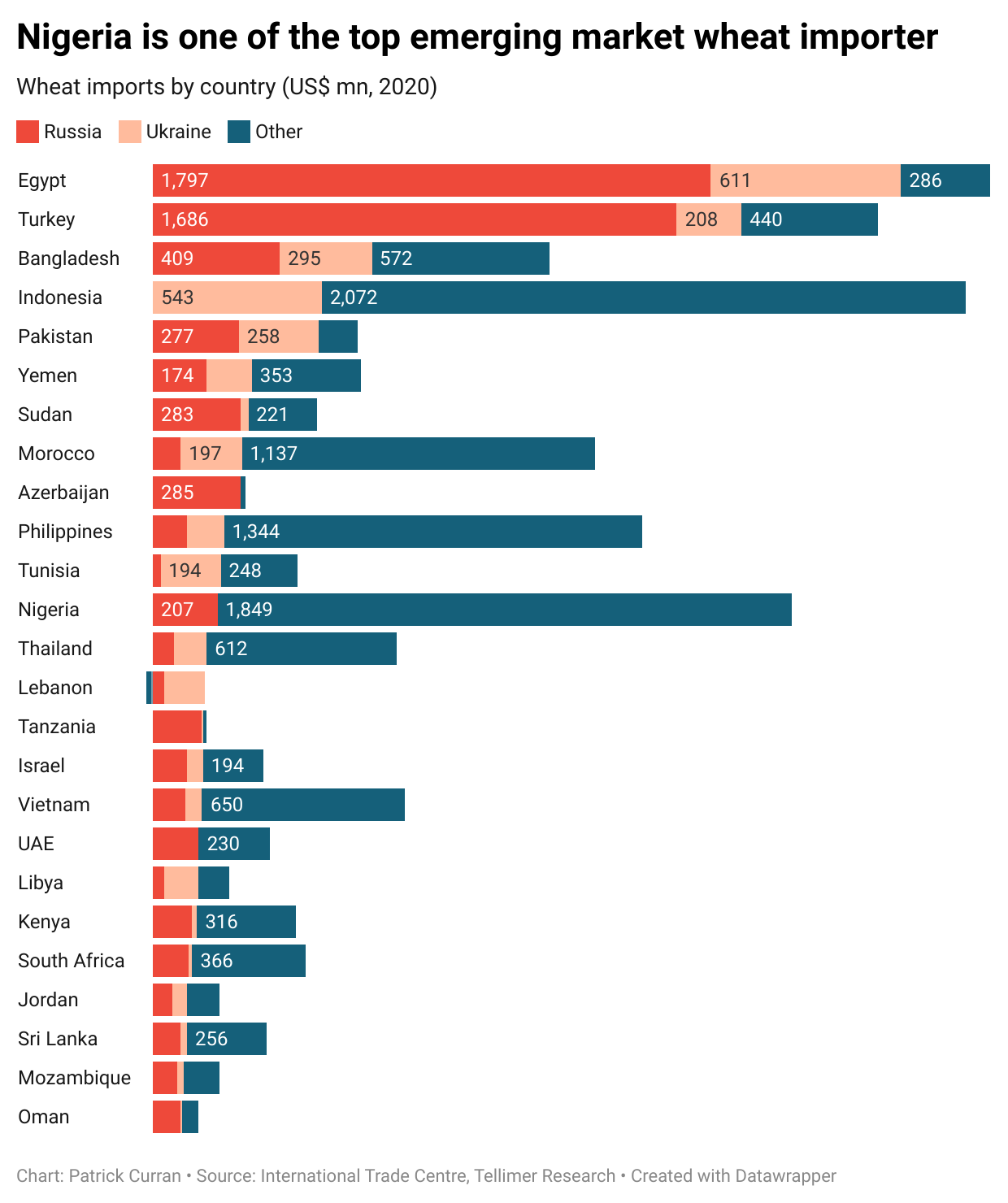 The government of Ghana has announced plans to cut discretionary spending by a further 10%, on top of a 20% cut announced earlier. Ghanaian lawmakers have also passed a 1.5% E-Levy on all electronic transactions – ie, all inward remittances (to be paid by the recipient), all P2P mobile transactions (and bank transfers) and all POS/ Merchant payments.

Ghana is in a tough economic situation – there are serious concerns around debt sustainability, a fall in the cedi despite rising commodity prices, and elevated inflation. To avert what may seem like an impending crisis, the central bank recently increased its interest rate and the fiscal authority is now cutting spending and increasing taxes to reduce its budget deficit.

Orange, the French-listed telco with operations across Africa, is testing satellite internet to boost coverage on the continent. Satellites can change the world by expanding 5G coverage, enabling 6G and speeding the transition to Web 3.0.

But while there are opportunities in this technology, solving the coverage gap is not sufficient on its own to bring everyone online.

Ghana’s inflation has increased for nine consecutive months, with the latest reading, for February, jumping to 15.7% – the highest since October 2016. Rising inflation, increasing fiscal concerns and credit rating downgrades has had a negative impact on the cedi and informed the latest interest rate hike by 250bps to 17%. The inflation numbers for March are expected to print even higher at 17%, according to consensus expectations.

Nigeria's GDP grew by 3.4% in FY 2021, the strongest growth since 2014 – partly attributable to the low base effect of the Covid-induced lockdown in 2020. However, for Q1 22, we expect slightly lower economic growth, primarily due to the disruption caused by fuel scarcity, collapse of the national grid and extremely high energy costs.

Nigeria’s all-share index fell again this week, dropping 0.55% (after a 0.42% decline previous week). Market breadth was nearly flat, with 33 gainers and 34 losers. Some of the major gainers include MTNN, WEMABANK, ETI, PZ, UBA and ACCESSCO, while the losers were dominated by banks – ZENITHBA, FBNH, STANBIC, FCMB and GTCO.

Access Bank Holdings relisted its shares under the new HoldCo name, marking the bank's last major move to complete its transition to a HoldCo structure, which allows the bank access to new markets and deepen operations in its non-banking lines. The stock is trading 8% higher ytd and we have a Buy rating on the stock.

The outlook for Nigerian equities is unchanged: FX restrictions will keep Nigeria off-limits for fresh capital from foreign investors, while locals will dominate. Also, several factors point to increased domestic yields towards H2, which might put a dampener on local participation in equities. 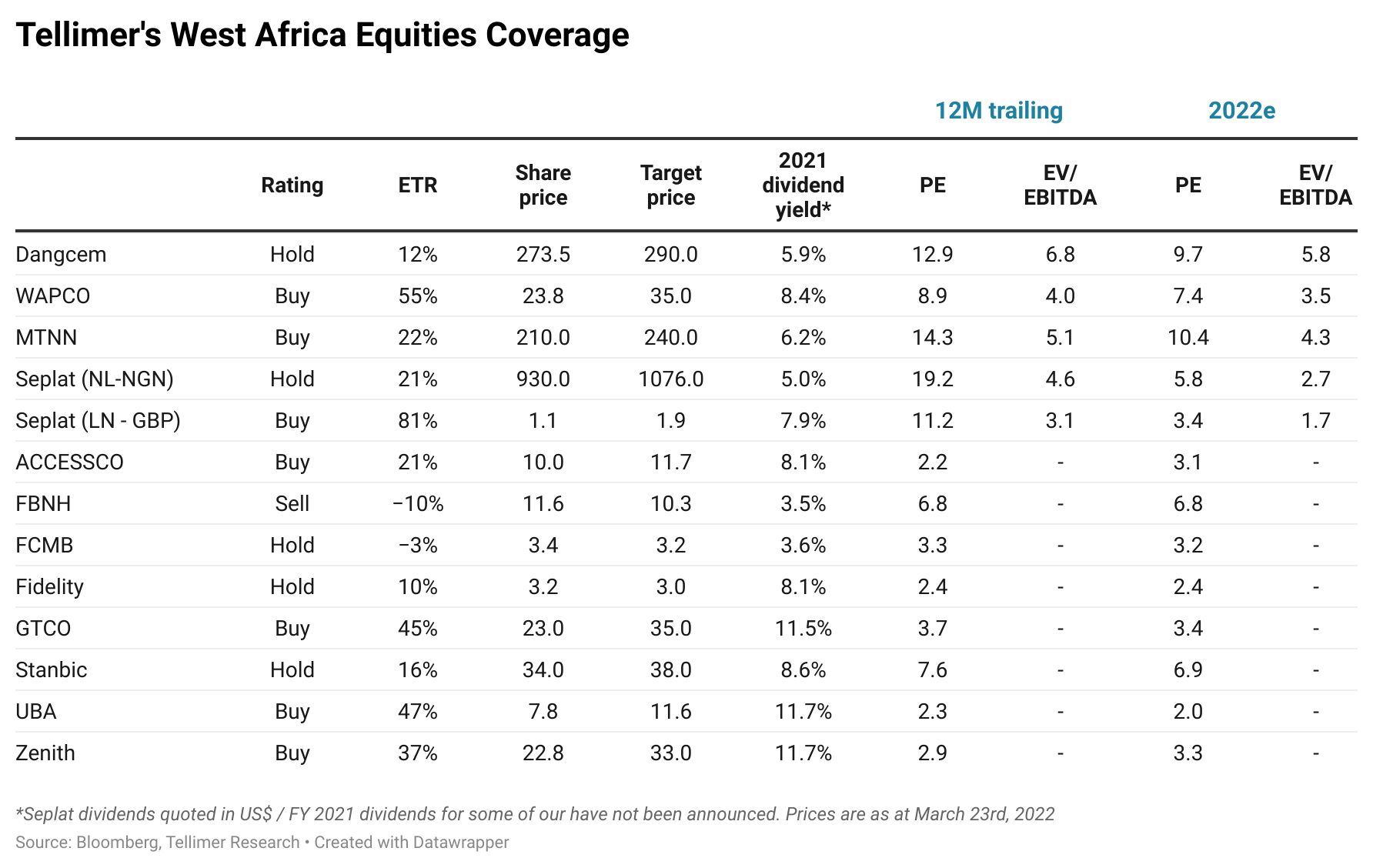 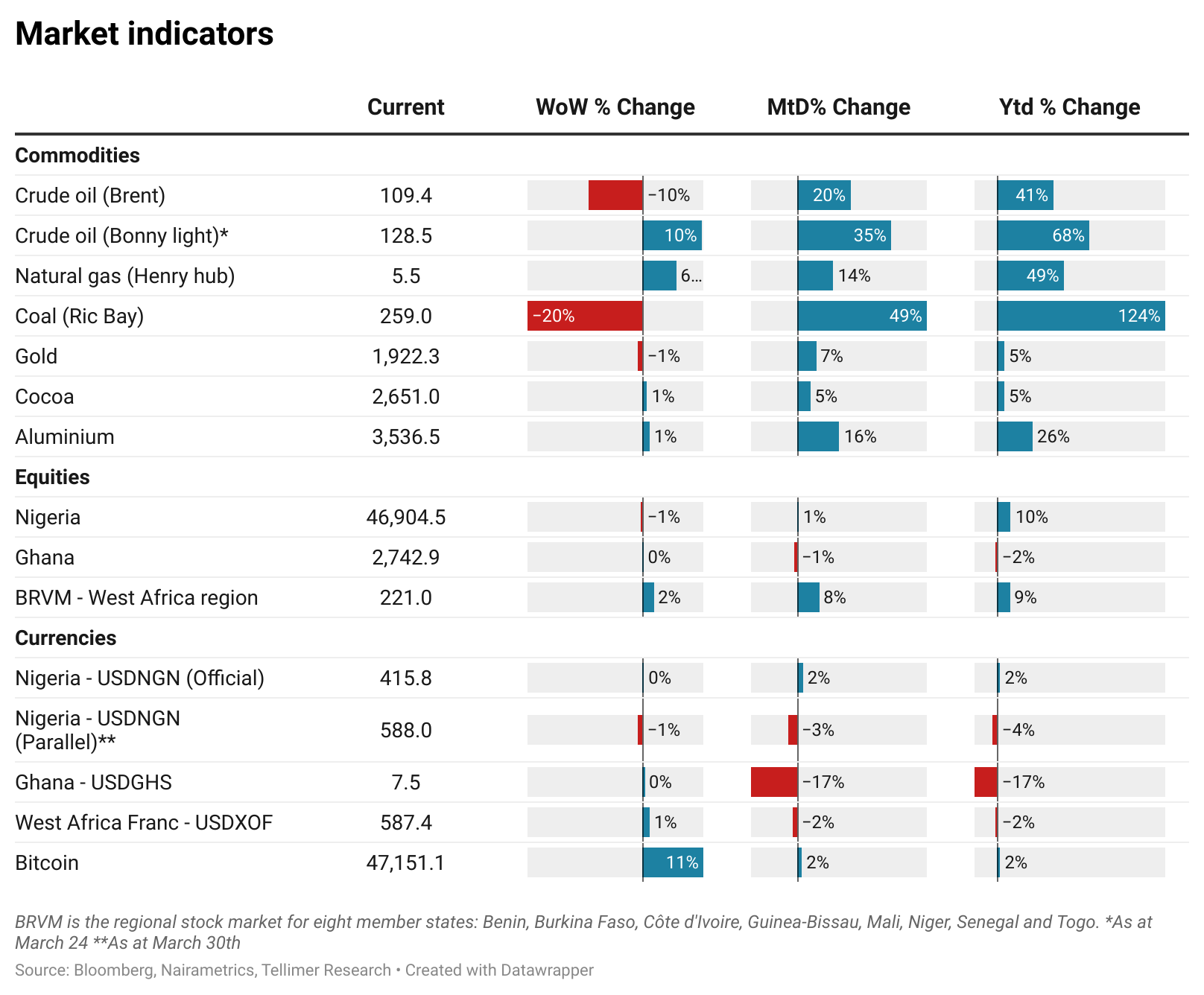 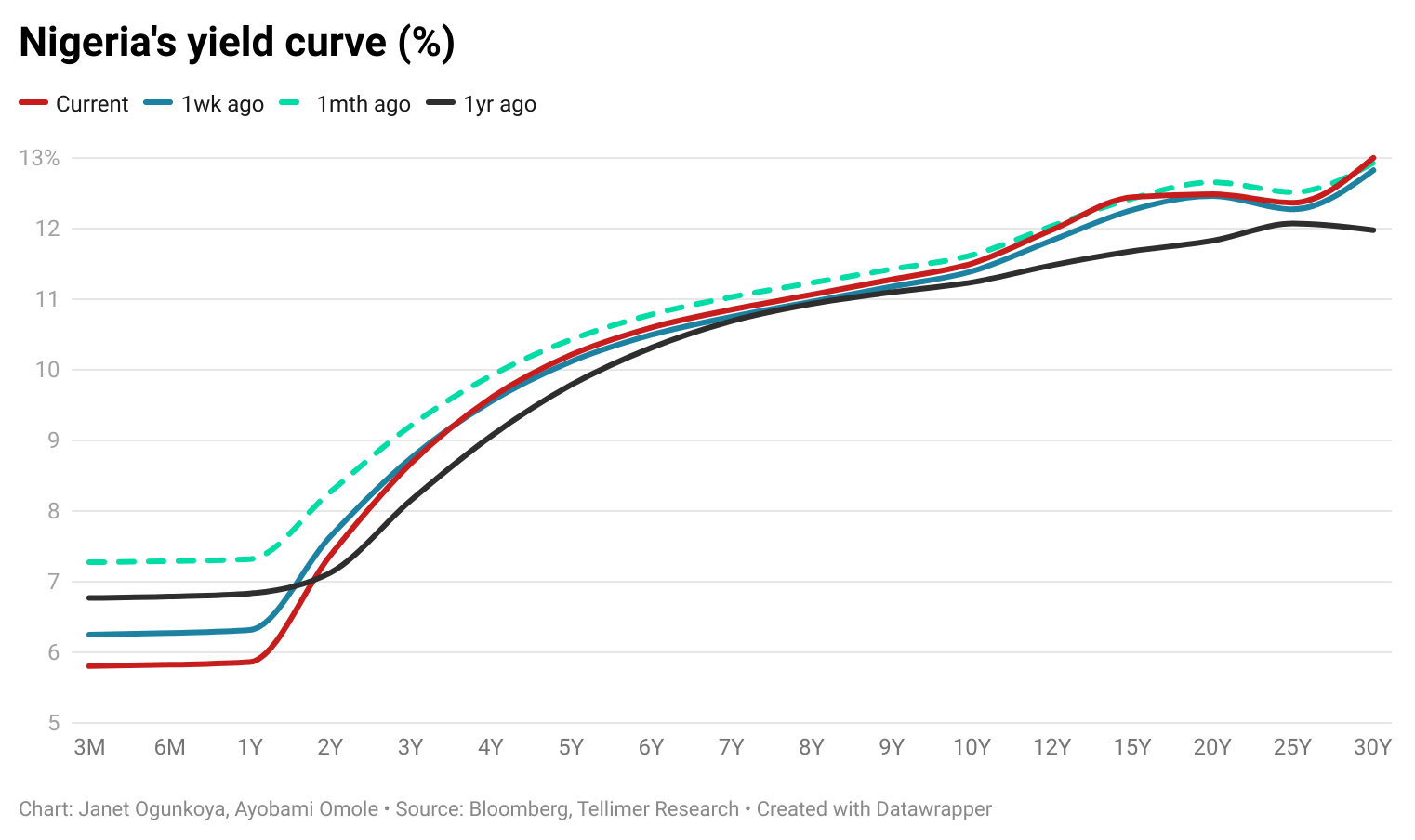 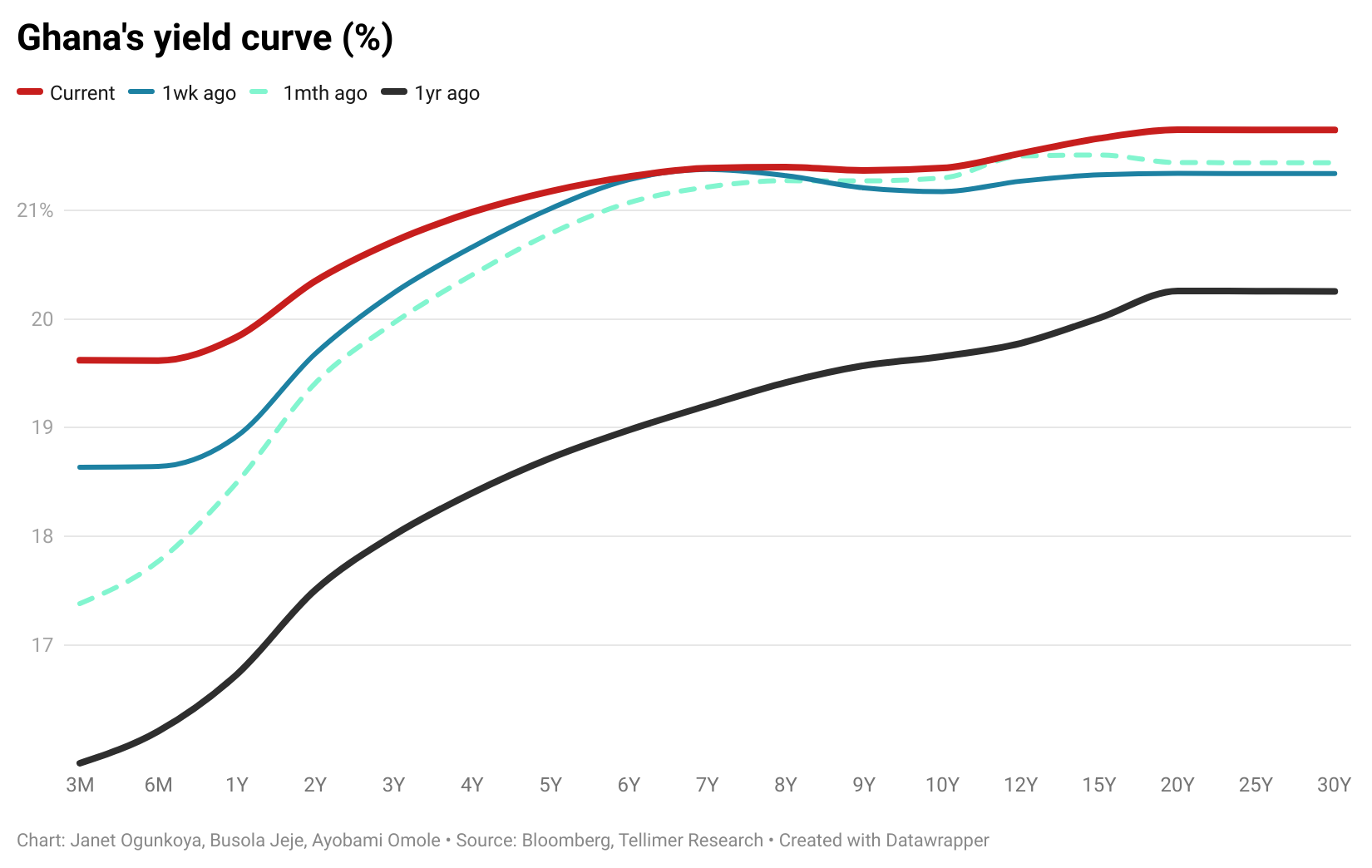