Nigerian banks have received a letter from the Central Bank of Nigeria (CBN), informing them of new exchange rates for dollars flowing from the International Money Transfer Operators (IMTOs).

Nigeria, Africa’s biggest economy, relies on crude sales for 90% of its foreign exchange earnings, which have come under pressure in recent times. Brent crude has fallen below US$30 as the nosedive in oil prices persists in the wake of the continued price war between Saudi and Russia, compounded by weaker oil demand on account of Covid-19.

The government and CBN had already unveiled a package of new policy measures last week to buttress the economy, including cutting the budget by 14%, announcing a NGN1.1tn intervention fund and lowering petrol prices.

Nigeria has operated a multiple exchange rate regime for years, which it has used to manage pressure on the currency. Current global trends, as well as a steadily declining reserves balance – now at US$36bn – may have necessitated this move.

Gross oil revenue and oil prices over the last 8 quarters 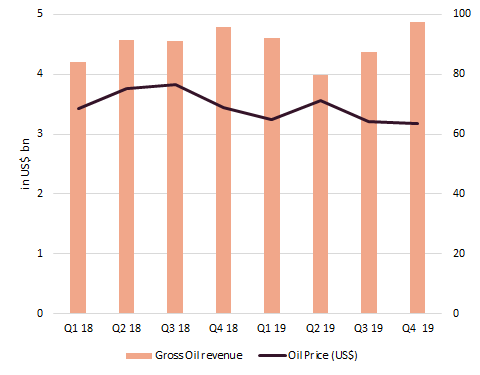 It appears that the CBN has accepted the inevitable depreciation (recall that the CBN had previously released a circular disregarding the need for a currency devaluation) and allowed the naira to trade at a rate more reflective of market fundamentals. This is the highest official exchange rate between the dollar and naira in nearly two years, suggesting a formal devaluation is on the horizon.

Going forward, the dollar/naira exchange rate on the Importers and exporters (I&E) window will be allowed to move freely around the target band of NGN380, actively eliminating the opaqueness in the Nigerian foreign exchange market. In contrast, the old systems were inefficient and allowed for questionable practices among market operators. Overall, these changes could eventually lead to a convergence of exchange rates. Note that the other rates (including the I&E window), were not at NGN306/US$1 before this, and banks generally didn't use the official rate in their financial statements.

This is mostly a positive for the government, as dollar earnings from oil will now be converted to naira at the higher rate. It will provide a boost to revenues, which have been hit by lower crude prices.

However, individuals and businesses that rely on the exchange rate could see costs increase, which could put further upward pressure on Nigeria inflation (currently 12.2%).

In our separate strategy view we argue that there is likely further devaluation required and the risk of capital controls is not off the table as yet.