At the risk of sounding like a stuck record, the trade-weighted USD has hit a new 20-year high this morning. The same drivers remain in place, with the USD benefitting from expectations for a wider monetary policy differential between the US and other major economies. A looming energy crisis in Europe has compounded growth concerns in the region, causing investors to reprice interest rate bets for the shared bloc. Governments and economists are concerned that the maintenance of the Nord Stream 1 pipeline could take longer than expected because of the war. The adjustment of interest rate expectations for the Eurozone amid growing recession fears has seen the EUR-USD flirt with parity this morning. Should growth concerns in the Eurozone intensify today, we will almost certainly see the EUR-USD break below 1.00. Note that The EUR-USD hasn’t traded at parity since the early 2000s. While much of the focus is centred on the EUR-USD this morning, it is worth pointing out that the dollar strength is broad-based, with the greenback firmer against almost all G10 and emerging market currencies this morning.

US Treasuries are keeping their rally going this morning, with investors favouring the safety of US government bonds despite the fact that inflation remains so high and could have accelerated even further in June, according to the estimate for tomorrow’s reading. The Fed seems to have done its job in convincing investors that it will hike aggressively enough to quell inflation, even if this comes at the cost of plunging the US economy into a recession.

Equity markets are also looking very uncertain at the moment, especially ahead of earnings season, which kicks off this week. As a result, USTs are looking attractive with a yield of 3% and the added bonus of potential capital appreciation gains once we see inflation start to head lower. However, this does not mean that the volatility we have seen in rates markets is nearly over. Any topside surprise in inflation figures going forward could still lead to some notable selling pressure.

Ethiopia: Headline inflation in Ethiopia slowed for the first time in four months in June. Specifically, inflation slowed to 34% y/y from 37.2% y/y as food prices increased at the slowest pace since August. Food-price growth slowed to 38.1% from 43.9%, while non-food inflation was little-changed at 28.4%. While inflation slowed in June, it remained elevated near a 9-1/2 year high, and risks remain tilted to the upside in the coming months after the government increased the cost of diesel by 38% last week and said it plans to halt fuel subsidies.

Ghana: A Bloomberg report quoting sources familiar with the matter suggests that Ghana has deferred this week’s mid-term budget review until initial meetings with the International Monetary Fund for an economic program have been completed. The mid-term budget is now likely to be tabled this month, with the outcome of the talks with the Washington-based lender potentially having a significant influence.

Mozambique: The Mozambican Ministry of Economy and Finance (MEF) in a document, has recommended that the country reduces its borrowing from domestic banks and instead resort more to concessional loans from abroad. The MEF recommends “an incremental increase in the proportion of external financing from 30% in 2022 to 55% in 2025, corresponding to a gradual reduction of internal financing from 70% to 45%” in the same period. Moreover, “The external component should be entirely and exclusively covered by concessional loans,” while in the internal portfolio, the proportion of short-term Treasury Bills (BT) “will be progressively reduced from 35% in 2022 to 15% in 2025.” The MEF estimates public debt hit $13.9bn in 2021, an increase of 71% compared to 2014. External debt increased by 47% in these seven years, while internal debt has increased by more than 220% in the same period and today represents a quarter of total public debt.

Uganda: Against the backdrop of the coronavirus pandemic and the war in Ukraine, Uganda reportedly missed its 2021/22 revenue target by 3%. Specifically, the Uganda Revenue Authority (URA) reported that revenue collection in the year through June was UGX 21.7trn, the most on record but lower than the target. Meanwhile, the collection target for the 2022/23 fiscal year has been set at UGX 25.15trn. In order to maximize revenue collection and close revenue leakages, the URA said it will implement intelligence and technology.

Africa: Campaign group Debt Justice said in a report released yesterday that African countries' debts with China are a third of what they owe non-Chinese private lenders, while interest rates are just over half. According to the analysis by the campaign group, Chinese public and private lenders accounted for 12% of the continent's $696bn external debt in 2020, while 35% was owed to other private creditors. Meanwhile, the average interest rate on debt payments owed to China last year was 2.7%, compared to 5% on non-Chinese private debt. The report further noted that six countries, Angola, Cameroon, Republic of Congo, Djibouti, Ethiopia, and Zambia sent over a third of debt payments to Chinese lenders in 2021, while other private creditors accounted for over 33% of payments in 12 countries. There has been growing debate about the role of China and its lending practices to many African nations. Many countries have got into debt trouble, and Western officials have called on China to speed up restructurings.

The Zambian kwacha has enjoyed a solid start to the third quarter, outperforming its peers in the Africa FX complex. The kwacha has gained around 2.48% against the USD on a quarter-to-date basis and is ranked as the best performing African currency out of the 23 tracked by Bloomberg. The kwacha's gains are more than three times higher than that of the next best-performing currency, the Mauritian rupee, which has gained around 0.73% in the period under review. Meanwhile, Southern African peers such as the South African rand and Botswana pula have been on the back foot, with the former ranked dead last in terms of performance. 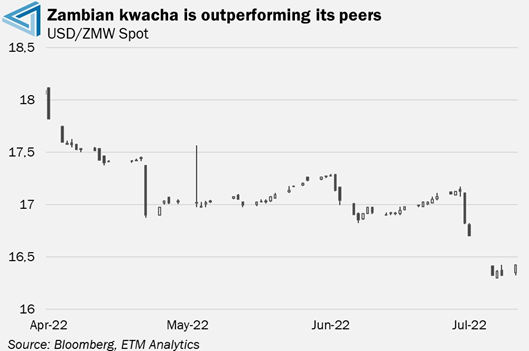 The outperformance of the kwacha can be attributed to higher foreign exchange inflows from mines, continued central bank intervention, and positive investor sentiment in the economy. Sentiment in Zambia has been bolstered by ongoing credit talks and concrete signs of fiscal reform. It is worth noting that the kwacha has also been resilient on a year-to-date basis and is one of only a handful of currencies to record gains.

On a real effective exchange rate basis, the kwacha is significantly overvalued, suggesting room for further gains may be limited. That said, securing IMF board approval and undertaking debt restructuring in the coming months could provide a catalyst for further strength in the local currency.

The perfect storm has hit Nigerian Eurobonds. Global risk sentiment continues to deteriorate amid rising global growth concerns, while domestic inflation runs hot, bolstering bets that the Central Bank of Nigeria will need to raise interest rates further, and oil prices have pulled back from their recent peaks. This comes against growing fiscal concerns as debt servicing costs continue to rise.

Nigeria’s 10yr Eurobond yield has surged in recent months, climbing more than 580bps since the start of the year to close yesterday’s session at 13.93%, levels last seen during the height of the Covid-19 pandemic. Taking into consideration where the 10yr US Treasury yield is trading, Nigerian Eurobonds are effectively trading at levels associated with a country in fiscal distress. As of yesterday, Nigeria’s fiscal premium stood at 1094bps. 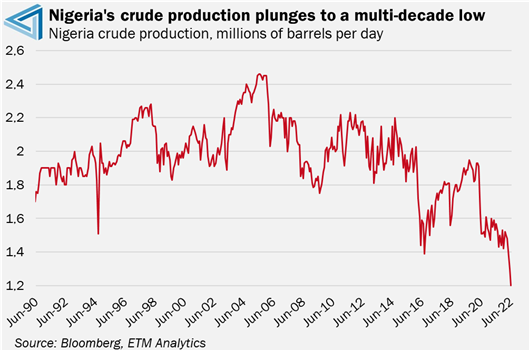 While oil prices are still lofty when compared to historical levels, international oil prices have pulled back from their recent highs as growth concerns intensify. The correction lower in international oil prices comes amid falling domestic production. The latest data from OPEC shows that Nigeria produced on average 1.2mn barrels per day in June, its lowest output since at least the 1980s and more than 50% lower than its peak output levels in the early 2000s.

While Nigeria’s crude production is declining, the country is benefiting from the elevated global crude prices. That said, the positive impact of high international oil prices has not been enough to offset concerns relating to the fiscal impact of tighter global monetary policy conditions and rampant domestic inflation as Nigeria’s Eurobond yields continue to blow out. Going forward, with the Fed expected to remain steadfast in its fight against inflation and growth concerns weighing on the outlook for oil, the bearish bias in Nigerian Eurobonds is likely to persist. Add to this mounting political uncertainty as we get closer to the general elections.

Commodity prices have fallen from record highs. However, they still remain well above pre-pandemic levels. With the US dollar continuing its bullish trend and rising fears of a global recession, we have seen commodity prices come under some pressure. The Bloomberg commodity index has fallen by around 18% since its highs in June. While commodity prices have come under some selling pressure recently, since the start of Covid-19, the commodity index has increased by 95%. Therefore, the recent declines do not erase the massive increases that we have seen over the last two years. 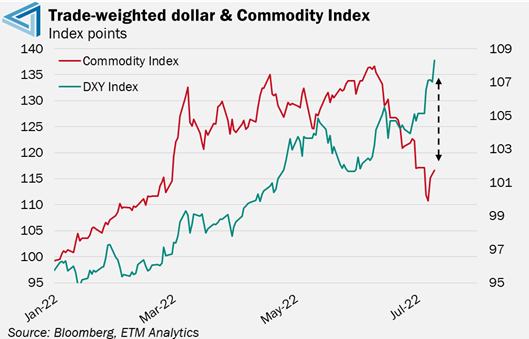 In the last few weeks, the correction lower in commodity prices has been driven by global recession concerns. The increase in commodity prices since the start of Covid-19 has been a function of supply-side concerns. Going forward, the question is whether growth concerns will continue to be offset by supply issues.