Nigerian Eurobonds are no longer benefitting from high oil prices

The bearish bias across core bond markets remained intact yesterday as traders squared up positions ahead of the potentially pivotal Jackson Hole Symposium tomorrow, where the Fed is expected to reinforce its stance on fighting inflation. The 10yr UST yield hit an eight-week high after climbing 6bps on the session, while the shorter-dated 2yr UST yield, which is widely used as a proxy for interest rate expectations, rose by 9bps to a 10-week high. Bund yields continued to spike as concerns over the energy crisis continue to add to inflation expectations. Since the start of the month, the 10yr Bund yield is up 55bps, while the 2yr yield has legged 65bps higher. Heading into the European open, the bearish bias seems to have tempered with US Treasuries relatively steady overnight. Market focus remains centred on the all-important Jackson Hole Symposium tomorrow, where Fed Chair Powell is expected to provide some forward guidance on the path of interest rates in the US.

This morning the USD appears to be coming under pressure, and it is difficult not to link it to Biden's decision to forgive student loans and the upcoming Jackson Hole symposium. The message from the Fed might be softened as economic headwinds blow harder, while the former will impact negatively on the fiscus. There is a lot of tightening already priced into the USD, arguably too much. It is unlikely that the US economy will escape the downturn in the UK, Europe and China. While the tide will eventually turn positive, central banks are convinced they need to tighten further, and recessionary conditions still seem likely. Furthermore, the USD is expensive and could do with some correction. In response, the EUR-USD is flirting with parity again, while the GBP-USD is consolidating above the 1.1800 level.

Botswana: The Bank of Botswana will deliver its latest verdict on its benchmark rate today. In June, the bank lifted its new benchmark rate by 50bp to 2.15%, bringing the cumulative hikes since April to 101bps as it sought to moderate second-round effects and anchor inflation expectations. Since the last meeting, inflation has continued to accelerate, reaching a multi-year high in July. The reduction in the VAT rate from 14% to 12% announced at the end of July might ease inflation pressures going forward. That said, inflation remains notably above the upper band of the central bank's 3-6% target range, suggesting risks of further policy tightening exist.

Ethiopia: Ethiopia's creditors' committee said it is awaiting a program between Ethiopia and the International Monetary Fund (IMF). According to a statement, the creditor's committee for Ethiopia said it was looking forward to ongoing discussions between the country's authorities and IMF staff in the context of applying for an IMF program. An IMF program is one of the requirements for debt restructuring under the G-20 Common Framework. The creditor committee also recommitted to granting Ethiopia debt relief in the face of glacial progress. Ethiopia requested debt relief from its creditor governments early last year under a new G-20 framework for debt restructurings, but progress has been complicated by a 21-month civil war that began in the northern Tigray region. The Creditor committee said that it will "pursue its work to find an appropriate solution to external debt vulnerabilities of Ethiopia, in a timely, orderly and coordinated manner."

Ethiopia: Breaking a five-month truce, fighting erupted between government forces and Tigrayan rebels in northern Ethiopia yesterday. The renewed warfare was unleashed after both sides repeatedly blamed each other for the lack of progress in efforts to hold negotiations to try and end the 21-month conflict. The resumption of hostilities is set to exacerbate the humanitarian crisis Ethiopia is facing. Last week, the UN's World Food Programme said that nearly half of the population is suffering from a lack of food.

Kenya: Kenya Airways Plc CEO Allan Kilavuka yesterday said that the airline is looking to reduce jet leasing costs by more than a third as it targets breakeven by 2024. According to Kuilavuka, negotiations with lessors have so far led to a 19% reduction in overall rental costs. The move is part of a wider restructuring following years of losses and state bailouts. That said, the airline, which the Kenyan government has a 48.9% stake, expects National Treasury to settle debts owed to lessors. Meanwhile, financial data released yesterday showed that Kenya Airways Plc reported a loss of KES9.89bn ($82.4mn) in the six months through June compared with KES11.5b a year earlier. Revenue during the period grew 76% as the number of passengers surged 85%, bouncing back from the pandemic-era slump in air travel.

Mauritius: Finance Minister Renganaden Padayachy yesterday projected the recovery in tourism and a rebound in the export-orientated manufacturing sector to drive an expansion in the country’s economy this year. Padayachy forecast growth to cross 7% economic this year and said that the government is expecting 1mn travellers in the first full year since borers were reopened after the coronavirus pandemic lockdown, up from 179,780 tourists in 2022. The rebound adds to improved sales of manufactured goods, the second-largest source of foreign currency. Tourism contributes more than 20% of GDP.

Nigeria: Speaking at the launch of Nigeria’s energy transition plan, Vice President Yemi Osinbajo said that the government seeks to raise an initial $10bn in funding to implement its energy transition plan ahead of the COP27 climate talks later this year. Osinbajo added that Nigeria needs $10bn a year and a total of $410bn to deliver on its net-zero targets by 2060. Nigeria has already secured a $1.5bn pledge from the World Bank and is in talks with the US Export-Import Bank for an additional $1.5bn. Nigeria’s energy transition plan is designed to lift 100mn people out of poverty in ten years, drive economic growth, bring modern energy services to the people, and manage the expected long-term job losses in the oil sector due to global decarbonization.

Signs of selling pressure on the Ghanaian cedi showed no sign of easing as the currency plummeted to a fresh low yesterday. The cedi weakened to close just shy of 10 per dollar, the lowest level since on in almost 30 years worth of data. Yesterday’s losses added to the year-to-date drop of over 60%, cementing the cedi’s position as the worst-performing African currency. The continued weakness in the cedi suggests that last week’s 300bp emergency rate hike by the Bank of Ghana (BoG) is yet to have a meaningful impact on arresting the slide in the currency. 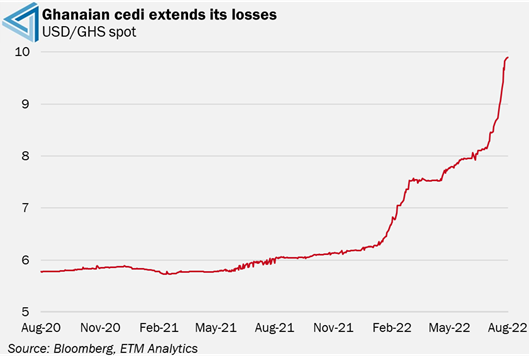 Subdued investor confidence amid Ghana’s deteriorating macroeconomic outlook and dollar shortages amid declining foreign exchange reserves are some of the factors that have weighed on the cedi this year. Demand for foreign exchange has not been met by supply, and yesterday’s FX auction provided further evidence. Demand for hard currency outstripped supply, with total bids coming in at $109.5mn, while the BoG could only issue $25mn. Foreign exchange supply may, however, increase in the coming days. Ghana’s Information Minister said that the government plans to inject around $2bn into the economy shortly to help strengthen the cedi. According to the minister, around $750mn from an agreed Afreximbank loan will be paid into the BoG this week, while a cocoa-syndicated loan will add $1.3bn.

While the above-mentioned measures could ease some pressure on the cedi, the currency’s biggest detractor comes from the fiscal side. Against this backdrop, securing a programme with the International Monetary Fund as soon as possible remains vital. Protracted negotiations risk further cedi weakness, a decline in reserves, and a potential deficit monetization by the BoG.

While the Eurobonds of most oil-producing nations continue to benefit from elevated international oil prices, the positive impact of high oil on Nigerian bonds has broken down. Our latest study found that the correlation between international oil prices and Nigerian Eurobonds has turned positive (+0.3) after being strongly negative for much of the pandemic era. Note that a strong negative correlation (-0.75 or less) implies that when oil prices trade higher, Nigerian Eurobond yields trade lower (positive impact) or put differently, Nigerian bonds strengthen when oil prices rise and visa versa. 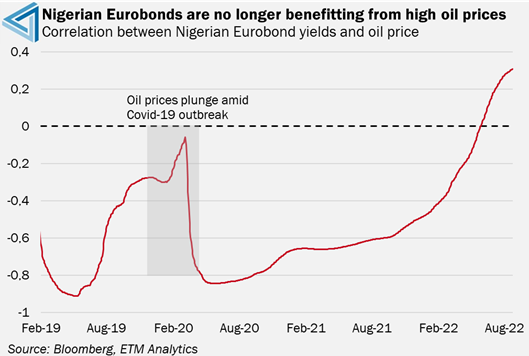 Interestingly, albeit relatively weak, the correlation is now positive, implying that higher oil prices are net negative from Nigerian Eurobonds. While, at first glance, this may go against the grain, given that Nigeria has historically been Africa’s primary oil producer, a deep dive into Nigeria’s oil sector shows that the country’s oil production has plunged 1.2mn barrels per day, the lowest level in five decades. In percentage terms, Nigeria’s oil production is down more than 50% from its peak in 2005, when production reached 2.46mn bpd.

Furthermore, it is worth noting that Nigeria hasn’t been able to meet its production quota since June 2021 as production issues persist. Nigeria’s oil sector has slipped into a structural decline following years of ill investment and the growing insurgency in the delta, where most of the country's oil reserves lie. Due to the marked decline in oil production, Nigeria is not able to fully capitalize on the global energy boom and is therefore forfeiting much-needed tax revenues and hard currency inflows.

Macroeconomic: Congestion at US ports could drive up global shipping prices

Exporters in Southern Africa are struggling to move their cargo to the US due to backlogs and a surge in demand for refrigerated cargo shipping that is impacting capacity. The peak season for ocean freight is underway, and it seems as though trade volumes have been picking up, which is resulting in backlogs at ports in the US once again. As we move into the final few months of the year, demand for shipping goods will likely continue to increase, and logistic companies will be put under more pressure. 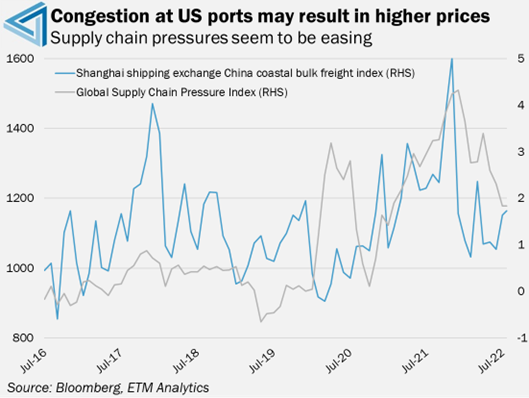 In the US, land capacity issues are creating port and terminal congestion. A lack of railcars and the unavailability of truckers and trucks have impacted all trade participants. The concern is that this may result in a longer dwell time for containers and higher costs for importers and exporters.

African industries have already started to feel the impacts of the US backlogs as many rely heavily on the US for exports. While still elevated compared to pre-pandemic levels, shipping prices have recovered from the record highs we saw during the pandemic. That said, we expect shipping prices to remain high as backlogs start to weigh on supply chains once again.