Global bonds rallied yesterday for the first time in a week, as economic growth concerns were revised following some soft US PMI figures and mixed earnings results. Bear flattening was the order of the day, with the belly to back-end of the curve outperforming and the US 2v10 spread inverting further back towards the -70bp mark. The flattening pressure was less noticeable for the German and UK bond curves, although gilts outperformed on the day as data showed that the UK could already be in a shallow recession, with the composite PMI sliding to its lowest since the pandemic. These global growth concerns will keep bonds supported over the near term, especially with earnings calls set to continue that will likely flag concerns over the outlook going forward.

Meanwhile, bond traders in the US are hedging against the possibility that the next Fed rate hike, due 1 February, will be the last in the cycle. SOFR options are being used to hedge against dovish scenarios that will stand to benefit if rate hike risk premium is priced out of the swaps market. These trades could gather some momentum over the next week or so if the US data continues to disappoint. At the moment, the swaps market is pricing in a 25bp hike for this upcoming meeting and a fairly high chance of another at the March FOMC.

Mozambique: The Bank of Mozambique will today deliver its latest verdict on its interest rates. Policymakers at the central bank are set to keep the MIMO rate unchanged for a second straight meeting in order to assess the impact of previous increases. While inflation in Mozambique remains in double-digits, it has slowed since September.

Africa: The African Development Bank, in a statement on Tuesday, estimated that farmers in Africa will need as much as $65bn in loans annually to produce enough food to curb imports and cushion their economies from external shocks. The continent imports over 100mn metric tons of cereals at an annual cost of $75bn. According to the lender, recent spikes in inflation, including increases in food prices following Russia’s invasion of Ukraine, further, demonstrate Africa’s over-reliance on imports of food staples and agricultural inputs. The lender also noted that Africa’s food and agriculture market could increase from $280bn annually to $1trn by 2030. Achieving this target will require significant new investments and the removal of barriers to agricultural development.

Nigeria: President Buhari on Monday opened a billion-dollar Chinese-built deep seaport in Lagos. The seaport is expected to ease congestion at the country's ports and help it become an African hub for transshipment, handling cargoes in transit for other destinations. According to China's Ambassador to Nigeria, "this is a transformative, game-changer project. This could create at least 200k jobs." President Buhari has made building infrastructure a key pillar of his government's economic policy and hopes this will help his ruling party win votes during next month's presidential election.

Ghana: In a poll conducted by Reuters, the Bank of Ghana, battling surging inflation, is expected to deliver another significant rate hike at a meeting later this year, with the country's currency and public finances still under pressure. The median forecast from a survey of eight analysts taken January 18-23 points to the BoG raising rates by 175bp to 28.75%, with only two expecting the bank to hold at 27.0% and the rest opting for a hike in the 100-400bp range.

Kenya: Kenya is set to create a new body to privatize state-owned enterprises. According to a draft bill published on National Treasury's website, the privatization authority will be established to oversee the sale of government stakes in state entities and will replace the existing privatization commission. In October, President Ruto pledged to amend or repeal the country's privatization laws to enable the listing of as many as ten state-owned companies within 12 months. Ruto, at the time, was quoted as saying, "we have a bad privatization law. Instead of helping us with privatization, it has stalled the whole privatization agenda."

Uganda: In a key milestone as the country races to meet its target of first oil output in 2025, Uganda has commissioned the first of its four planned oil drilling rigs and will start drilling the first production well. Uganda discovered commercial reserves of petroleum nearly two decades ago, but a lack of infrastructure like a pipeline has repeatedly delayed production. However, the country is now developing a crude export pipeline and a domestic crude refinery that will help commercialize the country's oil resources and trigger significant foreign exchange inflows.

Forex: Selling pressure on the cedi re-emerges amid concerns over debt restructuring

The final month of 2022 saw the Ghanaian cedi embark on a world-beating rally following the announcement of a preliminary $3bn IMF deal. The cedi gained almost 30% against the USD in December, helping trim its 2022 losses to around 39%. However, those gains have proved fleeting for the cedi, with currency again under pressure at the start of 2023. The cedi has already recorded double-digit losses on a year-to-date basis and is currently ranked the worst-performing African currency out of a basket of 23 currencies tracked by Bloomberg. 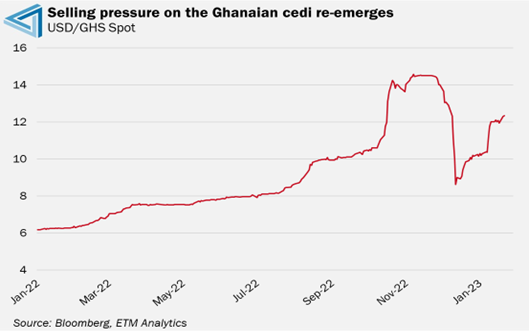 Ghana's fundamental backdrop remains fragile. A deteriorating macroeconomic outlook against a backdrop of tightening global financial conditions, weighing on dollar inflows at a time demand remains high, are some the factors weighing on the cedi. Risks for further weakness exist if the government does not secure higher participation in its domestic debt exchange program. The government has extended the deadline for registration for its debt exchange until the end of this month and added incentives for bondholders to participate, but it still needs greater buy-in. If the exchange fails, it would make it near impossible to reach the targets needed to receive the funds from the IMF.

Looking ahead, the outlook for the cedi ultimately hinges on a successful debt restructuring and securing the board approval for the IMF program. These factors will improve the country's fiscal position, boost the balance of payments and support the cedi. The cedi is deeply undervalued on a real effective exchange rate basis, suggesting that there is room for a meaningful recovery should Ghana's fundamental backdrop improve significantly in the coming months. However, this undervaluation does not protect it from further losses if the debt restructuring does not go well.

Botswana announced the details of its first bond auction for this coming Friday last week. The Ministry will be auctioning off BWP400mn split evenly between the 5.5% 2027 bonds and the 5.3% 2043 bonds. There will also be the usual T-bill auction of a total of BWP2bn, with BWP1bn to be offered of 364-day bills, while the remainder will be evenly split between the 182-day and 91-day bills. 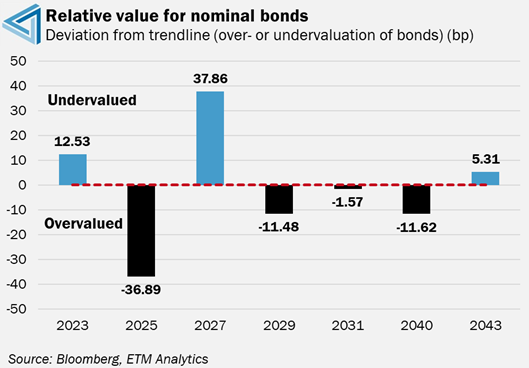 According to our relative valuation model, which uses modified duration and current yields to determine the under or overvaluation of Botswana’s bonds, both the 2027 and 2043 tenors are currently undervalued, with the degree larger for the 2027. The model shows that the 2027 tenor is undervalued by almost 38bp, while the longer-dated 2043 tenor is undervalued by a more modest 5.3bp. The fact that the 2027 offers a higher coupon, combined with its high degree of undervaluation, suggests that demand for the tenor should be high at this week’s auction. Recall that at the November auction, the 2027 attracted demand of BWP250mn, while the government only allotted BWP25mn at a yield of 7.5%. Its current yield in the secondary market is around 8.08%, but the auction could see strong enough demand that clearing yields could come in slightly below when-issued yields.

The Nigerian central bank delivered an outsized rate hike yesterday, raising the country’s key interest rate by 100bps to 17.5%. According to Bloomberg, only one of the twelve economists surveyed by the data provider expected a hike of 100bps, and six of the economists were only expecting a 50bps hike. 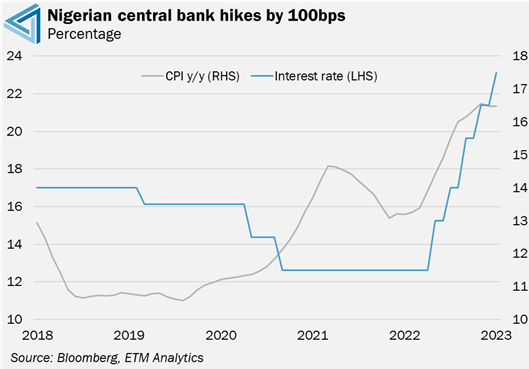 However, the MPC’s voting pattern was seen as being very hawkish, with seven of the twelve members voting for the 100 bps hike, four members for a 50 bps hike and only one member for a 150bps hike. According to central bank governor Godwin Emefiele, the aggressive hike was crucial as inflation has still been running hot and therefore, a higher interest rate is necessary to rein in inflation. Currently, real rates are still negative by 380 basis points, indicating the need for further rate hikes to bring demand down enough to ease inflationary pressures.

While the annual inflation rate fell to 21.3% in December, the core measure, which reflects underlying price pressures, and month-on-month price growth, accelerated at the back end of 2022. The latest inflation data and central bank decision shows that inflationary pressures in Nigeria have not eased sufficiently for the committee to change its hawkish stance. We will be keeping a close eye on the monthly inflation in the coming months as it should help to give us a better idea of the Nigerian central bank's path forward in terms of coming interest rate hikes. However, risks are skewed to inflation remaining elevated and more rate hikes being needed down the line.