Nigerian bonds under pressure as inflation continues to soar

Last week's non-farm payrolls jobs report was poor, missing expectations by miles. It highlighted that expectations of a very rapid recovery in the US economy were still some way off and that the recovery could be both uneven and erratic. That might change through H2 2021, but for now, that appears to be the case. It has offered the authorities enough ammunition to persist with current stimulus efforts. As a result, the USD came in for huge punishment on Friday, allowing several riskier currencies to scale fresh highs and further raise the probability that the US will experience some kind of an inflation episode later this year. Technically, the USD may be oversold in the short-term, but there is no clear-cut evidence that the USD is about to rebound, other than the fact that the USD index is now running into tough support. The bias for now remains overwhelmingly against the USD, even though the desire to sell USDs from these levels may have dissipated somewhat.

In the commodity space, copper is printing new highs almost daily at the moment. The red metal added some 3.17% on Friday to close the week at $10417/tonne. Base metals in general remain supported given the thoughts of a recovery in global economic growth post the COVID-19 pandemic. We also have the Central Banks’ remaining committed to keeping rates lower for longer which will support the growth narrative. What we would like to point out, is that exceptionally low rates create asset price distortions which can correct should monetary policy normalise in the future.

Crude futures are advancing this morning while gasoline futures in the US surge following a cyberattack on a key pipeline in the US. There is still no plan to restart the pipeline, forcing traders to seek alternative cargoes from Europe and Asia. This has seen Brent front-month futures rise to around $68.66 per barrel this morning, while WTI futures trade near $65.20.  In response to the attack, the US has lifted various limits on the transport of fuels by road to ease any supply shortage fears. The fact that a restart date for the pipeline is unknown means that the near-term outlook for refined products remains bullish, especially as demand will rise over the coming weeks as the US driving season kicks off. Crude’s outlook also remains bullish in the near term, but there is still some general uncertainty over the global economic recovery, which will limit gains and should keep the $70 per barrel mark as the line in the sand to the topside for Brent.

South Africa: Political risks in South Africa will likely remain afoot with recently suspended ANC officials unlikely to step down without a fight. The latest news over the weekend was that ANC Secretary-General Ace Magashule was excluded from a national executive committee (NEC) meeting, reportedly causing a stir amongst officials during the meeting organised to consider his own suspension.

Ethiopia: The Ethiopian government may delay the elections for the second time in less than a year as they struggle to conclude preparations, including difficulties in registering voters. According to the head of the National Election Board of Ethiopia, Birtukan Mideksa, about 31.7mn voters of some 110mn people in the country have so far been registered. Given the ongoing challenges, which include the persistent COVID-19 pandemic and civil war in Tigray, it is becoming more unlikely that the June 5 election date will be achievable.

Uganda: Ugandan lawmakers approved spending plans of UGX 44.7trn or about $12.6bn for the 2021/22 financial year. This is about UGX 714bn less than the current budget. The smaller budget was partly a result of lower external funding. The government said that it is planning to draw at least UGX 200bn from its petroleum fund to help finance the construction of roads in its oil-rich region. The construction of the roads in this region is vital as Uganda prepare to start oil exportation in early 2025.

Kenya: The Kenyan National Assembly approved the constitutional amendment bill to restructure the government and share power more equitably to help avoid a repeat of a violent election dispute. 224 voted in favour of the Building Bridges Initiative, while 63 rejected it. The Building Bridges Initiative calls for the reintroduction of the role of prime minister and two deputies and creating the position that recognises the head of the opposition. While President Kenyatta and opposition leader Raila Odinga noted that the changes would provide greater political representation and end winner take all elections, a bigger government structure will raise the wage bill. The Institute of Economic Affairs of Kenya noted that the government could need more than KES 5.5bn a month to maintain the larger structure.

Rwanda: The International Monetary Fund (IMF) reached a staff-level agreement with Rwanda on policies needed to complete the fourth review under Policy Coordination Instrument. The IMF also noted that GDP growth is forecasted to rebound to 5.1% this year off the back of the COVID-19 vaccination campaign targeting 60% of the population by the end of June 2022. The IMF said that downside risks to the growth outlook include uncertainties on duration, the impact of the pandemic, and availability of vaccines.

Egypt: According to Bloomberg, Egypt offered to reduce claims by a third for compensation from owners of the container ship that blocked the Suez Canal. Recall that the Suez Canal Authority previously demanded $900mn in compensation from the Ever Given to cover losses of transit fees, damage to the waterway during dredging and salvage efforts and for the cost of equipment and labour. The SCA is willing to reduce the claim to $600mn and also offered payment terms to owners.

The Ugandan shilling (UGX) extended its winning streak against the USD to an eighth successive week in the week ending May 7. While the UGX came under some modest selling pressure on Friday, the shilling managed to rack in gains of 0.39% against the greenback last week. The bullish run in the UGX marks the longest stretch of weekly gains since June 1993. 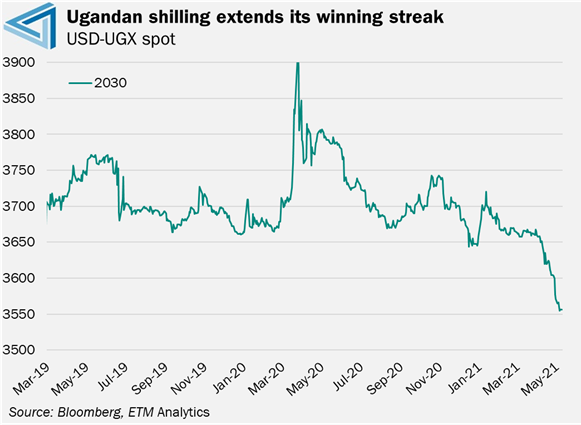 The persistent rally in the UGX was supported by offshore and month-end non-governmental inflows, lower dollar demand from importers, increases in tea and horticultural exports and remittance receipts. This comes on the back of sustained dollar weakness, a recovery in international travel and soaring commodity prices.

It has been a blood bath for Nigerian government bonds in recent weeks with yields across the Nigerian sovereign bond yield curve surging amid the persistent rise in inflation against the backdrop of mounting fiscal concerns. Recall that headline inflation in Nigeria has sky-rocketed in recent months, driven by soaring food and oil prices. For context, headline inflation accelerated to a 4-year high of 18.2% in March.

Global reflation trade driven by soaring commodity prices and expectations for a stronger than previously expected global economic recovery and rising US Treasury yields have also added to the headwinds for Nigerian bonds in recent months. Since the start of the year, the 10-year US Treasury yield has climbed by just short of 70bps to sit at a near 1-year high of 1.59%. 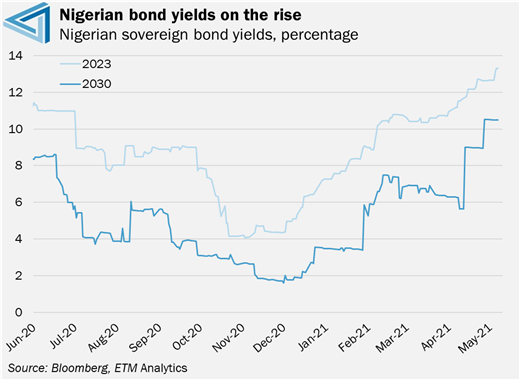 The bear flattening bias has seen the 10v2 yield spread narrow by around 100bps to 282bps. Looking ahead, with inflation risks tilted firmly to the upside amid expectations for food price inflation to remain elevated, Nigerian bonds are expected to remain under pressure in the months ahead. Heightened fiscal concerns, political uncertainty and security threats, which are weighing on domestic sentiment, will add to the bearish bias for Nigerian bonds.

In line with expectations, S&P affirmed its 'B/B' long- and short-term foreign and local currency sovereign credit ratings on Egypt on Friday evening. The global credit ratings agency also left the outlook at stable. S&P said in its rating review that the stable outlook reflects its expectation that the pressures on external and government debt metrics will be temporary and gradually decline from 2022, supported by growth in GDP and current account receipts.

S&P said that it expects Egypt's foreign exchange reserves and access to domestic and international debt markets will allow the country to cover its higher external financing needs and upcoming maturities. The agency noted that although Egypt’s external debt is expected to rise sharply as a proportion of current account receipts in the current fiscal year, which ends on June 30, the ratio should gradually decline thereafter as current account receipts recover.

On the economic front, while the short-term outlook is still rickety, S&P said that it sees strong medium-term growth prospects for Egypt, supported by the ongoing implementation of fiscal and economic reforms. The agency added that although the pandemic has slightly altered the government’s initial target of generating central government primary surpluses of at least 2% for the 2021 and 2022 fiscal years, recovering growth and lower domestic interest rates should put debt to GDP back on a downward path.

S&P noted however that Egypt's debt trajectory will be sensitive to movements in the exchange rate and inflation. Going forward, the agency said that Egypt could face negative rating action if the COVID-19 pandemic's impact on Egypt's external position and economic activity is more severe or prolonged than expected, resulting in a substantial decline in foreign exchange reserves and reduced ability to service debt and interest payments. Downward rating pressure could also emerge if fiscal slippages, higher borrowing costs, or pronounced currency depreciation prevented Egypt's government debt-to-GDP ratio from declining after 2021.