Nigerian banks are pushing into fintech and digitalisation to survive

Nigeria's banks face three main headwinds in 2022: 1) continued regulatory hurdles; 2) declining profitability; and 3) the growing threat of fintechs and telcos. The banks that succeed will be those that can amend their strategy and adapt to the new environment. In this report, we highlight two banks – Stanbic IBTC and Standard Chartered – that have done just that, moving to embrace financial technology and digitalisation.

Building its own fintech

The diversified financial holding company, Stanbic IBTC, recently announced plans to build a fintech subsidiary, subject to regulatory approvals. The development is not a surprise – we previously highlighted other Nigerian banks that are seeking new lines of business, particularly in fintech.

Stanbic IBTC’s fintech will be focused on payments, in line with GTCO and Access Bank’s plans for their own fintechs. The new subsidiary will be a payment solution service provider (PSSPs), which is a fintech that is focused on providing payment gateways and end-to-end electronic payment solutions for merchants (examples include Paystack and Flutterwave). We view the fintech business as more of an add-on to the group’s existing electronic banking offerings, rather than a completely new stream of income like its other businesses (pension and asset management, stockbroking, trusteeship and others).

There are push and pull factors that are spurring Stanbic IBTC’s interest in building a fintech. In terms of push factors, regulatory hurdles associated with traditional banking have contributed significantly to the group’s deteriorating profitability.

Stanbic IBTC has suffered the most from the Central Bank of Nigeria's (CBN) continued punitive cash reserve ratio debits; the group has an effective CRR of 56.4% (as at H1 21), the highest in the industry. 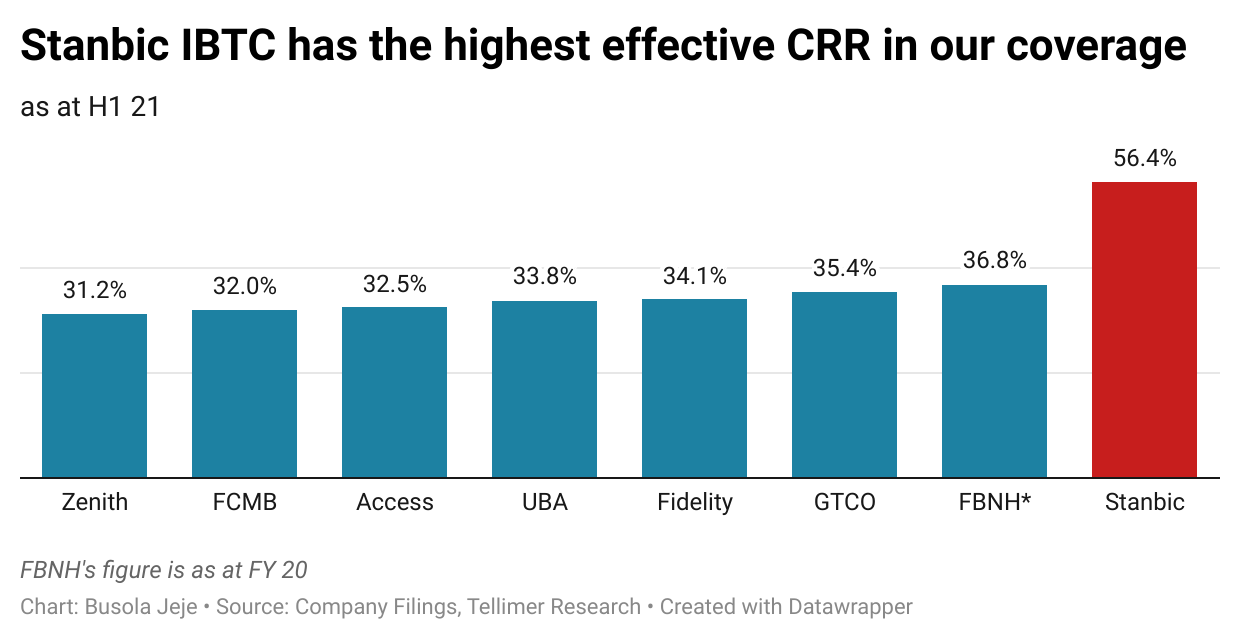 Given this harsh reality, the group has raised more expensive funding to support loan growth (CASA ratio at 69% in 9M 21, vs 88% in 2020), which further compressed its NIM. Also, the refunded CRR debits in the form of CBN special bills are of no help to margins, as they command an interest rate of 0.5% and make up c65% of Stanbic IBTC’s total investment securities.

Asides from its margins, the group recorded a significant decline in trading revenue (down 80% yoy in 9M 21), which is a significant source of revenue for Stanbic compared to peers. Overall, the group’s profitability has taken a huge hit. This gives it further reasons to build a fintech, as fintechs have the potential to be higher-margin businesses due to their lower cost of scalability, and less need for physical infrastructure and personnel, compared to a bank. 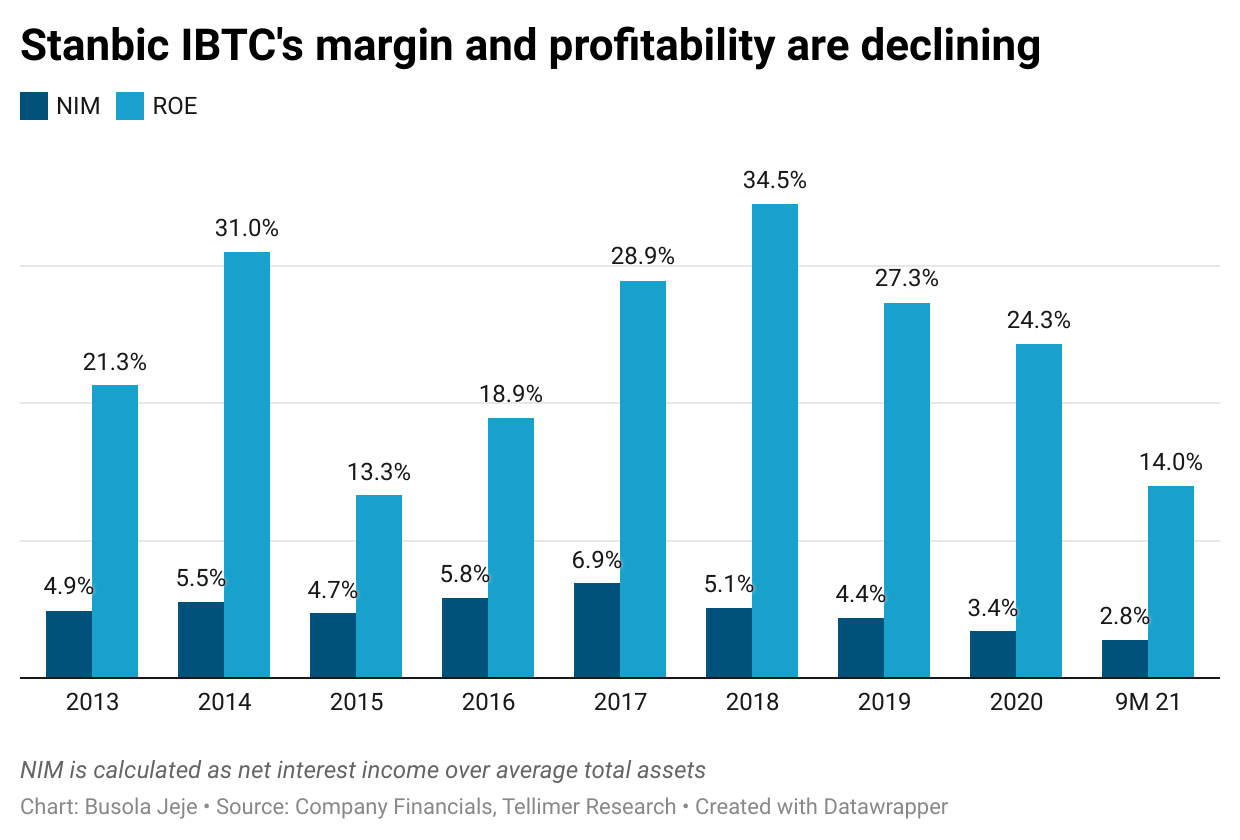 In terms of pull factors, there is also the attractive valuation African fintechs have been commanding in the funding market – even superseding the valuation of Nigerian banks. Africa is currently home to six unicorns, of which five are payments fintechs.

But Stanbic’s success depends on what it can do differently

Of all the fintech categories in Nigeria, payments has progressed the most and makes up the largest part (c28%) of the fintech ecosystem. We believe Stanbic IBTC will face intense competition, as most of the prominent payment fintechs (Flutterwave, Interswitch, Paystack, Opay etc.) have made significant headway in capturing users. The payment solution segment is rapidly innovating and becoming competitive, with the likes of Paystack and Flutterwave offering very competitive pricing for transactions, faster onboarding processes and innovative cross-border payment solutions.

The bigger banks are now building their own payment fintechs. Access Bank and GTCO possess greater payments capabilities than Stanbic IBTC. Access Bank and GTCO both processed NGN894mn and NGN653mn in e-banking transaction volumes in H1 21, compared to Stanbic IBTC’s NGN108mn. They also have a larger customer base, at 42mn and 24mn respectively, compared to Stanbic’s 2.5mn banking customers. Interestingly, Access Bank recently increased its stake in e-Transact, a payment and switching company, to 23% from 5% previously.

Once Stanbic IBTC has set up its fintech arm, it will be interesting to see how it intends to compete with the big banks and well-established fintechs that have larger existing footprints in the market. 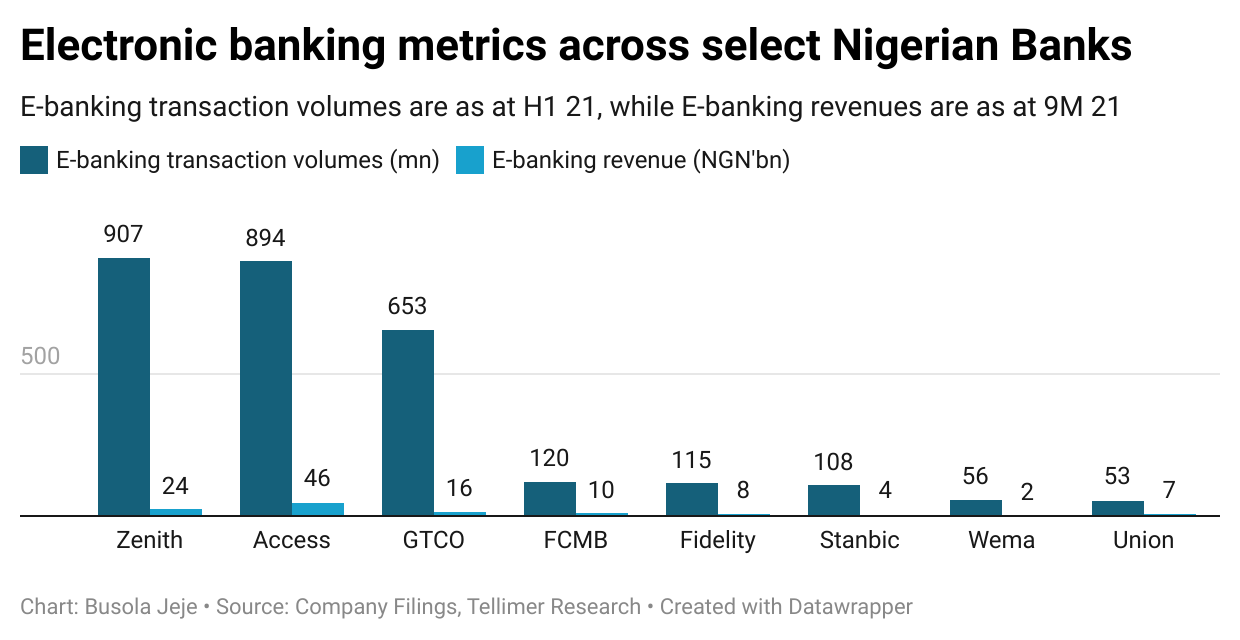 According to Bloomberg, Standard Chartered, one of the two international-affiliated banks in Nigeria, has begun shutting down 50% of its branches in order to increase its digital banking footprint. This is despite Standard Chartered only having 25 existing branches (which will be reduced to 13) across the country – far fewer than the local banks, which have an average of c300 branches. In Nigeria, Standard Chartered has predominately focused on corporates, but it is looking to target the retail end of the market by building agency networks and ramping up mobile banking.

But we believe Standard Chartered is late to the game. The tier 1 banks have a large percentage of the retail deposits and are rapidly growing their agency banking. FBNH, Wema Bank and UBA have the largest number of banking agents, with 117k, 100k and 80k agents respectively.

We expect more Nigerian banks to follow suit by reducing in-branch activity, investing in technology and growing their agency networks. This is mainly because of the issues with margins, inflationary pressure on costs and the need to compete with telcos in reaching the unbanked and underserved population.

Within our coverage, GTCO, UBA and Fidelity Bank reported the strongest growth in their digital banking franchises, with e-banking revenue up 91% yoy, 50% yoy and 53% yoy, respectively, in 9M 21.

We are most attracted to UBA (Buy, ETR: 55%). The bank's pan-African reach has aided its strong digital banking capacity, and it has the highest contribution of e-banking revenue to its non-interest income at 41%, which is positive for revenue diversification.

Contrary to peers, its margins have also remained stable as a result of the positive contribution of its other African subsidiaries. We believe this will continue to support the group's profitability, even as the Nigerian banking market continues to be hampered by regulation. 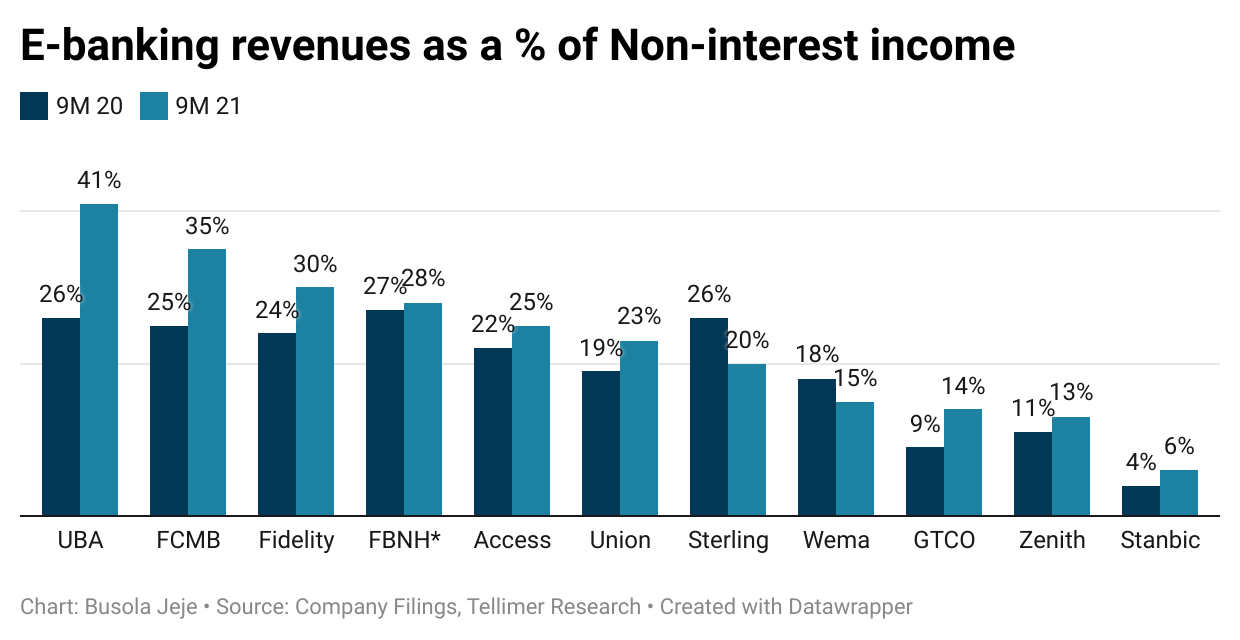