To taper or not to taper…that is the question. The broader macro backdrop remains focused on the timing of the Fed taper at which point they will start to trim bond purchases and thus injecting some $120bn worth of dollar liquidity into the market. Yesterday Chicago Fed President Charles Evans stated that the US economy is not out of the woods and challenges remain. This dovishness was offset by US Federal Reserve bank member Michelle Bowman saying that the weak August jobs report will not throw off the central bank's developing plan to trim its bond purchases later this year, according to Reuters.

It is a tale of two halves when looking at base metals at the moment. Traditionally copper is the focal point but for now the bulls have taken a liking to nickel and aluminium while copper straddles a well-worn range. Nickel has hit its highest level with the 3m LME contract up 1.73% this morning as the metal changes hands at $20540/tonne. Demand for the metal is expected to ramp up as it is used in stainless steel and in batteries which are a key component of electric vehicles. This against dwindling supplies following the hard lockdown in many nickel producing regions such as Indonesia.

This week, the USD stabilised and is set to record its first winning week in a month. The effects of the disappointing payrolls data did not last, with investors quite rightly viewing the data disappointment as transitory. Furthermore, several Fed speakers have confirmed this week that a taper is still likely before the end of the year. Inflation is already at the point where the Fed could justify acting. Any further improvement in the labour market and the Fed will feel comfortable in normalising monetary policy. Although the budget and trade deficits remain a drag on the performance of the USD, changing expectations on monetary policy still needs to be fully priced in.

Africa: World Health Africa has called for vaccine supply deals to be brought forward. The call comes on the back of Covax, reducing this year's supply forecast by more than a quarter. WHO Africa Director Matshidiso Moeti was quoted as saying, "it means we have to sustain prevention measures, work very hard to obtain vaccines and really advocate strongly for the promises that have been made by wealthier countries to be brought forward. It is urgent now in Africa to catch-up in vaccinating its countries." Moeti added that a shortage of shots is a bigger problem than vaccine hesitancy and that the continent is going to fall short of 50mn doses needed to reach 10% vaccine coverage in Africa by the end of September. A shortage of vaccines and a slow rollout will ultimately weigh on the continent’s recovery prospects.

Angola: Economic Coordination Minister Manuel Nunes Junior yesterday said that Angola's economy remains "too vulnerable" to external shocks in the form of fluctuations in global oil prices. According to the Minister, the oil sector accounts for more than 90% of Angola's foreign exchange, and that the country "needs to develop its oil sector to finance the diversification of the economy." Note that Angola continues to invest in the oil sector to counter a decline in production.

Ghana: S&P is later this evening expected to deliver a credit rating status update on Ghana. In September last year, S&P lowered its long-term foreign and local currency sovereign credit ratings on Ghana to B- from B, six levels below investment grade citing mounting fiscal challenges in the wake of the coronavirus pandemic. Meanwhile, the stable outlook according to S&P balanced risks from fiscal and external financing pressures on the country's strong medium-term economic growth prospects. The agency said it could lower the rating further in the next 6 to 12 months if Ghana's fiscal metrics deteriorate further due to recurring wide fiscal deficits or the materialisation of contingent liabilities in the financial or energy sectors. Moreover, the agency said that downward pressure in Ghana's rating could also materialise should external pressures build.

Mali: The World Bank has indicated that it has resumed disbursements to Mali. According to the Washington-based lender, all requests to access funds and operations resumed on September 7, and budget support requests will be evaluated on a case-by-case basis. Note that the World Bank paused payments to operations in Mali in June following a military coup, the second in Mali in nine months.

Morocco: In provisional results announced early yesterday, Morocco's long-ruling Islamists suffered a crushing defeat in parliamentary elections as voters frustrated over unemployment and corruption in the North African country threw their weight behind a party close to the royal palace. With most ballots counted, the results pave the way for the king to appoint a new prime minister and hand him a compliant legislature to drive home his 15-year plan to bridge economic inequality and boost job creation. The outcome has been welcomed by investors as a return to a more market-friendly government in a country that's developing its position as an automotive manufacturing and trade hub on the doorstep of Europe.

Uganda: The Finance Ministry yesterday forecast the debt to GDP ratio to widen to 53% in 2022-23 from an estimated 52.7% at the end of the current fiscal year and 49.9% in the previous year due to COVID-19 spending. The ministry added that the government continues to borrow on favourable terms, and spending is focused on projects that are likely to boost productivity. Meanwhile, economic growth in 2022-23 is projected to rebound to 6% from 4.2% this financial year and potentially expanding by 7% in the medium-term.

Mozambique: Some positive news out of Mozambique, the country’s armed forces, with the help of Rwanda and SADC, the forces have reclaimed nearly all areas that were seized by militants in Cabo Delgado province, according to President Filipe Nyusi. The President noted that as peace is being restored in the region, some locals are returning to their homes.

Although Egypt’s real interest rate has compressed in recent months, it remains one of the highest in the world. Note that Egypt’s high real interest rate bolsters Egypt’s appeal as a favourite carry trade destination for international investors. Inflation data released yesterday showed that Egypt’s urban consumer inflation accelerated further in August, coming in 5.7% y/y from 5.4% y/y in the month prior. This was the fastest pace of price growth in the economy since November 2020 and marked the third straight month that inflation has risen. On a month-on-month basis, inflation slowed to 0.1% from 0.9% in July. Meanwhile, core inflation which strips out volatile and regulated items rose to 4.5% in August from 3.6%. 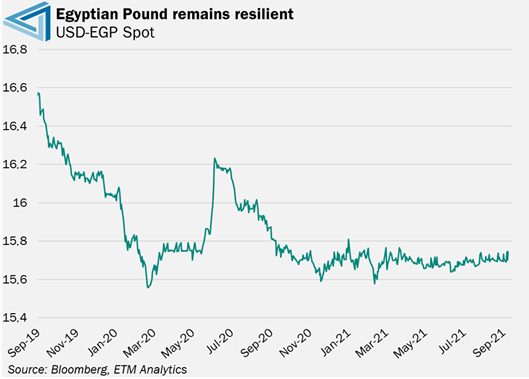 Details from the inflation report showed that food prices which, account for the largest component of the inflation basket, rose by 6.6% and together with unfavourable base effects, underpinned the surge in the headline reading. While inflation rose further in August, it remained at the lower end of the central bank’s 5% - 9% target range. Policymakers are nevertheless expected to keep the benchmark range unchanged at next week’s meeting amid concerns of the risk of global inflation and the potential tightening of global monetary conditions. In an interview yesterday, Finance Minister Mohammed Maait indicated that inflation was “transitory” and that once the spike in global prices eases, inflation will start to ease.

While the increase in inflation has seen Egypt’s real rate (Policy rate – CPI) narrow to 2.55%, it remains competitive and supportive of the Egyptian Pound. With the CBE expected to maintain a prudent monetary policy stance throughout the year and inflation anchored within the target range, the EGP’s is likely to remain resilient over the next 6-12 months.

After announcing earlier this year that it will plug part of its budget shortfall by tapping the dollar bond market, Nigeria’s Finance Minister Zainab Ahmed said in an interview that the country would issue $3bn worth of Eurobonds in the second week of October. Recall that the government approved to raise $6.1bn from foreign markets this year. In her interview with Bloomberg on Thursday, Finance Minister Maait said that Nigeria is looking to raise half of that in the Eurobond market and the other half from bilateral and multilateral sources. The Minister added that depending on how the Eurobond sale next month goes, the government might sell more. 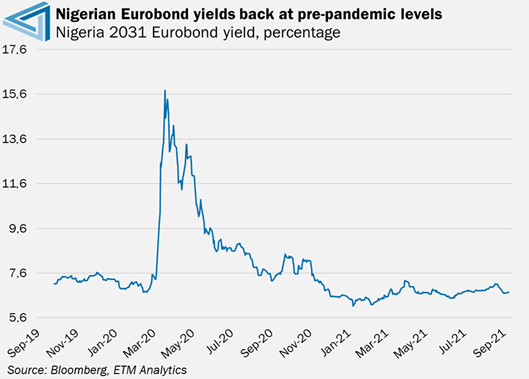 Note that Nigeria has refrained from issuing external debt since 2018 after oil prices tanked, slashing government revenues and increasing the proportion of income it has to repay interest on its debts to above 70%. Finance Minister Ahmed said that the government is now working to reduce its debt-service burden by increasing revenue, restructuring its debt portfolio through the conversion of expensive short-term notes into longer tenors and also reducing its overall borrowing.

The funds raised from the Eurobond sale will go towards financing projects planned in the 2021 budget and to shoring up the country’s foreign exchange reserves. Nigeria’s foreign currency reserves have fallen by more than 30% from their peaks in 2018 on the back of lower oil prices and production. Oil prices have however rebounded this year, which should help prevent a further slide. Finance Minister Ahmed said on Thursday that expenditure plans have been prepared for a worst case scenario of oil prices falling to as low as $40 a barrel next year. We expect oil prices to remain buoyed well above the $40/bbl mark next year. Going forward, while we are likely to see further fiscal slippage next year, it must be noted that besides for the country’s massive debt servicing bill, fiscal dynamics in Nigeria are better than many of its African peers.

A report published by the Kenya National Bureau of Statistics on Thursday showed that the non-traditional sectors, including the communications sector, are gaining prominence in the East African nation’s economy. Following the revision to its national accounts, the contribution of traditional sectors such as farming to Kenya’s economy has plunged. 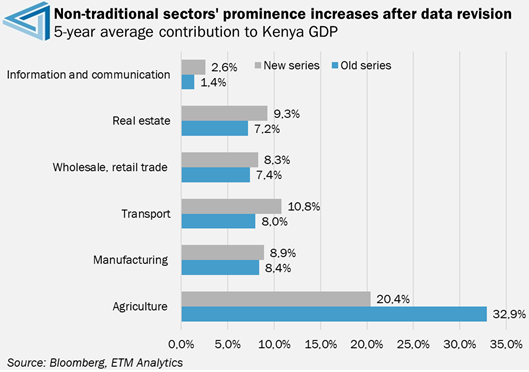 Specifically, the contribution of agriculture, forestry and fisheries shrank to an average of 20.4% from 2015 through 2019, compared with almost 33% previously. The information and communications sector’s contribution to GDP rose to 2.6% from 1.4% as the weighting of telecommunications more than doubled. Real estate now contributes 9.3% compared with 7.2% previously, while transport increased to 10.8% from 8.0%.

After suffering its first contraction in almost three decades in 2020, Kenya’s economy is expected to stage a marked rebound this year and in the years that follow as the economy is reopened and sectors such as tourism are revived. Looking ahead, the increasing prominence of non-traditional sectors is encouraging, especially given the fact that Kenya is already one of Africa’s most diverse economies. That said, we still expect the agriculture sector to remain the biggest contributor to Kenya’s economy. Note that Kenya is the world’s largest exporter of cut flowers and black tea.