Nigeria struggles with Covid second wave and lack of vaccines

Nigeria struggled with the first Covid wave, but the death count and impact on healthcare was not as bad as seen in other parts of the world, or as expected. Although the government was criticised for poor planning and execution of lockdown measures, the efforts combined with demographic factors made the impact less severe as Nigeria recorded low number of deaths.

Now, Nigeria is in the middle of a second Covid wave, which seems to be more daunting than the first. The current daily new cases are more than double that recorded during the peak in the first wave and hospitals as well as isolation centres are filing up faster. A record 2,600 new cases were registered on 11 January, almost three times the high of 904 cases during the first wave. Despite the significant increase, the actual numbers are still very far from reality as the free testing centres are overwhelmed and alternative testing options (priced between US$77-US$115) remain too expensive for the average Nigerian. 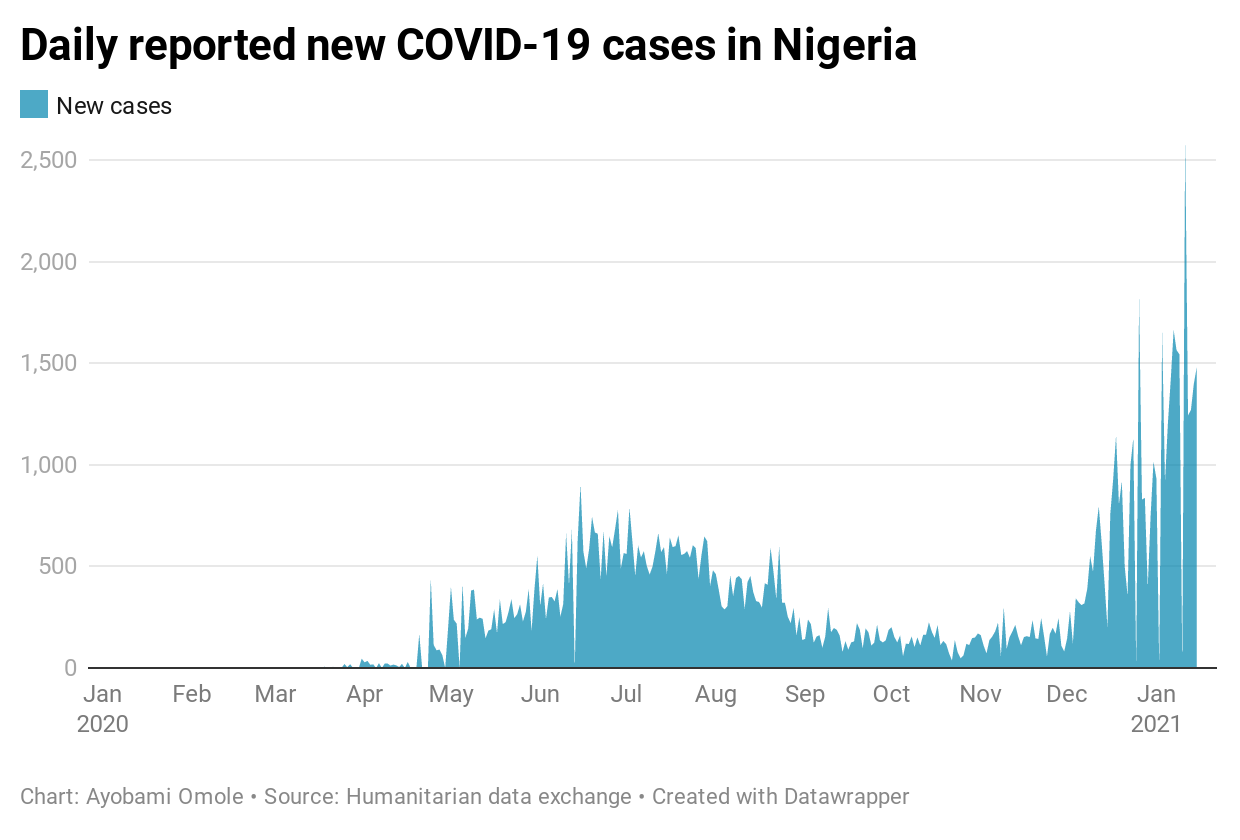 Although the increase in the number of cases and an indication of a second wave started in mid-December 2020, festivities still went on as usual with only Lagos state imposing a midnight curfew. Given the dire economic situation facing the country, Nigeria cannot afford another lockdown right now. A second lockdown will mean more disruption in supply chains, which will further push already high food inflation upwards (currently at 19.5%). Millions of daily wage earners will be put out of work once again. Also, given the poor distribution of the donated relief items during the first wave and the ensuing raid on government warehouses across the country as well as the general distrust towards the government, the risks of civil unrest are higher.

The chairman of the Presidential Task Force (PTF) recently mentioned that the government is doing everything possible to avoid a second lockdown and Nigerians must cooperate in ensuring that the country does not observe another one.

The only way out for Nigeria then, is to secure as many vaccines as soon as possible. With an estimated population of about 200mn, Nigeria will need 280mn doses to immunise at least 70% of the population, to achieve herd immunity. Nigeria has plans to vaccinate 40% of the population in 2021 and an additional 30% in 2022. But while other countries are striking multiple deals with vaccine producers, Nigeria is still shockingly undecided about a suitable vaccine and has not placed any direct orders yet.

We discuss updates on each potential vaccine source below:

Nigeria hopes to get 42mn vaccines from COVAX. Okonjo Iweala, the board chair of the GAVI alliance said that COVAX has been able to secure about 1.9bn doses and 88 countries have put in requests, out of which 44 countries are in Africa. Nigeria and 11 other countries have indicated readiness to receive the vaccine although countries may not get the delivery until late February.

Even then, the delivery of the vaccines is likely to be spread out through 2021 and the 42mn doses will be just enough for about 10-12% of the population if the required double dosage is administered.

The African Union (AU) set up the African Vaccine Acquisition Task Team to drive joint acquisition of vaccines for member states. So far, the union has secured 270mn doses, besides the doses expected from COVAX. Delivery is expected to start trickling in by the end of March and the vaccines will be distributed according to population size of member countries. The African Union has an estimated population of about 1.3bn people. Nigeria, the largest country in the continent, will be entitled to about 15-16% of the vaccines. Recently, Nigeria indicated interest in 10mn doses from the AU and expects that it will be delivered by March.

The AU and the World Bank are also negotiating a US$5bn facility for member states to purchase more vaccines.

Other than the 10mn doses expected from AU and the 42mn doses from COVAX, Nigeria has not placed any direct orders for vaccines so far. The health minister in a recent interview stated that the government is still considering which vaccine will be best suited for the country. From a cost and storage perspective, the AstraZenaca and Johnson & Johnson vaccines are the most suitable for Nigeria.

Although there was a provision of NGN45.2bn (cUS$119mn) for GAVI/immunisation in the 2021 budget, the finance minister stated that the executive and lawmakers are open to preparing and approving a supplementary budget as soon as the type and quantity of vaccines are finalised.

From discussions, it seems like the government is ready to finance the purchase of vaccines, but we are not ruling out the possibility of a segment of the population paying for their own vaccines through a private market arrangement.

Meanwhile, Nigeria is also expecting a delivery of 100,000 vaccines donated by Pfizer/BioNtech to be delivered by the end of January 2021. The vaccines will be administered to health workers across the country.

Recently, Nigeria's vice-president made the case for the local production of vaccines and the Federal Government subsequently released NGN10bn to support it. Unfortunately, Nigeria has not demonstrated the capacity to produce vaccines even with support from international institutions, with the Executive Director of the National Primary Health Care Development Agency going so far as to point out that the country lacked the facilities. The National Vaccine Production Laboratory has been inoperative since the 1990s and the country has not produced any vaccine for humans since then. Although the agency was revamped in 2017 as Biovaccines Nigeria Limited, a joint venture with May and Baker Nigeria Limited, the likelihood of rolling out vaccines via the agency is still very low.

Securing the vaccine is only a small part of the battle

Like most African countries, the effective distribution of vaccines across Nigeria will be a major challenge for many reasons. First, sensitisation efforts need to be increased. A lot of Nigerians still do not believe the virus exists, so mass vaccination drives will be extremely difficult unless sensitisation efforts are increased and tailored to the diverse citizens of Nigeria.

Second, the power crisis in the country and the lack of ultra-low temperature freezers already rule out the use of vaccines that need to be stored at sub-zero temperature like Pfizer (-70 degree celcius), Moderna (-20) and Gamaleya (-18). Even with the low maintenance vaccines, there is still imminent risks in preservation and logistics. The poor road network to rural areas and lack of primary health care facilities in some villages will make vaccine distribution very difficult.

Lastly, there are concerns that the distribution among states might be politicised in terms of allocation. Nigeria does not have a reliable population data, and this could pose a challenge in resource allocation among states. The planned distribution of the vaccines donated by Pfizer has already caused a ruckus, which is likely to escalate as more vaccines arrive.

Overall, it is a long road to mass vaccination in Nigeria and Covid-19 could easily become endemic in the medium term.