The gold market is caught between thoughts of significant central bank tightening to contain the inflation monster against the risk of such actions resulting in recession. The fact of the matter is that the US is already looking like it will be heading into recession and as such pricing for super aggressive monetary policy may be misguided. Given this backdrop, we remain buyers on any dips. In terms of the noble metals, the World Platinum Investment Council has stated platinum’s surplus is “fragile” amid supply risks. “Supply is fairly constrained and you will not see supply from mines growing in the near or medium-term future,” Chief Executive Officer Paul Wilson said at a precious metals conference in Singapore on Tuesday, according to Bloomberg. “What we see in terms of demand growth is really quite exciting. We believe the market is at a turning point.”

Copper gained 2.55% yesterday to close just short of $9750.00/tonne as declining inventories and the hopes of an economic revival in China post the hard lockdowns supported the metal. This morning we have the benchmark 3m LME contract exhibiting a mildly offered tone as a stronger dollar takes the shine off it as we head into the EU session.

Egypt: Finance Minister Mohammed Maait has indicated that the government is considering the issuance of the first sovereign Sukuk. Egypt is seeking to attract new segments of local and foreign investors interested in investing as per sharia law by issuing the sovereign Sukuk. Maait added that the issuance of the green Sukuk and sustainability Sukuk would contribute to cutting the cost of financing and provide the necessary cash to implement development and green projects and investments under the general budget's economic and social development plan. Maait had previously announced that Egypt would issue the first sovereign Sukuk in H2 of the fiscal year 2021/2022.

Kenya: Kenya's electoral body has cleared the main presidential candidates in the August 9 polls. William Ruto, the sitting deputy president who is running on a Kenya Kwanza ticket (Kenya first) coalition of political parties, will contest with Raila Odinga, who is running under Azimo La Umoja (Resolution for Unity), a coalition of more than 20 political parties. Whoever succeeds President Kenyatta will have to contend with a growing debt burden exacerbated by the coronavirus pandemic and may have to deal with the aftermath of a potentially divisive election. While President Kenyatta's infrastructure spending has bolstered the country's economy, it has come at a high cost to its fiscus. Key fiscal metrics such as debt to GDP and debt servicing costs to GDP have risen sharply under the Kenyatta administration, to the point where credit rating agencies and international lenders, including the  International Monetary Fund, have warned that Kenya faces a high risk of debt distress.

Malawi: The International Monetary Fund yesterday said that it had productive discussions on policies needed to restore macroeconomic stability, ensure public debt sustainability, and advance structural reforms to support sustainable and inclusive growth and address the impact of the Covid -19 pandemic, spillovers from the war in Ukraine and climate-related shock with Malawi. The IMF added that Malawian authorities have engaged a debt adviser to support their efforts to address the unsustainability of Malawi's public debt.

Tanzania: At yesterday's meeting, the Bank of Tanzania pledged to maintain its accommodative policy stance in May and June. The decision was informed by the need to safeguard the recovery of economic activities and the projected inflation within the target. However, the central bank said that it would monitor the risks to inflation and recovery of the economy arising from high world commodity prices and take appropriate measures, including a gradual reduction of monetary policy accommodation.

Botswana: The political backdrop is becoming increasingly tense with the current administration and the previous President, Mr Ian Khama, at loggerheads over various issues. The country’s prosecuting authority stated yesterday that it is considering applying for the extradition of Mr Khama from South Africa after he failed to appear in court for a second time for his trial on firearm charges. Mr Khama has been in a self-imposed exile in South Africa since November 2021, citing fears for his safety. Mr Khama and his co-accused, who include the former heads of intelligence and police services, face more than 30 charges, including theft and the unlawful possession of firearms. The ex-President has stated he would welcome the extradition request and that the state should press ahead with it. There is always the risk of something as sensitive from a political aspect as this turning into a media farse which would potentially undermine Botswana’s image on the international stage. We expect all those involved to tread carefully in the coming weeks.

Foreign currency reserves play an important role in cushioning against immediate liquidity constraints and a currency’s ability to withstand shocks. It is, therefore, worth taking a look at the latest reserves data out of Egypt. Egypt’s net international reserves fell for the second time this year, coming in at $35.5bn at the end of May from $37.1bn in April. According to the Central Bank of Egypt (CBE), the decline was a result of an external debt payment of about $2bn. Amongst other obligations, Egypt in May paid the coupon on its sovereign Eurobonds as well as the principal and interest debt owed to the International Monetary Fund. Note that Egypt’s reserves are down nearly $5.5bn since the end of last year after also falling in March. 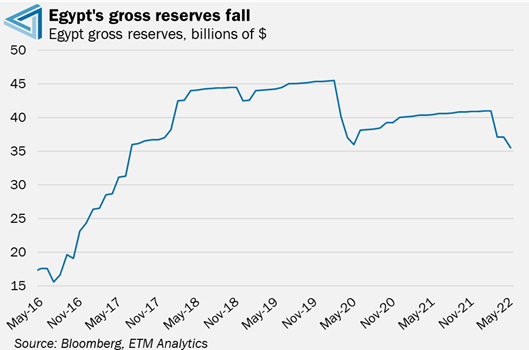 Despite the fall in May, the CBE indicated that the remaining holdings are “within all adequacy measures” and cover five months of merchandise imports. Egypt’s reserves are in the limelight after ratings agency Moody’s in May warned of “a significant narrowing in the foreign-exchange reserve buffer to meet upcoming external debt service payments.” Due to the war in Ukraine and Egypt’s significant exposure, Egypt has experienced foreign outflows of around $20bn from the local debt market in 2022.

If persistent, declining reserves and foreign currency outflows are likely to place further pressure on the Egyptian Pound, which remains one of the worst-performing African currencies on a year-to-date basis. The EGP has lost almost 16% and is the fourth worst-performing among the 23 currencies tracked by Bloomberg. Much of the weakness has come on the back of the more than 15% devaluation by the CBE on March 21.

Unsurprisingly given the deterioration in market conditions, Nigeria has shelved its plans to raise $950mn in the international bond market. Recall that Finance Minister Zainab Ahmed said in April that the government was planning to sell its second Eurobond this year to help plug its budget shortfall. Nigeria was the first African nation to tap the Eurobond market in the wake of the Ukraine-Russia war, raising $1.25bn in the international bond market in March.

The planned $950mn bond sale was set to make up the balance of the $6.1bn of international borrowing planned for the 2021 fiscal year. Finance Minister Zainab Ahmed said on the sidelines of a meeting in Egypt that “we were not able to do that because the market pricing was not good and also the approval period for us has closed. The approval period was up to May 31, 2022, so we are not going to be able to take that one anymore.” 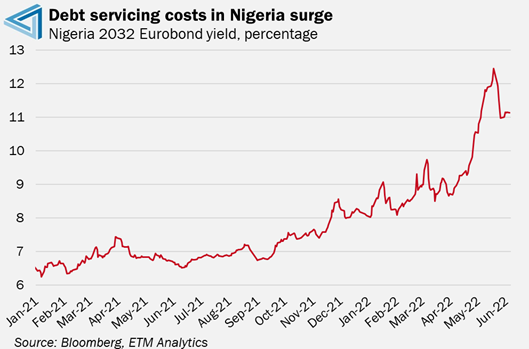 While Nigeria’s overall debt pile is modest compared to many of its peers, the oil-producing nation has one of the highest debt-servicing-to-revenue ratios in the world. As such, the government plans to curb borrowing costs by using the International Monetary Fund’s general allocation of reserves known as special drawing rights to fund projects. Moreover, the government plans to reduce external borrowings. The Finance Minister said, “what we are doing now is to plan on managing our situation such that we are not exposed to increased costs in 2022. We are hoping that in 2023 things will be much better than what we are projecting in 2022.”

While it is encouraging that the Nigerian government is looking to rein in its debt servicing costs by using bilateral loans, we remain cautious of turning bullish on Nigerian bonds just yet. We would need to see concrete evidence that the government is implementing measures to rein its debt servicing costs while at the same time boosting revenues. Notwithstanding surging international oil prices, Nigeria has a massive tax revenue problem, with the country’s tax-to-GDP ratio, at 6%, being one of the lowest in Africa.

Macroeconomic: The pace of economic recovery in Sub-Saharan Africa slows in May

Monday saw the last of the May African PMI releases, which we use as a high-frequency gauge of economic health. PMIs in Sub-Saharan Africa broadly fell in May, with the headline readings for Ugandan, Kenya, Nigeria, Ghana, Zambia and Mozambique all dropping on the month. As such, the SSA PMI average fell from 51.4 in April to 50.6 in May, its lowest level since August 2021. While the gauge edged lower in May, it must be noted that it remains buoyed above the 50-point mark in expansionary territory. 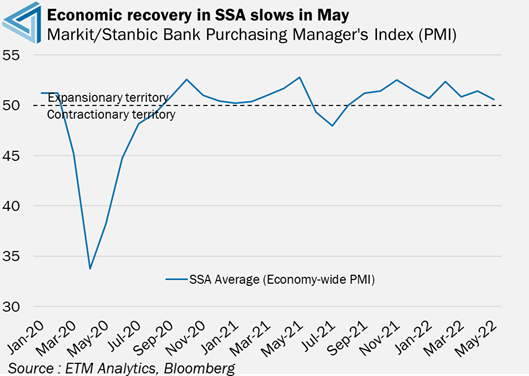 The biggest decline was in Uganda, with its headline PMI reading falling 2.4 points to 51.5. While the gauge fell notably, it signalled an improvement in business conditions for the tenth month running. Details from the report revealed that ongoing increases in output and new orders were registered in May, with both rising for the tenth month running. Respondents noted that while, on balance, customer demand continued to improve, there were some instances of price rises deterring clients. Companies remained optimistic in the 12-month outlook for activity, with positive sentiment based on predictions of new order growth and hopes for an alleviation of price pressures.

South Africa was the only SSA country to record an increase in its headline PMI reading, up 0.4 points to 50.7, as improving conditions in KZN helped lift overall demand. Still, SA’s economy continued to face headwinds from load-shedding, higher manufacturing costs, weak export sales and ongoing supply disruptions. Business confidence about future economic activity dropped to its lowest levels since July 2021. Fears of strong inflationary pressures are partly offsetting optimism of strengthening demand as the economy continues with its post-Covid recovery.