Nigeria: Request for emergency IMF financing a sensible move, but is it enough?

The IMF stated last night that Nigeria has made a formal request for support under one of the Fund's emergency financing facilities. Nigeria has sought support under the Fund's Rapid Financing Instrument (RFI), one of the two enhanced emergency financing facilities (RFI/RCF) that the Fund has made available to help countries at this time. The IMF statement confirmed media reports earlier this week that Nigeria would make such a request. The IMF Board is expected to consider Nigeria's request as soon as possible.

We think this is a sensible move. Nigeria follows a host of other countries that have made similar requests, including Rwanda (already approved), Senegal (approval pending), and Ghana (approval pending). Hence it is in good company and there should be no stigma attached to it. These emergency facilities have no conditionality (unlike a proper programme), are quickly disbursing and are offered on highly concessional terms, although access is relatively low (100% of quota). Hence, we reckon Nigeria might be able to get up to US$3.3bn under the RFI. According to media reports, Nigeria is also seeking US$2.5bn from the World Bank and US$1bn from the AFDB. So that's nearly US$7bn altogether.

But this is not an IMF programme, and the Nigerian authorities have ruled out requesting one, presumably because they don't like the conditions that would come with it. Nigeria's reluctance to consider a proper IMF programme now is unsurprising given their historical aversion to one, based on past experience (under this government and its predecessors). For example, there was no such request during the global financial crisis or more recently during the 2014-16 oil price collapse when Nigeria last came under intense BOP pressure. But an IMF programme may help better to support investor confidence and cover balance of payments (BOP) needs. Financing under a proper IMF programme would typically be even larger than available under the emergency facilities; the normal access limit under a standby agreement (SBA) for instance would imply an amount of up to cUS$15bn (although clearly access would depend on each country's individual circumstances and needs at the time). However, an IMF programme would come with conditions, which no doubt the government wants to avoid. In Nigeria's case, we think the main focus of any programme would be on exchange rate management and a move to a more flexible, market-determined exchange rate; which likely implies further devaluation.

Yet we think Nigeria's reticence towards on an IMF programme may come under pressure. Our analysis suggests that the loss of oil export revenues from lower oil prices could amount to up to US$17bn, assuming US$35/bbl oil, which is about half of current reserves (official reserves were US$34.7bn on 6 April, according to the CBN). However, this may overstate the actual BOP impact given it is based on a static approach and ignores any offsetting policy measures. Nigeria has already devalued its currency (both the official rate and the market (I&E) rate by 15% and 4% respectively on 22 March), announced a number of other policy measures and is working on an economic stimulus package. However, the situation may still not be tenable. We think further devaluation is likely under current circumstances, although the government may prefer instead to return to a world of capital controls and multiple exchange rates, which it will argue served it very well before. But could the fact that the authorities reacted so quickly in response to this shock (devaluing and seeking IMF emergency financing) suggest (optimistically) that policy thinking is evolving?

Equity strategy: Nigeria equities are very cheap but, for foreign investors, the risk of capital controls outweighs this. The admission that the fiscal budget needs to be reviewed, devaluation of the Naira (albeit relatively small), narrowing of the gap between the official rate and the Investor and Exporter window, approach to bilateral creditors for payment relief, and the request for IMF assistance all suggest that the authorities are recognising the scale of the economic shock presented by the oil price collapse and Covid-19, and attempting to deal with it.

Foreign equity investors are comfortable pricing in the risk of further FX rate devaluation. But they cannot tolerate de facto capital controls which lock up a part of their portfolio (which inhibits accurate valuation of the portfolio and forces a disproportionate sale of positions in markets where repatriation is not constrained). Therefore, the sole issue of importance for them is whether the prospect of de facto capital controls is less likely as a result of the approach to the IMF.

Those investors who survived the trauma of the last oil price crash in 2014-16 recall that Nigeria flirted with the IMF through that crisis but did not implement a fully flexible FX rate regime. Instead, devaluation occurred in several stages and de facto capital controls (very long delays in repatriating liquidated positions, the emergence of a very wide parallel FX market discount) were a painful feature of that period.

Given the policy mindset throughout President Buhari’s first and, so far, second term in office, of prioritising official FX rate stability over all else (evidenced by high interest rates, import restrictions, border closures, and the use of FX reserves to defend the FX rate) they will need a lot of convincing that capital controls risk is off the table. The request to the IMF may be a signal that Nigeria is going to seize the crisis to enact long-standing change on the FX regime but most foreign investors in local equities will need to see this happen first (i.e. an IMF deal with a flexible FX rate regime as one condition). 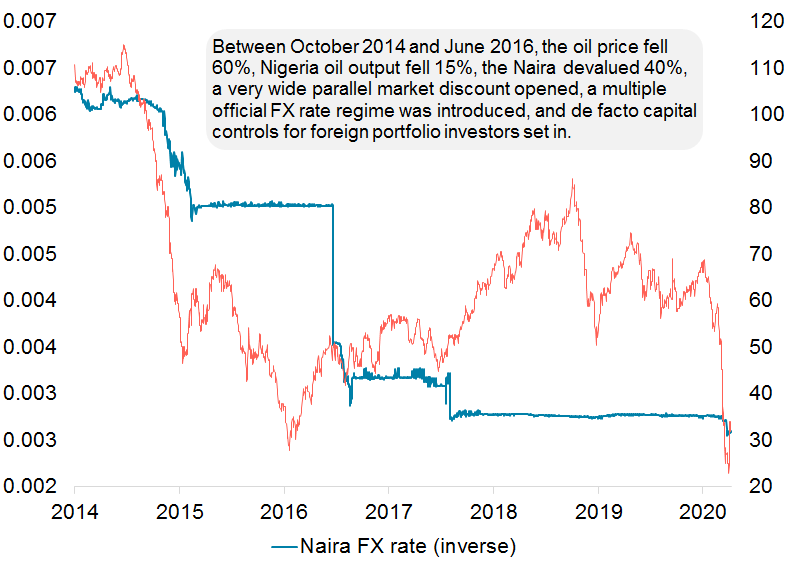 For foreign investors wishing to access underlying Nigeria exposure without the repatriation risk in local equities, the liquidly traded options are mobile telecom operators MTN Group (listed in Johannesburg) and Airtel Africa (listed in London), where Nigeria drives about 40% and 50% of EBITDA respectively, and e-commerce play Jumia (listed in New York), where Nigeria accounts for about 30% of gross merchandise value. Upstream oil producer Seplat is dual-listed in London and there are London GDRs of two of the banks, Guaranty Trust and Zenith, but all of these are too illiquid for most funds.