China remains the focal point from an international perspective given the impact that the potential collapse of the Evergrande Group will have on the price of base metals and sentiment in general. News vendors have focused on this topic since the start of the week with analysts unpacking the various permutations and impact it will have on the market. To date the group has some $300bn worth of liabilities and there is a strong chance that the Chinese government will need to step in with a bail-out. The contagion risk is high given how the Chinese property sector is so intertwined into global raw material supply chains.

Leaders on the continent this week met to discuss ways to minimise the impact of climate change. Africa generates about 3% of global greenhouse gas emissions, the lowest of any continent. But it is more vulnerable than any other region in the world since it is heavily reliant on the natural environment for food, water, and medicine. Speaking at the virtual conference, Nigerian Vice-President Yemi Osinbajo said that African governments need to keep the climate in mind as they try to boost their economies. The Center for Research on the Epidemiology of Disasters reported that in 2019, Africa recorded 56 extreme weather events compared to 45 in the previous year. We expect climate change to become a more prominent talking point in Africa, given the impact it is having on the continent.

Nigeria: The Central Bank of Nigeria is expected to leave its benchmark interest rate unchanged for a sixth meeting today to support economic growth, which undershot expectations in Q2, suggesting the economy is struggling to recover from its biggest contraction in almost three decades. Inflation which slowed for a fifth straight month, will further support arguments for a hold. However, it is worth noting that it remains buoyed above the upper band of the CBN's target of 9%. That said, Governor Emefiele has said that the declining inflationary trend reflects measures implemented by the government, and going forward, the pace of inflation is expected to fall further as Nigeria approaches the harvest season.

Kenya: Speaking to lawmakers, Controller of Budget Margaret Nyakang'o said that Kenya has been borrowing locally to settle commercial debt and issued KES 15bn of Treasury bonds in August to repay a syndicate loan. About KES 14.7bn of the bond proceeds went to a TDB syndicate loan. Nyakang' o added that there was no tax revenue to meet obligations, and by end-June, the government had paid KES 1.66bn as commitment fees on unutilised loans to state-owned entities, including Kenya Power. Nyakang'o also noted that part of the proceeds of an infrastructure bond that raised KES 70.2bn last year were spent on recurrent expenditure in contravention of public finance law. In August, Treasury reported that it had spent around 19% of borrowed resources in the 2020-21 fiscal year on recurrent expenditure.

Uganda: Data from state-run coffee Uganda Coffee Development Authority yesterday reported that coffee exports rose 35% on the year in August, extending a rising streak into the closing month of 2020/21 season. This as maturing plantations and favourable weather, boosted yields across the country. Exports jumped to a record 700,990 60-kg bags, up from 519,683 bags exported in the same month last season. August's shipments brought the cumulative 11-month exports for the season to 5.9mn bags, a 22% jump compared with last season. Shipments have been rising over the past seven months, signaling the success of Uganda's coffee-growing campaign as the country continues efforts to increase annual coffee production to 20mn bags by 2025.

Equatorial Guinea: The International Monetary Fund has said that Equatorial Guinea must step up efforts to combat graft to secure additional funding. In a statement released yesterday, the IMF said, "the COVID-19 pandemic and the Bata explosions have inflicted heavy damage on Equatorial Guinea's economy and have increased external financing needs" and its projections show that the country will need an additional $625mn in balance of payment support. However, the IMF indicated that more funding will be contingent on the government implementing reforms. According to the IMF, the government needs to follow through on a commitment to compel senior public officials to declare their assets as part of a $280 million IMF support package in 2019 and publish a list of state assets earmarked for privatisation and set out plans to establish an anti-corruption commission as soon as possible.

Democratic Republic of Congo: PM Jean-Michel Sama Lukonde's government has submitted a CDF 20.7trn ($10.5bn) budget to parliament for next year. The proposed budget is 42% bigger than the 2021 budget and mainly focuses on security, health, and education, and supports a new census and elections in 2023.

Zimbabwe: To deal with power shortages that have resulted in rolling blackouts for around 12 hours a day in the country, Zimbabwe has asked Mozambique and Zambia to supply it with more electricity. Energy Minister Soda Zhemu was quoted as saying, "we are in discussions with Mozambique for the recently commissioned power plants to give us an additional 180 megawatts. We are also at the final stage of discussion with Zambia to get an additional 100 megawatts."  Rolling blackouts threaten to derail productivity in the country which will weigh on economic recovery prospects.

Dollar scarcity following the Central Bank of Nigeria’s move to channel demand for dollars onto official platforms has seen the Nigerian Naira on the parallel market continue to reach fresh lows this week. Yesterday, the Naira plunged to a new low of NGN 565 to the dollar, according to Abokifx, an online platform that tracks the data. That was a spread of around 37% from the official spot rate of NGN 411.90 on Thursday. 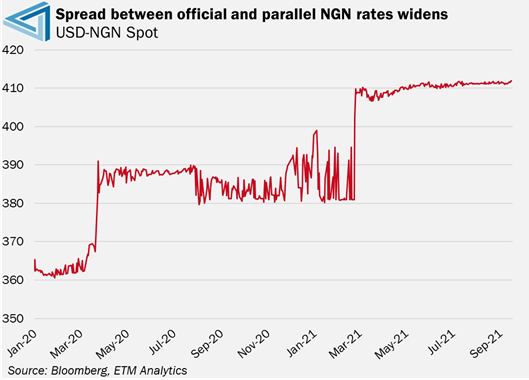 Individuals and firms have been forced to turn to unauthorised dealers to meet their foreign exchange requirements as a result of dollar rationing. This has led to the hoarding of dollars and a creation of shortages, driving the parallel rate to a record low. The weakening will not have gone unnoticed by policymakers at the CBN. There is growing market expectation that they will announce measures to stem the decline in the Naira, even if it keeps the policy rate unchanged for a sixth straight meeting today. Therefore, investors and firms are set to focus on the steps the CBN takes to bolster dollar supply. Note that the International Monetary Fund’s allocation of special drawing and Nigeria’s plan to raise as much as $6.1bn from overseas is potentially seen as providing policymakers with ammunition to boost supply in the official market.

It is worth noting that the CNB has made some currency moves in recent months. These include merging the rate for government transactions with a market-determined rate for investors and exporters in May, halting the auctioning of dollars to money changers in July, stopping dollar arbitrage with name and shame rules, and plans to investigate foreign-exchange transactions of lenders in September. To date, none of these measures have been effective, and thus interventions to boost dollar liquidity are crucial to combat the Naira decline in the unauthorised market.

Fixed Income: Nigeria is in the spotlight as it readies to issue its first Eurobond since 2018

All eyes are on Nigeria as it readies to sell its first foreign currency sovereign bonds in 3 years. Nigeria has mandated Citi, Goldman Sachs International, JP Morgan and Standard Chartered Bank as International Bookrunners and Chapel Hill Denham as the Nigerian bookrunner to arrange a global investor call today at 13.45 UK time. The government is expected to offer 7-year, 12-year, and 30-year or 40-year USD denominated bonds.

Fitch has assigned Nigeria’s proposed USD bonds to be issued under its Global Medium Term Note Programme a B rating. The rating is in line with Nigeria's Long-Term Foreign-Currency Issuer Default Rating. Recall that on 19 March, the global ratings agency affirmed Nigeria's rating at B with a stable outlook. In its March rating update, Fitch said that Nigeria could face negative rating action if the government fails to address weaknesses in the fiscal policy framework, illustrated by a reinstatement of the fuel price subsidy or continued large central bank financing of the sovereign, particularly if it exceeds institutional safeguards. Significant intensification of external liquidity pressures, such as a rapid drawdown in reserves or renewed downturn in oil prices, would also result in negative rating action.

Fitch noted that stronger resilience of external finances from a durable recovery in international reserves or resumption of current account surpluses and exchange-rate regime reform addressing Nigeria's ongoing external vulnerability meanwhile could lead to positive rating action. While the recovery in oil prices and Eurobond issuance should help bolster Nigeria’s reserves position, we assess credit rating risks to be skewed to the downside. 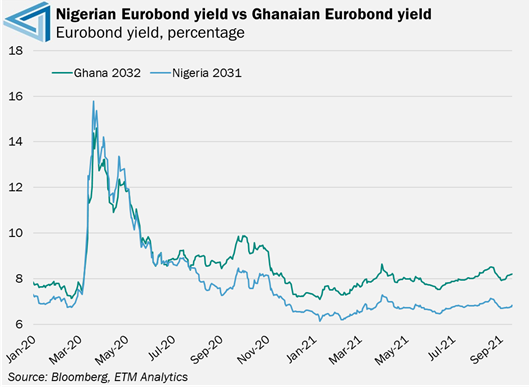 While fiscal risks in Nigeria remain elevated, it is worth pointing out that Nigeria’s 2031 Eurobond yield is trading well below similarly rated Ghana’s Eurobond yield. This suggests that investors are demanding less of a fiscal premium for holding Nigerian hard currency debt than Ghanaian hard currency debt. As mentioned in recent commentary, although Nigeria has one of the highest fiscal revenue to debt servicing ratios in the world, its overall debt pile is lower than many of its peers. This, together with the recent rebound in oil, partly explains Nigeria’s lower fiscal premium.

In line with expectations, policymakers in Egypt voted in favour of leaving the benchmark interest rate on hold despite rising inflation. Specifically, the central bank left the benchmark deposit rate at 8.25% and the lending rate at 9.25%. Note that this is the seventh consecutive meeting that policymakers have held following a combined cut of 400bps in 2020. 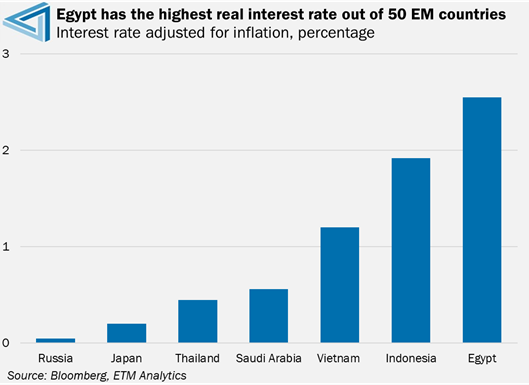 While inflation in Egypt has trended higher, the decision from the central bank to leave rates on hold means that Egypt maintains its title as the country with the highest inflation-adjusted interest rate of more than 50 emerging market countries tracked by Bloomberg. Note that some African countries, such as Mozambique, do have higher real interest rates. However, these markets are not as developed and as tradable.

The fact that Egypt’s real interest rate remains amongst the highest in a world where investors are on the hunt for yield, given the low interest rate conditions in the developed market space, suggests that Egyptian debt remains highly attractive to foreign investors. That said, both the Central Bank of Egypt and investors will be closely monitoring monetary dynamics in the US, as a taper in the US would offer increasingly competitive yields for investors, weighing on the attractiveness of higher-yielding emerging market debt.