US Treasuries ended yesterday’s session cheaper across the curve, with the topside pressure on yields provided by a slate of IG issuance that came amid thin trading volumes. However, UST futures are rebounding this morning, taking benchmark 10yr yields back below the 3% level, which seems to be the number at which buyers enter the market amid fear of missing out on such attractive yields. US growth con-cerns will also be keeping a lid on longer-dated yields for now. Although the economy has so far held up well, the outlook is deteriorating more and more the longer inflation levels remain stubbornly high, and the Fed is forced to hike rates aggressively. This speaks to a higher probability of what is being referred to as a hard landing for the economy, which could be plunged into a recession as soon as next year. Therefore, it is no surprise to see that longer-dated yields are struggling to surge.

Over in Europe, bunds weakened on the session yesterday amid an improvement in risk appetite, while Italian debt stabilised as investors wait to see what will happen with the governing coalition. This saw the BTP-Bund spread snap five days of widening and drop by the most in four weeks. Given the shift to risk-off conditions overnight, however, we expect to see a rebound for bunds today, which could result in BTPs coming under a bit of pressure once again.

Nigeria: The Central Bank of Nigeria is set to deliver its latest interest rate decision today. The odds are stacked in favour of the central bank hiking rates given robust inflation, FX pressure, and prospects of a sharper interest rate hike by the Federal Reserve this month. That said, an outside risk exists that the CBN could opt to keep the policy rate unchanged, providing policymakers more time to assess the impact of the 150bps rate hike in May.

Egypt: Speaking yesterday, President Abdel-Fattah El-Sisi said that Egypt stands ready to play whatever role it can to ease the current Euro-pean gas crisis. The president added that with all the current gas liquefaction stations, Egypt “could export all the natural gas it can produce from the Eastern Mediterranean.” As Russia has reduced gas supplies to Europe and Europe seeks to limit its dependence on Russian gas, Africa has an opportunity to fill the gap. That said, countries on the continent may need to act swiftly before a longer-term shift to low carbon energy limits Europe’s appetite for fossil fuel.

Tanzania: The Bank of Tanzania (BoT) yesterday reported that the value of gold sold by Tanzania rose 22% in the first three months of 2022 compared to the same period last year, rising to TZS517.8bn ($222.9mn). According to the BoT, the rise in the value of gold sold, which accounted for 94.3% of total mineral sales during the reviewed period, was a result of a rise in both volume and price. The rise in the gold price reflects increased demand in the world market partly due to geopolitical tensions following the war in Ukraine. The BoT did, how-ever, not disclose the volume sold.

South Africa: In the FX market, we are witnessing consolidation above the R17.00 mark for the rand this morning. Investors are remaining sidelined ahead of what can be termed a pivotal week, with the South African Reserve Bank announcing its verdict on rates this Thursday in conjunction with the Bank of Japan and the European Central Bank. We also have the release of the local CPI reading for June tomorrow, market expectations are for a print of 7.3% year on year against a previous reading of 6.5% which will set the tone going into the SARB meeting on Thursday. The market consensus is for a 50 bp hike on Thursday but the risk is skewed towards the SARB acting more aggressively with 75 bps not out of the question.

The first trading session of the week saw the Egyptian pound weaken to close at the lowest level since June 1993, when Bloomberg started compiling the data. The pound closed just above 18.900 per dollar, extending its year-to-date drop to over 20%, making it one of the three worst performing African currencies against the dollar in 2022. Only the Ghanaian cedi and Malawian kwacha have fared worse than the pound on a year-to-date basis among those tracked by Bloomberg.

While much of the pound's weakness this year can be attributed to the devaluation in March, the recent decrease in the country's foreign exchange reserves and the impact of the war in Ukraine on the global market and commodity prices have added additional downside pressure on the currency. Recall, the latest data showed that Egypt's foreign currency reserves fell for the third time this year, coming in at $35.5bn at the end of May from $37.1bn in April. Furthermore, Egypt's reserves are down nearly $5.5bn since the end of last year.

With the war in Ukraine persisting and the Federal Reserve expected to increase its pace of policy tightening, risks of further capital outflows in Egypt exist. Capital outflows and declining foreign exchange reserve levels could therefore continue to pressure the pound in the near-term. 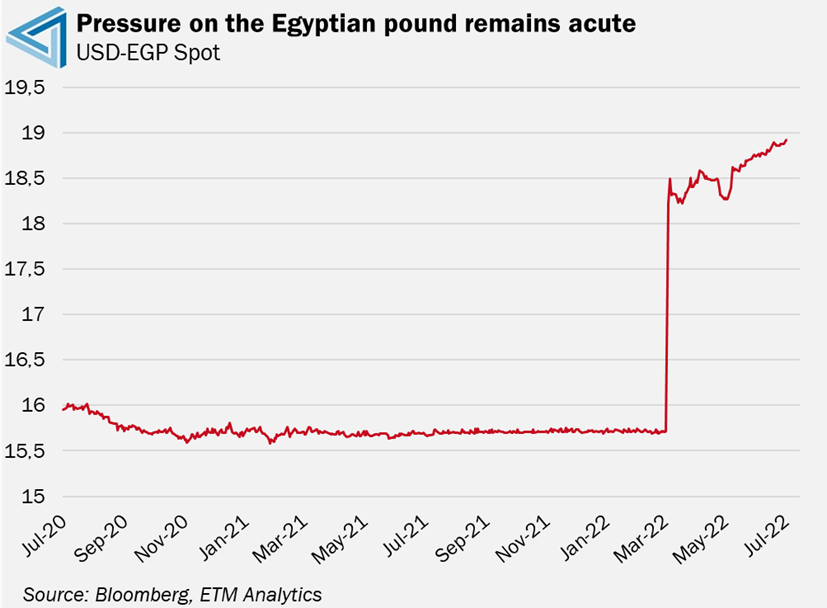 Notwithstanding a minor rebound yesterday, Ghana’s Eurobonds have been under significant pressure in recent weeks, with the sell-off gaining even more traction over the last few days as investors fret over what an IMF deal would mean for the country. Yield on the country’s Eurobonds maturing in 2026 has soared to over 20.00% as a result, while the 2032 tenor has seen its yield recently top 20.85%, both reaching their highest levels since they were issued.

A deal with the IMF will be the second in just three years for the African nation and reverses the stance of the government, which just recently doubled down on not wanting to ask the multilateral lender for assistance and instead rely on its own economic reforms to support the economy and prevent a debt crisis.

The IMF has said that it would hold discussions with Ghanaian authorities over the coming weeks in order to finalise details on a support program that could total as much as $1.5bn. Investors will be eyeing any newsflow regarding these discussions closely, with any mention of debt restructuring likely to weigh further on Ghana’s euro bonds over the near term.

The question now becomes whether or not current levels, or perhaps yields at slightly higher levels, make for an attractive entry point into Ghanaian bonds. Ghana’s bonds trade at a notable discount when compared to similarly rated bonds from African nations, and even lesser rated countries such as Mozambique.

However, the uncertainty surrounding an IMF deal and Ghana’s ability to meet the requirements that come with such a program will keep a notable discount entrenched in the market for at least the next few months. Beyond that, the outlook will depend on the effectiveness of the IMF program in delivering a more sound fiscal backdrop. As we have seen recently, it has become all the more difficult to achieve such a target as social pressure often trumps the need for fiscal reform in times of soaring inflation and rising poverty. 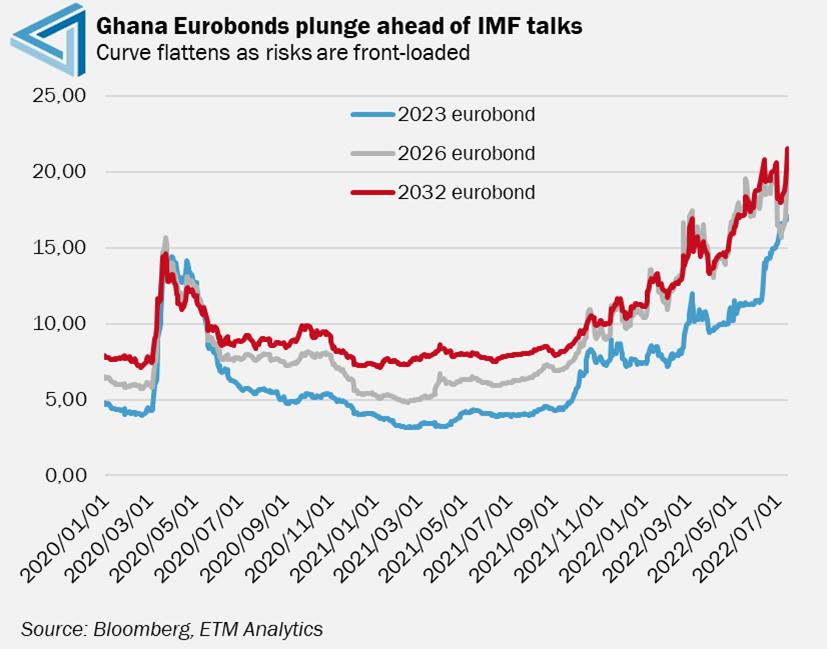 Macroeconomic: Container shortage likely to continue to hurt Africa from both sides

International container shipping prices are expected to fall slowly over the coming year. However, they are unlikely going to return to pre-pandemic levels, and normal ocean freight conditions are neither expected to reach levels seen before the pandemic. Although inflation and record-low consumer confidence have been exerting downward pressure on ocean rates, container rates have remained high because of the imbalance of trade during Covid-19 that resulted in severe container shortages, which have not been rectified.

The container shortage has been even worse for refrigerated containers due to the huge difference in imports and exports of agri-food commodities between regions. The majority of the refrigerator containers are stuck in Asia as they are one of the largest importers, while exporting regions such as South America and Africa are experiencing a shortage. Meanwhile, it has been reported that congestion in some of the main global ports is once again hitting peaks. The high chance of bottlenecks is likely to be another factor that could push commodity prices higher, contributing to higher inflation and shortages of goods, especially those requiring refrigeration such as food.

The impact of this on Africa is twofold. First, rising shipping prices will increase input costs of food and fuel, which is likely to increase consumer prices in general. Secondly, if there is a shortage of containers, then the major exporting countries in Africa will be unable to export their fresh produce. Therefore, the revenue they receive from exports will decrease, meaning negative pressure on trade and government fiscal balances, and therefore, a higher possibility of currency weakness. 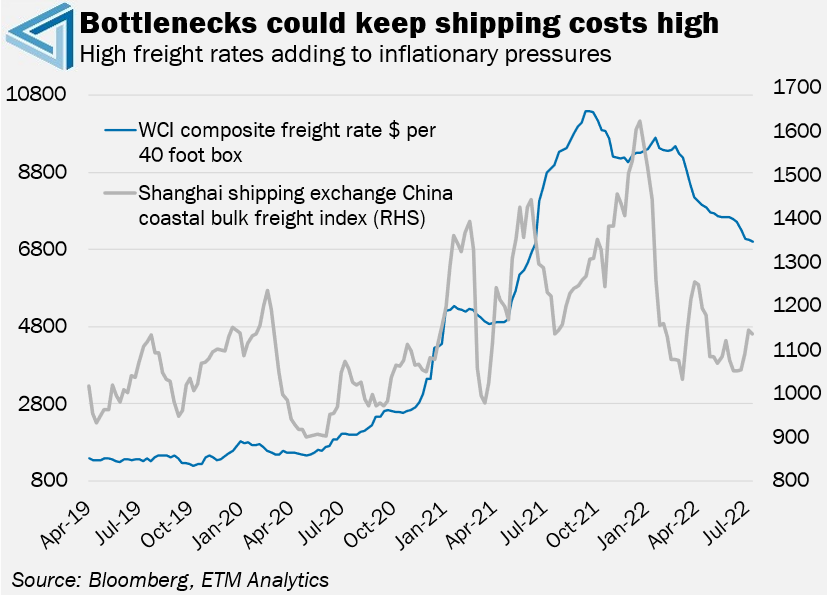